A group of young athletes curling out of Langley are well positioned to take the national junior championship for the third year running – something never before achieved.

This Langley-based team is at the New Holland Canadian Juniors in Prince Albert, Sask. this week, hoping to defend the national title that Team Tardi has held for the past two years – but with a different mix different players.

Tardi and Middleton have two consecutive national and a world championship behind them. Hall and Horvath are new to the team this year.

Nevertheless, this quartet is enjoying the synergy of a well-seasoned team, and that was apparent Tuesday night when they defeated Alberta 9-6. Alberta’s team, led by skip Desmond Young, conceded victory to the Tardi squad in the ninth end.

With that victory, Team BC is sitting 6-0, topping the leader board in Pool A, and in good position to achieve their goal.

That said, Tardi was quick to emphasize: “We are taking each game, one step at a time.”

Team BC won its first game against the Yukon on Saturday, 10-2, followed by a victory that night over Nunavut, 14-1.

On Sunday, they captured their third win, that one over Saskatchewan, 5-3. Then, they went on to down Newfoundland and Labrador, 12-4, on Monday.

And Tuesday morning, Tardi and his team from B.C. dominated Ontario from the start, ultimately winning 12-2.

“It’s a long week, but we are excited to keep going,” Middleton interjected.

And, after Tuesday morning’s game against Sam Steep’s team from Ontario, 21-year-old Hall of Cloverdale, was cautiously optimistic of the team’s prospects.

“I think we’re playing really well in the first few ends of all our games and that’s really helping us continue to gain momentum throughout the week, so far,” he told Black Press Media.

“I’m feeling confident and ready to make a push towards the end of the week, as we try to push for a playoff spot.”

Tardi was optimistic, but not wanting to get ahead of himself.

“We are playing well,” Tardi said.

“But there’s a lot of curling left to do, so we are just taking it slow. One goal at a time. Hoping we can keep it going and make it one step closer to our goal.”

The local team is one of 14 men’s and 14 women’s teams competing, with the two seven-team pools in each gender now wrapped up.

The top four teams from each pool moved into the championship pools that began Wednesday. Tuesday’s win for Team BC secured their spot.

The semifinals are Saturday and the finals are on Sunday. The same games also will be streamed live in the U.S. on ESPN3. CLICK HERE for streaming and broadcast information.

The winning teams will represent Canada at the 2019World Junior Championships, running Feb. 16 to 23 , in Liverpool, N.S.

People can find all the scores and standings by linking to the scoreboard on the event website, at: www.curling.ca/2019juniors. 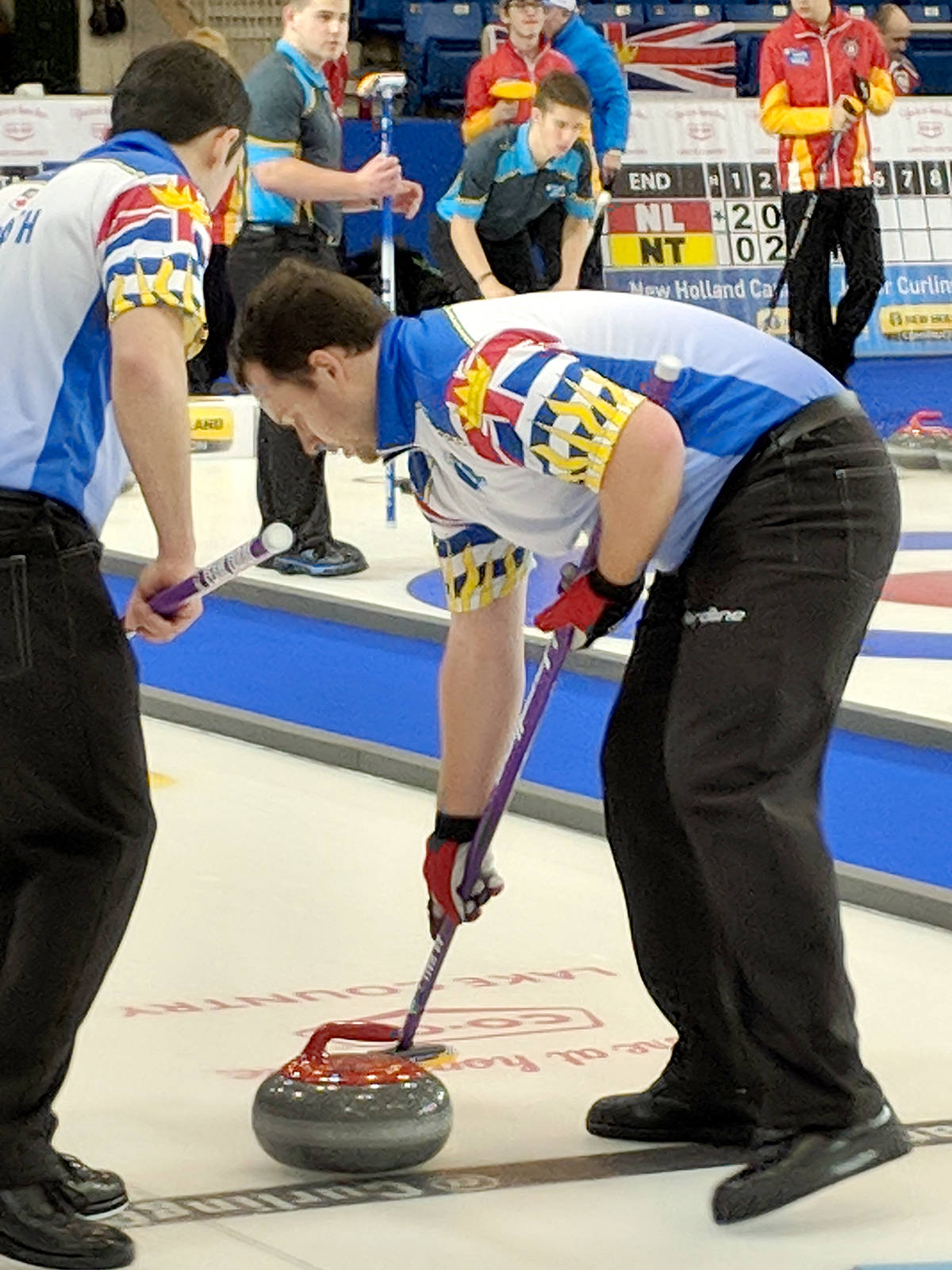 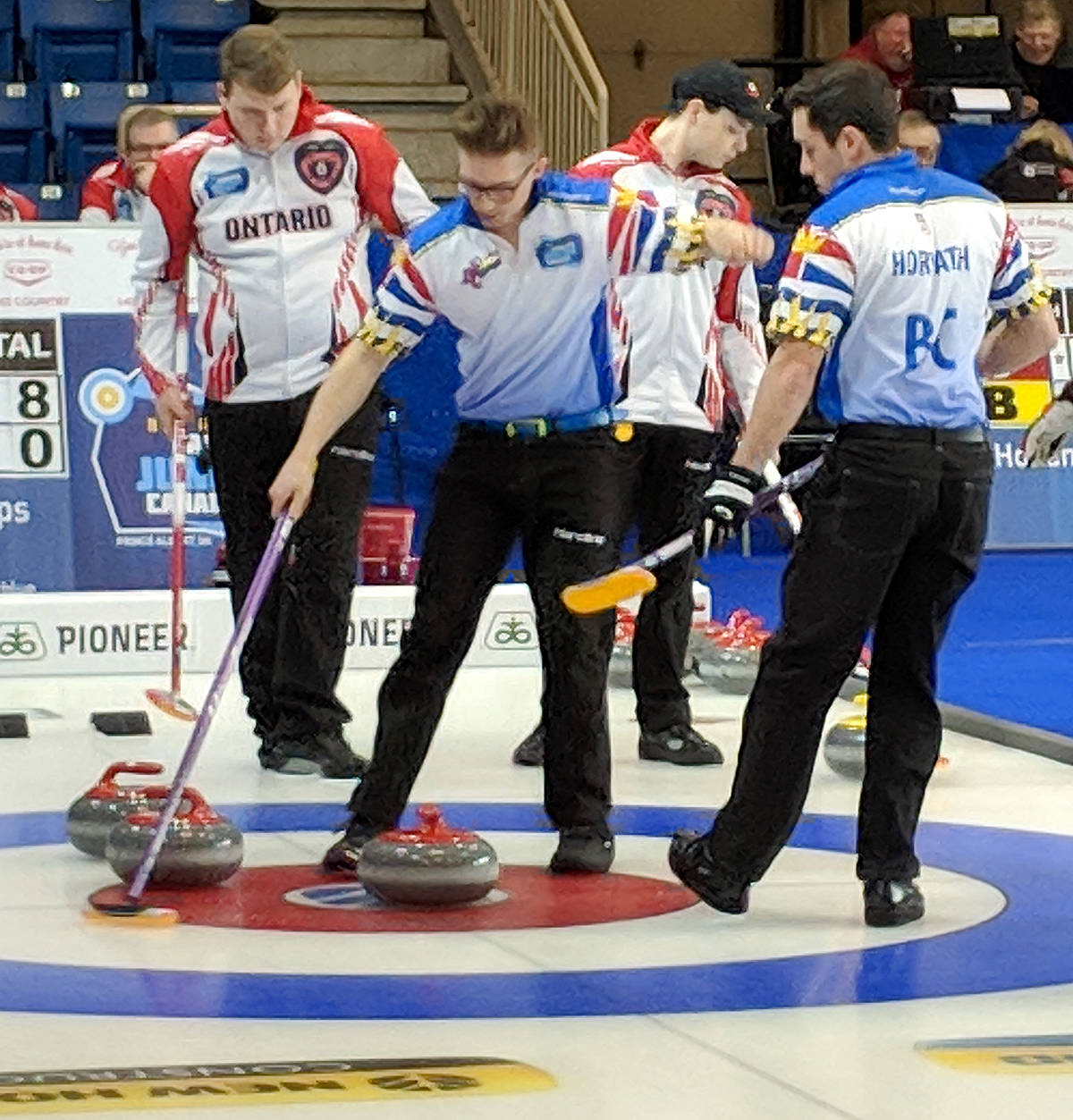 Langley Olympians swimmers have been busy since New Year’s