It’s a good bet that Victoria Royals goaltender Griffen Outhouse didn’t dream of sugar-plums dancing in his head early Saturday morning, even with Christmas just around the corner.

No, he likely dreamt of black, a whole lot of black, reliving the wave after wave of Vancouver Giants attackers that bore down on him most of Friday night at the Langley Events Centre.

In a dominating performance that belied the final score, the Giants levied 37 shots on Outhouse in a 3-1 victory before a relatively sparse crowed of 3,072 fans at the LEC.

There was a lot that Giants head coach Jason McKee liked about his team’s effort.

McKee said a skilled Royals squad brought a variety of challenges to the table.

And then there’s Outhouse, who was easily the Royals’ best player.

“He’s been good against us for two years, now,” McKee said. “He was good again tonight. He’s athletic, he makes saves that you don’t expect him to, and he’s a big part of their team.”

The Giants set the tone by striking for two goals in the waning seconds of the opening frame.

On a Giants’ power play, Jared Dmytriw tipped in a point shot from Alex Kannok Leipert with 31 seconds to go in the first period.

It didn’t took long for the Giants to make it 2-0. A mere two seconds to go before the intermission, the Giants’ tough, veteran blueliner Darian Skeoch notched his first of the campaign to stun the Royals and give the hosts a two-goal cushion.

The Giants smothered the Royals for much of the second period and by all accounts could have easily been up by five or six goals, if not for Outhouse’s fantastic netminding.

The boys in black were finally rewarded when captain Tyler Benson took a feed from linemate James Malm and had an open net to shoot at — he made no mistake in muscling the puck past a sprawling Outhouse.

But against the flow of the play and with 45 seconds remaining in the middle period, Noah Gregor put the Royals on the board on a bang-bang play, for his 15th of the season.

It was just the 13th shot the Royals had managed on Giants’ goaltender David Tendeck at that point of the night.

The first half of the third period was highlighted by a bone jarring bodycheck delivered by Benson on a Victoria defenceman as the puck was rung around the boards.

Benson was called for charging on the play, and Victoria’s Ralph Jarratt gave Benson the business to defend his teammate, was called for roughing, so the penalties evened themselves out.

Outhouse had some company in the strong goaltending department: Tendeck made a few solid stops with Victoria pressing late in the contest.

The Royals pulled Outhouse for an extra attacker late in the game but any hopes for a comeback were dashed when forward Tyler Soy took a needless slashing penalty with 37 seconds to go in regulation.

Even though they were stymied after their third goal, the Giants stayed patient, another trait their head coach liked.

“We stuck to the game plan in the third,” McKee said. “We never really hurt ourselves which is a big stepping point for this team. We played the game the right way. We made them try to beat us; we didn’t beat ourselves.”

And on Sunday, the Giants wrap up their three-games-in-three-days weekend when they host the Prince George Cougars on Teddy Bear Toss day at the LEC. Game time is 4 p.m. 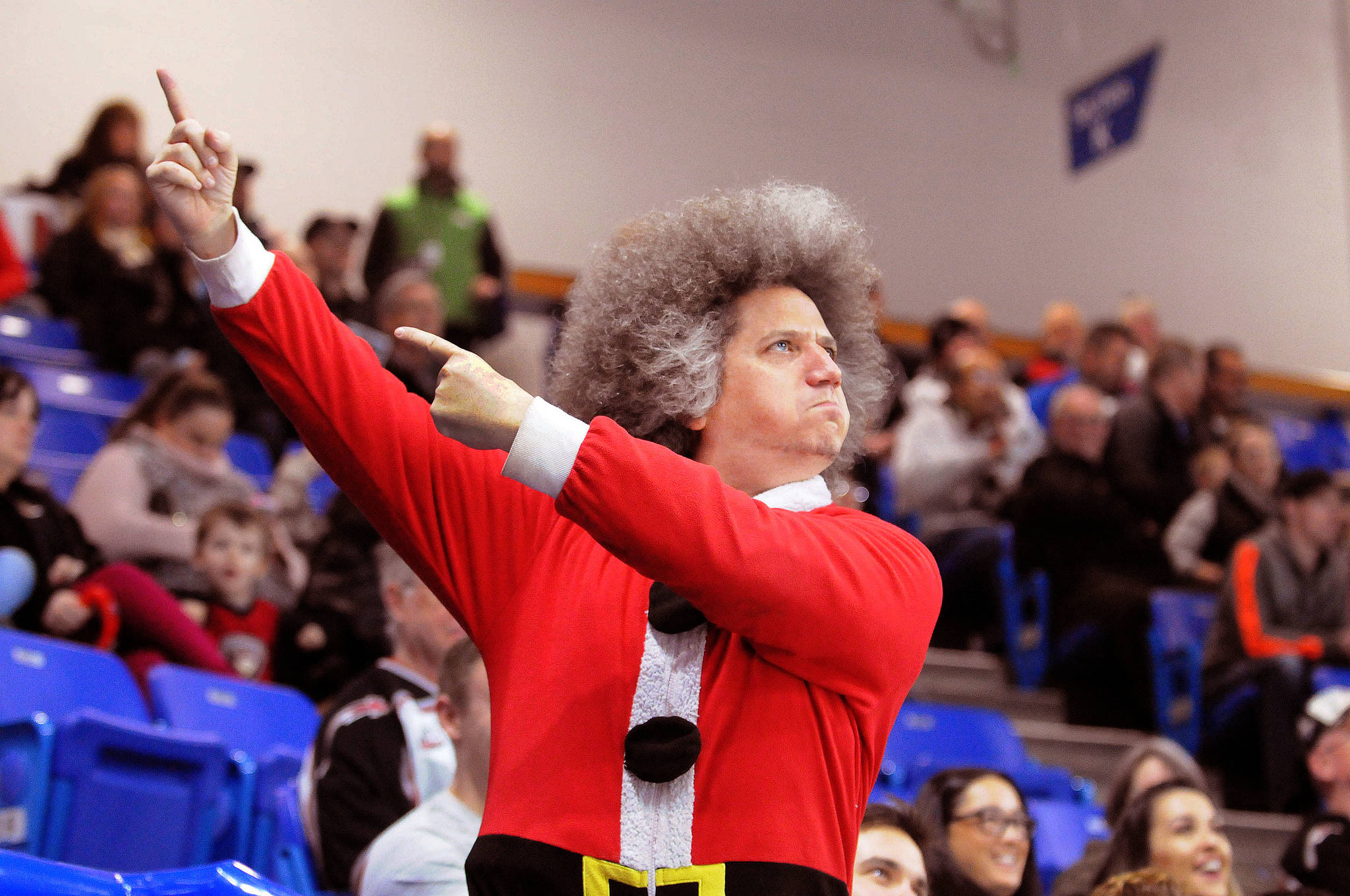 A fan dressed as an angry Santa Claus showed his emotions Friday at the Langley Events Centre, as the Vancouver Giants hosted the Victoria Royals. Troy Landreville Black Press 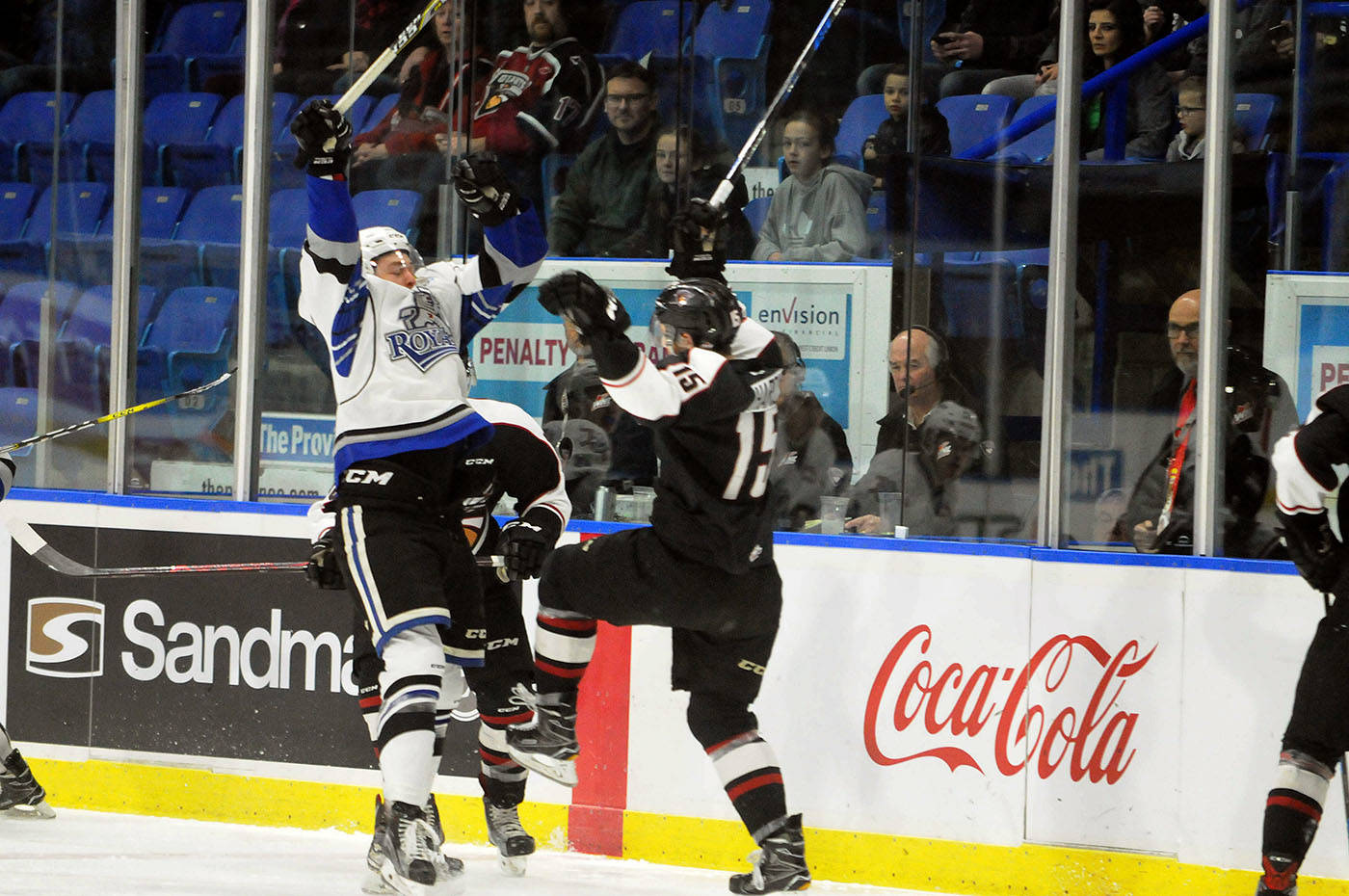 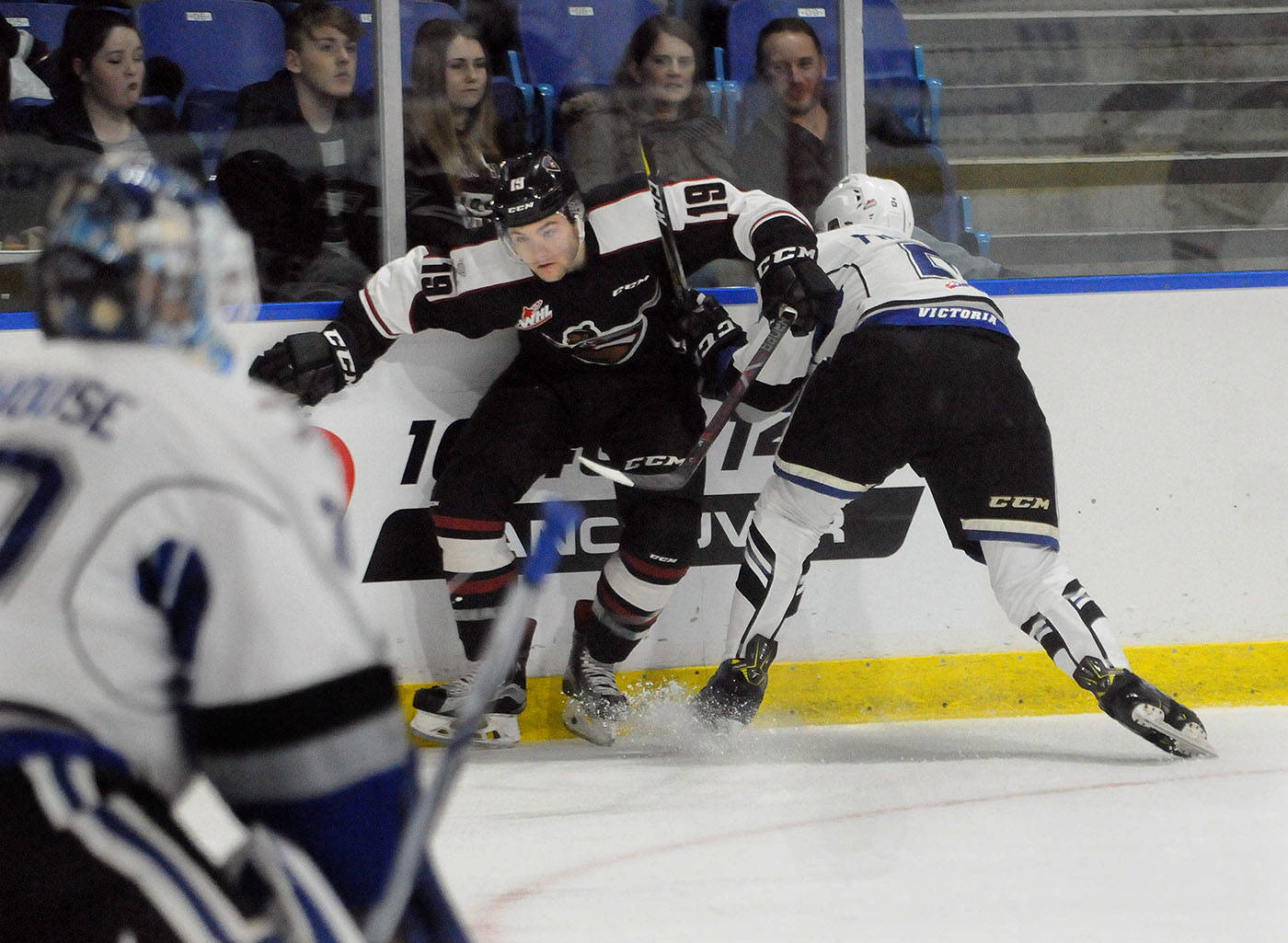 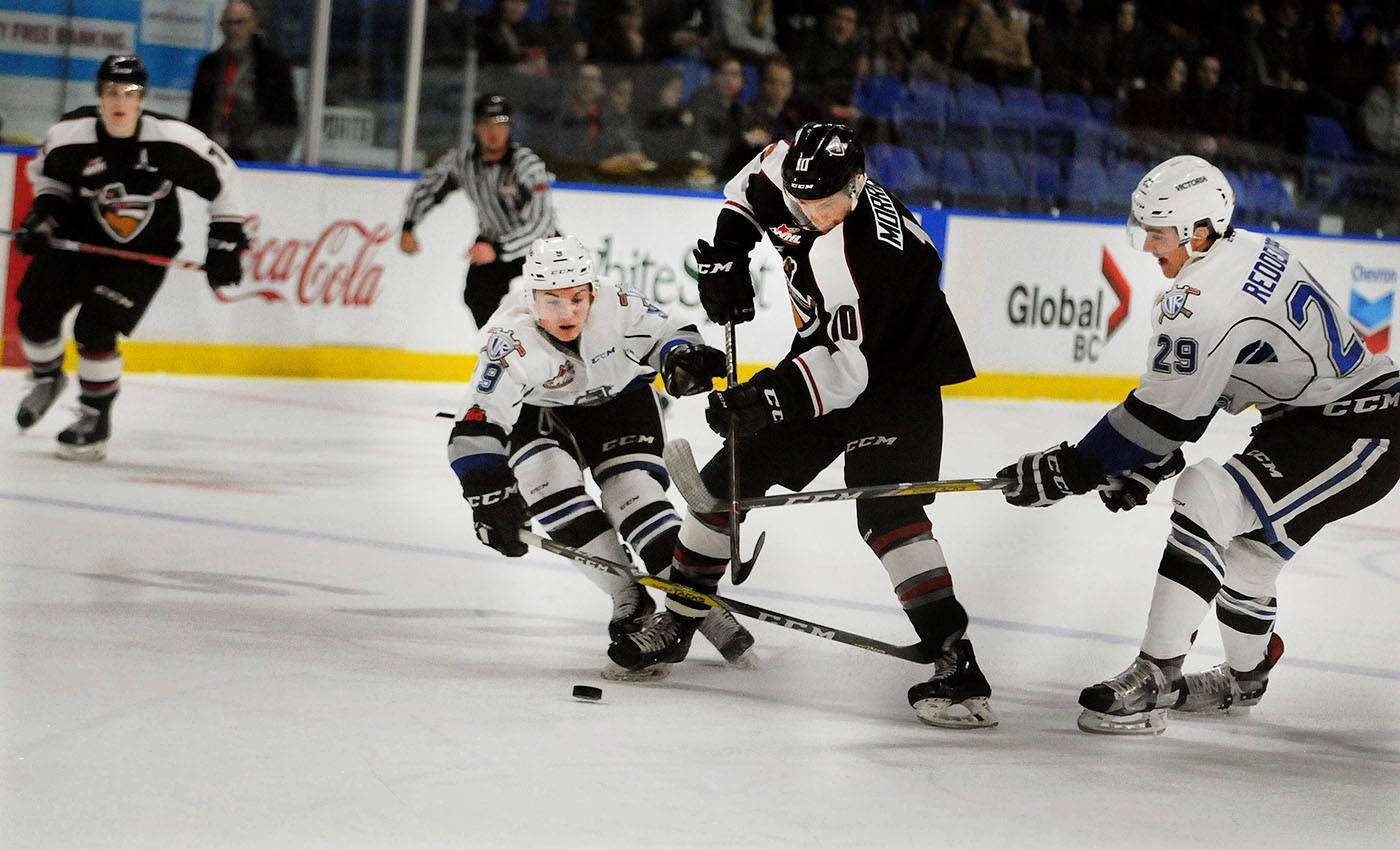 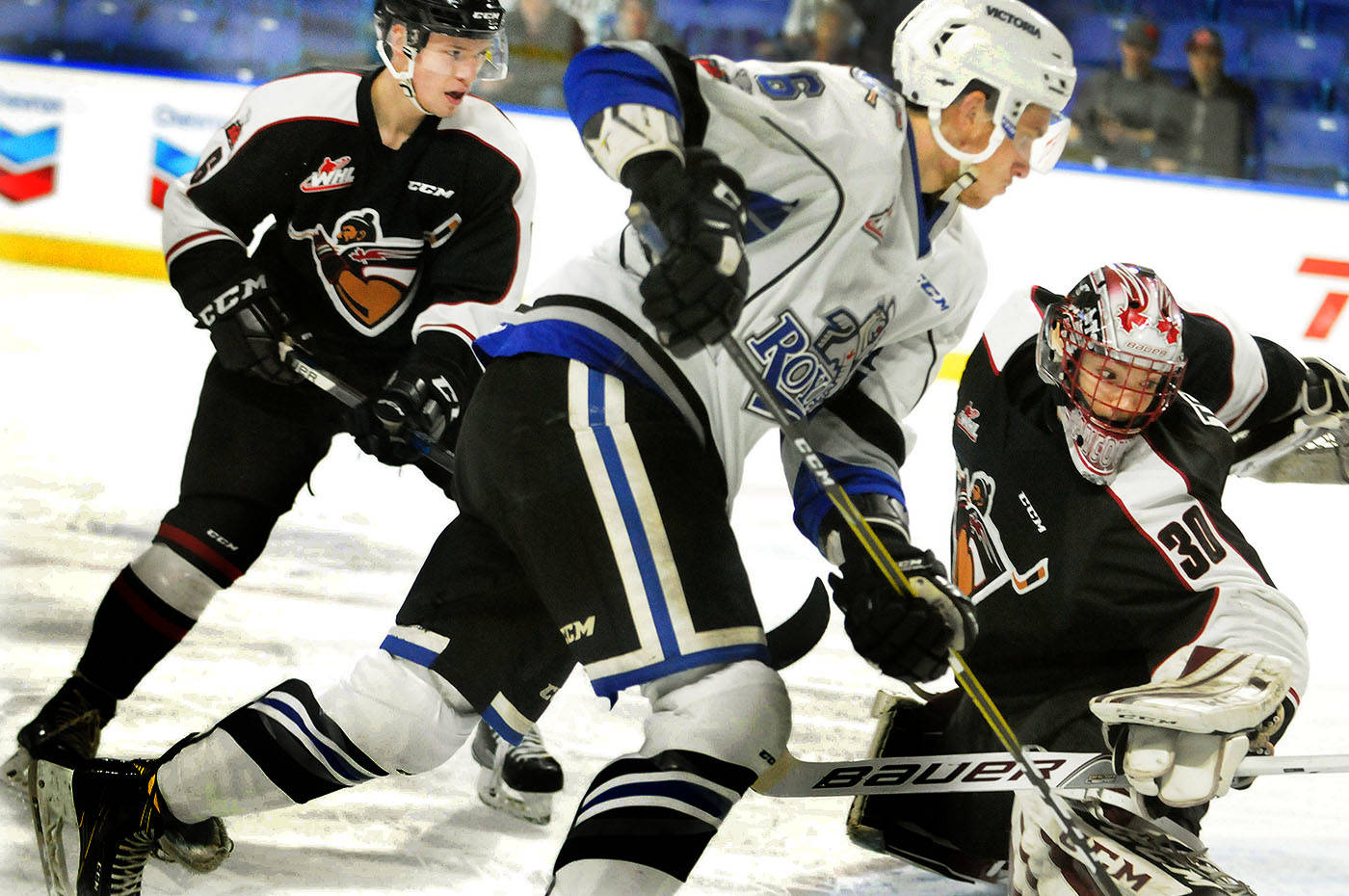 AT THE TURN: Need to give a golf gift but don’t get the game? Help is here

ELECTION: Ryan Warawa to run for BC Conservative Party in Langley East