What a way to end a season.

Langley Rams wrapped it up with a 64-3 win over the Kamloops Broncos Saturday night at McLeod Athletic Park, extending their undefeated run to the entire 10-game regular season.

Head coach Howie Zaron said the top goal going in was to enable running back Andrew Pocrnic to complete his bid to set new records.

“The main part was to make sure Pocrnic got his record,” and making sure the team came out of the game healthy, Zaron observed.

As it turned out the team succeeded on both points.

Pocrnic carried the ball 19 times for 222 yards and six touchdowns versus the Broncos.

In the process the Saskatoon native broke a league record for the most touchdowns in a season, bringing his tally to 27.

He is also rushing leader for the season.

After the game, Pocrnic described it as a “surreal” experience.

His mother, brother and nieces were there to witness the accomplishment, which made the moment even better, he said.

“I want to give a shout out to the “o” line,” Pocrnic commented.

“Without them, I couldn’t have done it. They’re the best group in the country.”

Congratulations to Andrew Pocrnic of the @LangleyRams on setting a new #CJFL single season record with 27 rushing touchdowns! https://t.co/drSYkwLISE pic.twitter.com/rK3h67s8UY

Now, he said, attention must shift from the regular season to the semifinals.

“That’s [regular season] in the past.”

TOUCHDOWN RAMS!!!! ANDREW POCRNIC IS THE ALL TIME LEADER FOR TOUCHDOWNS IN A SEASON WITH 27 @CJFLnews pic.twitter.com/Y1foNxKd1e

Play was halted for about 30 minutes when Broncos wide receiver Brendan Girard suffered an apparent leg injury during play and had to wait on the field until paramedics could assess and transport him to hospital.

It will be against either the Okanagan Sun or VI Raiders, pending the result of Sunday’s Sun vs Rebels game. 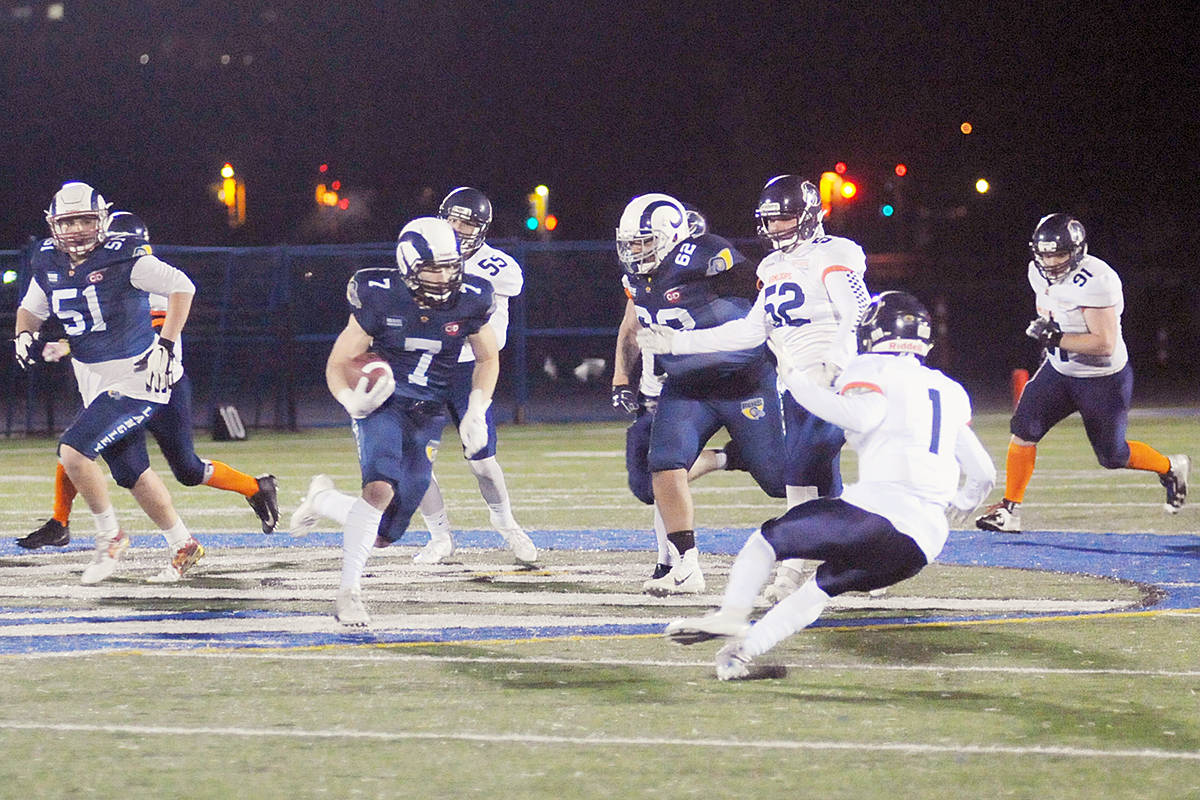 Rams offensive line cleared a path for Andrew Pocrnic as the running back set a new record for total touchdowns in a season. (Dan Ferguson/Langley Advance Times) 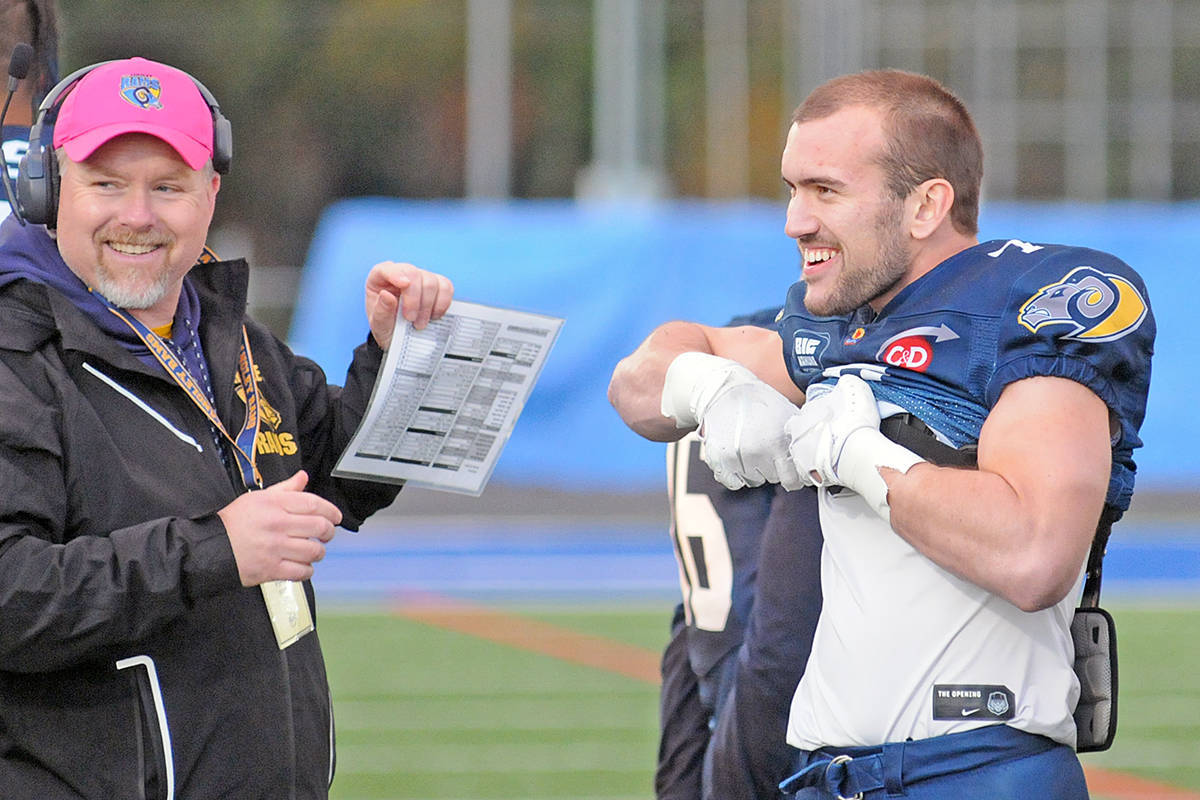 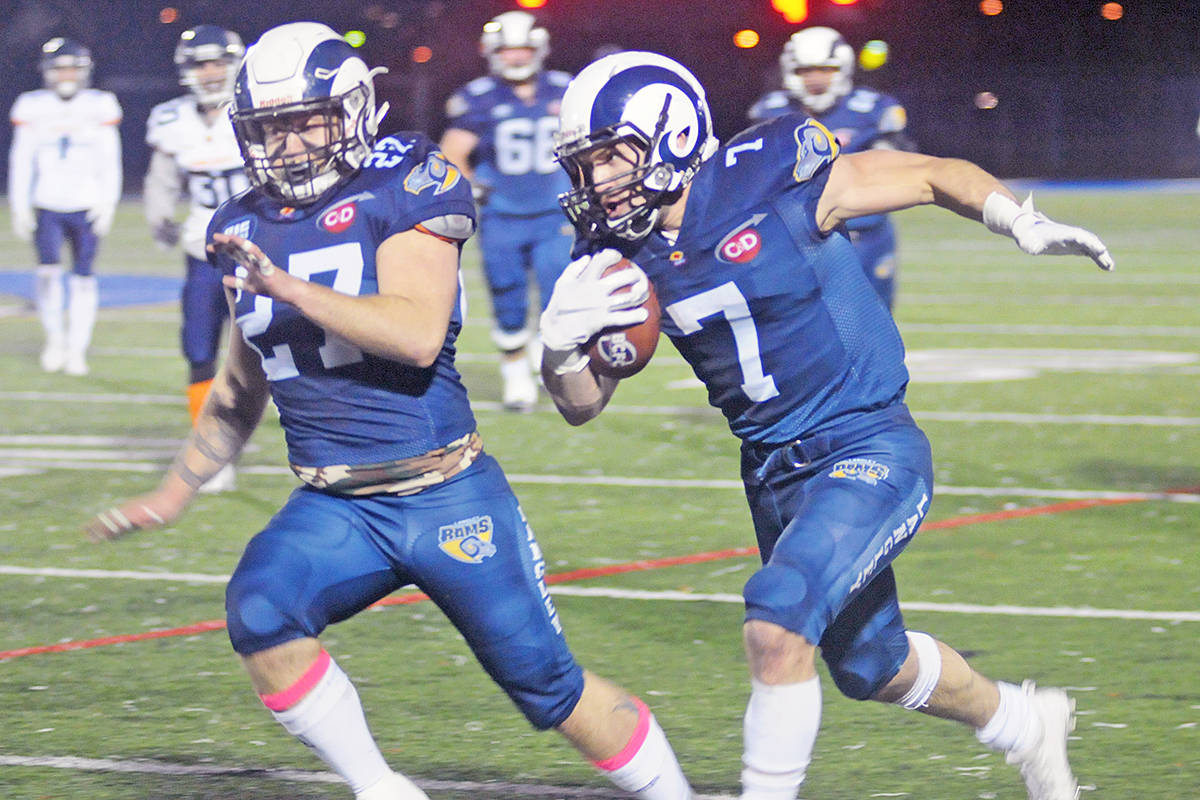 Langley Rams Andrew Pocrnic was paced by Dillon Cusker as he set a record for total touchdowns in a season Saturday, en route to a 64-3 win before an appreciative home town crowd. (Dan Ferguson/Langley Advance Times)