Fraser Valley Bandits suffered the first loss of the season, 86-77, against the Saskatchewan Rattlers on Wednesday night and are now gearing up for a rematch on home court this weekend.

It dropped the winning team to 2-1 on their young Canadian Elite Basketball League season.

The Bandits will debut at Langley Events Centre (LEC) for their home opener in a rematch against the Rattlers on Saturday, June 4. And, as of Thursday, there were only 400 seats left and organizers were expecting a sell-out. In fact, games 2 and 3 at home are already sold out, noted Bandits’ spokesperson Andrew Savory.

The Rattlers were paced by another strong performance from Philadelphia native and former New Orleans Pelicans draft pick Anthony Carr.

Carr netted a game-high 25 points to go along with seven rebounds, four assists and three steals without turning the ball over. In the Elam ending, Carr scored or assisted on seven of the team’s final nine points.

Saskatchewan also saw contributions from the rest of their core, with Devonte Bandoo, Jordy Tshimanga, and Scottie Lindsey each scoring 14 points. Tshimanga and Bandoo were both active on the glass as well, snatching 13 and 8 rebounds, respectively, for the Rattlers.

Alex Campbell struggled against his former team, finishing with 14 points on 3-9 shooting from the field and 6-10 from the free throw line.

Thomas Kennedy and Chris McLaughlin provided a strong interior presence splitting time at the centre position. Kennedy had 13 points, five rebounds and three blocks on 6-of-7 shooting while McLaughlin had 10 points and five rebounds on 4-of-5 shooting. Kadre Gray and Malcolm Duvivier both left the game early with lower body injuries.

Saskatchewan continued to connect from three, shooting 40 per cent on 13-32 shooting as a squad. However, the biggest difference maker for the Rattlers on Wednesday was their tenacity on the glass. They outrebounded Fraser Valley 52-34, picking up 18 offensive rebounds and outscoring the Bandits 20-3 on second chance points.

“The main takeaway from the game was their offensive rebounding,” Bandits head coach Mike Taylor said. “We’ve got to make a physical response in the game on Saturday.”

“I’d rather set my offence up to make the first shot,” Rattlers head coach Dean Demopoulos said. “I’m glad we had a lot of second chance points, but we need to do better offensively.”

The first quarter saw the Rattlers come out firing.

They shot 61 per cent from the field in the opening frame and 62 per cent from three. Saskatchewan went on a run to close out the quarter, powered by Carr’s dish to D’andre Bernard for a dunk off an inbounds pass and a contested Carr three to beat the buzzer.

The Rattlers led the Bandits 29-20 after one quarter.

Fraser Valley was able to fight back early in the second quarter with the Rattlers cooling off.

The two West Coast squads went back and forth all quarter and entered halftime tied 45-45.

Carr led all scorers at halftime with 12 points to go along with five rebounds, while Lindsey chipped in 11 points, 9 of which came from long range.

Meanwhile, Shane Gibson attacked the hoop and hit open threes in the first half, leading the Bandits with 11 points heading into the locker room.

Bandoo started to heat up in the third quarter for the Rattlers.

The squads exchanged punches with the Bandits finding success in the paint with Kennedy and McLaughlin, who started the second half after picking up 2 early fouls in the first.

Tony Carr continued to ball out for Saskatchewan, scoring from the post and from the outside. The teams remained tied at 63 heading into the final quarter of play.

Both teams opened the fourth quarter cold with a single bucket in the first three minutes.

However, the Rattlers picked up the pace coming out of a timeout with Tshimanga picking up two putback buckets and an and-one.

The Bandits went the first six minutes of the quarter with just one field goal and entered the Elam Ending trailing 77-71 with a target score of 86. The Rattlers were able to close it out and evened their all-time record against Fraser Valley to 5-5.

The Bandits and Rattlers won’t have to wait long for that rematch.

Saskatchewan travels to British Columbia for a Saturday afternoon matchup at LEC at 2 p.m. in the second leg of a home-and-home with Fraser Valley.

Time to make history this Saturday, June 4 when we welcome the #FoxFam to our new home.

Limited tickets remain and are available at THIS link. 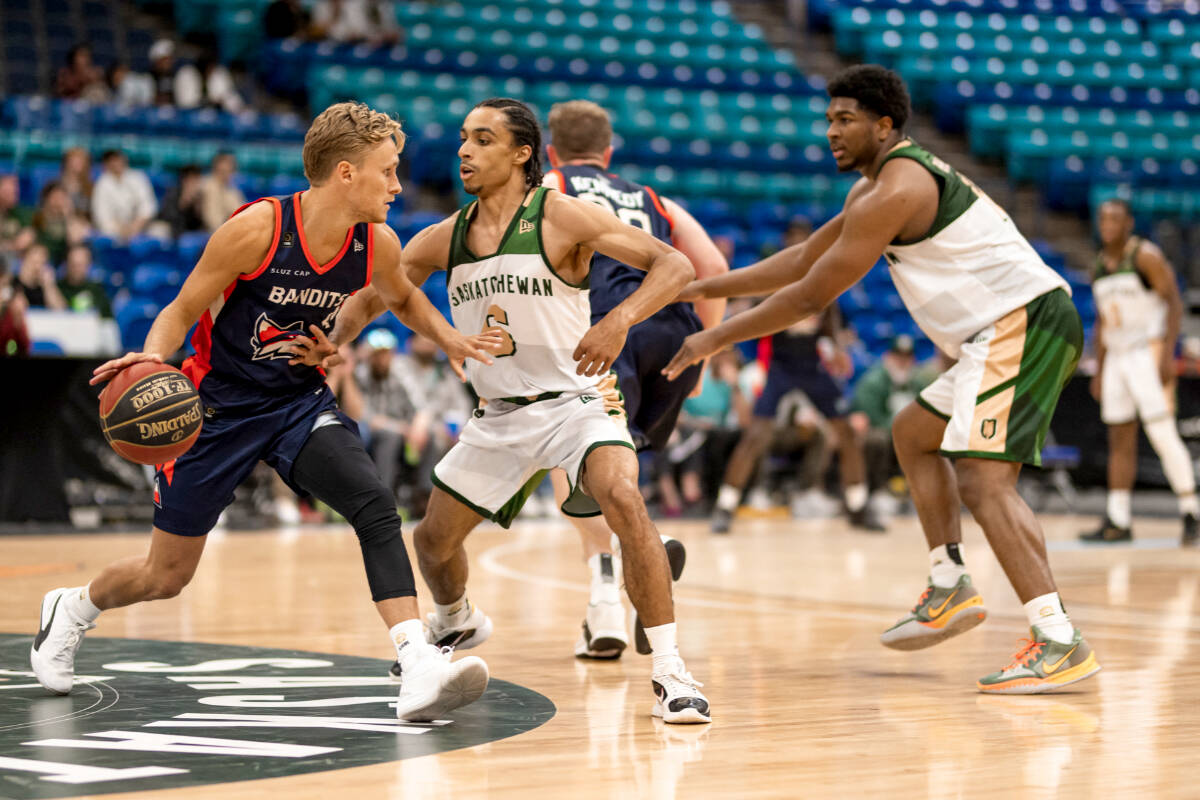 Saskatchewan Rattlers defeated Fraser Valley Bandits, 86-77, and are now looking for a rematch in Langley Saturday afternoon. Bandit’s Kyle Adnam was among those on the court in Saskatchewan Wednesday. ( Canadian Elite Basketball League/Special to Black Press Media) 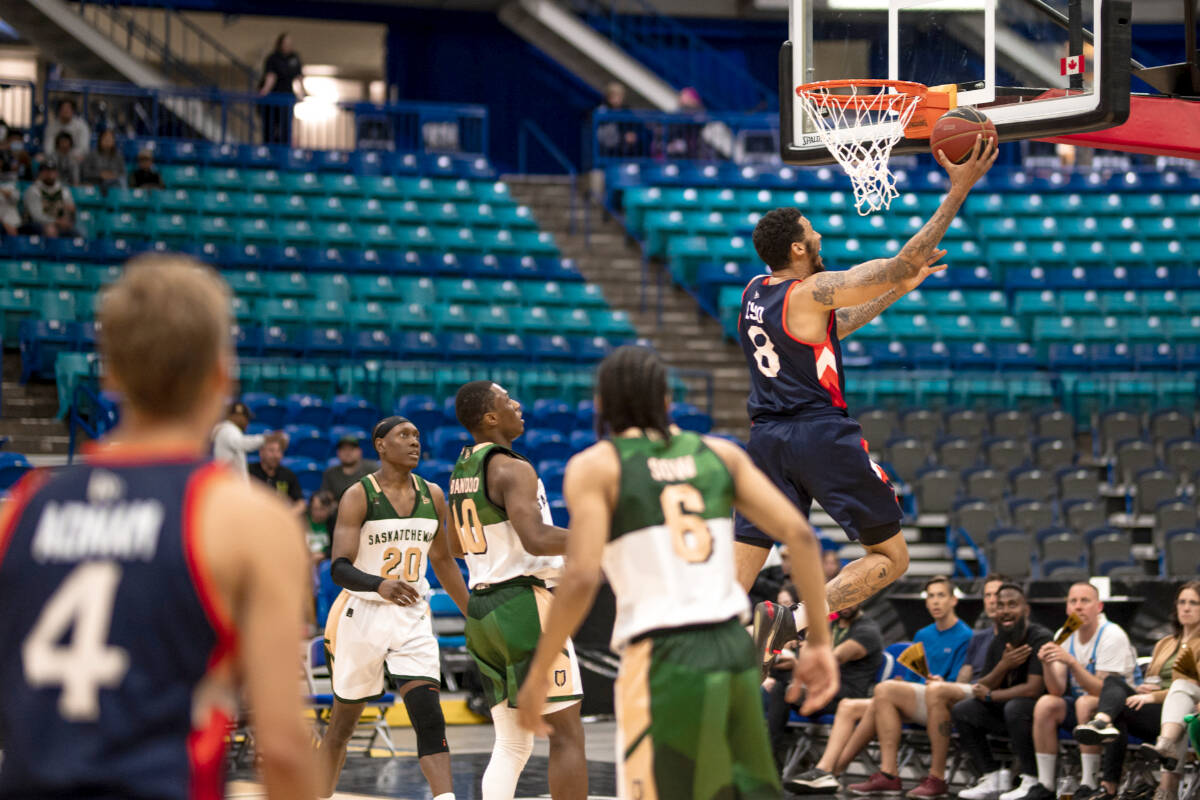 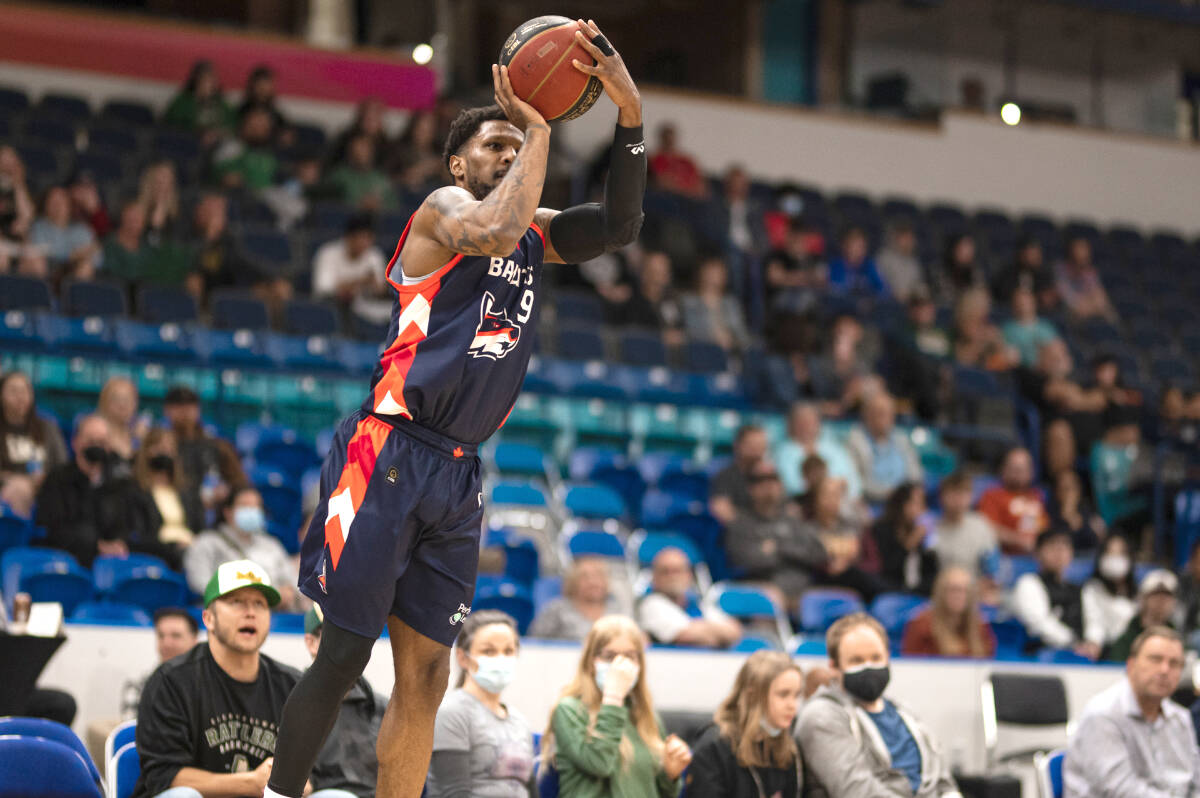 ‘Soccer is my religion’: Nick Kollias built up the game he loves in northern B.C.