They won and now they wait. That is the situation the Fraser Valley Bandits found themselves in following an 86-80 victory over the Edmonton Stingers on Saturday night at Langley Events Centre to close out the Canadian Elite Basketball League (CEBL) regular season.

While both teams have qualified for the postseason, their respective opponents and playoff dates remain up in the air depending on how the other teams do.

Fraser Valley will play their next game at home at Langley Events Centre, either Thursday, Aug. 4 – if they finish fourth – or Sunday, Aug. 7, if they move up to second or third place, allowing them to avoid the play-in game and advance directly to the quarter-final.

Saturday’s game began with Fraser Valley jumping out to a 22-13 lead before a slow second quarter allowed Edmonton to take a 44-40 advantage into the locker room. The Stingers stretched the lead to 11 in the third quarter before the Bandits cut the deficit down to five points at the end of the third quarter, 63-58.

Down 73-72, the Bandits scored the next five points before the Elam Ending was triggered – the target score was set at 86 – and they won it on a Brandon Gilbeck free throw.

Marek Klassen led all players with 19 points, 10 of which came in the first quarter while Malcolm Duvivier scored 11 of his 18 points in the fourth quarter. That included a trio of huge three pointers to lead the comeback.

“I think we just stopped complaining and focused on the game. They came and put it to us so we stepped up our toughness and came together and were able to pull it through at the end,” Duvivier said.

Fraser Valley coach Mike Taylor credited Duvivier’s contribution off the bench as a spark for the shorthanded Bandits who were playing their third game in six days in three different cities and only had eight players for Saturday’s contest. 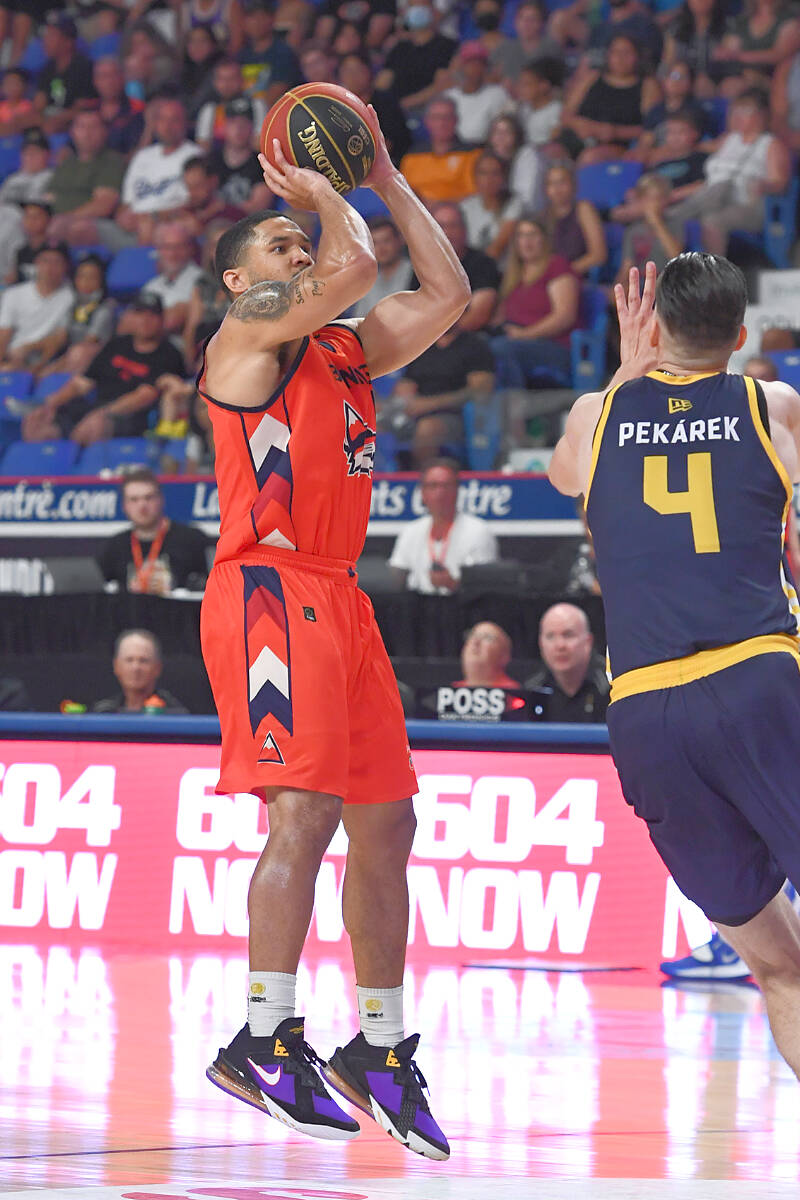 Bandits’ Malcolm Duvivier scored 11 of his 18 points in the fourth quarter against Edmonton on Saturday, July 30, including a trio of huge three pointers to lead the team comeback at Langley Events Centre to close out the Canadian Elite Basketball League (CEBL) regular season. (Fraser Valley Bandits/CEBL)

“We were a little flat, physically and it wasn’t an easy game for us, but we made the adjustments well in the game and that’s a credit to the players. They really battled and really worked hard,” Taylor said. “In the first half, we were complaining too much to the referees. We adjusted in the second half very well, kept our emotional discipline and focused more on the game and making plays.”

“We have so many offensive weapons, it is just about playing together and stepping up when your time comes,” Duvivier said.

Five Bandits reached double figures with Klassen’s team-best 19 points – and seven assists – making him the ninth different Fraser Valley player to lead in a game this season. Klassen also tied Alex Campbell with a team-high nine rebounds. Duvivier had 18 off the bench while Maxie Esho and Gilbeck both scored 11 and Shane Gibson had 10. Gilbeck also had six of the Bandits’ 10 blocked shots.

Charron, Deguchi and McIntosh top the podium for Canada at Commonwealth Games