The Vancouver Giants kicked off their six-game Central road trip with a 6-0 victory Friday night over the Red Deer Rebels.

The trio of Tristen Nielsen, Evan Patrician and newcomer Jared Legien combined for eight points and goaltender David Tendeck turned aside all 28 shots he faced to earn his fifth WHL shutout. Ethan Anders and Byron Fancy combined for 29 saves for the Rebels.

Six different Giants found the back of the net as they improved their road record to 8-3-1-0.

The Red Deer Rebels outshot the Giants 13-6 in the opening period, largely off the strength of two five-on-three power play chances. Giants goaltender David Tendeck was terrific though turning aside all Red Deer opportunities. His best save came point-blank off Blake Sydlowski mid-way through the period. In total the Giants were penalized four time in the first 20 minutes. The score remained 0-0 through one frame.

The parade to the box continued for the Giants in the second period, but the penalty kill once again rose to the occasion. The Giants killed off three consecutive penalties to start the second period, and despite the wide gap in penalties the score was still 0-0 mid-way through the middle period. In total the Giants killed off six straight Red Deer power plays. That changed at 12:18 when Alex Kannok Leipert crashed the net and whacked home a Jared Legien rebound past Ethan Anders for his second of the season. Just under five minutes later the G-Men increased their lead to 2-0 when Davis Koch converted off a Brayden Watts feed off an odd-man attack. For Koch it was his 10th of the season. Shots through two periods were 25-17 for Red Deer but the score was 2-0 Vancouver.

Michael Dyck’s Giants tacked on four more goals in the final period. The first came via newcomer Jared Legien who one-timed a pass from Tristen Nielsen past Ethan Anders to secure his first goal as a Giant (in his first game as a Giant). Captain Jared Dmytriw extended Vancouver’s lead to 4-0 when he tucked home his eighth of the season on the Giants first power play chance of the game. 30 seconds later Justin Sourdif ripped a shot past the glove of Ethan Anders to make it 5-0, chasing Anders from the game. The final goal of the game came via Tristen Nielsen on a power play at 13:25. With the Giants up five skaters to three, Nielsen skated into the right circle and wired home a shot over Byron Fancy’s left shoulder to round out the game’s scoring. The Giants outshot the Rebels 18-3 in the third period.

Giants next game: Sunday afternoon at against the Calgary Hitmen at the Saddledome.

– Friday’s shutout victory was the fifth of Arizona Coyotes prospect David Tendeck’s career. Three of Tendeck’s five shutouts have come on the road.

– 1998-born forward Jared Legien suited up in his first ever game for the Vancouver Giants and recorded a goal and two assists. The Pilot Butte, SK native started this season with the Yorkton Terriers of the SJHL and had 28 goals and 24 assists for 52 points in 32 games. Last season Legien split time with the Victoria Royals and the Regina Pats and finished with 23 goals and 27 assists for 50 points in 61 games. 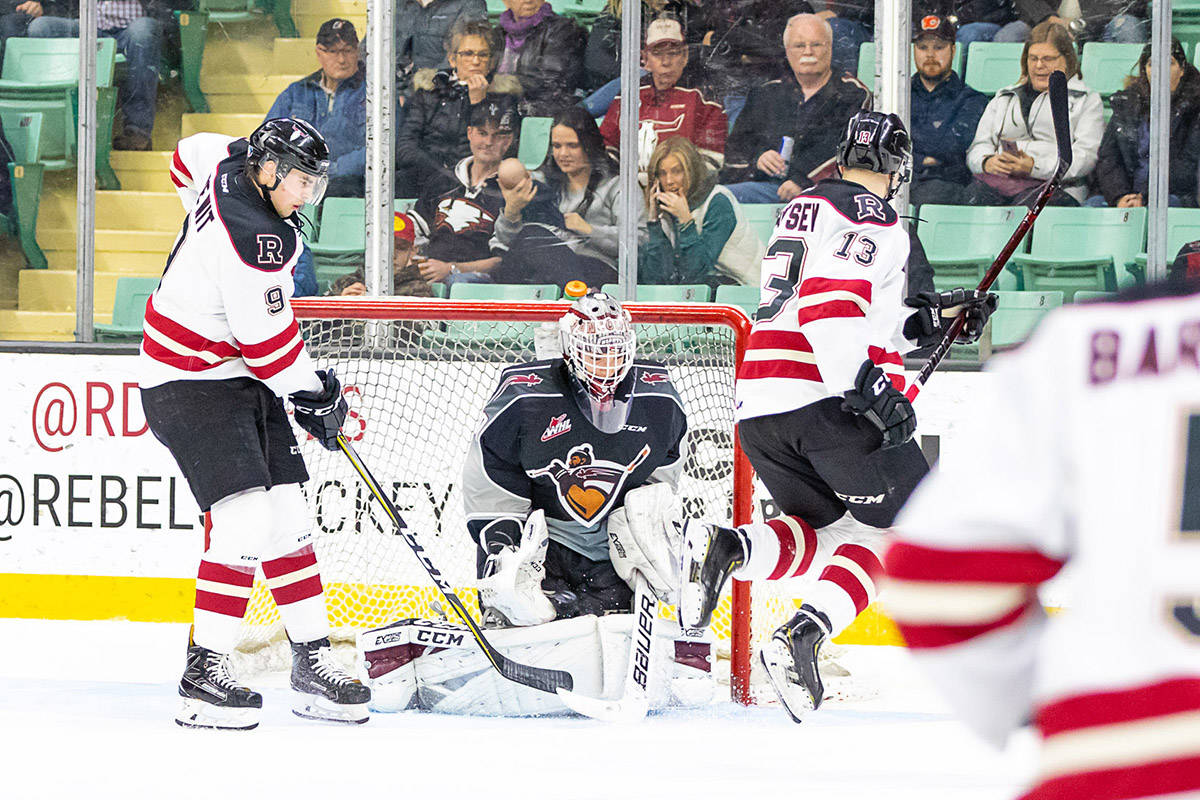