The message was the same from both head coaches: it’s just one game.

Of course, it obviously felt better from the Prince Albert Raiders side of things.

By comparison, the Vancouver Giants managed just eight shots in that same frame.

Parker Kelly opened the scoring 41 seconds in, snapping a shot off the wing past David Tendeck.

Less than two minutes later, Ozzy Wiesblatt had doubled the lead and then Brett Leason scored twice with a goal from Cole Fonstad sandwiched in between.

In total, it was five goals in the first 8:20 and it was game, set and match.

When all was said and done, the Raiders prevailed 8-2 in game three of the Rogers WHL Championship Series, taking back home-ice advantage as they now lead the best-of-seven series two games to one.

RECAP: Raiders down the Giants 8-2 Tuesday at the LEC. Giants now trail the 2019 Rogers WHL Championship Series 2-1 with a HUGE Game 4 set for tomorrow night at 7 PM.

“We don’t get too high or too low, it is one game,” said Prince Albert coach Marc Habscheid.

“There’s not much to celebrate about. We are not here to win one game, we are here to win a series.”

As for the Giants, the message was also simple.

“We are down 2-1 in the series,” said head coach Michael Dyck and just like his counterpart said, they won’t focus on the victory, the Giants bench boss said they will not be dwelling on the defeat. “We are going to get ready for tomorrow.”

“We got on our heels, they generated some momentum and it just seemed that everything they put on the net, went in,” Dyck said.

Kelly and Noah Gregor added first-period goals and Dante Hannoun made it 8-0 with his team’s fourth power-play goal of the game, in the latter stages of the second period.

Habscheid said they knew the Giants would want to come out strong, wanting to defend their home ice.

“We had that mindset that we weren’t going to wait around and see what they were going to do,” he said. “We just wanted to start if fast and start it hard.”

The Giants finally solved Raiders goalie Ian Scott, scoring for the first time since the second period of game one’s 5-4 victory, snapping a scoreless streak of 120:05.

WATCH: Dallas Hines talks during morning skate ahead of Game 3

Yannik Valenti scored the game’s final goal at 14:44 of the third period with both his tally and Watts’ strike coming with the man advantage.

The Giants power play did go 2-for-8 while the Raiders went 4-for-8 but by the time Vancouver received their first man-advantage opportunity, Prince Albert had already gone 3-for-4 and led 6-0.

Entering the game, Vancouver’s penalty kill was fifth among the post-season clubs at 78.6 per cent but dropped all the way down to 12th among the 16 teams who qualified, now down to 75 per cent.

Dyck said the team cannot control the officiating, nor does he want his team focusing on that either.

But there were dubious calls made by the refereeing crew, however, including Vancouver twice being down two men among their first four penalties.

“All we ask for is a level playing field. There were times we didn’t help ourselves either, we could have been a better disciplined team,” he said. “But those are things we can’t control.”

What they can control is having a better start to the game, where they don’t surrender a goal on the first shot and doing a better job of not putting themselves in a position where they may be whistled for an infraction.

LISTEN: Toigo talks about how home-ice advantage has helped Giants reach the finals

Both teams now shift their focus to Game 4, which is set back for Langley Events Centre on Wednesday with a 7 p.m. puck drop. Game 5 will also be at LEC on Friday night, starting at 7:30 p.m.

Dyck is confident his team – which only lost more than two consecutive games once all season – can put the loss behind them.

“We have never ever gone our separate ways in these situations. We have always pulled together,” he said.

Captain Jared Dmytriw echoed those sentiments, saying the team will be stronger because of this.

“The sun is going to come up tomorrow, and that’s the beautiful things about hockey and the playoffs, we have another crack at it tomorrow,” he said.

Note: Tendeck and Miner saw action in the Giants crease. Tendeck started but was pulled after allowing two goals in four shots. Miner came in and finished the period, surrendering five goals on 14 shots. Tendeck then returned to start the second period and stopped eight of the nine Prince Albert shots over the final two periods.

• Tuesday’s loss for the Giants marked the first time during the 2019 WHL playoffs that the Giants have lost two in a row.

• The Giants power play has now clicked in 16 of their 18 playoff games.

• Never at any point during the 2018-19 regular season or playoffs have the Giants surrender more than six goals against until Tuesday night.

• With an assist on Yannik Valenti’s goal, Giants defenceman Bowen Byram is tied with Raiders forward Dante Hannoun for the WHL playoff scoring lead with 23 points.

Tickets for Game 4 and 5 at the Langley Events Centre are available online. 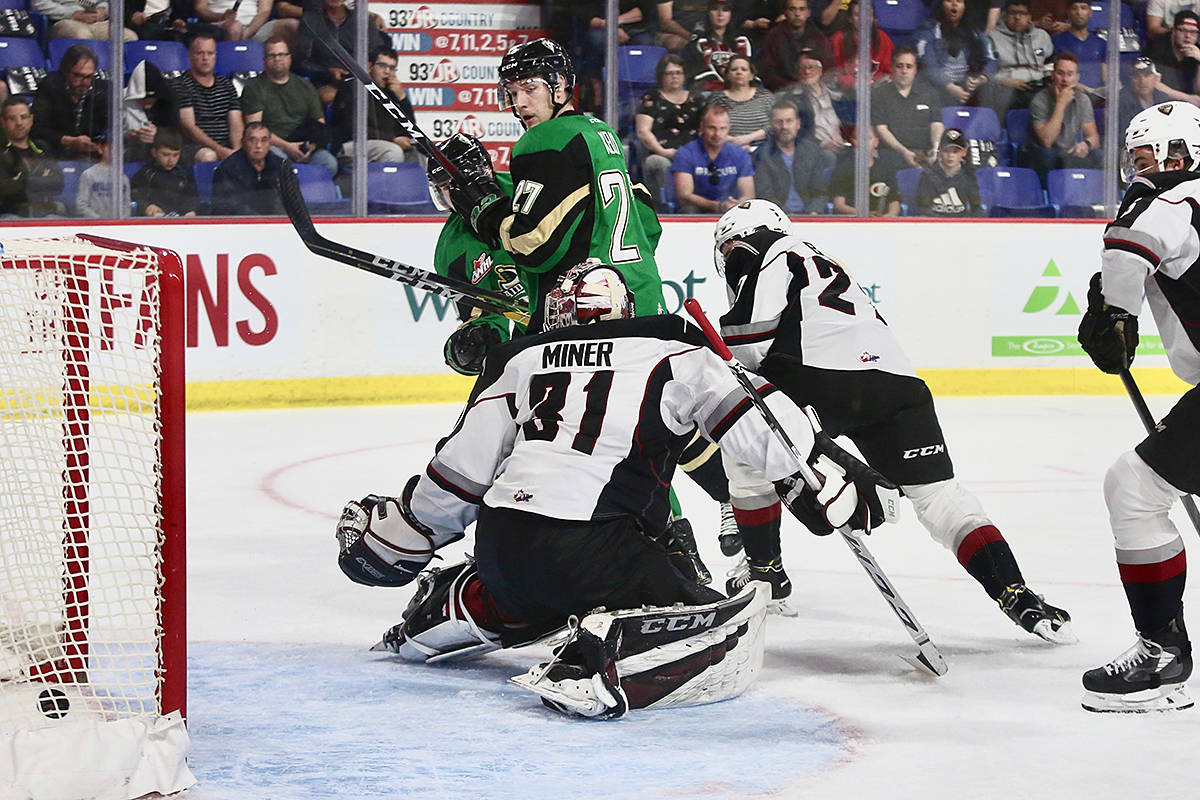 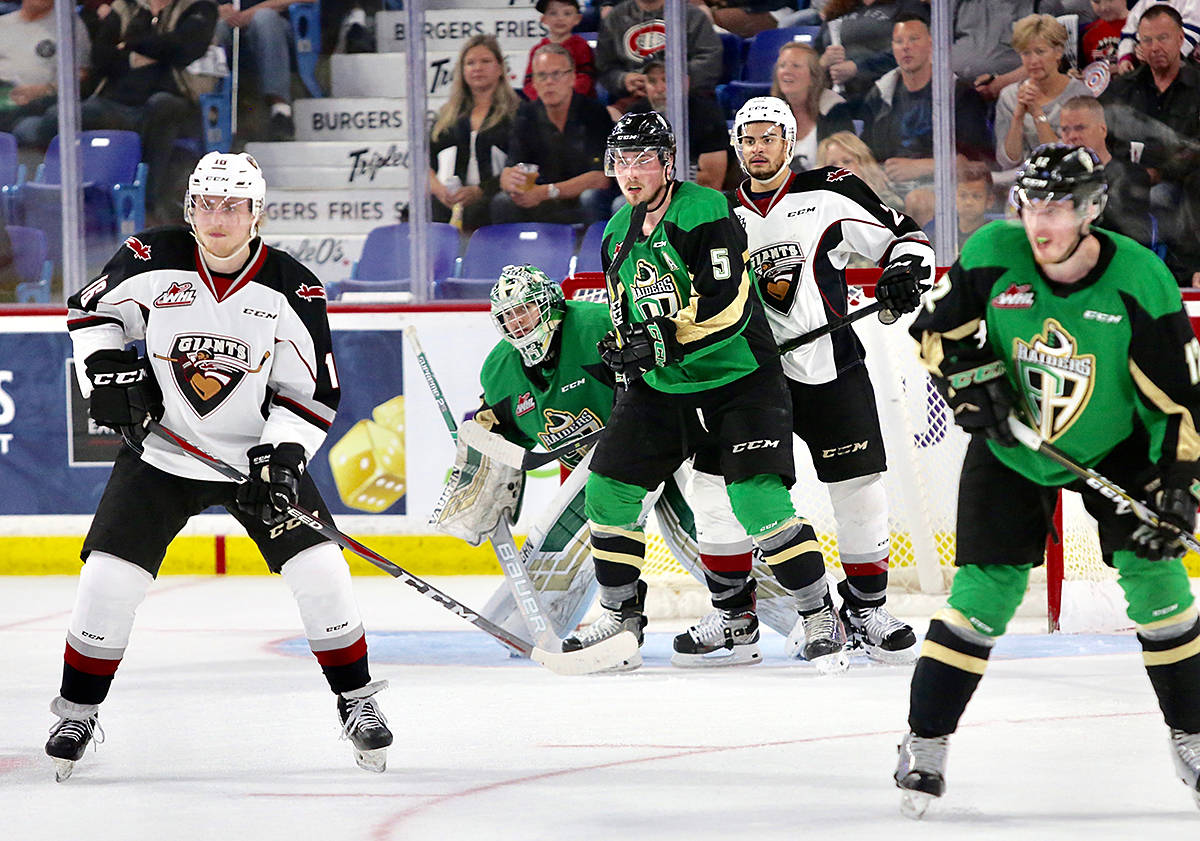