Tyler Benson had just extended the Vancouver Giants lead to 2-0, one-timing a slap shot from the blue-line, for what turned out to be the game-winning goal.

As the Giants captain celebrated with his teammates in the final minute of the second period, he waved to Victoria Royals’ Jeff de Wit, who had smacked Benson after the whistle in front of his team’s goal, sending the Giants to the power play.

“I didn’t like the play and I guess the feelings were still high,” Benson said with a smile after the game, a 5-1 win on Tuesday night at the Langley Events Centre.

The goal stood as the game-winner as the Giants took a 2-1 lead in the best-of-seven WHL quarter-final series. Game four is set for Thursday (March 29) at the LEC at 7 p.m. with the game set to be broadcast nationally on Sportsnet.

“You can’t be deterred. You have to bounce back right away.”

Game three featured constant post-whistle scrums and the players and coaches all know just how important discipline is.

The Giants went 1-for-4 on the power play while Victoria was 1-for-5, including a five-minute man-advantage to start the third period after Matt Barberis received a major and game misconduct for a cross-check at the second period buzzer.

Kaid Oliver, who was on the receiving end of Barberis’ stick, did return for the third period, which could bode well for a Vancouver team still without defenceman Darian Skeoch, who is suspended until game five.

It is unclear if Barberis will face supplementary discipline from the league but all major penalties are reviewed.

“Some poor decisions that we will have to clean up, obviously,” he said.”It almost hurt us tonight.”

“There were a lot of times we bent, but didn’t break.”

“It’s that time of year when emotions are high. You have to get their nose in there, you can’t back down, but you have to toe the line but not cross it,” the coach added. “Tonight we crossed the line a couple of times and got penalized.”

Vancouver’s Owen Hardy opened the scoring 6:32 in, collecting a loose puck from behind the Victoria goal and after being forced to the wall, he spun and his quick shot surprised Royals’ goalie Griffen Outhouse.

The Royals had a glorious opportunity to tie the game while short-handed after Dylan Plouffe bobbled the puck, Dante Hannoun and Noah Gregor were on a 2-on-0 break from their own blue-line.

After a couple of short passes to get the goaltender moving, Vancouver’s David Tendeck was able to make a glove save on Hannoun’s attempt.

Tendeck was making his first start since March 11, missing the team’s final three regular season games and both games one and two in Victoria.

While he skated last week and there was thought he might play in game two, Tendeck’s first practice was not until Monday, the day before game three.

McKee said there was no thought on resting him one more game as Trent Miner had done good job in games one and two, with a 3.04 goals against average and a .910 save percentage.

“Dave came back (and) looked like he didn’t miss a beat,” the coach mused. “There could have easily been some rust but I know he has worked extremely hard in the last week, preparing himself to get back in the net.”

And Tendeck was called upon in the second period with the Royals firing the 12 of the 13 shots on the Giants goal in the first nine minutes of the frame.

Tendeck stopped them all and Benson’s goal gave the team some breathing room.

The power-play goal — Vancouver’s first of the series after going 0-for-5 in games one and two combined, sparked the offence.

“That was a big one for us. We didn’t get any in (Victoria) but tonight it helped get our offence going for the third period,” Benson said.

The Royals five-minute power-play to start the period was cut to three minutes after Noah Gregor took a needless penalty after he was called for holding the stick, skating to his bench with a Giants’ players stick wedged under his arm.

Less than three minutes after the major expired, Milos Roman was parked in front of the goal and in great position, deposited a rebound past Outhouse for this third goal in as many games.

Gregor would break Tendeck’s shutout bid 72 seconds later, with his shot squeaking through Tendeck’s legs on the power-play. But James Malm would take a pass from Roman in the slot and restore the four-goal lead.

Roman finished with a goal and two assists while Benson, Ronning and Brendan Riddle each had two point games.

“It was a variety of guys and that is what you need at this time of year,” McKee said.

Tendeck finished with 35 saves as Victoria outshot the Giants 36-33.

“He didn’t miss a beat, he was unreal. He really held us in there and gives us a lot of confidence,” Benson said.

The Royals will look to even the series in game four before the teams head to Victoria for game five on Saturday.

“I know its a cliche but that’s really true: you can’t look too forward, you just have to focus on the task at hand,” he said. 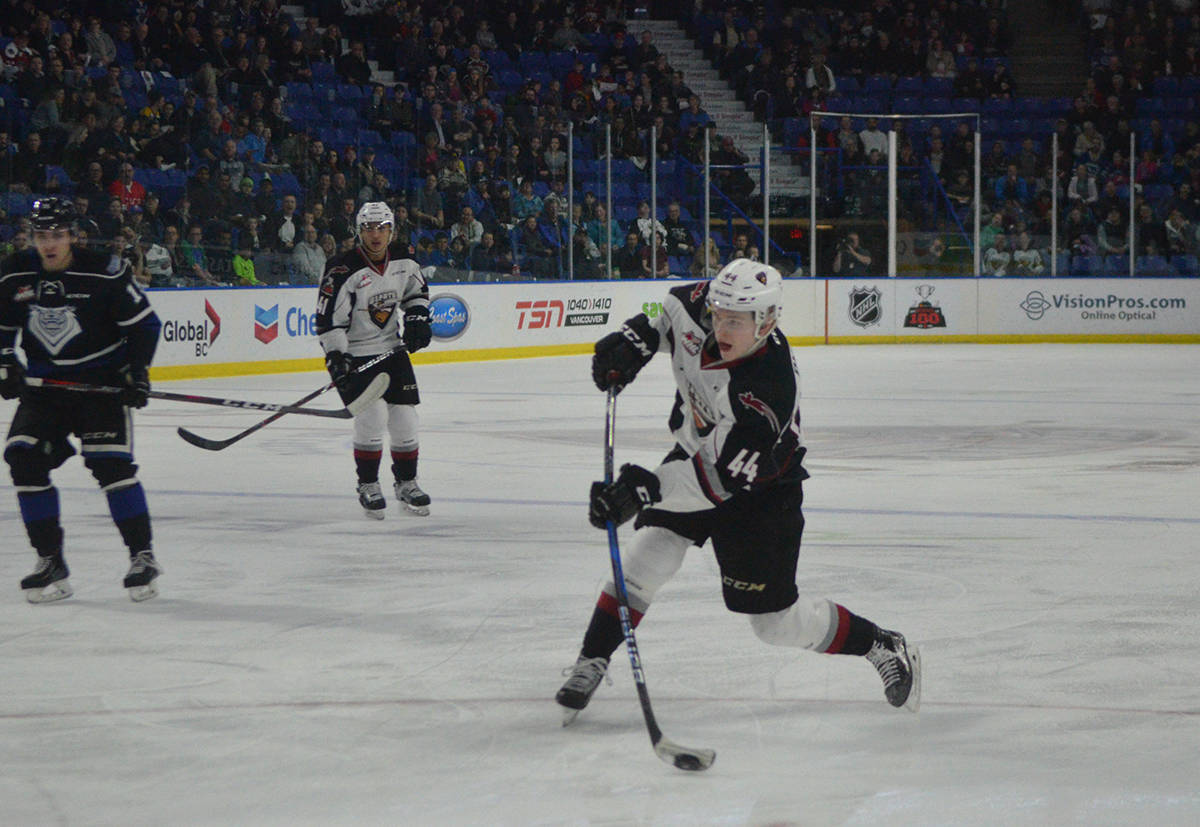 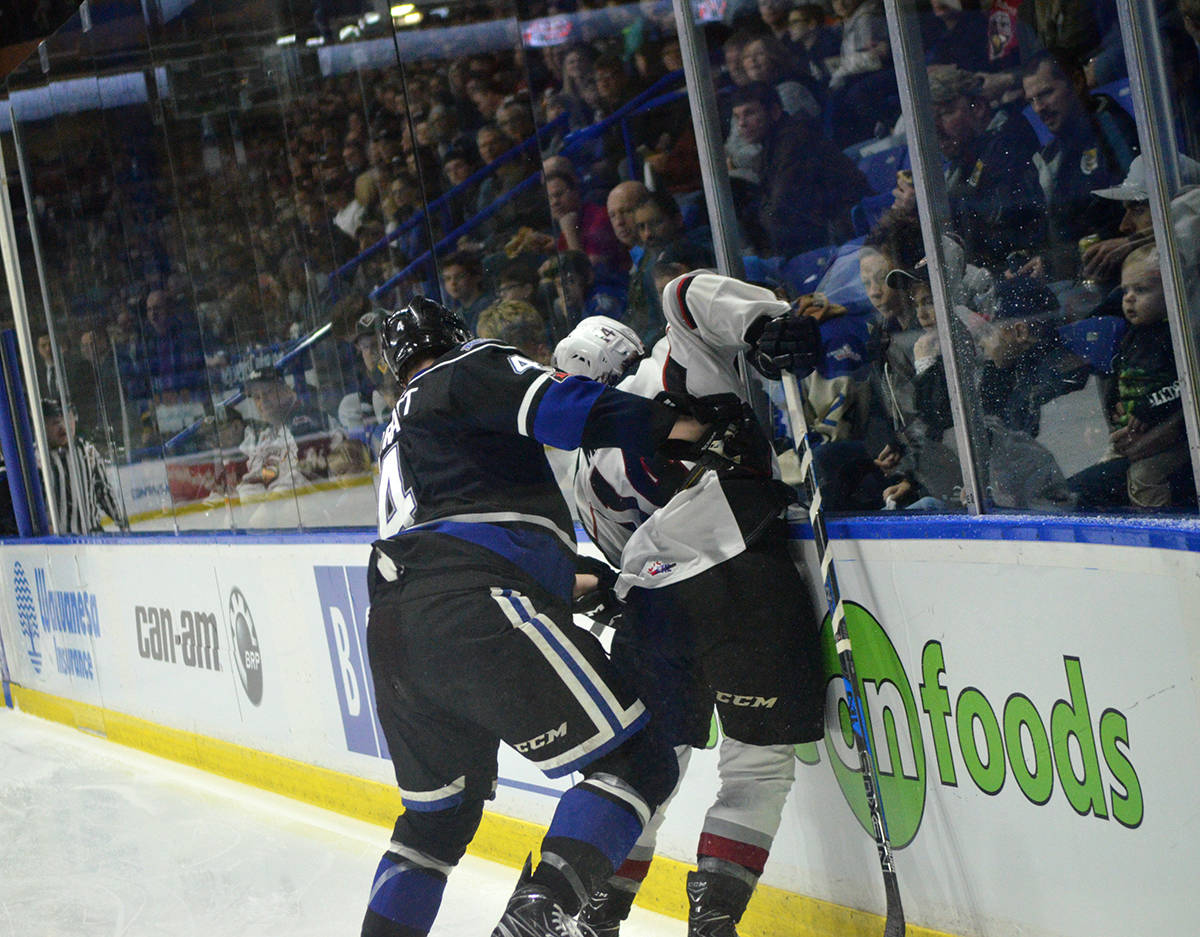 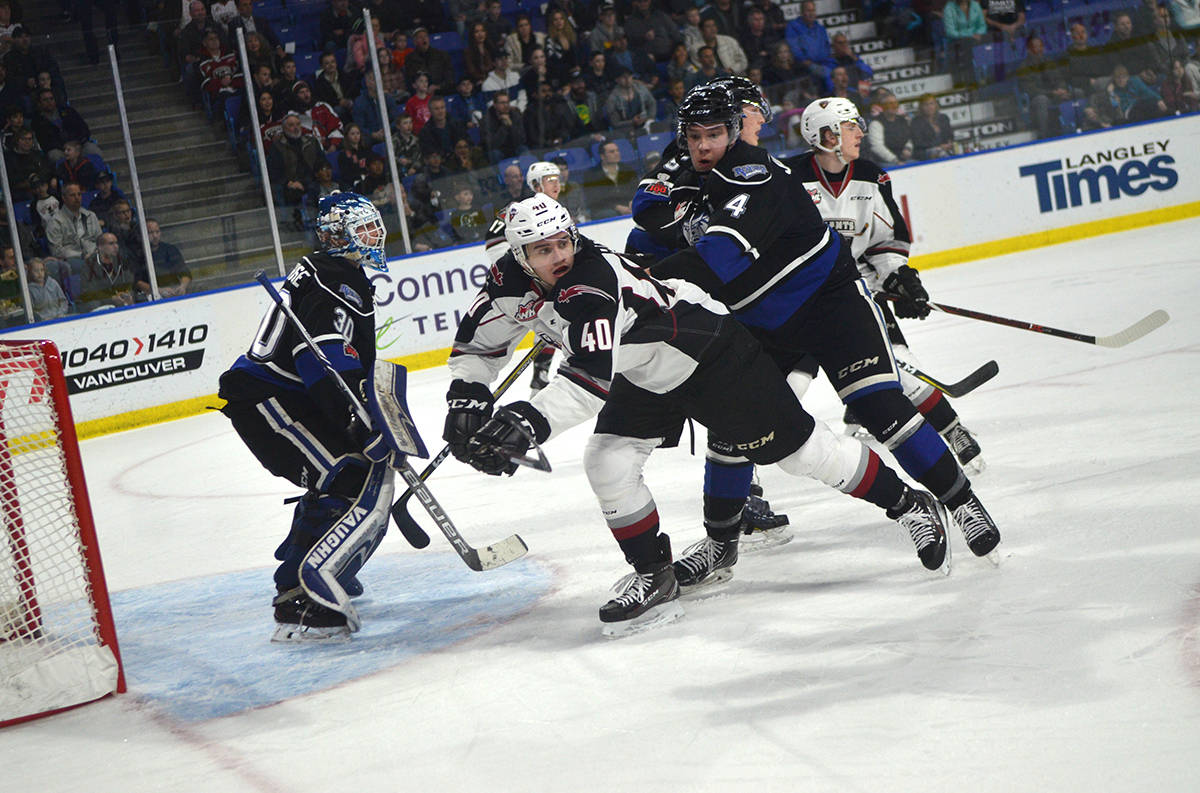 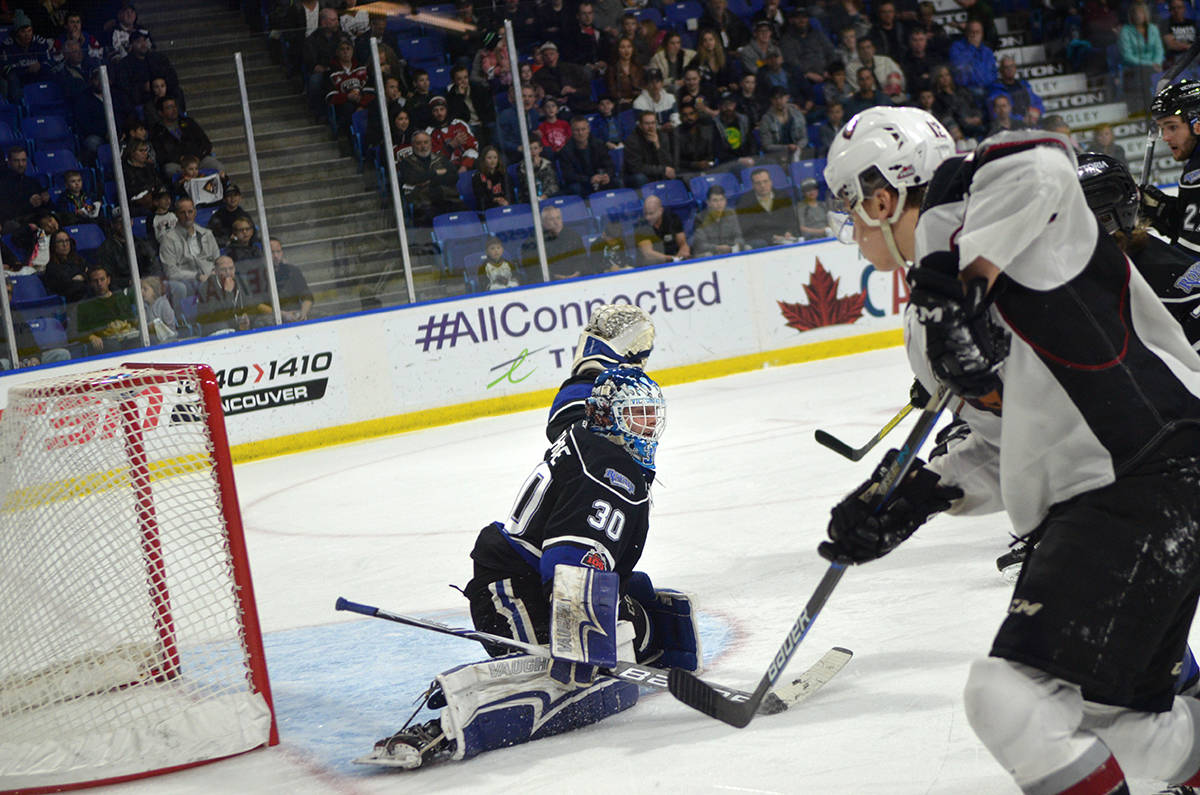