Vancouver Giants wrapped up 2019 on a winning note. heading into the new year riding a three-game winning streak.

Cole Shepard paced the Giants with two goals and an assist while Tristen Nielsen, Michal Kvasnica and Tyler Preziuso all contributed to the win.

Trent Miner stopped 25 of Kelowna’s 27 shots to help lead the Giants to their 17th win of the season and their third in as many tries against the Rockets.

Giants head coach Michael Dyck said the team got off to a quick start.

“In the first period we were opportunistic and utilized our speed well,” Dyck observed.

“We got the puck moving quickly to areas where we could skate onto it and took advantage of our opportunities,” Dyck added.

Shepard said the team “all just bought in.”

We played hard, played to our game and that’s why the score was 6-2.” Shepard commented.

At 2:48 into the first period, Tristen Nielsen and Tyler Preziuso combined on a shorthanded two-on-one to give the Giants a 1-0 lead. Preziuso finished off the Nielsen feed from the left-wing to secure his 14th goal of the season.

Rockets responded 31 second later on the same power play when Liam Kindree one-timed home his fifth of the season past Trent Miner from the right-wing circle.

Jackson Shepard restored the lead for the Giants at 4:31 off another two-on-one chance. Michal Kvasnica carried the puck down the right-wing and centered a pass for Shepard who did the rest, tucking his sixth of the season by Cole Schwebius.

Then, the younger Shepard brother got in on the scoring act at 10:34. Cole Shepard took a breakaway feed from Michal Kvasnica and snuck a backhand shot through Schwebius’ pads and home for his seventh goal of the season.

However, Cole Shepard wasn’t done. He ripped home his eight of the season on a power play at 17:34 off a shot from the left-wing circle. Tristen Nielsen and Tyler Preziuso both assisted on the play.

Early in the second period, Cole Shepard earned his third point of the game when he assisted on Zack Ostapchuk’s third goal of the season. Ostapchuk took a Shepard pass, skated in close and roofed his shot over Cole Schwebius’ left shoulder.

Milos Roman notched Vancouver’s final goal of the night at 14:24 of the middle frame off a shot from the high slot. Justin Sourdif had the lone helper on Roman’s 50th career WHL goal.

In the third period, Liam Kindree struck for a second time at 16:30 while shorthanded. He forced a turnover inside the Giants zone and roofed his sixth of the season over Trent Miner’s shoulder to make the final score 6-2 in favour of the Giants.

Stars of the game were all Giants players, with Cole Shepard first, then Tristen Nielsen and Seth Bafaro.

Thanks to their victory, the Giants now sit three points back of Kelowna for second place in the B.C. Division standings.

They improved to 3-0 on the season against Kelowna and 2-0 against them at home.

Giants remain two points back of Victoria for third place in the B.C. Division standings.

Milos Roman recorded the 50th goal of his WHL career in the second period of Saturday’s game.

Next Giants game goes Wednesday, Jan. 1st at 2 p.m. against the Victoria Royals at the Langley Events Centre. 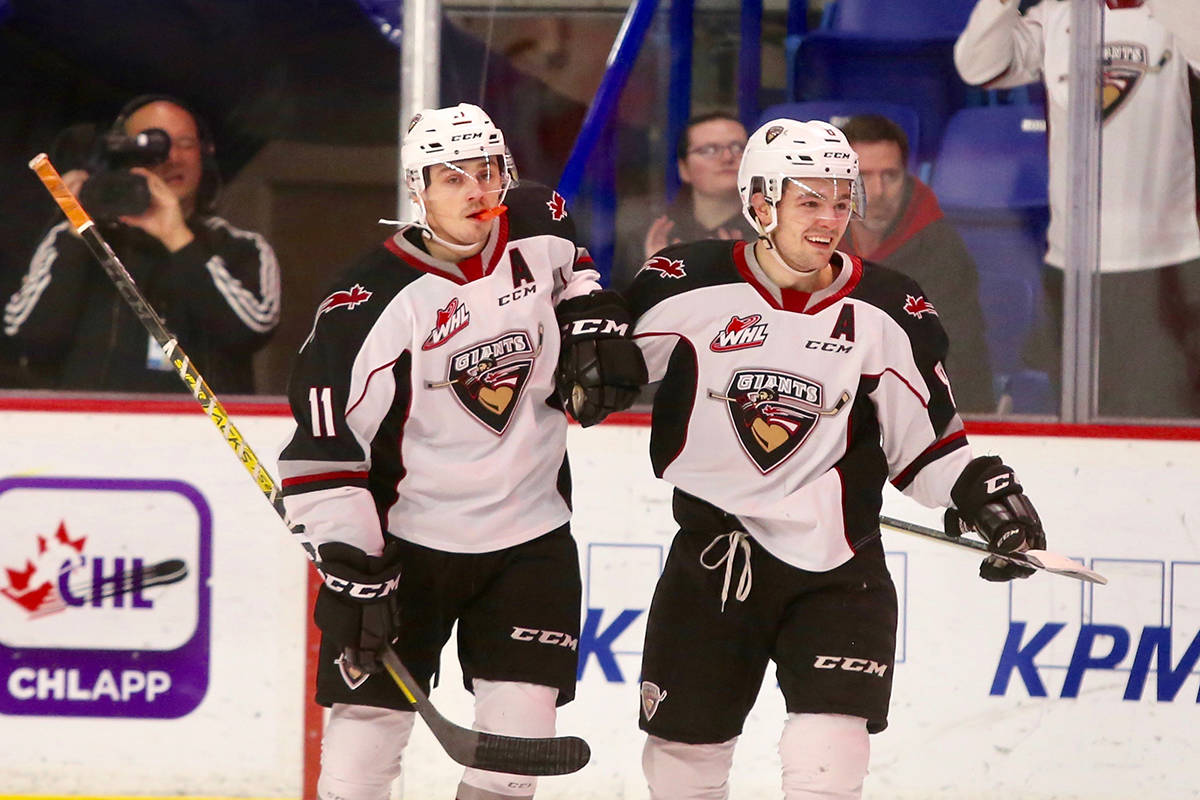 In the first period, at 2:48 into the game, Tristen Nielsen and Tyler Preziuso combined on a shorthanded two-on-one to give the Giants a 1-0 lead during Saturday’s (Dec. 28) 6-2 win at Langley Events Centre. (Rik Fedyck/special to Langley Advance Times) 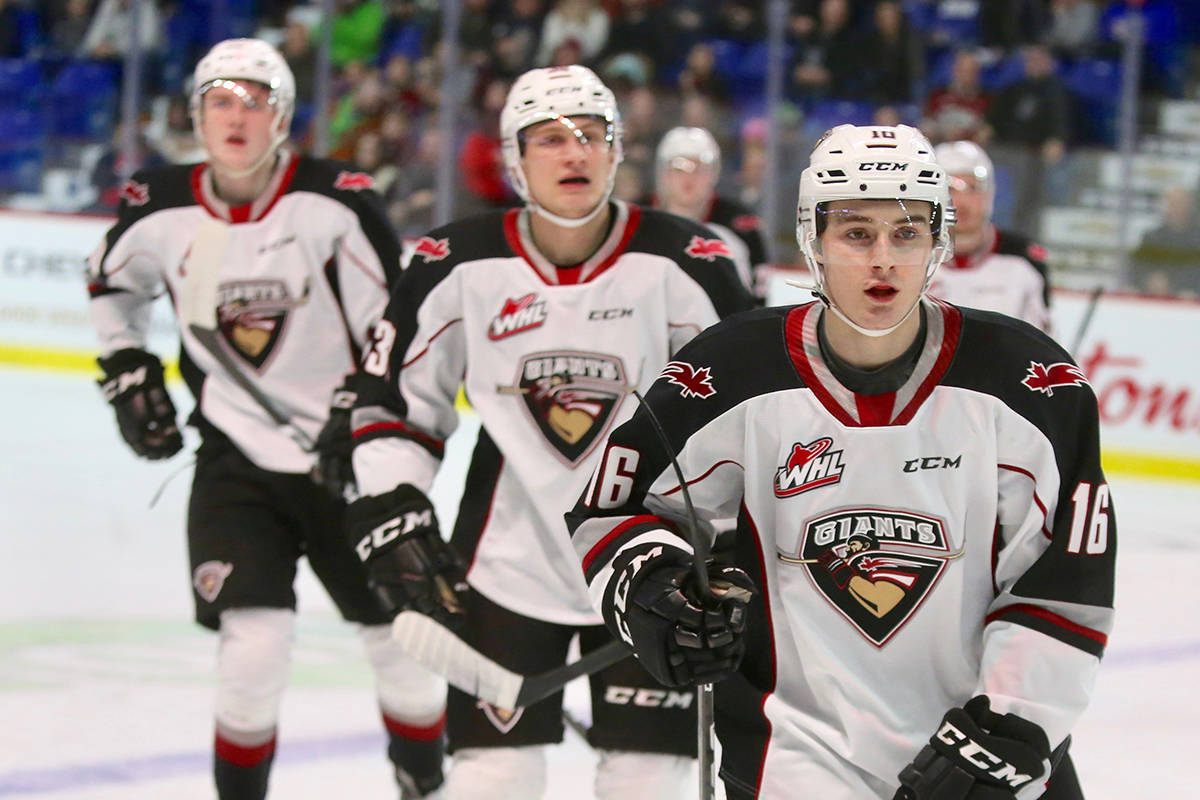 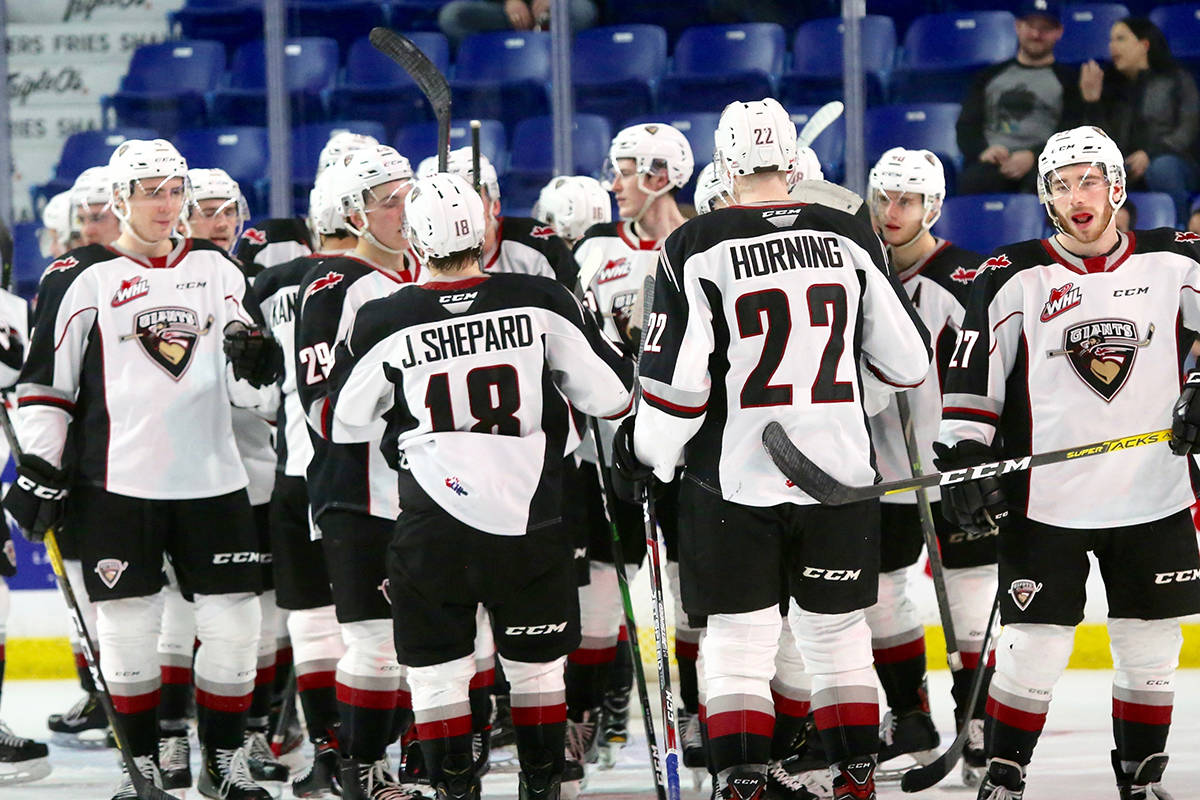 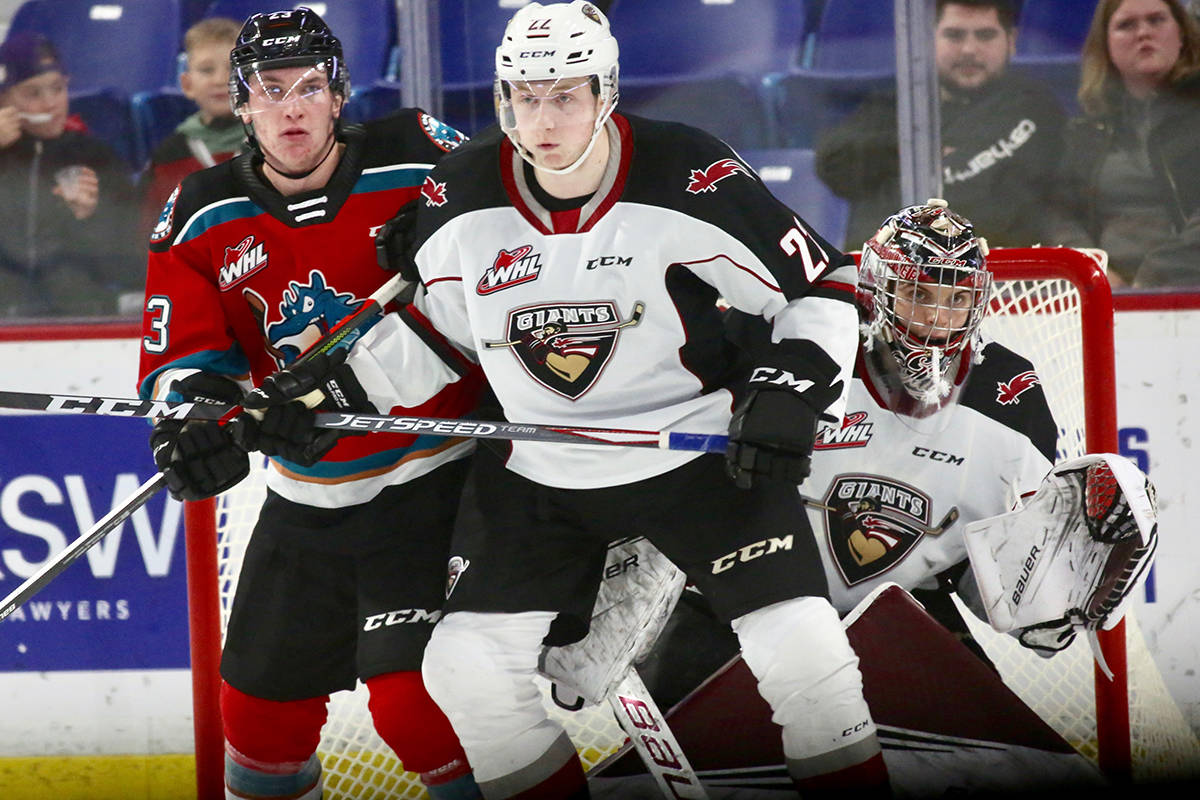