Injuries that could have been a career-ender couldn’t keep Langley’s Joel Harrison off the soccer field.

Harrison, currently one of three team captains for the University of Michigan men’s soccer team, spent 22 months wondering if he would ever play again, following a season-ending injury at a 2016 recruiting showcase in Florida with the Vancouver Whitecaps Academy that sent him off the field in an ambulance.

He suffered a double sports hernia during the first five minutes of the game, before the coaches from Michigan could see him play.

“Just as the coaches were arriving to watch our game I was being carried off the field,” Harrison recalled, describing it as a “major blow.”

Harrison had demonstrated unmistakable talent playing for the Whitecaps FC residency program in grade 11 and grade 12.

He was so committed, he transferred from Walnut Grove Secondary to Burnaby Central so that his school work would fit in the team training schedule.

Over those two years, he was able to work his way up in the club, eventually making his professional debut with the Whitecaps FC 2 during the summer of 2016.

That record, as it turned out, did not go unnoticed by the Michigan coaches.

“Almost every college wanted to wait until I was healthy again so they could see me play in person before making any offers,” Harrison recalled.

“All except for Michigan, who were willing to take a risk and offer me a spot on their roster without seeing me play.”

For a long 22 months, it “seemed like it was an unsuccessful gamble,” Harrison recalled., as he underwent countless hours of physiotherapy and treatments that included a bilateral surgery in January of 2018.

”There were some extremely difficult times where I questioned whether I would ever kick a soccer ball again, or even be able to run,” Harrison related.

After making his collegiate debut and playing his first match in 22 months, Joel Harrison led us in The Victors! #GoBlue pic.twitter.com/ZiDgJKLgEw

But finally, on October 3, 2018, he made his college soccer debut as a substitute in a 2-1 win by the Wolverines over Oakland University.

It wasn’t until he played a full 110 minutes, including overtime, against Notre Dame, that he felt like he’d made a comeback.

“It was the first time I genuinely felt like the player I was prior to my injury,” he said.

In 2019, his junior year, he got an entire season under his belt.

And what a season; after being named one of the team captains in 2019, the team set a program record for shutouts and goals-against average, and reached the NCAA tournament for the third consecutive year.

They played in the Big-10 Conference finals and went to the Sweet Sixteen of the NCAA tournament.

“Looking back at what has been an unpredictable 3 years at Michigan, the patience and trust of my family, coaching staff, and teammates is what I value the most,” Harrison declared.

“Nobody ever doubted my return, and in fact for 22 months they assured me of the immediate impact I would have on the team. Starting from the day I went down injured in Florida to the place I am now, it has been a complete team effort and I do not know where I would be without them.”

Harrison was the third Wolverine in the 20-year history of the program to receive Academic All-America honors which requires student-athletes to have a minimum 3.3 grade-point average.

A University of Michigan report noted Harrison is one of 12 engineers from various Midwestern universities and across different engineering disciplines who are working on building a mechanical arm for a high school principal who is unable to afford one. 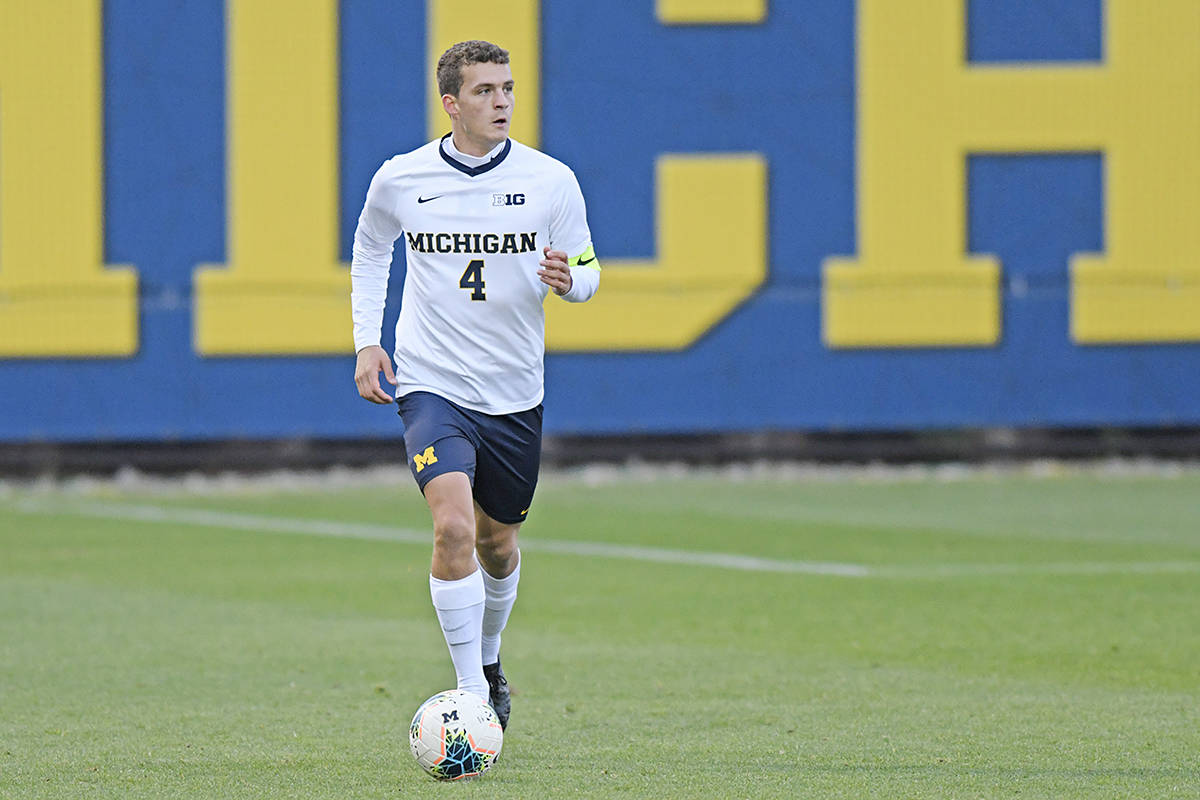 Joel Harrison, seen here on the University of Michigan men’s soccer team playing against Wisconsin at the U-M Soccer Stadium in Ann Arbor, Mich., on Friday, Oct. 25, 2019, came back from serious injuries that took 22 months for him to recover (U-M Photography/special to Langley Advance Times)