This year was different.

Bears dominated their rivals to post a lopsided win in the bantam division (ages 14-15) but Kodiaks were unable to overcome a slow start to take the midget division (ages 16-18) again.

Bears beat the Cowichan Bulldogs 58-7 in the early afternoon match at McLeod Athletic Park in Langley on a clear, but cold Sunday (Dec. 1).

Bears head coach Jason Williams said the team was confident going into the game, but wasn’t expecting a blowout.

“It was beautiful,” Williams told the Langley Advance Times, recalling the previous year’s win was considerably closer (a narrow 7-6 victory over North Surrey).

Bulldogs may have sowed the seeds of their own destruction when they sent Bears running back Jordan Tomika off the field with a concussion early in the game.

“We went all air after that,” Williams related.

As it turned out, the Bulldogs were not expecting a passing game.

“They prepared for the run and we went for the throw,” is how Williams summed it up.

It helped that the team had Owen Sieben throwing passes, a player Williams described as the “best U16 quarterback” in the league, who was named most valuable player.

“He was MVP for a reason,” Williams stated.

And there was also the fact that star receiver Mathieu Gale was at the other end of those passes.

All of the team deserved praise, Williams stressed.

This year, both Langley teams returned to play under slightly different rules

Ken Sieben, president of North Langley Football Association, who is also offensive coordinator for the Bears, noted that last year, the teams played 12 players to a team, while this year, it was nine.

“We would’ve had enough to make a 12-man team, we could have declared a 12-man, but we would be the only one,” Sieben estimated.

He called the first quarter of the Bears versus Bulldogs game “a little rough, until we found our legs.”

Offensively, the Bears offence spent virtually the whole game in the air, running next to no passing plays, something Sieben said was a first for him.

He credits a Bears offensive line who averaged around 50 points a game and an equally effective defence that kept rival offensive players at bay.

“We only had to get two touchdowns per game to win [on average],” Sieben said.

In the last game of the day, Kodiaks were looking to repeat last year’s win over the Victoria Spartans, but it was not to be.

By the end of the game, the Kodiak’s offence began to fire on all cylinders, but by then it was too late to overcome the rival teams’ lead, ending in a 29-16 defeat for Langley.

“If there had a been a fifth quarter, we would have won,” Kodiaks head coach Jim Pattenden commented.

“They didn’t manhandle us,” Pattenden elaborated.

“We moved the ball, we just didn’t move it far enough.”

“There were two scores where we just didn’t have a guy where we should have.”

Pattenden added the midget football team was put together late in the season.

“We didnt have a team till the back half of August.”

While he commended Victoria for their winning effort, Pattenden also praised his own players.

“I am very proud of the boys. I think they put a great game on the field.” 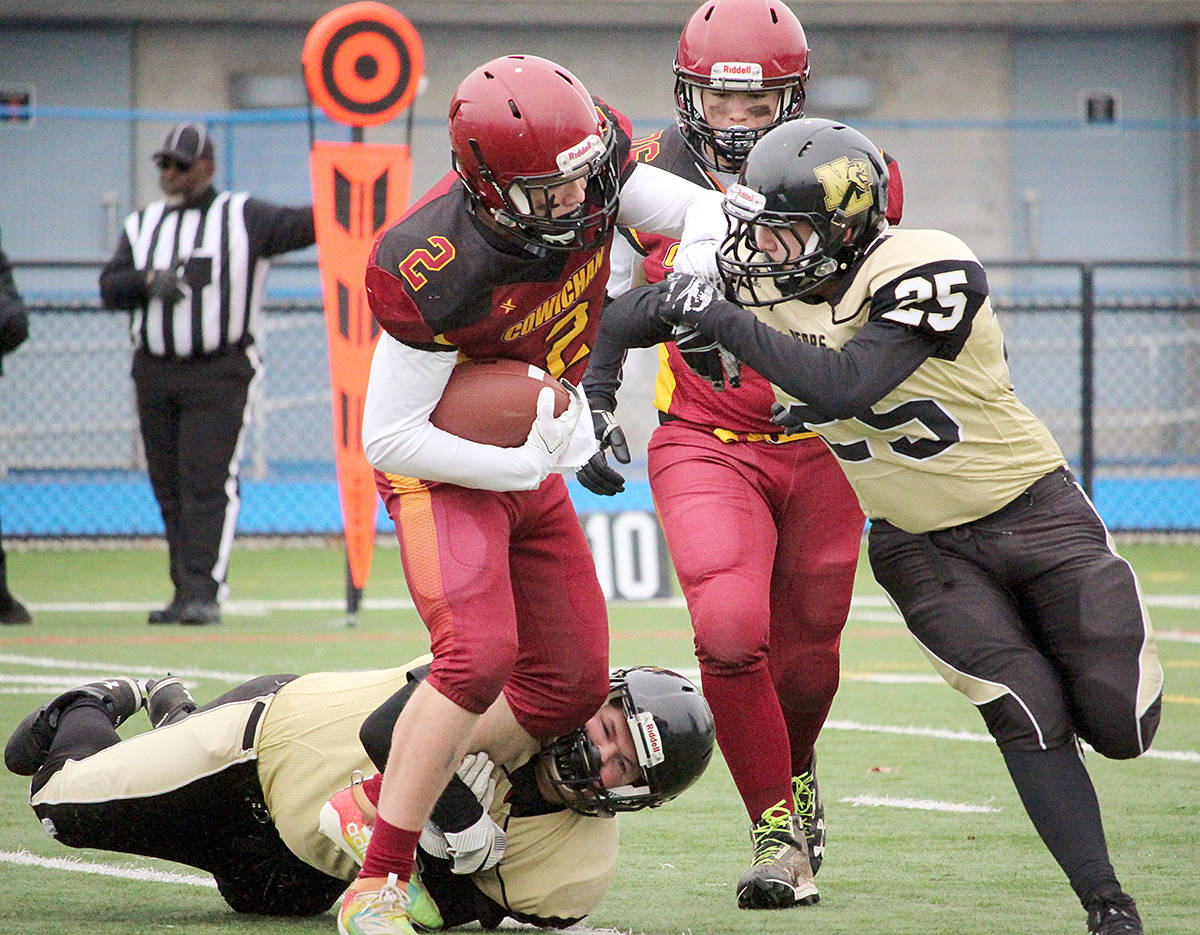 A Cowichan player ran into Bears players Taylor Bear and Ethan Sledding during play against the Cowichan Bulldogs on Sunday, Dec 1. at McLeod Athletic Park in Langley. (Tina Patterson/Special to the Langley Advance Times) 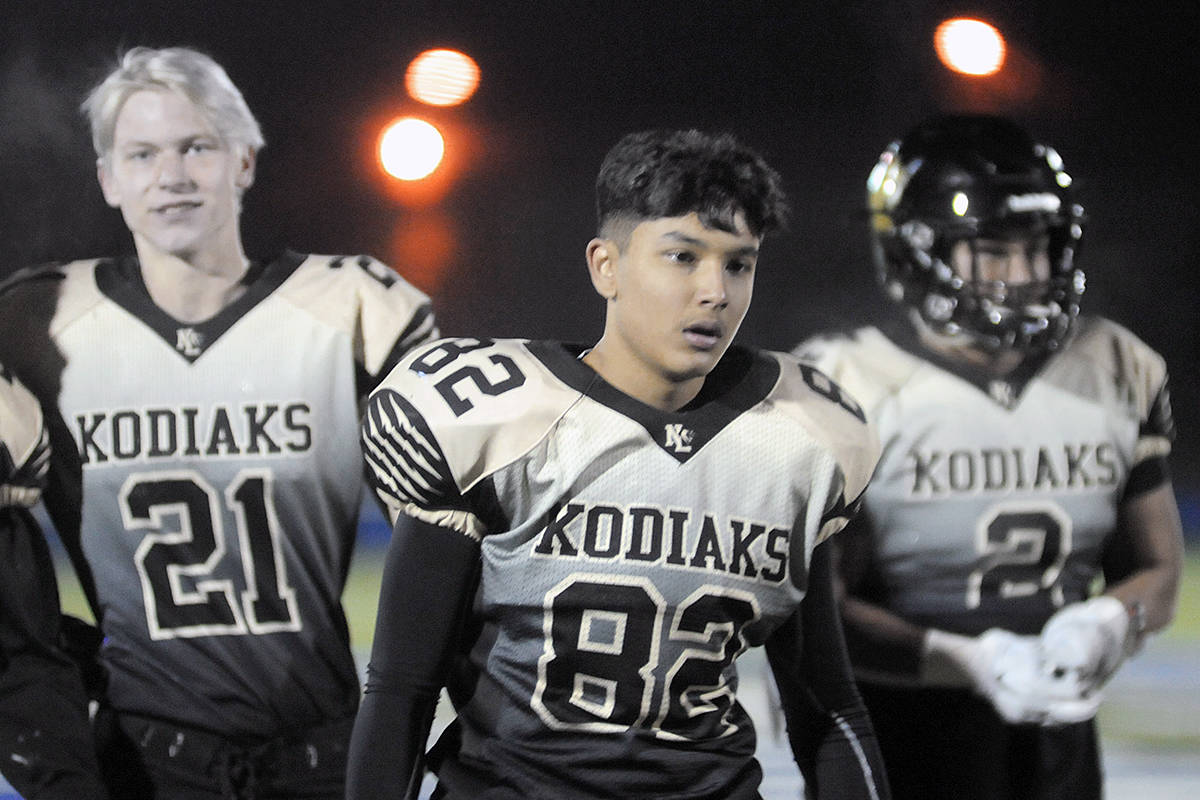 Frustration showed on the faces of Kodiaks players Scott Pavitt, Sameer Ahmed and Jacob Kidanemariam as they left the field during a break in the action at McLeod Athletic Park. (Dan Ferguson/Langley Advance Times) 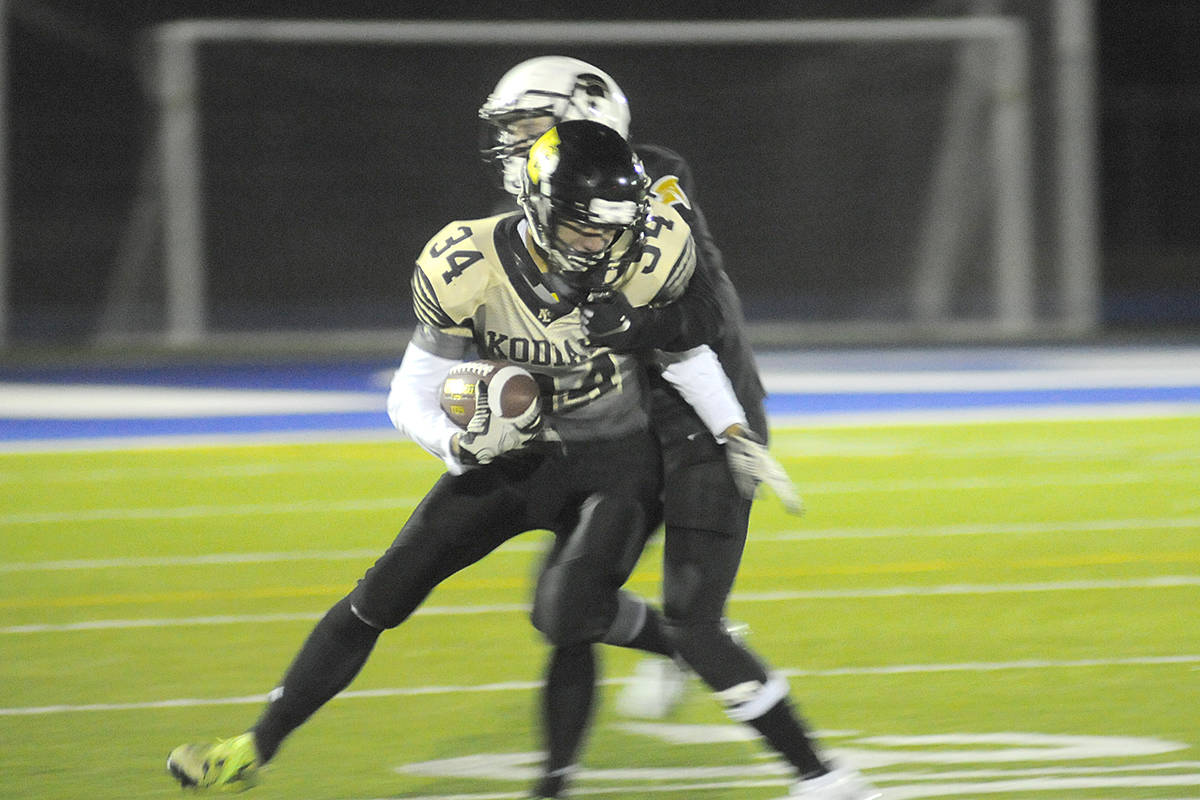 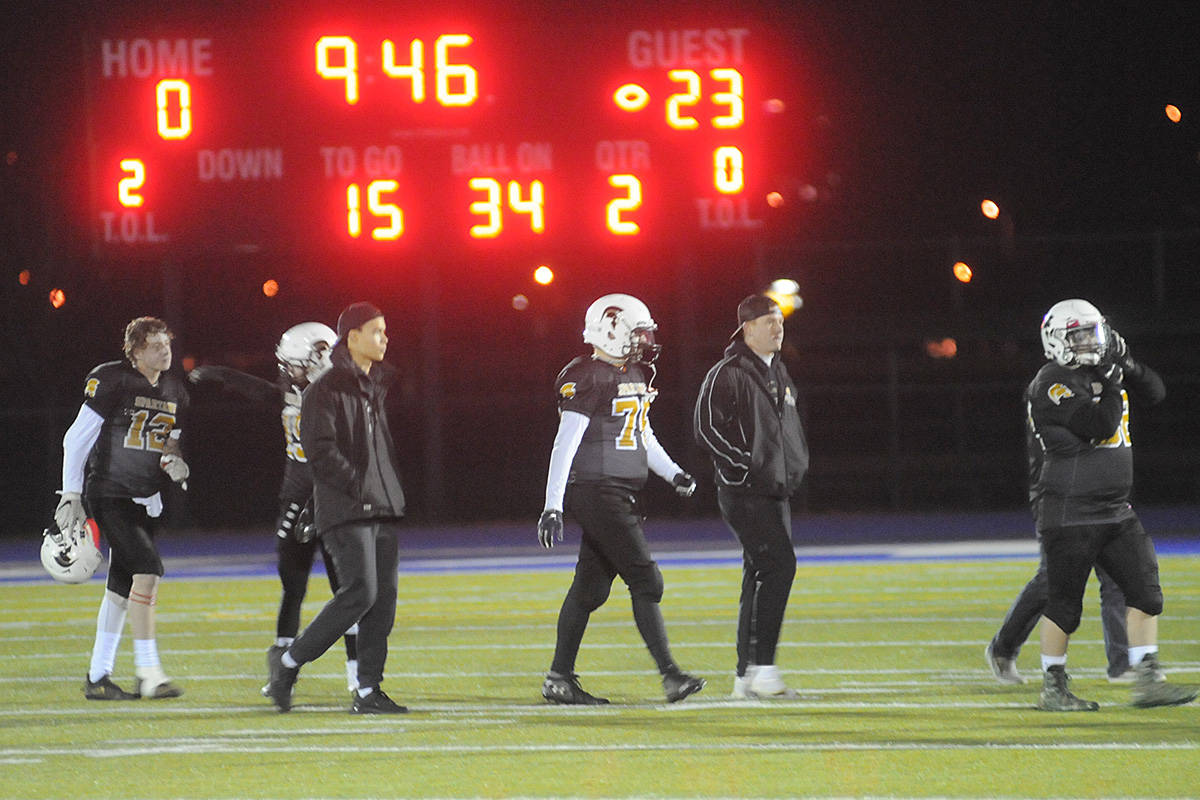 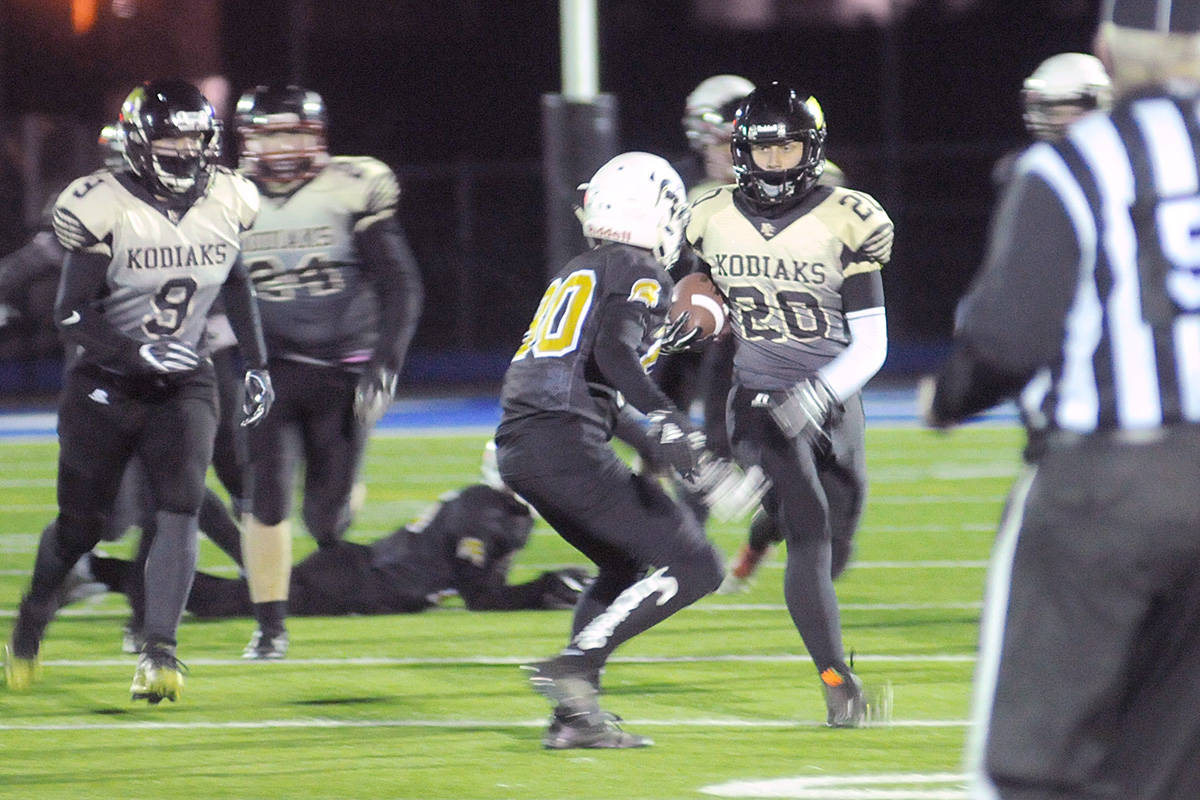 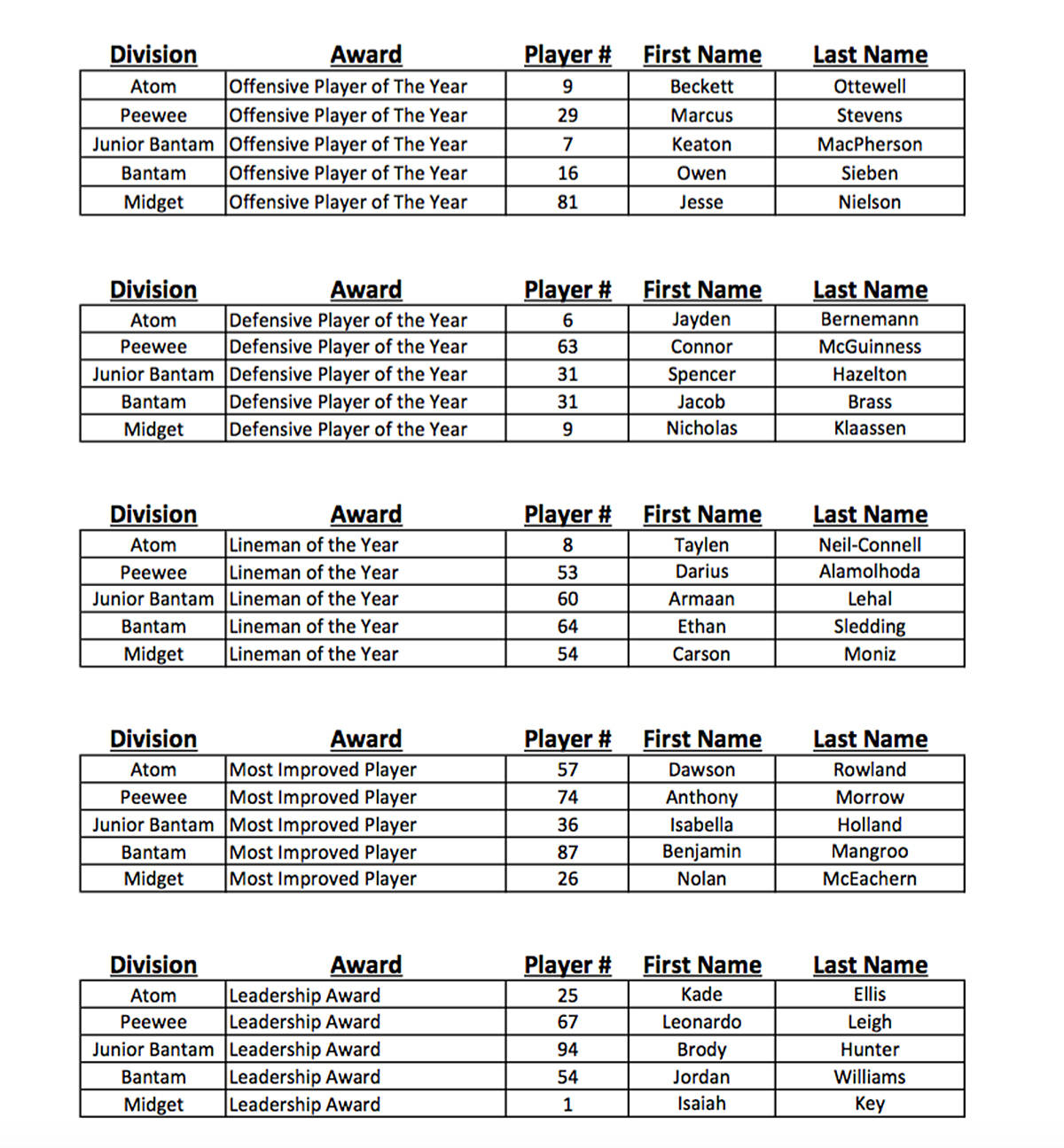