It was a record-setting night for the Vancouver Giants as they scored a franchise-best dozen goals to post a season-high fourth straight victory.

Despite controlling play early, the Giants trailed 1-0 before goals from Tyler Preziuso and Holden Katzalay on consecutive shots quickly erased that deficit and propelled Vancouver to a 12-4 win over the Tri-City Americans in Western Hockey League action on Tuesday night at Langley Events Centre.

Bowen Byram beat the first intermission buzzer, scoring with less than two seconds to play, for a 3-1 lead. The Giants added three more goal in the opening 4:15 of the middle stanza and the rout was on. The team was ahead 7-2 after 40 minutes before tacking on another five in the third period.

When all was said and done, 17 of the 18 Vancouver skaters had at least one point and 10 players found the back of the net, led by two goals apiece from Michal Kvasnica and Preziuso. The line of Katzalay (one goal, two assists), Cole Shepard (four assists) and Kvasnica (two goals, one assist) finished with three goals and a dozen points.

Tristen Nielsen, Connor Horning, Seth Bafaro, Milos Roman and Justin Sourdif each had a goal and an assist while Bowen Byram had a goal and two helpers. Kaden Kohle also scored his first career WHL goal.

Vancouver’s power play also continued its sizzling play of late scoring three times in four opportunities. The man-advantage unit is now 17-for-38 (44.7 per cent) in its last 10 games. By comparison, it was 15-for-128 (11.7 per cent) for the first 38 games of the season.

READ ALSO: VIDEO: Vancouver Giants make it three in a row with win over Kamloops Blazers

Head coach Michael Dyck was happy with his team’s response when they fell behind 1-0 as well as the fact the Giants did a good job of maintaining their habits on the ice despite the lopsided score.

“A lot of younger guys were given more opportunity tonight and they played well,” the coach added.

The final shots on goal were 58-19 for the Giants with Sasha Mutala scoring twice (the second on a power play) and Samuel Ho and Jadon Joseph adding one goal apiece.

“It is great for the confidence (to have won four straight). Guys are coming into the room happy and confident and that is really important for a successful season,” Katzalay said. “But we are not going to change anything, just keep working hard and hopefully good things keep happening.”

The win improved Vancouver to 23-20-3-2 which is good for third spot in the WHL’s B.C. Division. It also pulls them within six points of second-place Victoria with the Giants still holding a game in hand.

Up next for Vancouver is a pair of divisional games this weekend, Saturday against Prince George at 7 p.m. and Sunday at 4 p.m. versus Kamloops. Both are at Langley Events Centre as the Giants continue a season-high five-game homestand.

“We need to take advantage of playing here. It is a great atmosphere, it is a hard building to come into and we have to start taking advantage of that,” he said. 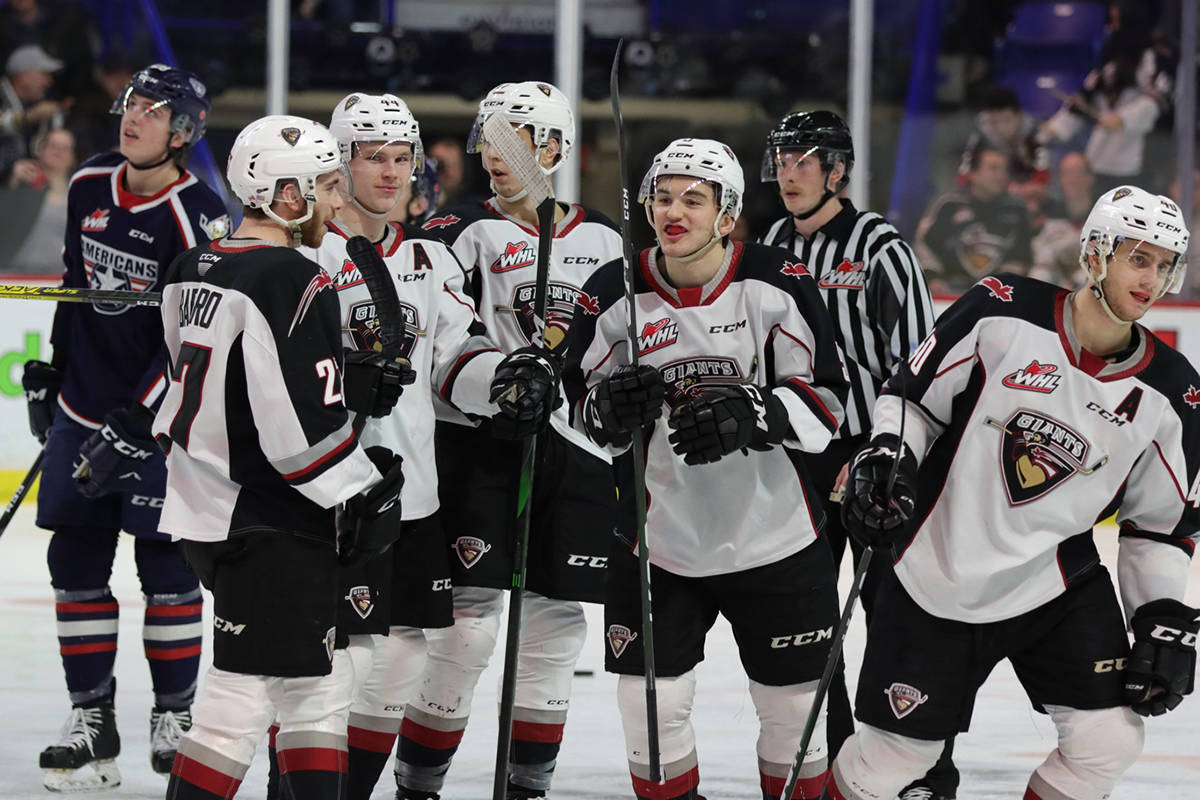 Giants scored a franchise-best dozen goals to down the Tri-City Americans 12-4 at the Langley Events Centre on Tuesday, Feb. 5 (Rob Wilton/special to Langley Advance Times) 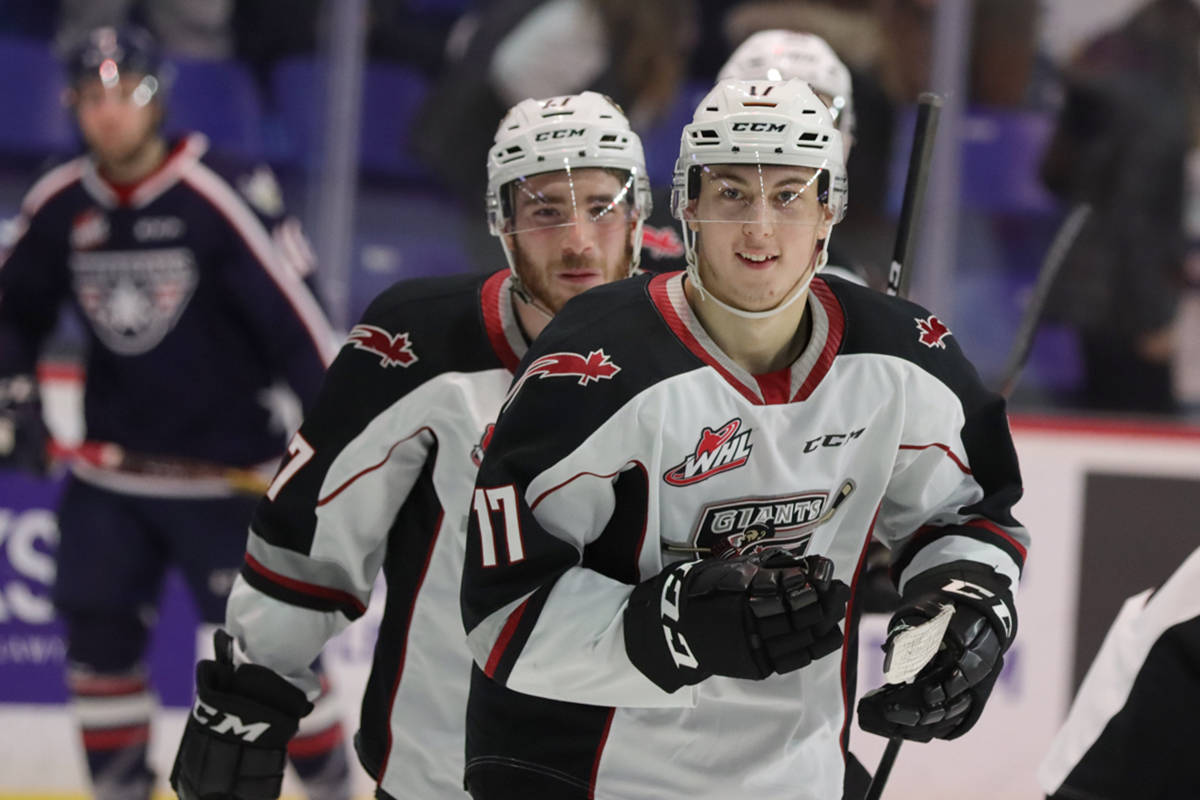 Giants celebrated often as the team scored a franchise-best dozen goals to down the Tri-City Americans 12-4 at the Langley Events Centre on Tuesday, Feb. 5 (Rob Wilton/special to Langley Advance Times) 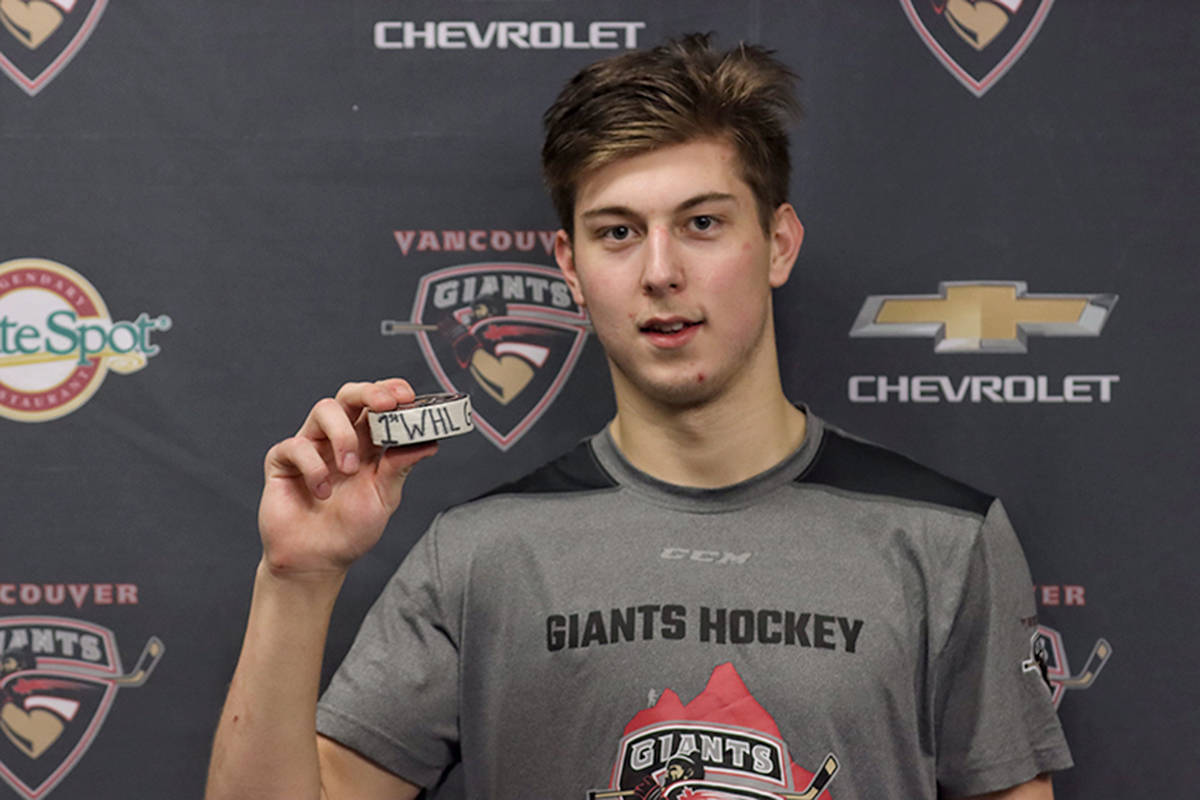 Kaden Kohle scored his first career WHL goal as the Giants scored a franchise-best dozen goals to down the Tri-City Americans 12-4 at the Langley Events Centre on Tuesday, Feb. 5 (Rob Wilton/special to Langley Advance Times)

‘Sick Out’ aims to pressure schools over masks, class sizes