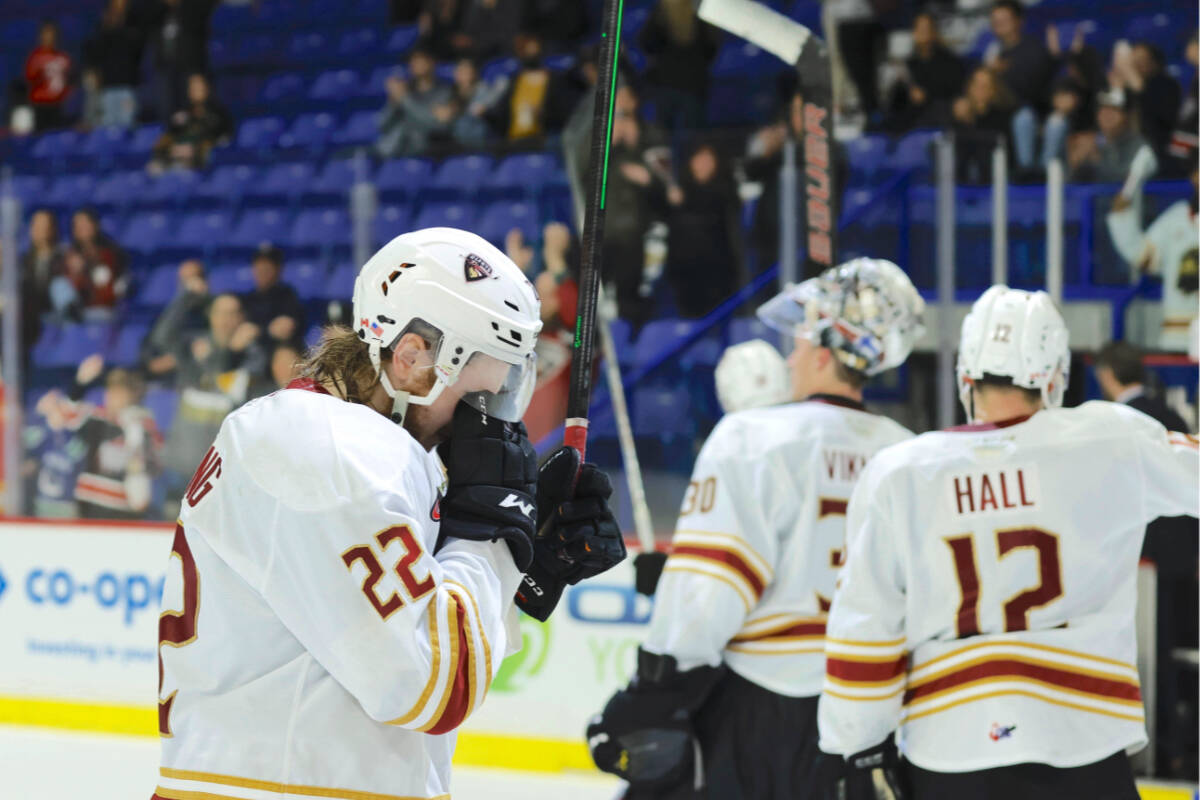 It was an emotional moment for Connor Horning as the Cinderella playoff run for the 2022 Vancouver Giants came to an end Sunday afternoon, May 15, at the Langley Events Centre. (Rob Wilton/Special to Langley Advance Times) 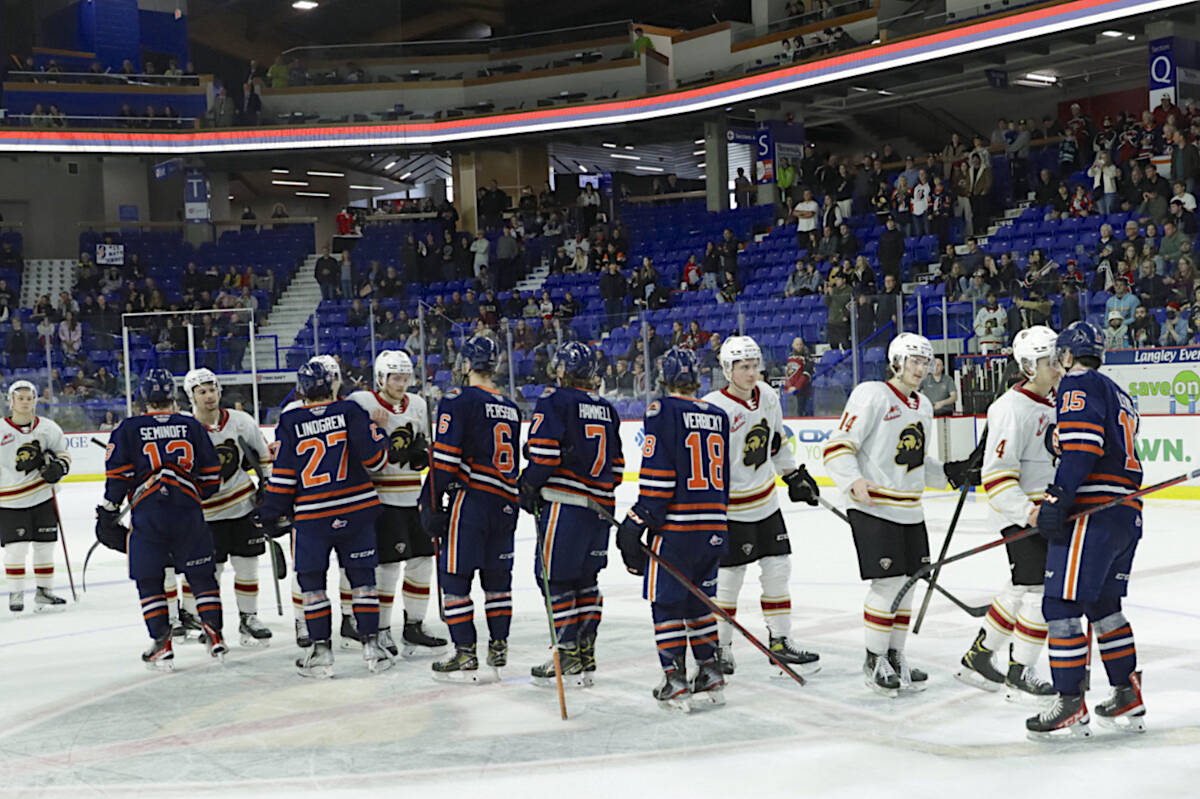 The Cinderella playoff run for the 2022 Vancouver Giants came to an end Sunday afternoon, May 15, at the Langley Events Centre as the Kamloops Blazers skated to a 6-0 shutout victory. (Rob Wilton/Special to Langley Advance Times) 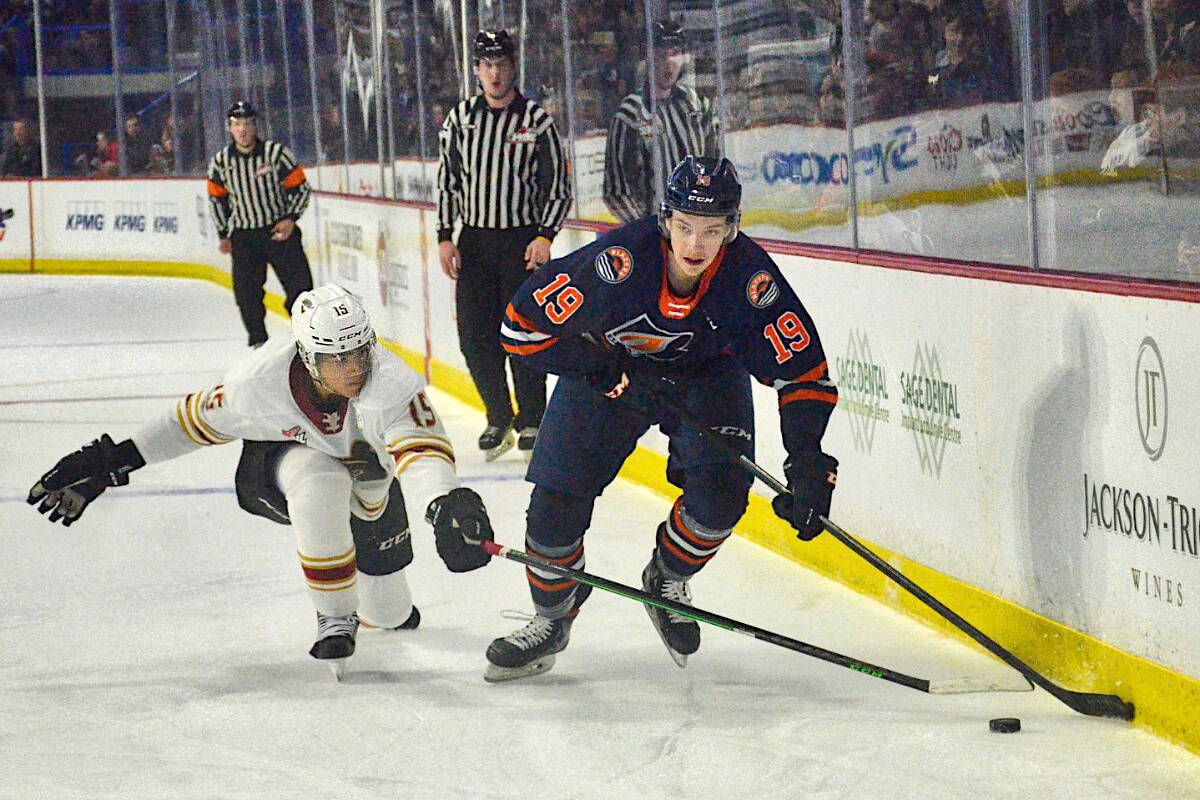 The Vancouver Giants’ improbable playoff run came to an end on Sunday, May 15.

The Giants backed their way into the Western Hockey League post-season with just one win in their final dozen regular season games to claim the last playoff berth in the Western Conference – and by just a single point – but then proceeded to make history, becoming the first eighth seed to defeat a No. 1 seed since the WHL expanded to 16 teams in 2002.

But in round two, Vancouver could not replicate that first-round magic, falling in six games to the No. 2 seed Kamloops Blazers, a team 46 points superior to the Giants in the regular season standings. Kamloops won game six by a 6-0 score on Sunday at Langley Events Centre, to win the series four games to two.

Fraser Minten opened the scoring with a shorthanded breakaway goal 6:06 into game six and the Giants never seemed to recover as the Blazers scored two goals apiece in each of the three periods.

“Anytime you give up a short-handed goal, it is a dagger. I think we continued to play but I think we just ran out of gas,” said Vancouver coach Michael Dyck.

For one last time in 2021-2022, Michael Dyck shares his postgame thoughts. pic.twitter.com/ABqKDXMPBE

Luke Toporowski made it 2-0 a few minutes later before Daylan Kuefler and Logan Stankoven added second period goals. Toporowski with his second and Caedan Bankier rounded out the scoring with third-period tallies. Dylan Garand made 24 saves to earn the shutout.

The win advances Kamloops to the Western Conference championship round against either Portland or Seattle.

“Deep, fast. We knew it was going to be a tough series. They were one of the top teams in the conference for a reason,” Dyck said about a Blazers squad which beat Vancouver 10 times in a dozen regular season games before the Giants gave them a battle in the second round.

Prior to the lopsided score in game six, total goals were just 15-14 in favour of Kamloops.

RECAP: The Cinderella run came to an end for the Giants on Sunday after a Game 6 loss to Kamloops. To Connor Horning, Adam Hall and Alex Cotton – We thank you for your positive contributions to the Vancouver Giants and @TheWHL.

Ahead of the playoffs, Vancouver was not expected to put up much of a fight, given how their regular season had unfolded.

“For the older guys, I am just glad they got to experience something like this. Nobody has really had any playoff experience,” Dyck said about the fact there has not been any playoff hockey for a few seasons now. “For the younger guys, this is gold: to learn how hard it is to win. You can talk about it, you can show videos from the NHL playoffs, but until you experience it, you really don’t know for sure.”

“All three of them, they played so well for us down the stretch,” Dyck said. “All three guys left it all out there.”

Langley’s Cotton appeared in 200 career WHL regular games playing for Lethbridge and Vancouver and an additional 19 in the playoffs.

During the regular season Cotton produced 44 career goals along with 98 assists for 142 points. 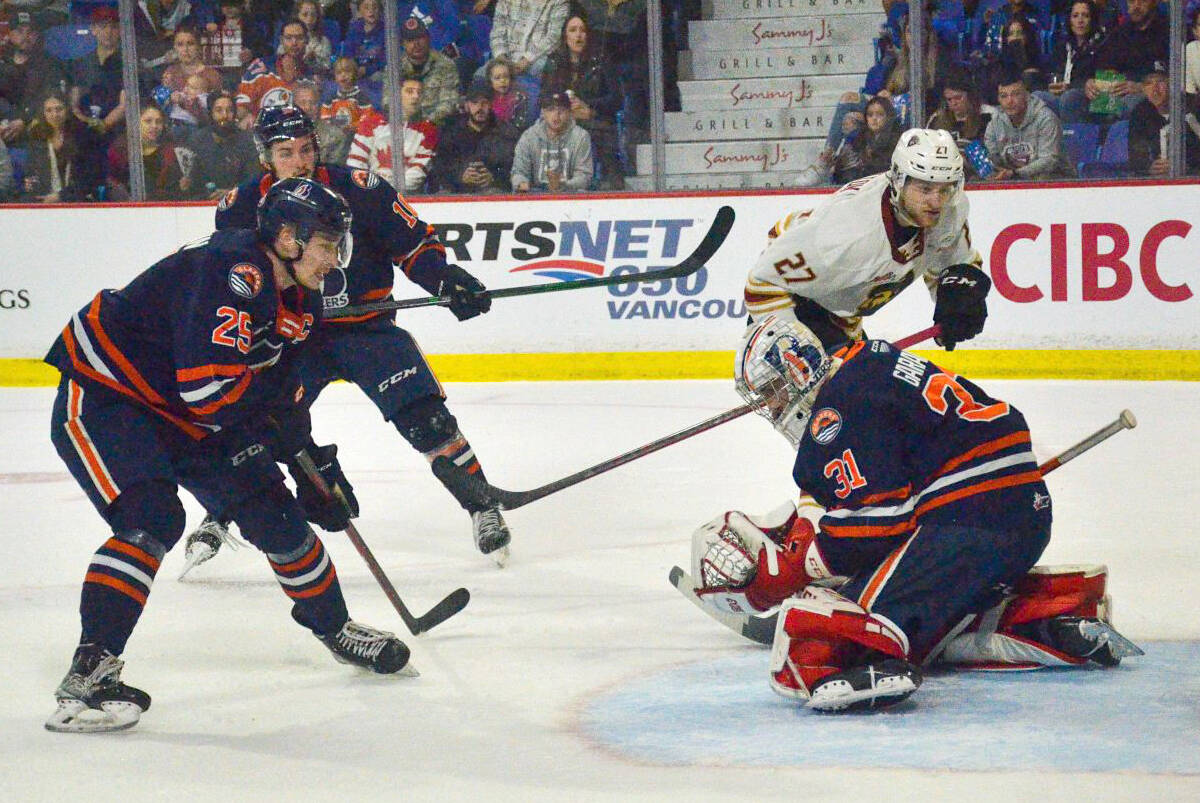 Langley’s Alex Cotton played his final game as a Giant as their Cinderella playoff run came to an end Sunday afternoon, May 15, at the Langley Events Centre as the Kamloops Blazers skated to a 6-0 shutout victory. (Gary Ahuja, Langley Events Centre/Special to Langley Advance Times)

During the 2019-20 season Cotton led all WHL defencemen in scoring with 20 goals and 67 points.

He was selected by the Detroit Red Wings in Round 5 of the 2020 NHL Draft.

He was acquired by the Vancouver Giants in an early November trade with the Lethbridge Hurricanes.

He finished the playoffs with six goals and 10 assists for 16 points in 12 games.