The G-Men punched their ticket to the Western Hockey League post-season for a second consecutive year following a 4-1 win over the Prince George Cougars on Sunday afternoon at Langley Events Centre.

Vancouver improved to 37-13-2-1 and with 77 points, the team has a 20-point lead atop the B.C. Division and they also find themselves just one point back of the Everett Silvertips for top spot and home-ice advantage throughout the Western Conference playoffs. Both teams have 15 games remaining, but none head-to-head.

“We had a little bit of a taste of (the playoffs) last year and knew going into training camp this was the ultimate goal,” said captain Jared Dmytriw, who opened the scoring for Vancouver in the second period with his 12th of the season.

“We just want to be playing the right way going into playoffs.”

The Giants were trailing 1-0 after 20 minutes as Prince George’s Ethan Browne took advantage of a fortuitous bounce off the end boards during a first-period power play.

This marked the 13th time Vancouver has found itself tied following 40 minutes and they improved to 10-2-1-0 in that situation thanks to three third-period goals.

“It seems like we put ourselves in that situation a lot this year. We have a lot of confidence as a group to not get down and always be positive. Whether we are winning, tied or down going into the third, we know that if we stick to our game plan it is eventually going to work out for us,” Dmytriw said.

“That was the same thing we did tonight, eventually the bounces start going our way and the puck goes into the net.”

Davis Koch scored the winner just past the seven-minute mark, placing a perfect shot over Taylor Gauthier’s shoulder and off the bar and in during a Giants power play. Justin Sourdif added an insurance marker four minutes later converting his own rebound – his fifth goal in the last five games – and Tristan Nielsen rounded out the scoring with the team’s playing four-on-four, stealing the puck at the Prince George blue-line and scoring his 10th of the season.

The teams were playing four-on-four during Nielsen’s goal after Bowen Byram was assessed a five-minute major for checking to the team and Prince George took a minor penalty on the play. All non-fighting major penalties are automatically reviewed by the league, but coach Michael Dyck felt Byram’s hit was clean and to the shoulder of the Cougars player.

This was the final of nine head-to-head meetings between Vancouver and Prince George with the Giants going 8-1-0-0.

The team just finished a stretch of seven games in a dozen days, with extensive travel involved: Kamloops, Portland, Langley, Prince George, Kamloops, and then back to Langley.

The Giants are back in action on Friday when they host the Spokane Chiefs (7:30 p.m.).

They also play in Kelowna against the Rockets on Saturday night before hosting the Portland Winterhawks on a special Monday Family Day game at 3 p.m. 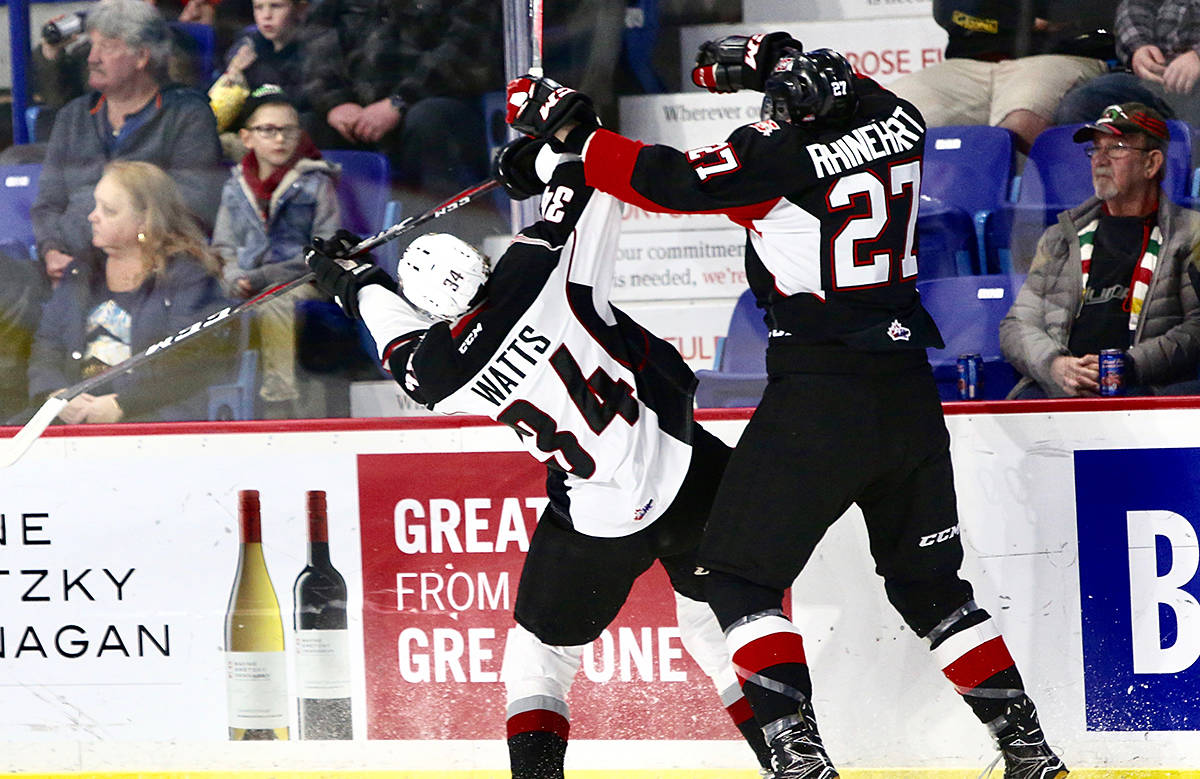