Kvasnica scored twice for the Giants while Eric Florchuk chimed in with two assists.

Goaltender David Tendeck was sharp in the Giants net, stopping 24 of the 25 pucks fired his way.

An effective Giants power play struck twice for the second game in a row for the Langley-based team who moved within four points of Kelowna for a top three spot in the B.C. Division.

Sunday’s victory in Kelowna marked the 200th career WHL victory as a head coach for Dyck.

He recorded 65 of those 200 victories over the past two seasons with the Giants. The first 135 came with the Lethbridge Hurricanes.

Just 2:31 into the game, Michal Kvasnica parked himself inside the right-wing circle and one-timed an Eric Florchuk cross-ice feed past a lunging Roman Basran to move the Giants aead 1-0.

For Kvasnica it was his first goal since Dec. 8th.

After a scoreless second period, Kvasnica struck again for Vancouver at the 9:17 mark of the third.

Kvasnica’s shot from the high slot found its way through traffic and past Basran for his second goal of the night. The lone assist on the goal once again came from Eric Florchuk.

He knocked home a Justin Sourdif rebound from in close for his second goal of the season. Cole Shepard added the second assist.

Just 35 seconds later, Kelowna bagged their lone goal of the game. It came from Alex Swetlikoff in close on a forehand deke that snuck through David Tendeck’s legs for his 10th of the season.

Kvasnica and Tendeck were named forst and second stars of the game, respctively, while Rockets Matthew Wedman was third.

The two-goal performance from Michal Kvasnica marked his first career multi-goal game in the WHL.

Both of Holden Katzalay’s goals this season have come against the Kelowna Rockets on the road.

David Tendeck improved his record to 3-0-0-1 on the season against Kelowna.

Up next, Giants are on home ice at the Langley Events Centre to play Kamloops Blazers Friday night, Jan. 31. Puck drop is 7:30 p.m. 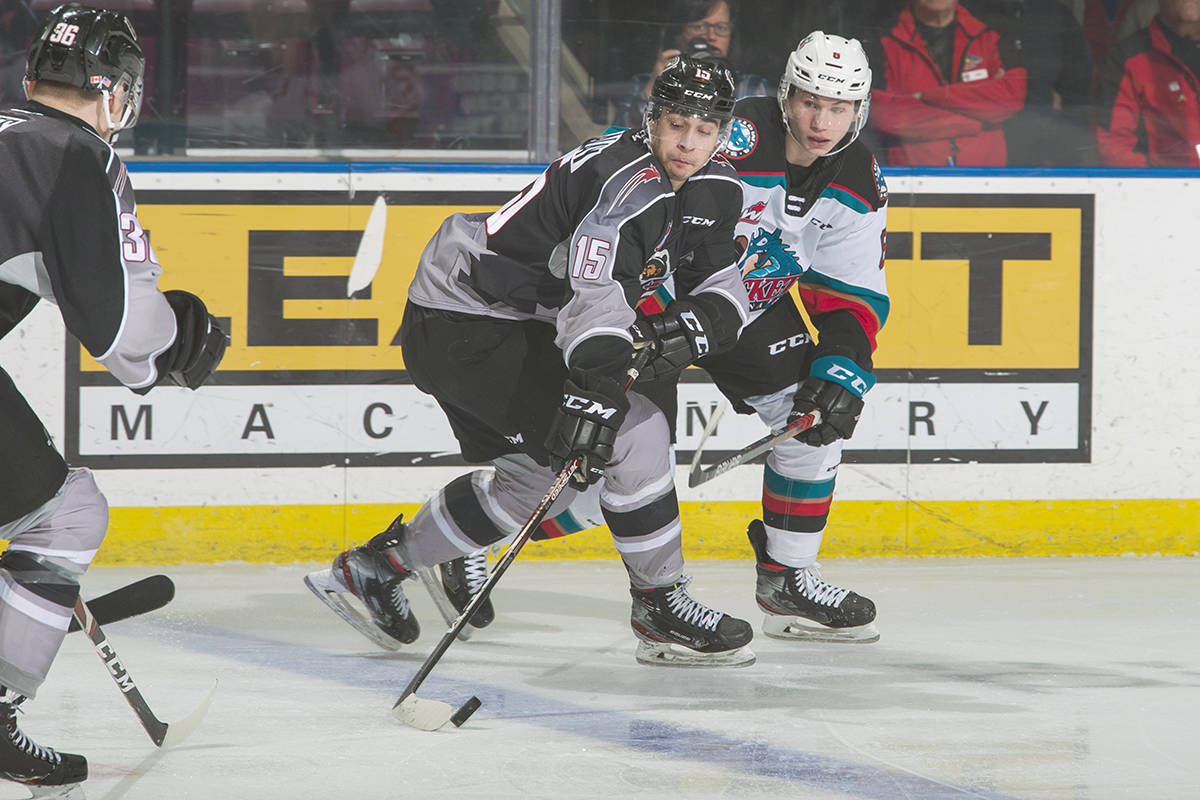 Kaedan Korczak of the Kelowna Rockets checked Holden Katzalay of the Vancouver Giants as he moved the puck up the ice at Prospera Place on Sunday, Jan. 26, in Kelowna. (Marissa Baecker/Special to Langley Advance Times) 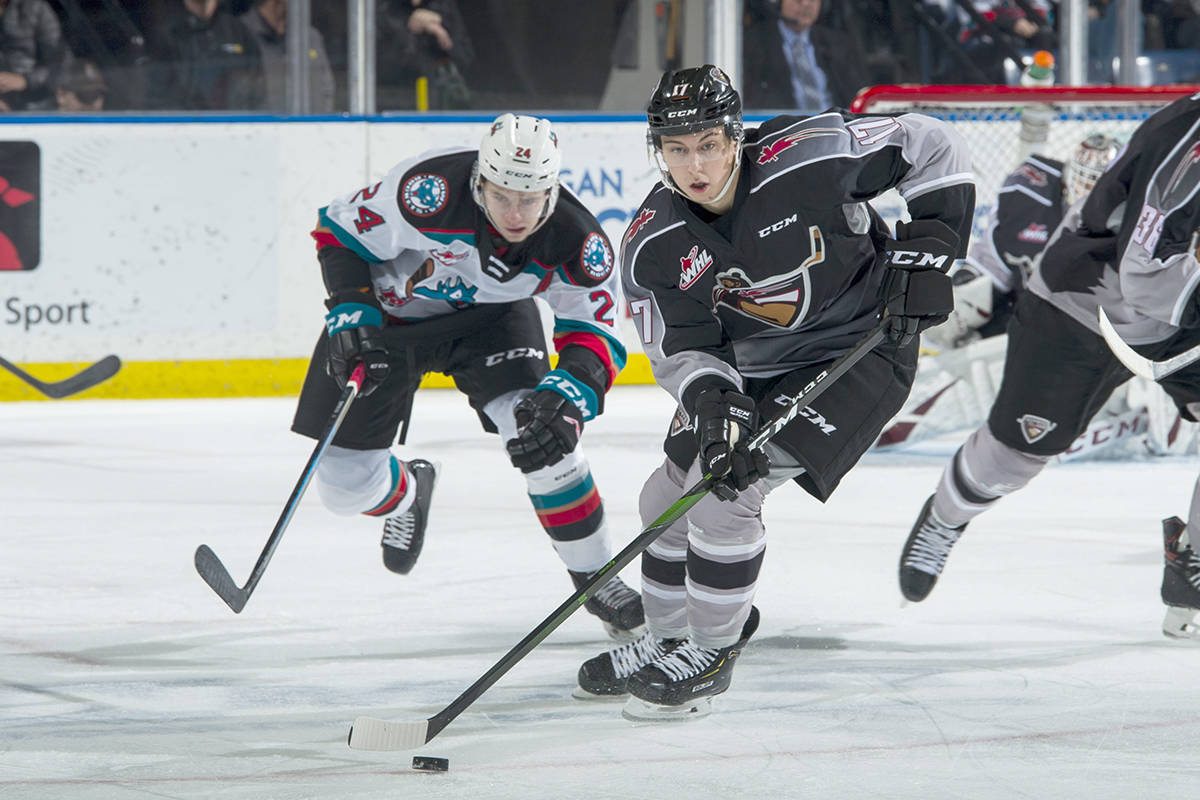 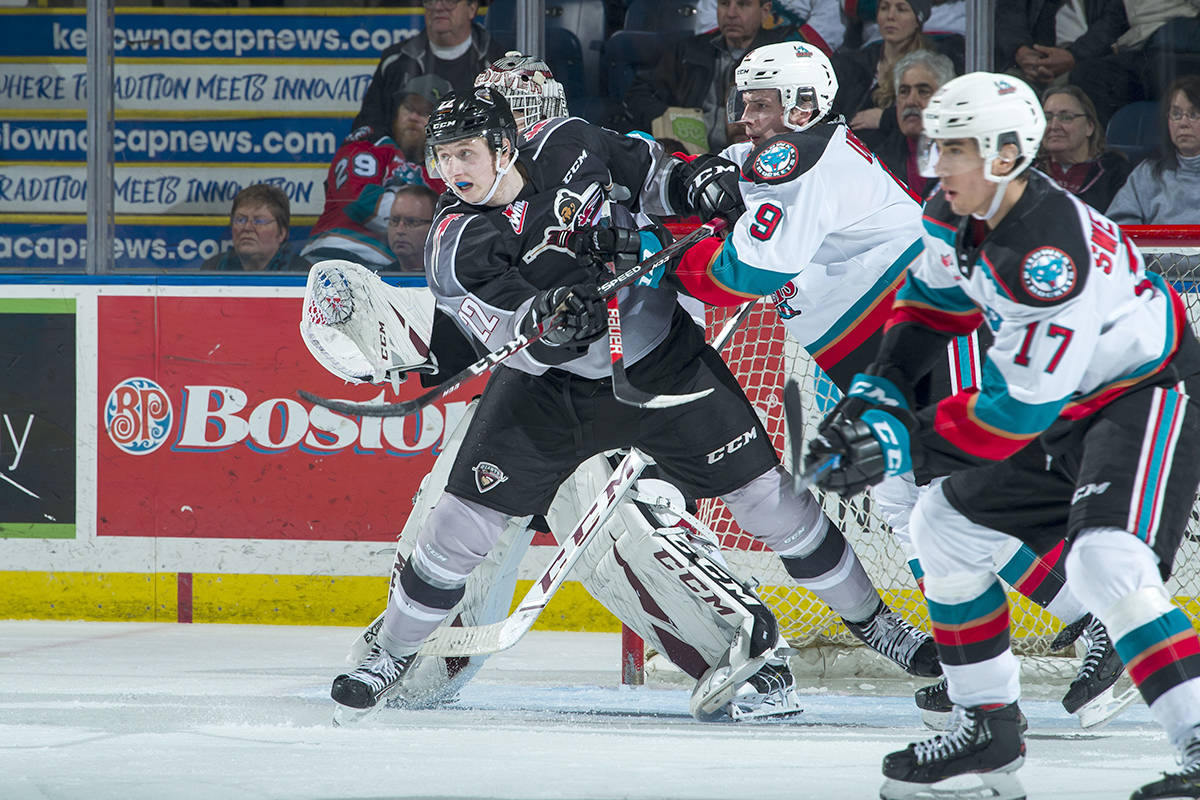 Connor Horning of the Vancouver Giants tangled with Mark Liwiski of the Kelowna Rockets during second period action at Prospera Place on Jan. 26 in Kelowna. (Marissa Baecker/Special to Langley Advance Times)