Four times this season – twice in the past week alone – Royals had stymied the Giants on their home ice. But on Friday night, Feb. 25, finally solved the Victoria squad with a 4-0 victory in Western Hockey League action.

The season series now sits at eight wins for Victoria – they have just 14 total on the season — compared to just three for the Giants.

“It is a lot more fun to hunt than be hunted, I can tell you that.”

The teams were scoreless after 20 minutes, but Victoria had a chance to go ahead with a two-man advantage for 37 seconds early in the second period.

However, as the first penalty expired, and Colton Langkow stepped out of the penalty box, he was able to race to a loose puck and set up Zack Ostapchuk for the short-handed goal.

Less than seven minutes later – this time on a Vancouver power play – Fabian Lysell’s shot snuck through Campbell Arnold and sat on the goal-line with Ostapchuk tapping home the loose puck into the empty net. 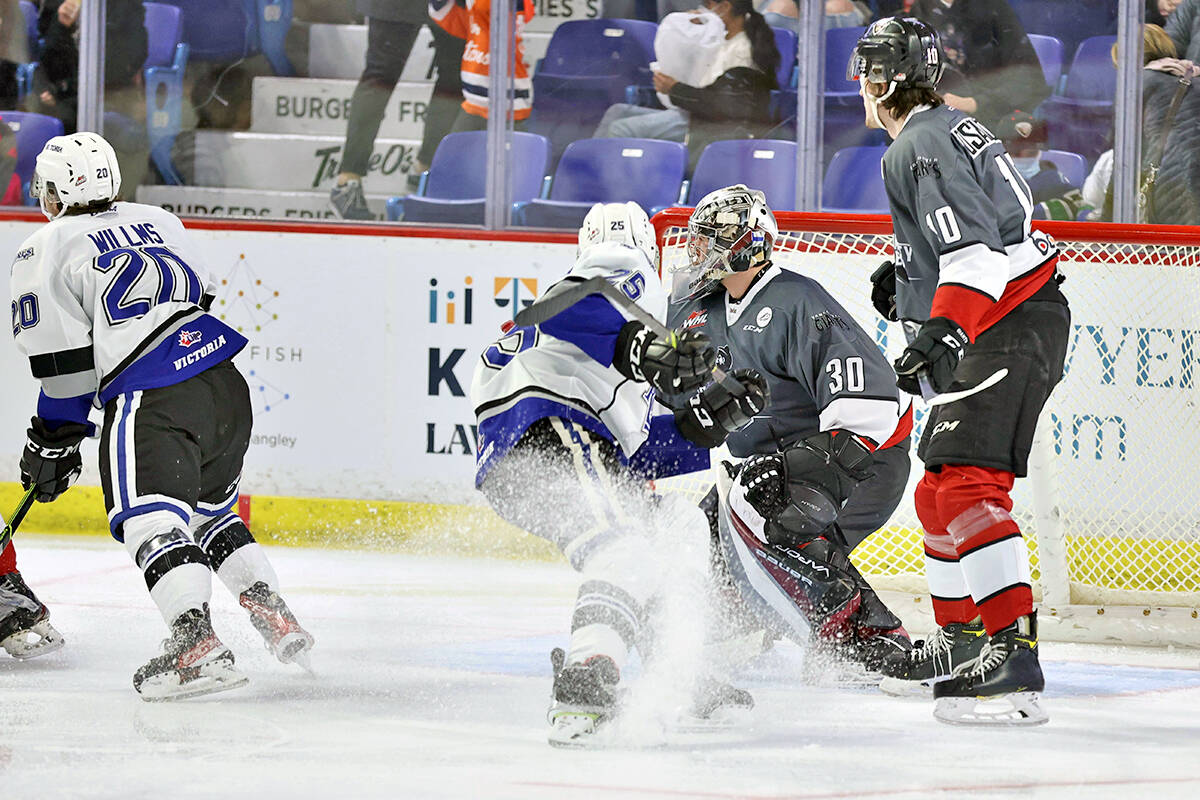 G-Men kicked off their weekend with a 4-0 shutout victory on Friday, Feb. 25 at Langley Events Centre over the Victoria Royals on the strength of two goals from Zack Ostapchuk and Jesper Vikman. (Rob Wilton, Vancouver Giants/Special to Langley Advance Times)

Cole Shepard made it 3-0 with a goal 89 seconds into the third period when he picked the short-side top corner from just above the goal-line before Lysell deked two defenders and wired home his team-leading 18th of the season.

“That is what we are going to require in order to have success, is having everybody do their job and I thought everybody contributed tonight in their own way,” Dyck said.

That sentiment was echoed by Ostapchuk, the game’s first star.

“I really liked our game; we said we wanted to be physical, we wanted to turn over pucks and I thought we did that really well and everybody had a hand in this win,” he said.

RECAP: The G-Men kicked off their weekend with a 4-0 shutout victory over the Victoria Royals on the strength of two goals from Zack Ostapchuk and Jesper Vikman's third shutout of the season. Rematch tomorrow in Victoria.

This was the third time this season Vancouver held an opponent to less than 20 shots on goal (16 and 19 were the other two amounts) and all three times Victoria has been the opponent. That also happens to be the three times the Giants have beaten Victoria out of their 11 games.

Up next for the Giants is their final head-to-head meeting with the Royals, this time in Victoria on Saturday.

The team’s next home game is March 4 at 7:30 p.m. when they host the Kamloops Blazers at Langley Events Centre.