Sunday afternoon (March 6) at the Langley Events Centre in front of 2,814 fans, Vancouver Giants dropped a 5-4 regulation decision to the visiting Kelowna Rockets.

Mark Liwiski scored twice, including the game-winner with 3:39 left in the third period to lift the Rockets to their second victory in as many nights over the Giants.

Andrew Cristall added a goal and two assists for Kelowna.

Ethan Semeniuk, Tom Cadieux, Connor Horning and Jaden Lipinski responded with goals for the Giants who managed one point of an available six during their weekend three-in-three.

A 🚀 from Connor Horning gets us level! pic.twitter.com/IhNsbPe9Fs

At 1:32 into the game, Gabriel Szturc opened the scoring for the Rockets in close on a backhand deke and 32 seconds later, Turner McMillen converted off the rush.

Five minutes later, Giants rookie Ethan Semeniuk skated in alone, and tucked home a backhand deke for his sixth goal of the season.

At 14:40, Connor Horning’s point shot found its way through traffic and home to even the score at 2-2. Horning’s ninth came via the power play and was set up by Payton Mount and Ty Thorpe. 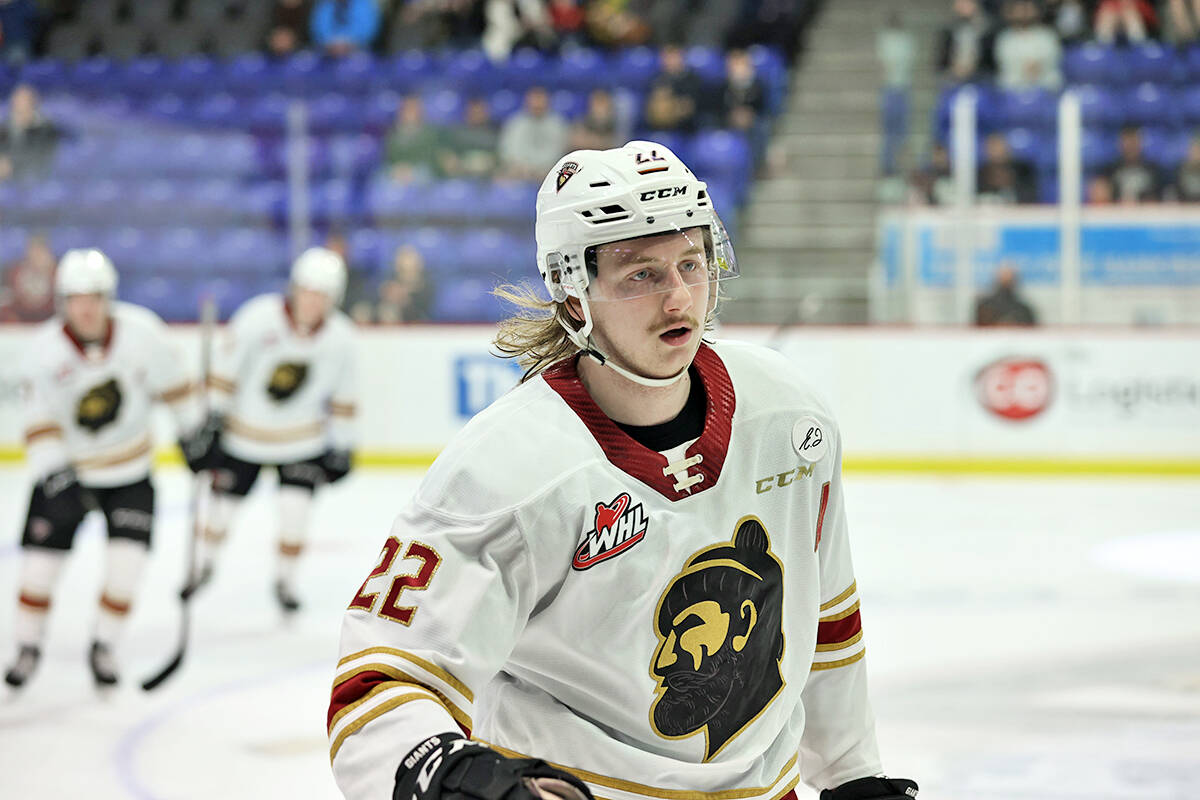 Connor Horning’s point shot found its way through traffic to even the score for the Vancouver Giants at 2-2 during Sunday’s (March 6) game against Kelowna Rockets at the Langley Events Centre. (Rob Wilton/Special to Langley Advance Times)

The power play was not done. At 18:17 Tom Cadieux put the Giants ahead by a goal when his shot from the point hit the back bar of the net, and bounced quickly out. The referee originally signalled no goal – but after a video review, the goal would stand, and the Giants had a 3-2 lead.

At 6:44 of the second period, Andrew Cristall (19) notched his third point of the night on a shot from the slot that snuck past Will Gurski.

At 16:02, Mark Liwiski was awarded a penalty shot which would result in the go-ahead goal for Kelowna. Liwiski skated wide down the left, cut back to the middle, and finished a backhander over Will Gurski’s left pad to give Kelowna a shorthanded penalty shot goal and a 4-3 lead.

In the third period, Rookie Jaden Lipinski evened the score at 4-4 with an individual effort that started along the left wing, before he cut to the front of the net, and stuffed his third goal of the season home.

Lipinski does it all alone to even the score at 4! pic.twitter.com/geSCsilNFn

Lipinski has scored in each of his previous two games for the Giants. Sunday’s goal marked his first home goal of his WHL career.

The game’s final goal came at 16:21 off the stick of Mark Liwiski to give the Rockets their third and final lead of the night.

Despite the loss, the Giants remain two points ahead of the Prince George Cougars for sixth place in the Western Conference playoff standings.

Next Giants game is set for Wednesday evening, March 9, in Spokane, at 7:05 p.m.