An up-and-coming Giants defenceman from Maple Ridge is one of only 30 picked to attend an exclusive Hockey Canada camp this summer and potentially represent his company on the world stage this fall.

Colton Roberts, a 16-year-old who started with the Langley-based Vancouver Giants last year, has been selected to participate in the national organization’s prestigious summer development camp in Calgary in mid-July.

For the duration of the week-long camp, the players – which include only 30 defencemen, 10 goaltenders, and 60 forwards – are split into five teams for on- and off-ice training, fitness testing, practices, intrasquad games, and classroom sessions.

Originally selected by the Giants with the 11th overall selection in the 2021 WHL prospects draft, the 6 ft. 4 in. right-shot blueliner is the reigning Canadian Sport School Hockey League defenceman of the year, and great play was expected, said Giants general manager Barclay Parneta, explaining some of the young player’s background.

In 31 games with the Delta Hockey Academy’s U17 Prep program, Roberts managed nine goals and 36 assists for 45 points, to go with 48 penalty minutes. He signed with the Giants in December, 2021 and appeared in six total games for the Giants (Five in the regular season, and one in the playoffs). He notched his first career WHL point in Prince George on Feb. 11.

“When we drafted Colton in December we knew we were adding a player with great leadership on and off the ice,” Parneta said.

“Colton is highly deserving of this opportunity. We’re excited for him, and we know that he’ll thrive during his first experience with Hockey Canada and will represent the Giants and his family with the utmost leadership and class,” added the GM.

“The national under-17 development camp is the first stage in introducing these athletes to the Program of Excellence, and it is a great opportunity for them to develop as players and learn what it takes to wear the Maple Leaf,” Millar explained.

“We look forward to enhancing these young players’ ongoing development during this camp and starting the process of building our three national U17 teams for the World Under-17 Hockey Challenge this fall.”

Following the camp, players will continue to be evaluated through the early portion of the 2022-23 season, before 66 are named to one of three Canadian national teams – Team Canada Black, Team Canada Red and Team Canada White – that will compete at the 2022 World Under-17 Hockey Challenge, scheduled for Nov. 5 to 12 in Langley and Delta.

Colton isn’t the first Giant to be given this unique training and playing opportunity.

In recent years, a few other young G-Men were invited to represent Canada at the U-17 level, including Mazden Leslie and Ty Halaburda in 2021, Justin Sourdif in 2018, and Bowen Byram in 2017. 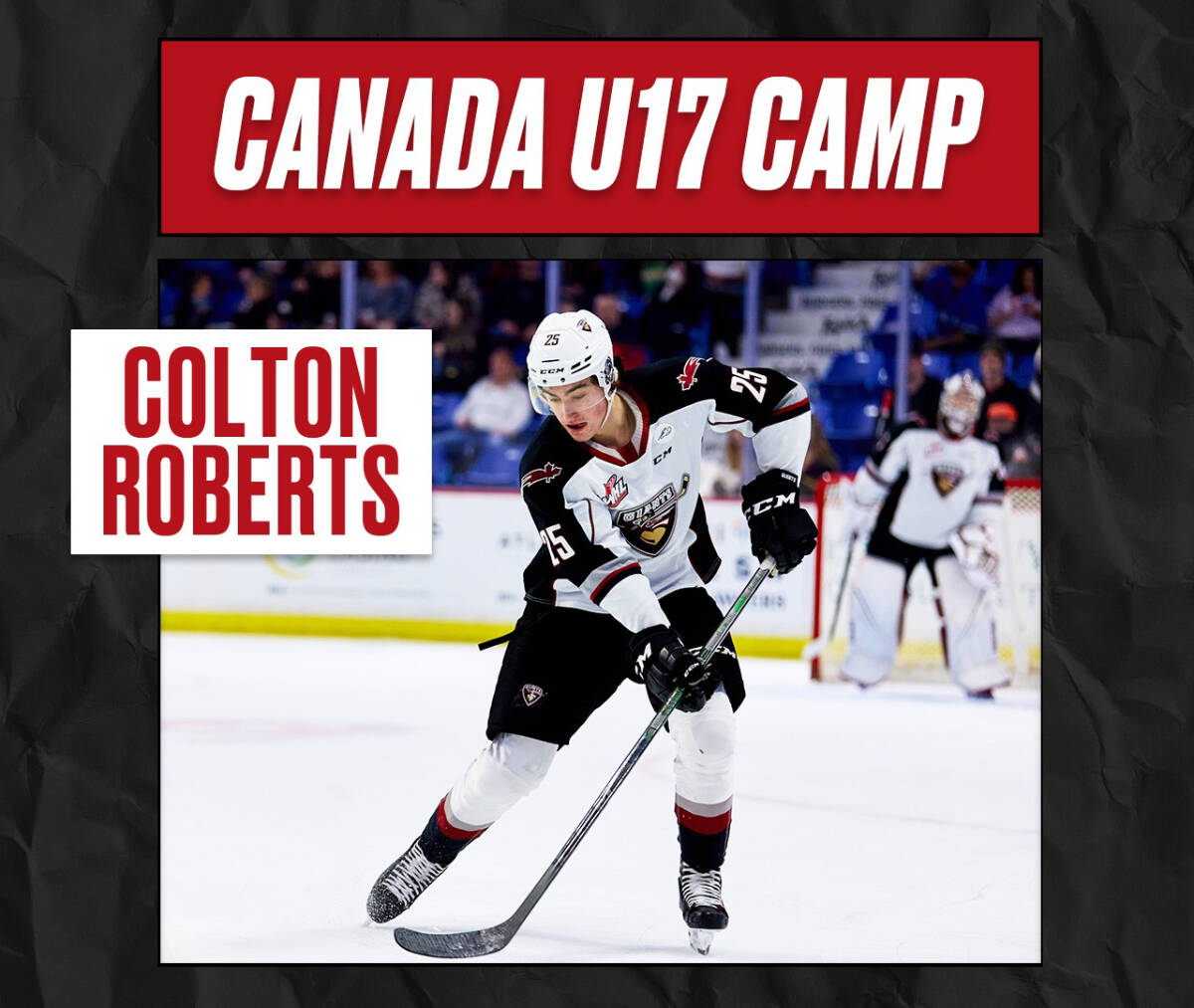 Giants defenceman Colton Roberts of Maple Ridge has been invited to the Hockey Canada U17 camp in Calgary in July. (Jamison Derksen graphic/Special to Black Press Media)