Gurdeep Pandher, a Yukon-based bhangra dancer, shows his skill with sweeping arm movements and high kicks on the steps of the BC Legislature Building on Saturday, Aug. 8, 2020. (Devon Bidal/News Staff) 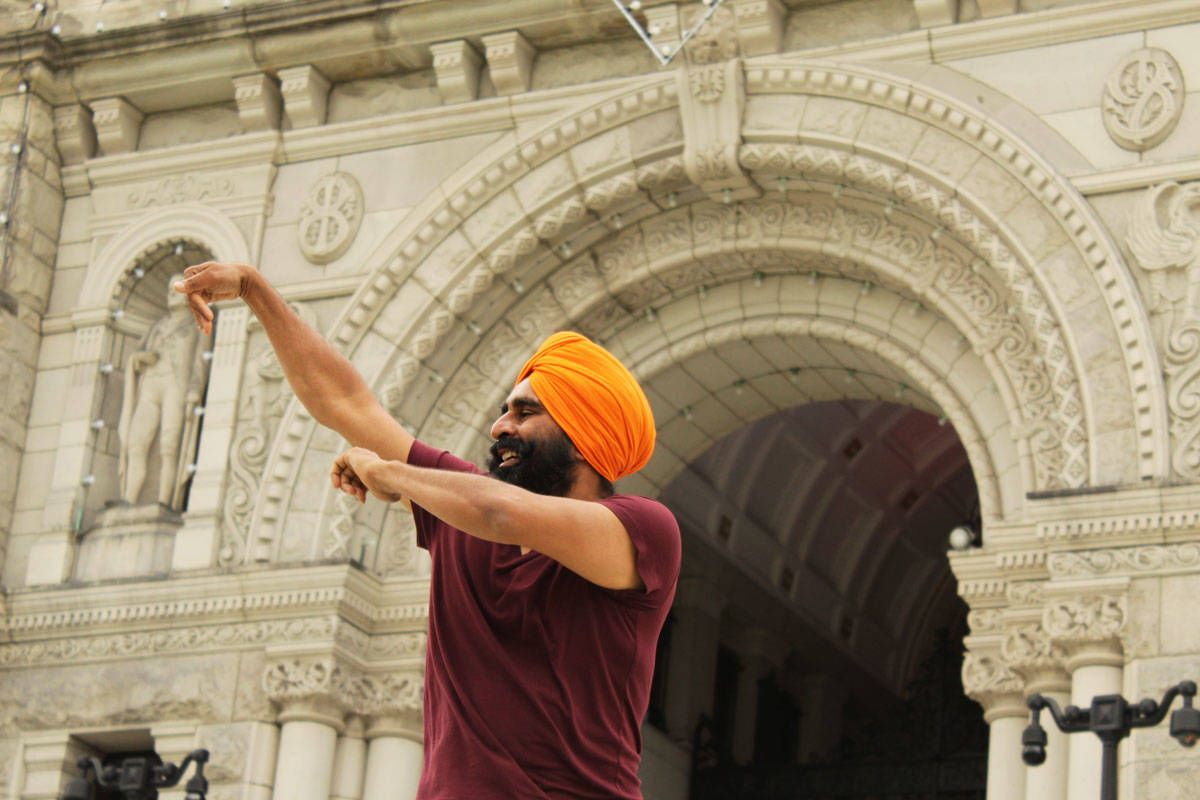 Gurdeep Pandher, a Yukon-based bhangra dancer, shows his skill with sweeping arm movements and high kicks on the steps of the BC Legislature Building on Saturday, Aug. 8, 2020. (Devon Bidal/News Staff)

Gurdeep Pandher is always ready for an adventure, making friends and dancing a bhangra number or two – especially on the steps of the B.C. Legislature Building.

The Yukon-based dancer moved to Canada from Punjab more than a decade ago, but it wasn’t until recently that he became a household name with several of his bhangra dance videos going viral on social media.

Pandher’s journey to social media stardom started “organically” when he shared an online video of his Canada Day performance in Whitehorse. The video initially meant for friends and family was shared and watched by some 300,000 people overnight, said Pandher, who’s been doing bhangra since he was a child living in a village in Punjab.

On Aug. 7, Pandher announced on Twitter that he would be exploring Vancouver Island for 10 days and shared a video of him doing bhangra in front of the legislature building in downtown Victoria. After touring Greater Victoria, he planned to drive up to Tofino – making various stops along the way.

This wasn’t Pandher’s first time on Vancouver Island. In 2019, he filmed a bhangra dance video with the Canadian Armed Forces at the base in Esquimalt which caught the attention of Prime Minister Justin Trudeau. Since then, Pandher has danced with bagpiper Jordan Lincez, Canadian Paralympian Stephanie Dixon and Whitehorse Mayor Dan Curtis – each video raking in millions of views.

Hello from Victoria, BC!
I am at Vancouver Island for 10 days! pic.twitter.com/UzeiAwiyZ1

“Wherever I go, I end up making new connections. This type of work unites people. It doesn’t matter which background or which part of the world you’re coming from – you have the same feelings inside.”

Despite being a social media sensation, Pandher doesn’t feel like a celebrity. He values the simpler things and feels “real richness is being happy and positive.”

After touring Vancouver Island, Pandher will head home to his cabin outside Whitehorse, Yukon where he teaches bhangra workout classes. Since the COVID-19 pandemic began, he’s begun offering classes online. The first session had about 70 people from across Canada taking part and he was surprised by the response.

”People were so excited and cheerful,” said Pandher, who now teaches 24 online dance classes per month to some 2000 students across Canada and the U.S.A.

“It was so heartwarming.”

In Victoria (BC) downtown, this human was playing his guitar.

I asked him if he could match the tempo with my music.

He tried, and it matched.

Everything is just matching tempos away.

The class fee is by donation and 25 per cent of the proceeds go to charities focused on COVID-19 and mental health – which has played a big role in Pandher’s dance journey. His goal is to use bhangra to break down barriers and lift spirits. People of all ages are feeling alone right now and students have said that the dance classes are a way to relieve that pressure, express emotions and find community.

The connecting doesn’t stop when the class is over, Pandher said, adding that he’s received “powerful” messages – some of which brought him to tears– from people who’ve found joy through bhangra – from doctors working on COVID-19 floors to bedridden patients who grooved along to the music.

“I’ve started feeling that may be it’s my duty or responsibility to spread positivity, joy and hope – if we have hope, we have everything,” Pandher said.

Dancing helps him stay hopeful too.

“When I start dancing, I forget everything and instantly regain my joy.”