To Christina Bucholtz, the country of Sierra Leone is not so different from her hometown of Cloverdale.

“Sierra Leone reminds me a lot of B.C., in that they have the mountains and the ocean right beside each other which is so unique. A lot of times when I’m on the beach there I feel like I’m in B.C., minus the 30 degree temperature difference,” she continued, laughing.

Bucholtz now lives in Sierra Leone year-round, teaching at an international school in Freetown and volunteering her evenings and weekends at the People’s Foundation of Sierra Leone, a community-based organization she founded in 2009.

Her passion for Sierra Leone’s youth, and for education, began when she first visited the country as part of a program at Surrey Christian School during her senior year of high school.

With two other students and three teachers, she spent a month volunteering at a school in the town of Kabala.

The experience changed her life.

“I was really touched by how full the community was,” she said. “It shook all the assumptions that I had about life.”

It challenged her perception that she hadn’t had a lot growing up. “I think most of us living in this part of the world have quite a lot, but we don’t fully understand how blessed we are to have the things that we have,” she explained.

Volunteering as a student teacher also awakened a passion for education – one that she hadn’t had before. During the trip she decided to pursue a teaching degree and to one day work as a teacher in Sierra Leone.

She returned to Kabala during the summer a year later as a volunteer with a non-profit organization. There she made friends who wanted the chance to attend university, but weren’t able to because of the cost.

“It turned out it would only be $1,000 a year for them to go to school, and that includes their tuition, their books, their accommodation, everything,” she said.

Bucholtz was studying at Capiliano University at the time, and paying Canadian university fees, which are on average $6,500 a year in tuition alone.

“I knew I could make a difference,” said Bucholtz. She founded the People’s Foundation of Sierra Leone with the goal of providing scholarships to youth. In its first year, the foundation gave four students $1,000 scholarships.

Since then, the foundation has grown in scope and size. In 2017, it awarded 18 students scholarships, raising close to $40,000. And, as Bucholtz explains, “We now work with over 300 youth across the country, running youth empowerment programs. Youth meet together in different areas of the country and they discuss issues like sexual abuse, STDs, and disease prevention… we did a lot of work during the ebola outbreak about sensitizing communities on what ebola looks like, how to avoid it and things like that.”

The organization has seven branches in Sierra Leone, based in Freetown, Makeni, Bo, Waterloo, Kabala, Kenema and Port Loko. Besides the original branch in Kabala, where it has a donated office, each branch operates in the community under the leadership of a youth who has participated in the foundation in the past.

“Some of the youth from the [Kabala] branch, when they moved to a new city to go to school — there are no universities in Kabala — they would ask if they could start a new branch,” said Bucholtz.

Bucholtz would then go and assist the youth, and give them mentoring manuals that cover everything from waste management to HIV/AIDS to sexual abuse.

The youth then choose community projects and begin to work in the town and surrounding area.

“In that way, I think it’s really special,” said Bucholtz. “It’s their project. It’s not me going in and saying you need to do this, this, this. The youth form a group, decide what the needs are in their community and then find ways to meet those needs.”

The university scholarships helps Sierra Leone youth overcome the financial obstacle between them and a post-secondary education, but the foundation offers youth much more, said Bucholtz.

Another obstacle between youth and an education, she explained, was “the lack of people believing in you.”

“Growing up [in Cloverdale], I always had someone believing in me, whether it was my boss or my principal, my teachers at school, my parents and grandparent, someone always told me I could be anything I wanted to be — whether that be a teacher, lawyer, president or doctor. I think a lot of people [in the program] don’t have somebody supporting them like that.

“We try to be that support system. Even if we can’t sponsor every student, we can support them in some way,” she said.

The People’s Foundation is run entirely by volunteers; the only administration fees that it has is its charitable registration fees and stamps (so it can mail out tax receipts for donations).

“That way we can ensure that all of the money we raise goes towards the students who really need it,” said Bucholtz.

The Cloverdale Reporter caught up with Bucholtz as she was in town to visit family for the holidays this week. She is also organizing the People’s Foundation of Sierra Leone’s first-annual fundraising gala which will take place on Wednesday, Dec. 13, from 6 to 10 p.m. at the Burnaby Mountain Clubhouse. Her hope is that funds raised from the gala will help the foundation help even more youth go to university next year in Sierra Leone.

Port Coquitlam mayor Greg Moore, BC Lions coach Mark Washington and Yabome Gilpin-Jackson, International African Woman of the Year, will speak at the event, which will include a silent auction and a catered dinner. Tickets are $75. For more information on the event, visit www.eventbrite.ca. 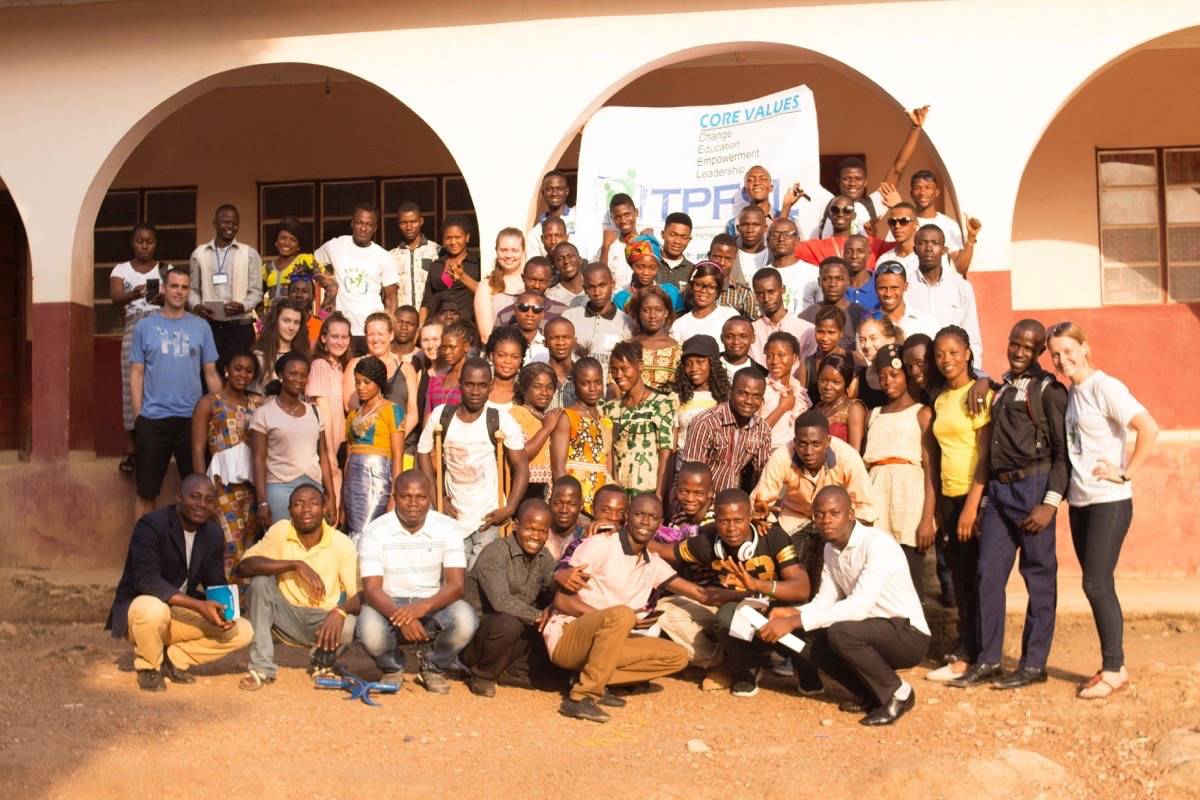 Taken at a 2016 Intercultural Youth Conference in Sierra Leone. Christina Bucholtz is on the far right. (Contributed)

Marley and Cratchit scaring up donations for Christmas charities