It’s been several months since a group of strangers redid Ken and Sandra Murphy’s Langley City home, and they want the people responsible to know what a difference their efforts have made.

They didn’t get to do in-person thanks because of the pandemic, but once COVID-19 restrictions are finally eased, Sandra is thinking about holding a “little barbecue” in their backyard of her home to say thank you.

In the meantime, Sandra wants everyone involved to know how grateful she and her husband are, and that she would have said more on the day it was unveiled in May, if she hadn’t been so overcome with emotion.

Sandra said it “felt like we were at an old-fashioned barn raising.”

Ken said they “did feel the love in that place and we still feel it.” 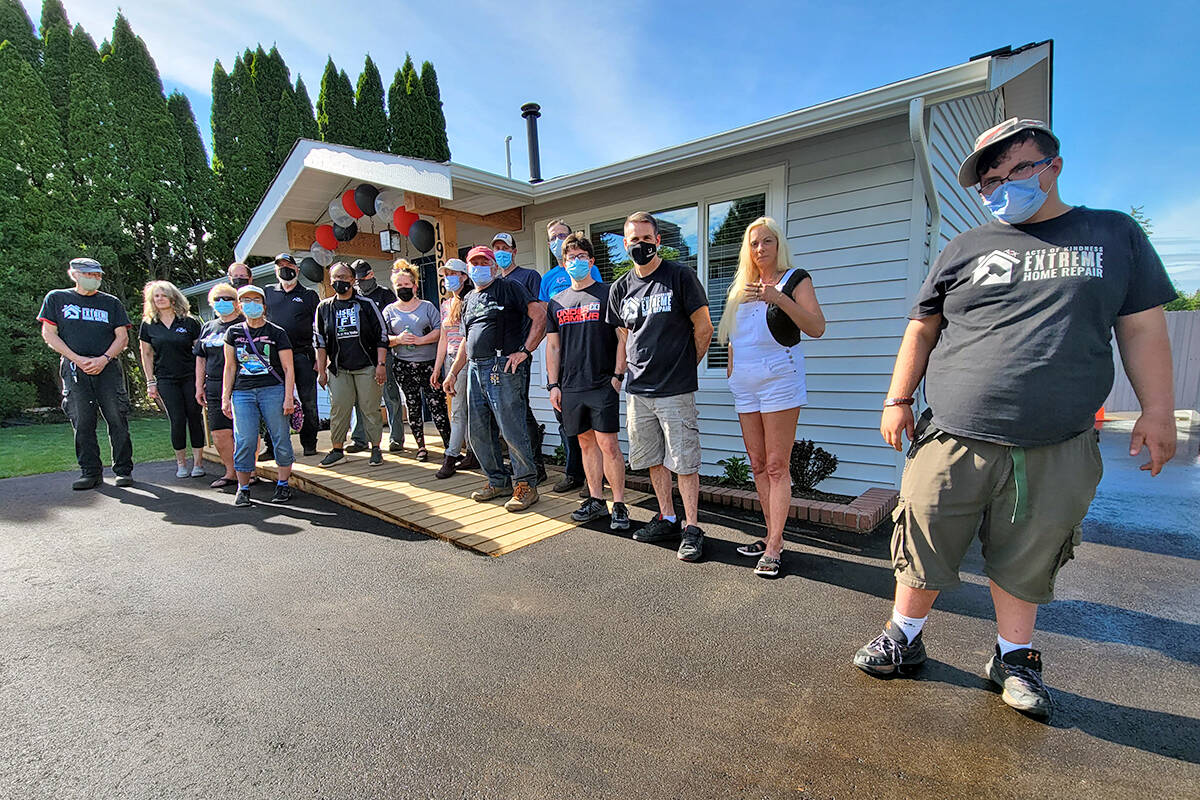 Crew members posed outside the home of Ken and Sandra Murphy in May before it was turned over by the Acts Of Kindness Extreme Home Renovation initiative. (Langley Advance Times/file)

The renos had actually been delayed a year because of the pandemic.

“I said, let’s put a halt to this, because people will get sick” Ken recalled.

“We can wait,” Sandra remembered saying.

When it was unveiled, the top-to-bottom overhaul by the Acts of Kindness (AOK) Extreme Home Repair initiative had transformed their house into a home that is wheelchair and scooter accessible.

The couple had lost their son in the summer of 2016, followed by a series of health issues for Sandra. She was in hospital with serious heart issues, and those health problems eventually led to the loss of her feet and several fingers.

Now, with a redesigned home that has wider hallways, an accessible roll-in shower and a kitchen layout that accommodates a wheelchair, among many other changes, Sandra remains amazed and delighted at the difference.

“I was outside on the outdoor patio, then I wheeled down to the vegetable garden – which is doing really well – and I thought, isn’t our house beautiful?” Sandra recalled.

“It’s not the great big struggle we had before,” Ken related.

Sandra is particularly pleased with the “perfectly laid out” kitchen that allows her to help out more when meals are being prepared.

“I’ll set my walker aside and take steps on my own.”

There were no COVID cases reported among the many people who worked on the house.

About 80 per cent of the structure was redone, by approximately 80 volunteers of various ages and backgrounds who worked at different times of the day to maintain social distancing over 26 days.

AOK is an Aldergrove-based charitable organization with 20 years of experience in connecting people to resources and opportunities, with their largest charitable initiative being a total-home-transformation project for families in need.