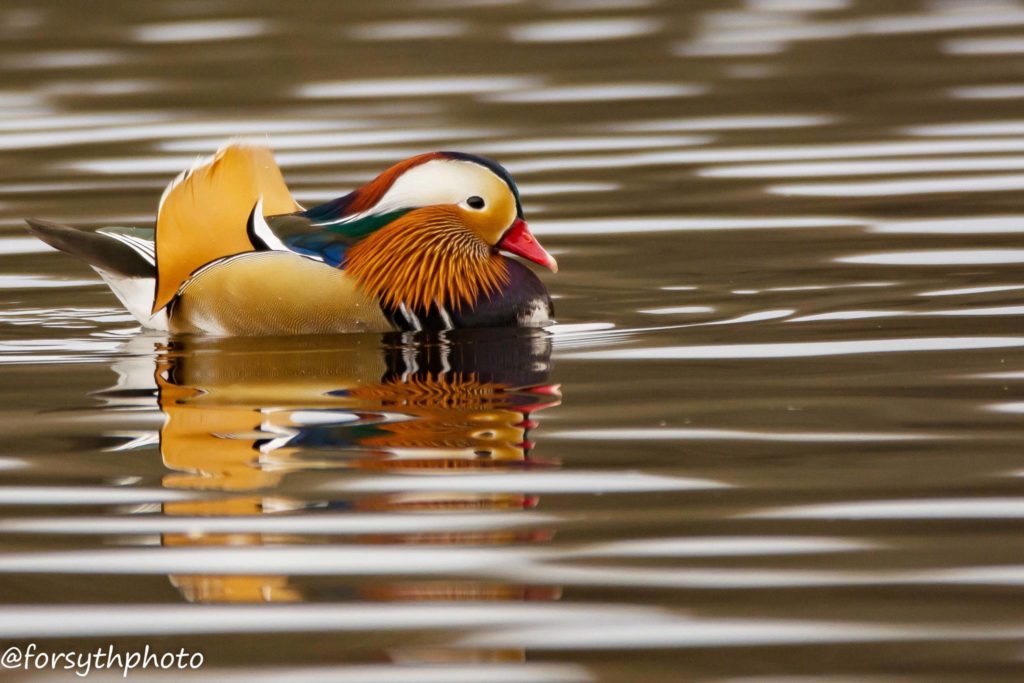 Jamie Forsyth of Kimberley is a self-confessed ‘bird nerd’.

When not working at local garage, Meadowbrook Motors, Forsyth is an avid photographer, and birds are his favourite subject.

Like any enthusiastic amateur ornithologist, the rarer the bird, the better. And, being a bird-nerd, Forsyth is willing to hit the road for a good shot. He did that last weekend, driving overnight all the way to Burnaby to get a photo.

One bird that has always fascinated Forsyth is the colourful Mandarin Duck.

“ I first saw a photo of a Mandarin Duck probably over 20 years ago,” he said. “Since then I have always wanted to see and photograph one. The bird is native to Asia mainly, so I kinda figured, unless I was willing to travel a long way, I would never really get the chance to see the duck.”

In October of 2018, he had learned a mandarin duck had been spotted in Central Park in New York City.

“This duck became very famous quickly. I may have become slightly obsessed following these stories and finding photos people had taken of the famous duck. Now he is on the same continent as I was, wow. I started looking up plane tickets to New York.”

But before he took that expensive step, Forsyth decided to Google ‘mandarin duck, BC’. And what did he find but a news story from Vancouver about a mandarin duck in Burnaby. It is likely, he says, that the bird was privately owned and ‘flew the coop’ so to speak.

“Of course I am losing my mind now,” he said. “A mandarin in Burnaby. I am going this weekend!”

Forsyth contacted a couple of people from the news story, who gave him information on the duck and where it could be found.

“Both of these awesome people were willing to meet me at the last location the duck was spotted,” he said. “I worked my shift on Friday last week and left Kimberley at 6 p.m., heading for Deer Lake in Burnaby. I drove all night and arrived at the lake well before sunrise. I sent a message to Glen, the man who first spotted the duck and one of my contacts for intel. Glen met me at the lake slightly before sunrise. We grabbed our gear and he took me to a spot along the lake where he had seen the duck two days before.”

Then the waiting began.

“We set up shop. No sign of our friend though. Hours and hours go by and still no sign of him. A friend of Glen’s who had joined us earlier had now left and was walking on the other side of the lake when he called and told Glen he spotted the duck.

“I quickly scanned with my telephoto lens and confirmed it was our guy. I grab my gear and start running to the other side of the lake to set up, and hopefully catch him while he passes in front. We get set up on the other side and wait for a few minutes until we see a few ducks fly from where the mandarin was. Oh no, it was him. Now he had flown back to the original spot we were set up. Grabbed my gear again and made my way to our first spot. We did not see him at this point, but he had notoriously been hiding out under very thick brush for long periods of time. We figured he was close by and made the call to stick to this spot.”

“It was about noon and many people had come and gone trying to see the duck. A few dedicated folks stuck around. Not until about 2pm did our friend decide to come out. He came out and gave us all about 8 minutes in the open until he retreated back under the brush. I was truly an amazing experience for me to see this bird and photograph it. Myself and some of the amazing people I met went for a late lunch and shared some of our photos from the great day. I got in my truck at 5 p.m. on Saturday and drove all night home to Kimberley.”

And despite the lack of sleep, it was all worth it for Forsyth.

“21 hours driving, 2 sleepless nights…. Got to get my bucket shot!”

Surrey man wins new Toyota, gifts it to his daughter

VIDEO: Theo the 800-pound pig will soon be living high on the hog