A chance encounter led to the recovery of a missing heritage marker in a rural B.C. second-hand shop this year.

Ken Wilson likes to look for tools and other odds and ends in a second-hand shop in Fruitvale. On a recent visit earlier this year, he spotted a unique and unmistakable item – an item that shouldn’t have been in the store.

The object was far from home and Wilson knew exactly where it was supposed to be.

He had discovered a bronze plaque that he recognized as the heritage marker for the Township of Langley’s historic Telegraph Trail.

Wilson, now a Castlegar resident, grew up in Langley in the 1960s. He lived with his family for seven years in what is known today as the historic Traveller’s Hotel, located at Five Corners in Murrayville and built circa 1885. Wilson was familiar with the marker, which had been placed on a cairn at Telegraph Trail and Glover Road in 1958 to commemorate the Telegraph Trail’s historic significance.

“I remember riding our bikes to go fishing in the Salmon River, going through Milner, down Glover Road and I’d go past there and we’d see the plaque,” he said. “It was part of my youth. We saw the plaque [in the store] and I thought, ‘That’s got to be the same one.’ What are the chances?”

Deciding that the plaque needed to be returned home – and not believing the story that it had been recovered from someone’s storage locker – Wilson bought the distinctive piece.

After affirming it was indeed the missing marker, Wilson’s neighbour, Joe Bell, got in on the plaque rescue mission by obtaining building and packing material and constructing a custom-made crate in which to ship the plaque back to the Township.

“He did an excellent job,” Wilson said of Bell’s handiwork. “It worked out perfectly.”

“They treated it like gold bar,” Horricks said. “We were both delighted by its discovery and grateful for their generosity and care in returning it to us safely.”

The plaque had been pried off its rock base and stolen, and its loss would have been felt not just in terms of dollar value, but in historic significance.

“There is only one historic photo of it, so it would have been very hard to duplicate,” said Horricks, noting that the marker has now been reinstalled on its cairn.

The Telegraph Trail marks the line of the first telegraph system constructed in the Canadian west by the Collins Overland Telegraph line in 1865, and is considered a valuable early transportation link in Langley. A portion of the Telegraph Trail located between 72 and 80 Avenues and 240 and 248 Streets in northeast Langley was also the first historic resource in the Township to be given official designation status by Township Council in 1974.

“The age of it – its history. It’s pretty cool,” Wilson said. “I was quite happy to return the plaque and glad to have been of service. All’s well that ends well.”

To thank Wilson and Bell for ensuring the plaque’s safe return to its rightful place, Township Mayor Jack Froese sent them both a letter of appreciation and a copy of Our Shared History.

Prepared in 2017, Our Shared History is a historic context statement and thematic framework that looks at the themes and events that helped shape Langley over time. An abridged version that provides maps, photos and information on historic places that reflect these identified themes is featured on tol.ca/langleyshistoricplaces, an interactive new web app on the Township’s Community Heritage Register. 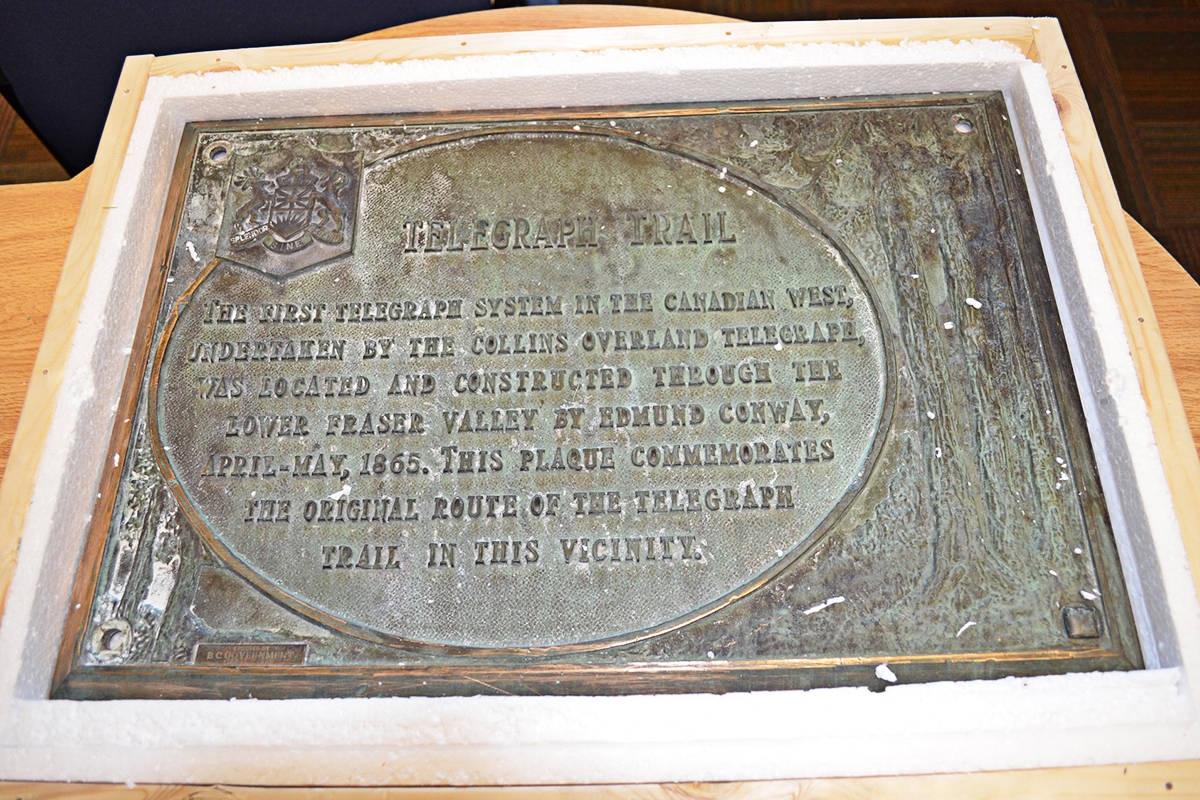 The missing and now-returned marker.