Help with the heavy lifting.

That was the closing message from Katie Pearson, executive director of the Lower Fraser Valley Aboriginal Society (LFVAS).

She encouraged people gathered at the community event Friday evening at the Derek Doubleday Arboretum for the National Day for Truth and Reconciliation to be active in reconciliation efforts.

The burden should not fall solely to Indigenous people, she said.

“I want you all to be on that journey and be our allies and take it on,” she said.

Indigenous people are called upon to help with school presentations, efforts by companies and staff, community initiatives and more. Pearson said she’s hoping people who have not experienced such things in their past to understand that events such as Sept. 30 brings up emotions, inter-generational traumas and more.

“It’s time for more people to step up and really work towards reconciliation,” Pearson said. “It’s not our job to do that every day. It’s a lot to carry, especially in the last year and a half since the revelation of the 215 children buried at Kamloops Residential School.”

United Church pastor Sophia Ducey was another of the speakers at Friday evening’s gathering of several hundred people.

“It’s the work of us, as the settlers, to do that work and to support whatever needs to happen and the timing of when it needs to happen to be in relationship with you,” Ducey replies.

She said she knew nothing of the history of residential schools until she became a minister.

“It’s my everyday walk and hope that I can be a part of the reparation of the harm that was caused over seven generations,” she said.

Murrayville’s Lisa Noll, a teacher, brought her daughter, Charlize to the event to remember the children forced to go to residential schools.

“Charlize has been learning about it at school, and we’ve been reading the book about the orange shirt story and Phyllis (Webstad), and how she lost her orange shirt when she got sent to the school,” Lisa said.

“And they cut her hair,” Charlize said.

The little girl understands that she’s about the same age as many of the Indigenous kids who taken from their families. So how would she react if she was forced to go to a distant school and be separated from her loved ones?

“I would bust out of there,” the six year old said.

The arboretum has more than 200 wooden crosses erected after the information came out about the Kamloops Residential School ground penetrating radar detecting the remains of children. The crosses were put up to honour the children who never returned home.

In Canada, more than 150,000 children were taken from their families and sent to residential schools where they were forbidden to speak their own languages, and were often abused and mistreated. According to Scientific American, the technology has provided evidence of more than 1,300 remains at various school sites across Canada. More sites will be assessed using modern technology and governments are working with Indigenous communities to determine the next steps.

Pearson said the LFVAS website will have helpful links to resources people can use to learn about reconciliation. Copies of the 94 calls to action released in 2015 by the Truth and Reconciliation Commission, few of which have been implemented, were available at the community event.

At Friday’s event, people could also take a copy of a letter from a book about the life of the late Cecil Paul, father of former local school board trustee Cecelia Reekie, who was one of the event organizers.

Paul, when the Duke of Cambridge visited Bella Bella in 2016, called on the royal to help repair the wrongs of the past. Author Jessie Housty, who wrote his biography, wrote his plea in a letter to the Duke. She cited the Queen’s 1995 apology to the Maori people which included an Act of Parliament acknowledging the injustices of British colonialism. Paul had hoped the same could be done for the Indigenous people in Canada.

“Please consider the importance of your family’s role in resetting the relationship with the Indigenous peoples of Canada,” Housty wrote. “It would ease our beloved elder’s heart to hear such as apology in his lifetime and it that is not to be, I have promised to keep his request alive until the time is right for it to be acknowledged and fulfilled.” 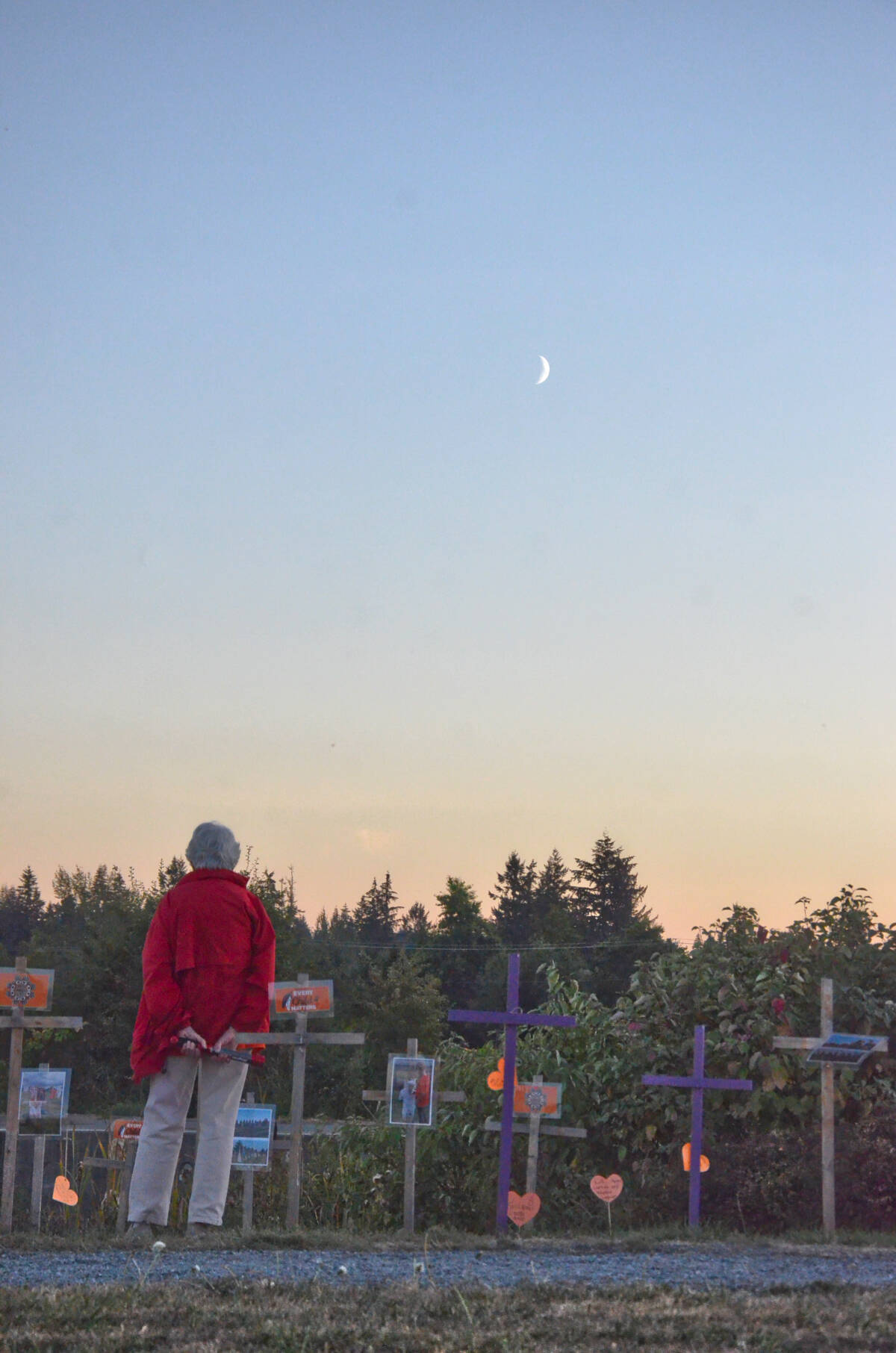 People started assembling at dusk to mark the National Day for Truth and Reconciliation at the Derek Doubleday Arboretum on Friday, Sept. 30, 2022. (Heather Colpitts/Langley Advance Times) 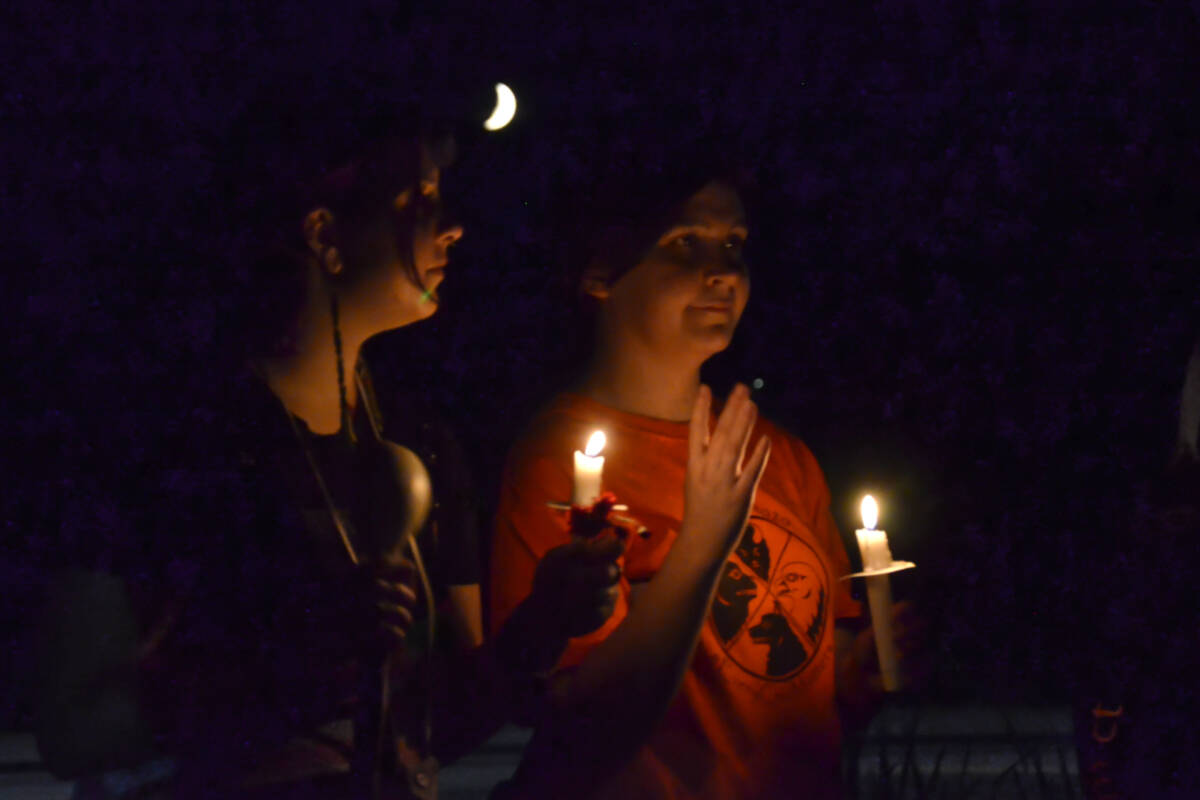 Under a crescent moon, people gathered Sept. 30, 2022, on the National Day for Truth and Reconciliation. Musicians Mika Cortan and Ellz Hazelton were part of a group of drummers and singers taking part. (Heather Colpitts/Langley Advance Times) 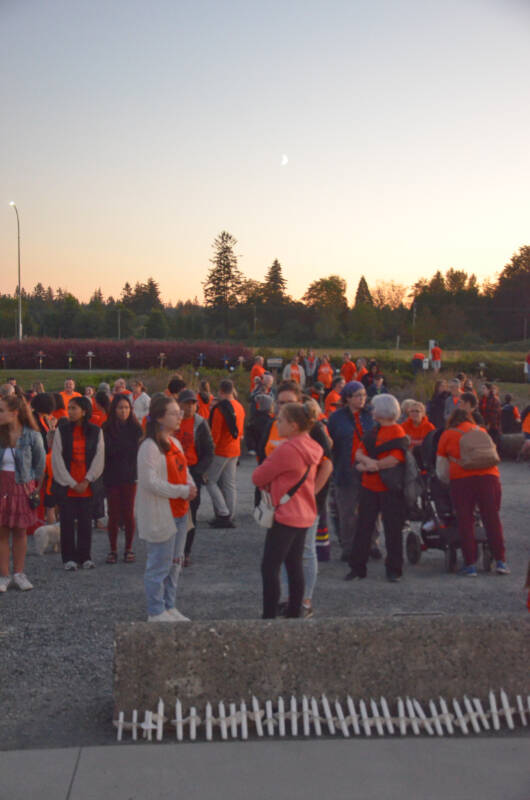 The public gathered at the Derek Doubleday Arboretum on Sept. 30, 2022, to mark the National Day for Truth and Reconciliation. (Heather Colpitts/Langley Advance Times) 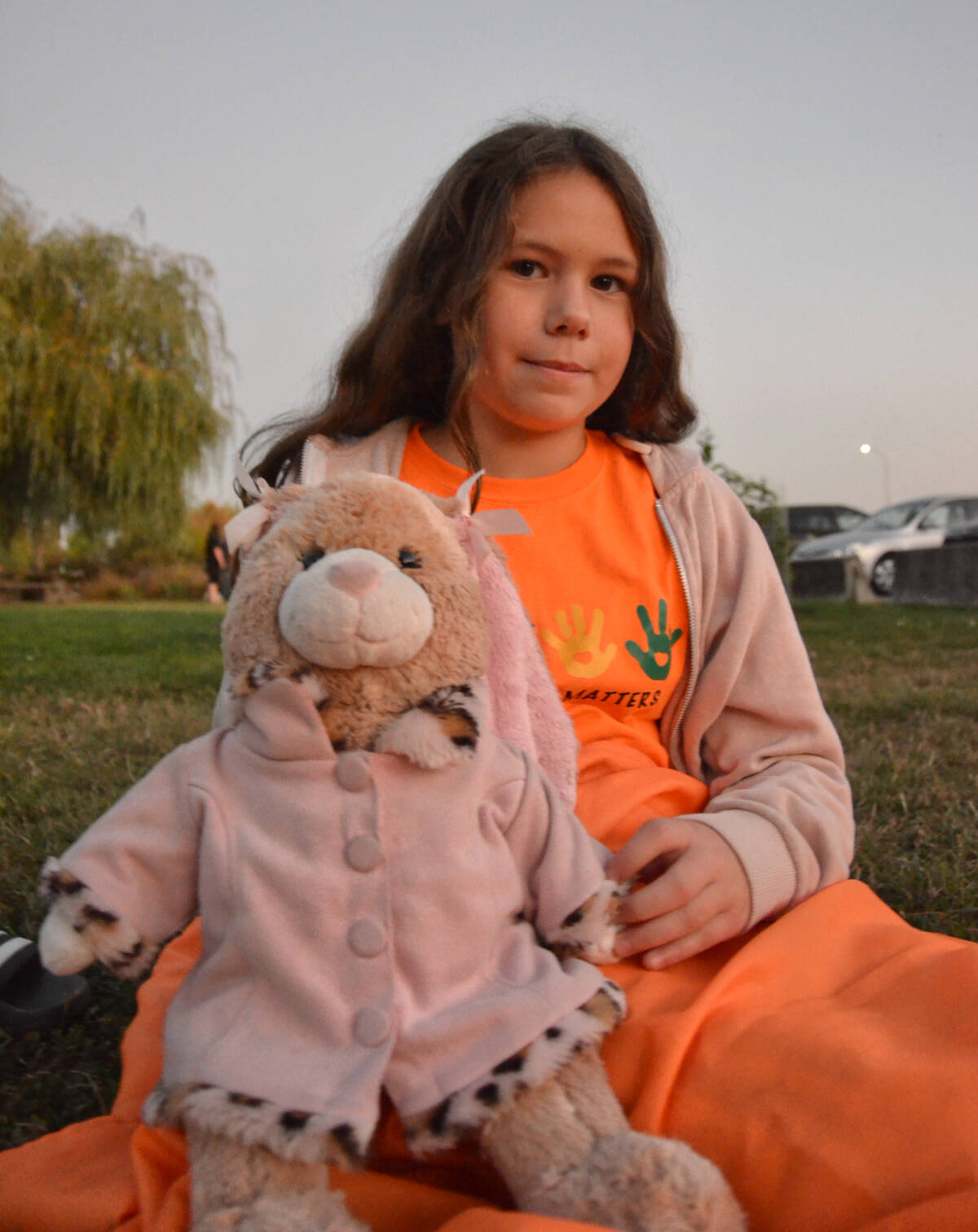 Jazlynn Reseigh had a cuddly friend along as her family spent the evening at the Derek Doubleday Arboretum on Friday, Sept. 30, 2022. They and many others attended the local event for National Day for Truth and Reconciliation. (Heather Colpitts/Langley Advance Times) 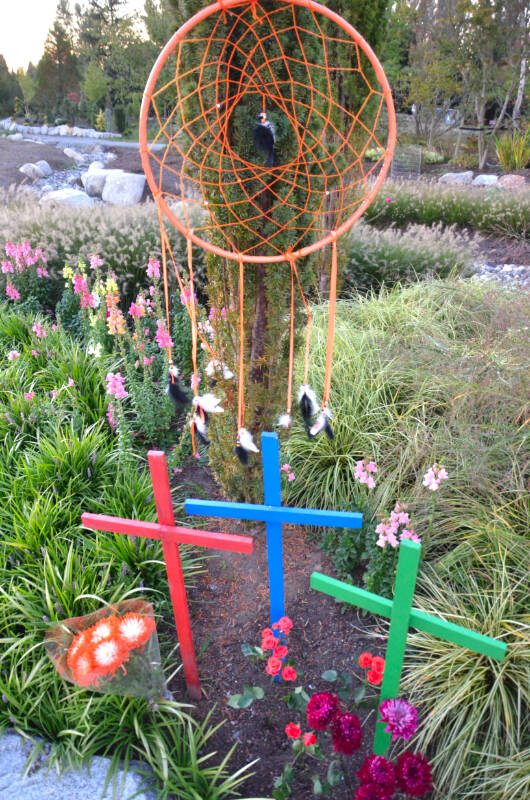 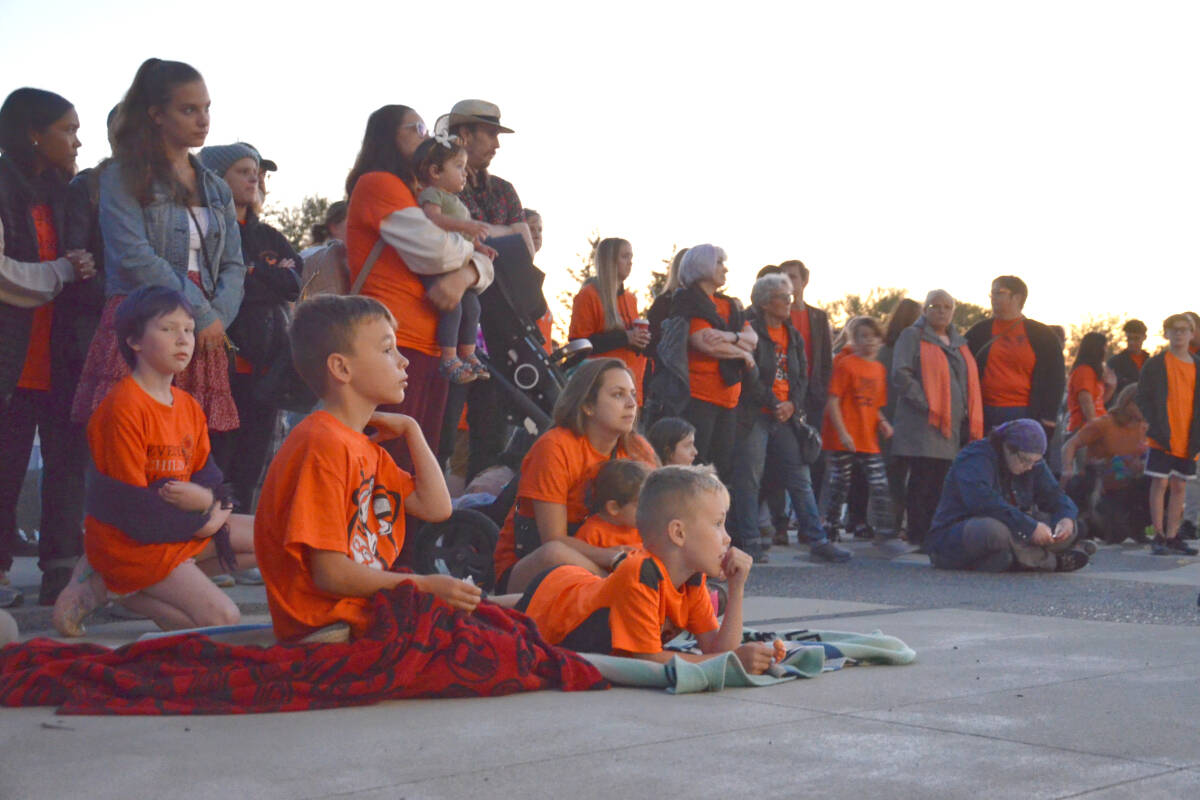 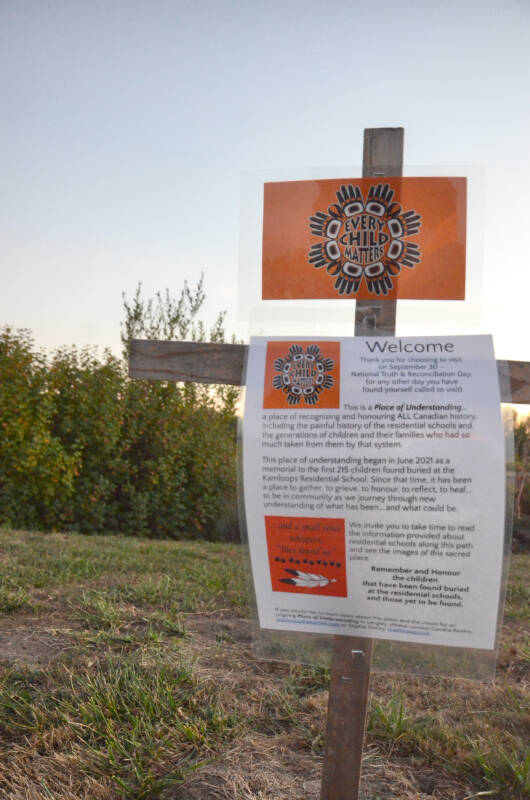 Wooden crosses line a pathway at the Derek Doubleday Arboretum, a memorial to children buried at residential schools. Many of the crosses have information cards or memorials left by members of the community. (Heather Colpitts/Langley Advance Times) 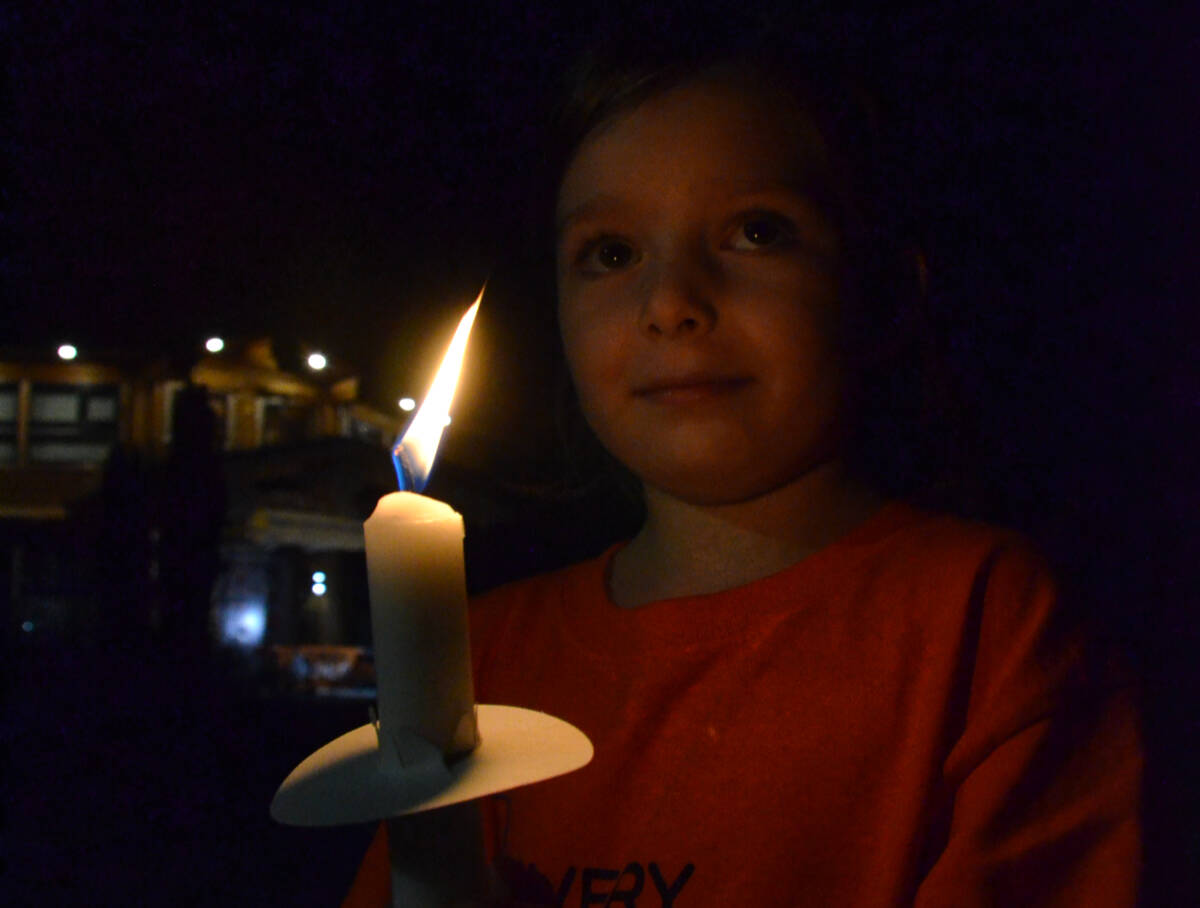 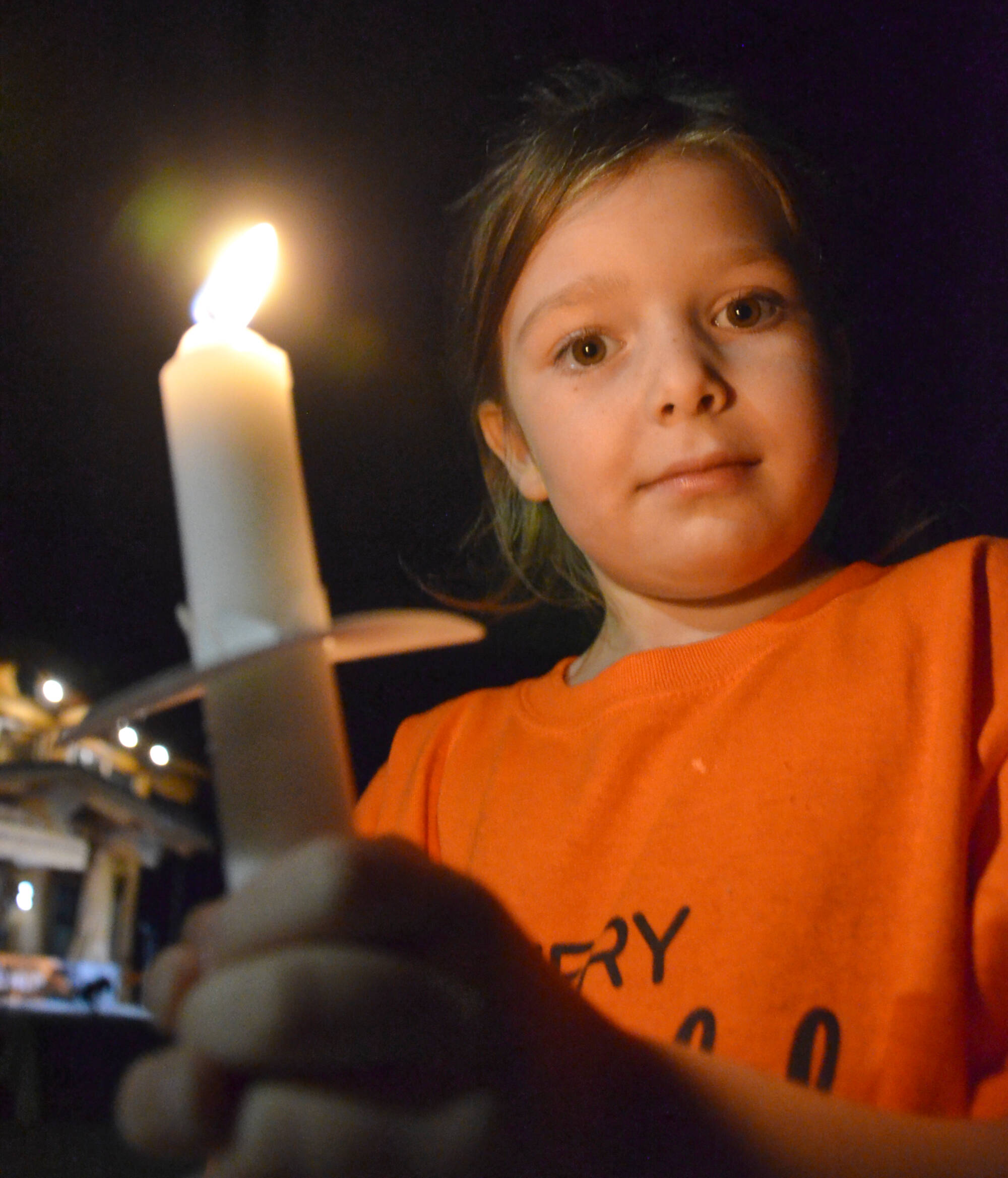 Drummers and singers took part in a community event to mark the National Day for Truth and Reconciliation Friday, Sept. 30, 2022, at the Derek Doubleday Arboretum. (Heather Colpitts/Langley Advance Times) 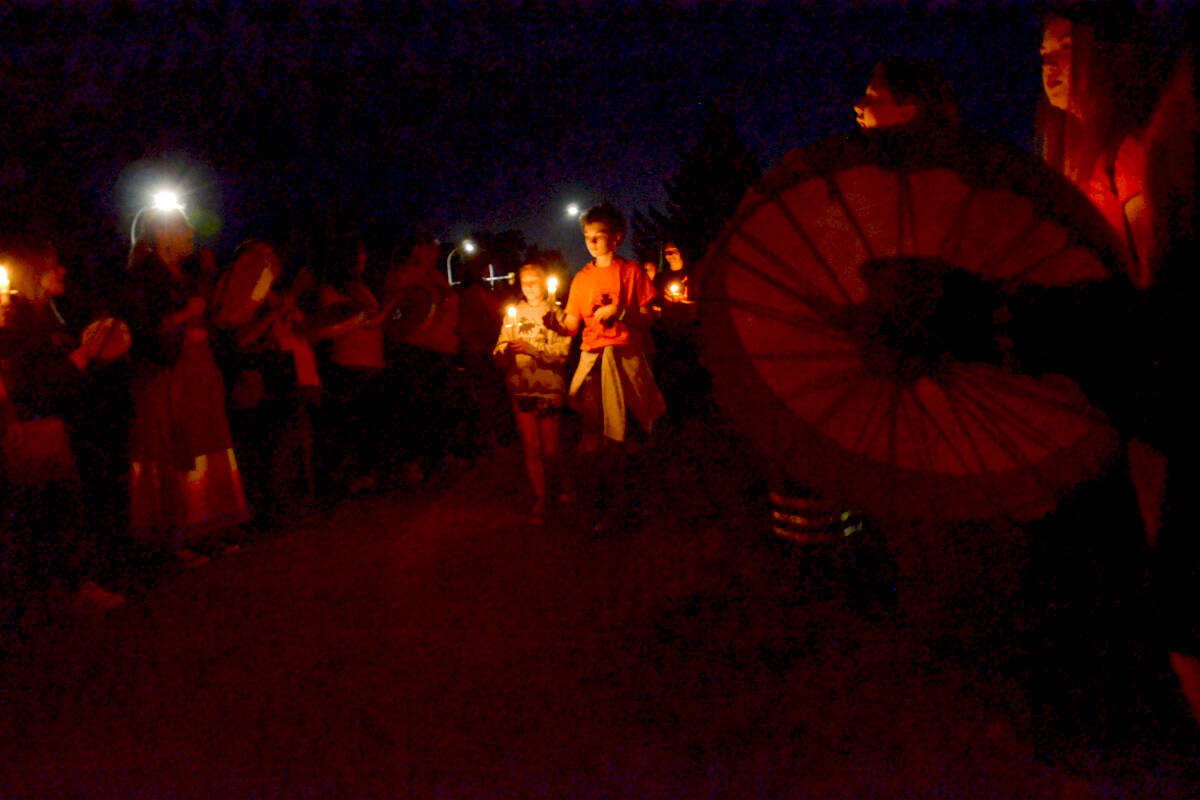 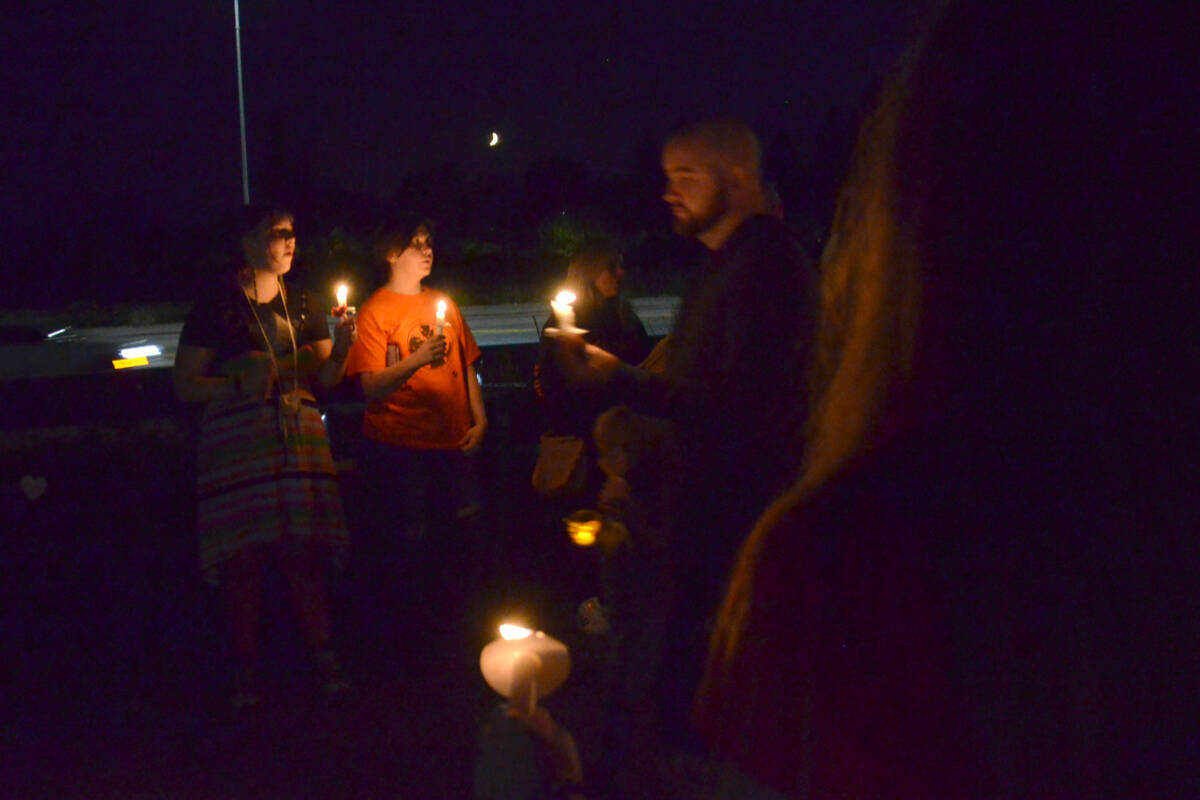