The Douglas Day planning committee is really good at keeping secrets. That’s how the members were able to surprise one of their own and a woman who has been a community booster for years.

Alice Johnson was surprised at the annual Douglas Day Pioneer Banquet on Tuesday by being given the Freedom of the Township, a unique honour only bestowed to a handful of other local residents.

“This designation is the highest civic tribute that can be bestowed by the Township of Langley in recognition of an individual’s outstanding community contribution,” said Township Mayor Jack Froese. “It isn’t often that we make someone a Freeman – or Freewoman – of the Municipality, but Alice Johnson is a remarkably dedicated, caring person who has given so much over the decades. She is truly deserving of this honour.”

Even though she is part of the group that plans the pioneer banquet for more than 400 people who attend, she didn’t know about the Township surprise that was planned. To bestow freedom of the municipality, all of council must vote in favour.

“I had no idea,” she said of being named a Freewoman of the Township.

She now lives with her brother in Fort Langley but spent many, many years living in Willoughby near the current site of the Langley Events Centre.

Born in New West, the 86-year-old who overcame colon cancer recently, has been involved in the community for years.

She has served on the Douglas Day Committee for over a decade, and with the Willoughby Community Hall and the Willoughby School Committees since the 1990s. Johnson was instrumental in preserving both heritage buildings, which remain thriving community centres that are still enjoyed today.

More than 25 years ago, she started the Willoughby Women’s Community Institute, to better homes and families in the community and around the world. Johnson has also served with the Township’s Heritage Advisory Committee, Langley Heritage Society, and the Langley Centennial Museum History Group, and been Queen Mother on May Day. She has earned the Township of Langley’s Eric Flowerdew Volunteer Award and was presented with the Rotary Club of Langley Central’s Women of Distinction Award.

Home is where the heart is

The banquet theme this year was homes, with the spotlight on heritage homes that have been preserved by the Langley Heritage Society or the current owners. One of those homes belonged to the ancestors of Alex Dickson.

He came from a family of four kids and worked in the forestry industry for years as a millwright.

He married Lois Schiller (her mother had a cafe in Fort Langley) back in 1962, right after she completed school.

He and his wife had four children, three girls and one boy, and they now have seven grandchildren and three great-grandchildren.

“Our Christmas table is getting smaller every year,” he joked.

He went to school in Fort Langley and high school at Langley Secondary. They’ve lived in various neighbourhoods, starting out their married life in a little house near Porter’s Store in Murrayville.

In his many years in Langley, he’s seen tremendous growth.

“The amount of traffic in Langley is outrageous,” he noted.

“Homes, single dwelling homes… our children can’t afford them. Every time I look around there’s a new apartment going up,” he said.

Homes have special memories for the 78-year-old.

Dickson was born in the 1940s-era family home near the Alex Houston home.

His grandfather was Alex Houston whose property at about 107th Avenue and Allard Crescent is one of the heritage houses spotlighted at the banquet and preserved in the community. The house building around 1912 stands on the site of the original Hudson’s Bay Fort at Derby Reach.

Dickson has fond memories of the house and visits with his grandmother.

“We used to go down there and watch wrestling.… We spent Saturday night watching wrestling,” he chuckled.

But with a proud history came a dark cloud, the denial of First Nations ancestry. Dickson’s great grandmother was First Nations.

“My parents didn’t believe that we should be connected with them,” he said, because of negative views of First Nations in generations past. “…It [being First Nations] was kind of frowned upon in the neighbourhood. But that’s changed now.”

It wasn’t until he was in his eighties that Dickson opened his life of to that side of his heritage.

“I’m a native son, and I’m an elder with the Kwantlen,” he said. “We just joined the Kwantlen family about five or six years ago.”

Pioneers celebrated at the 2019 Douglas Day event were: 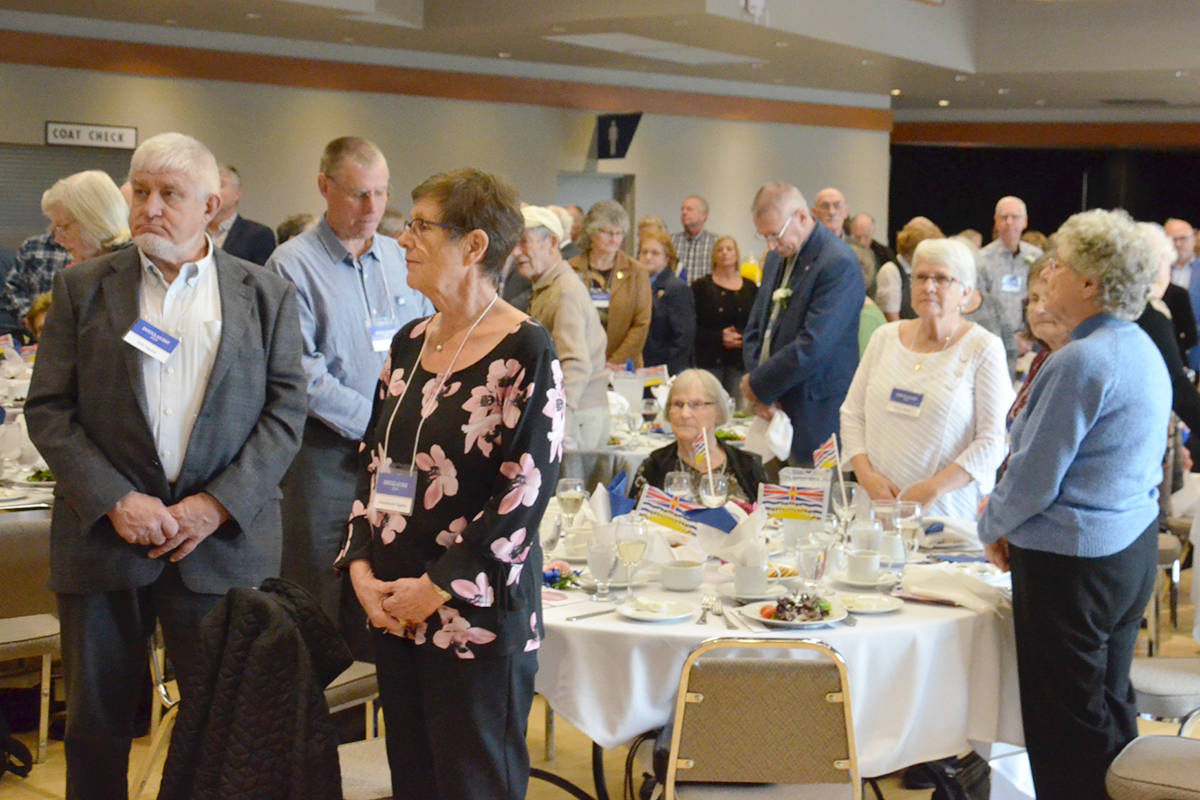 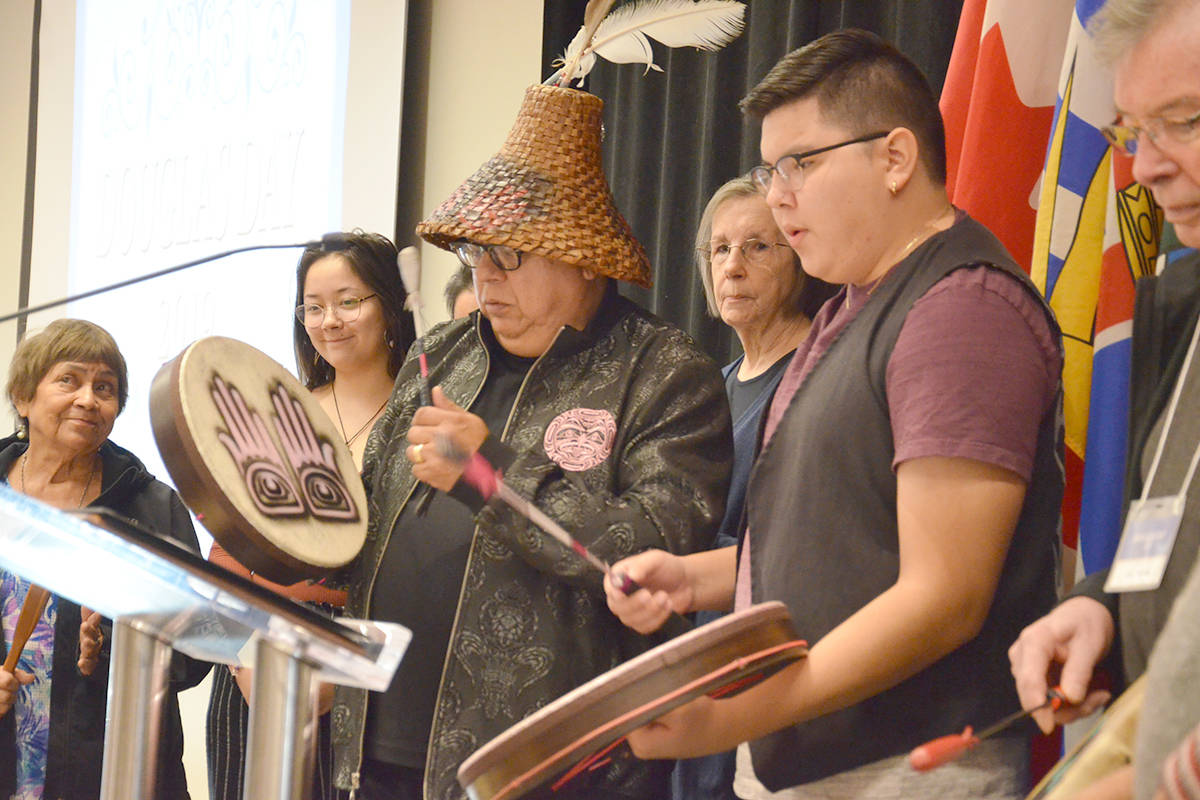 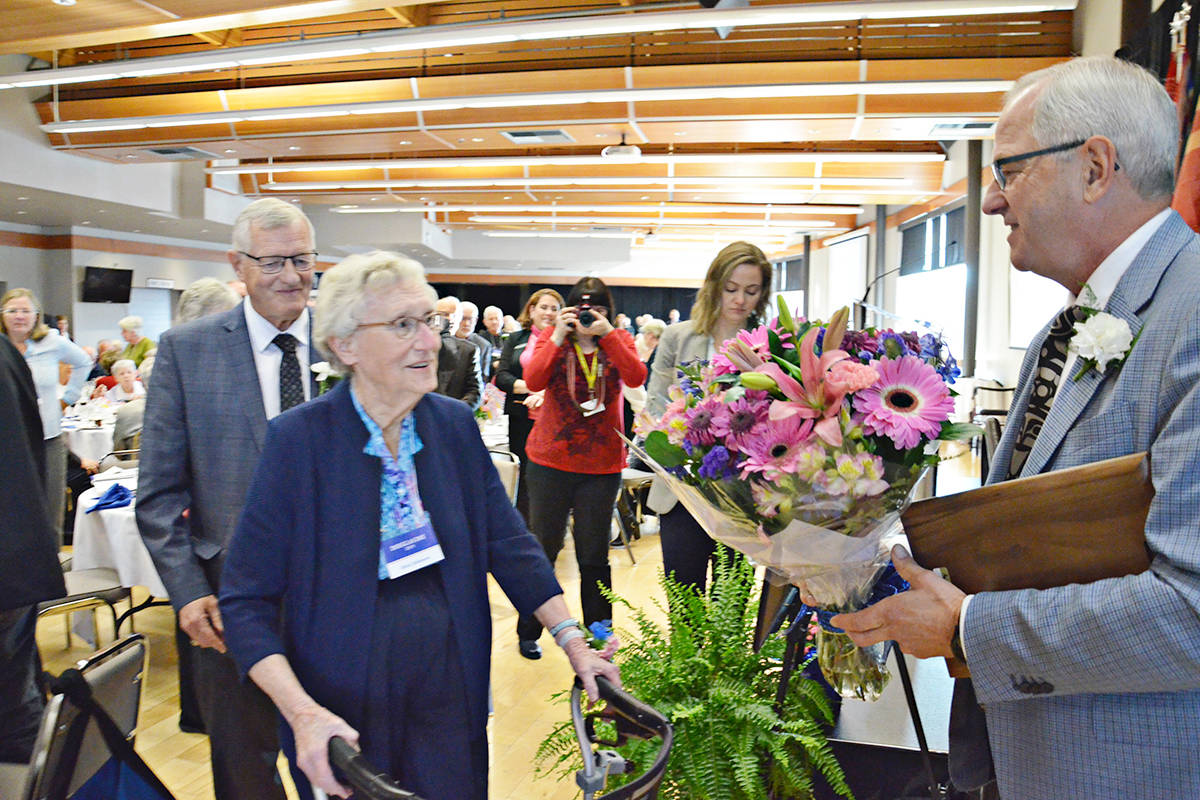 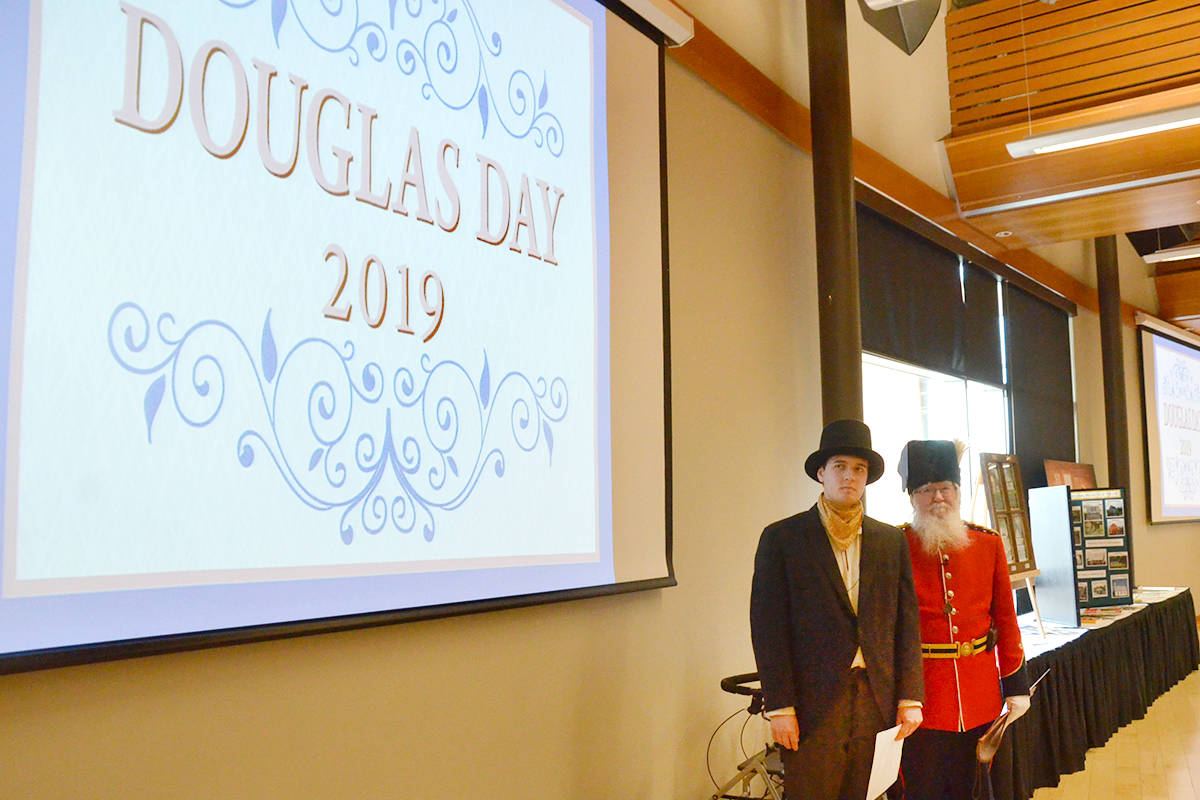 Re-enactors from the Fort Langley National Historic Site provided some of the entertainment at the Pioneer Banquet. (Heather Colpitts/Langley Advance Times) 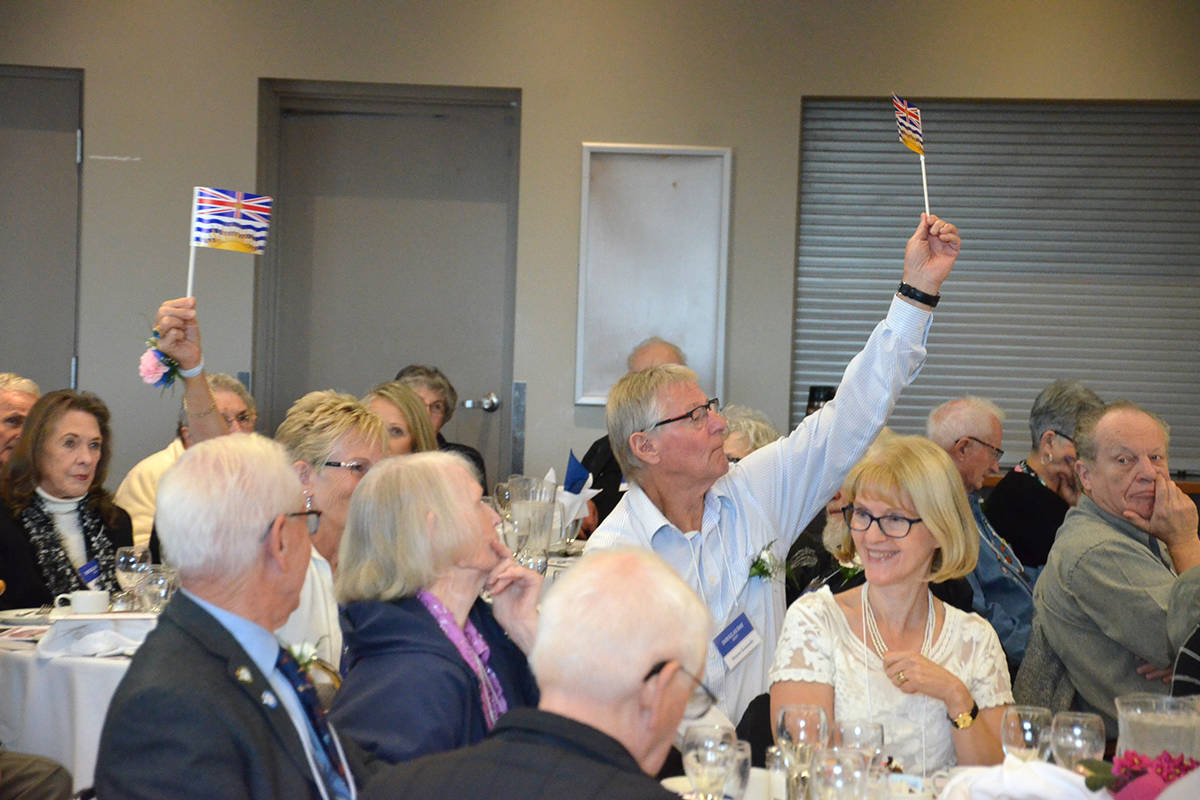 Langley pioneers waved B.C. flags when their names were read off. Langley is home to more than 200 people considered pioneers (be at least 70 years of age and lived here at least 60 years). (Heather Colpitts/Langley Advance Times) 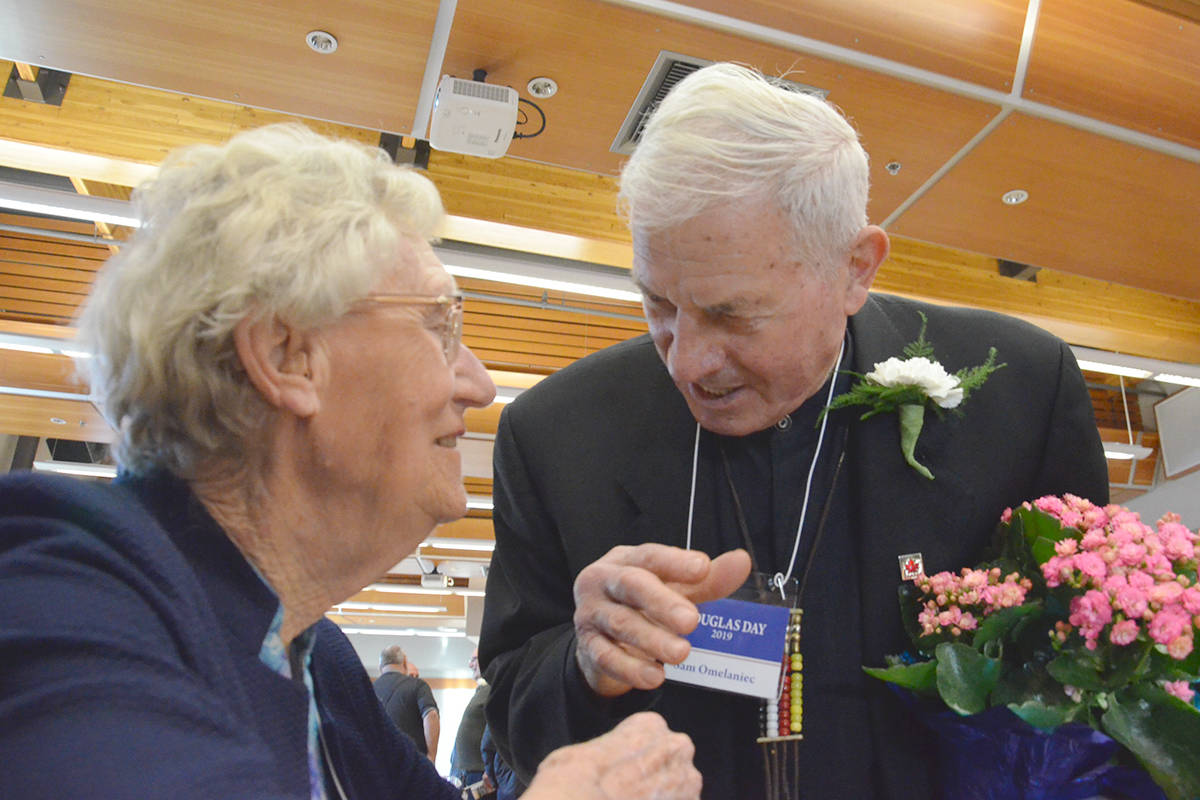 The Pioneer Banquet is a chance for longtime residents to catch up with old friends. Alice Johnson chatted with Sam Omeleniac. (Heather Colpitts/Langley Advance Times) 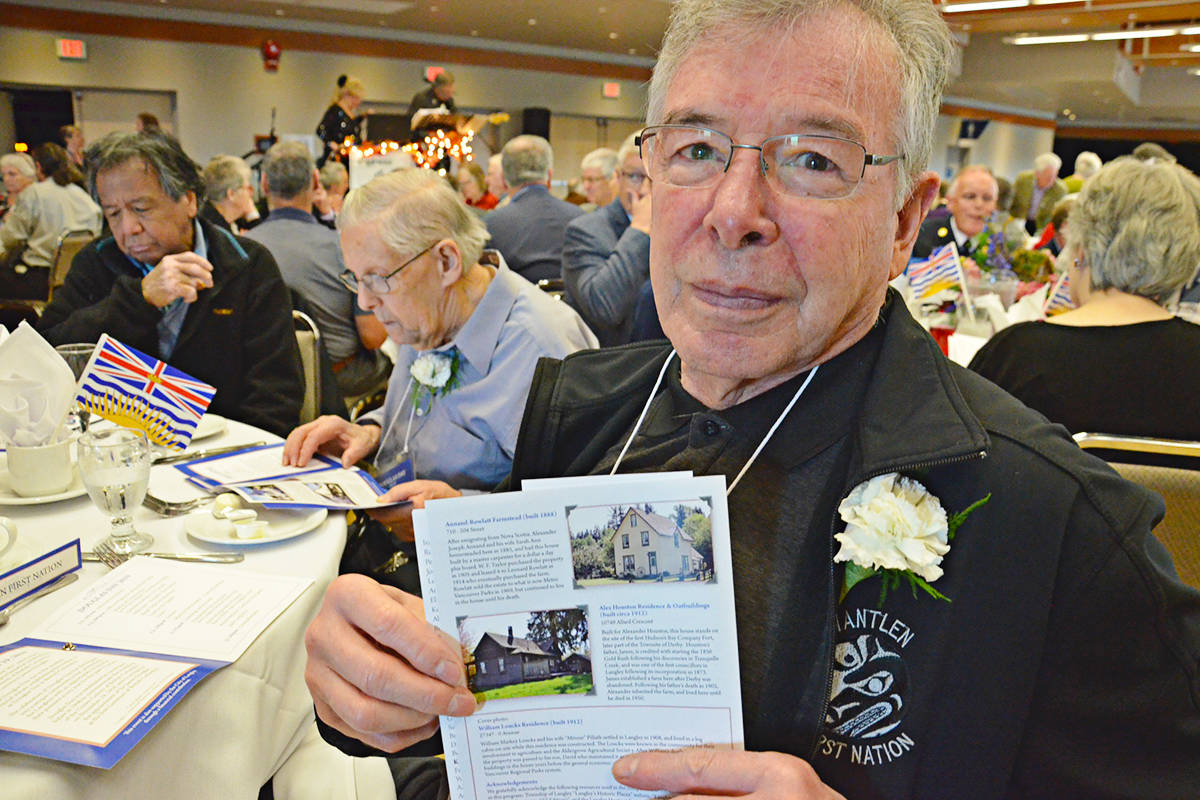 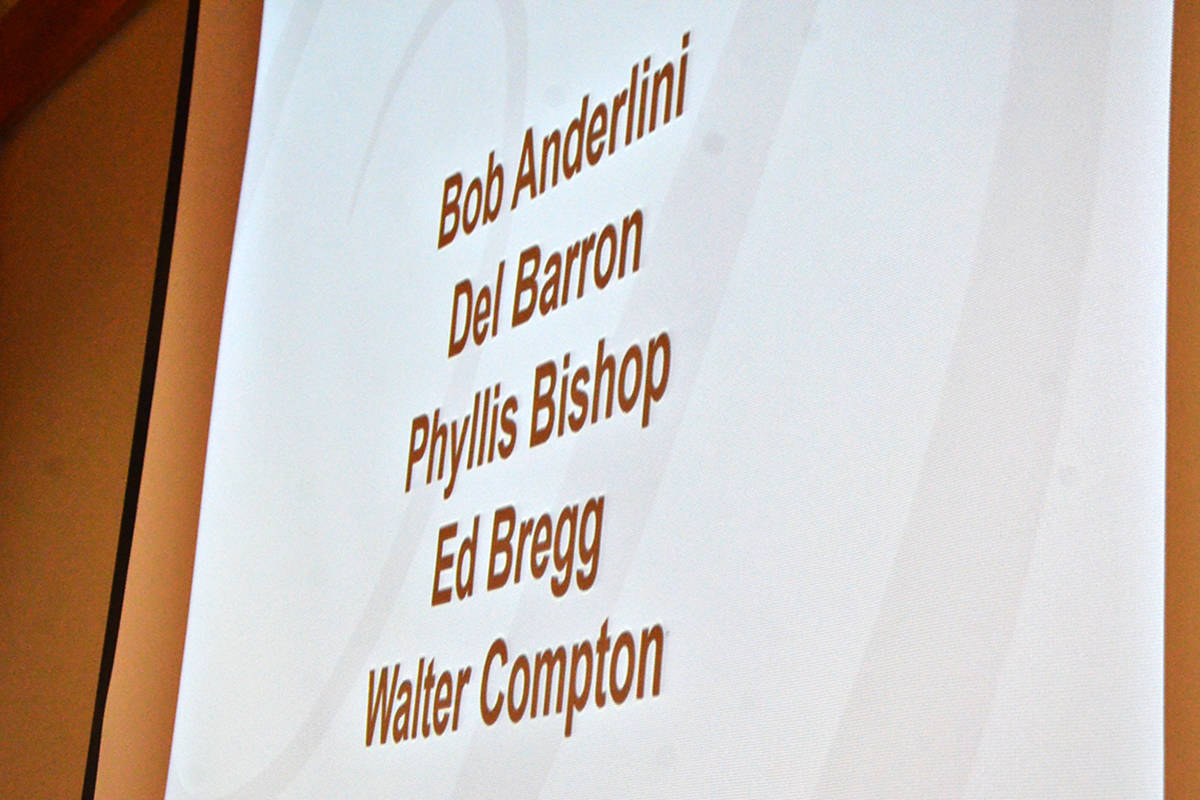 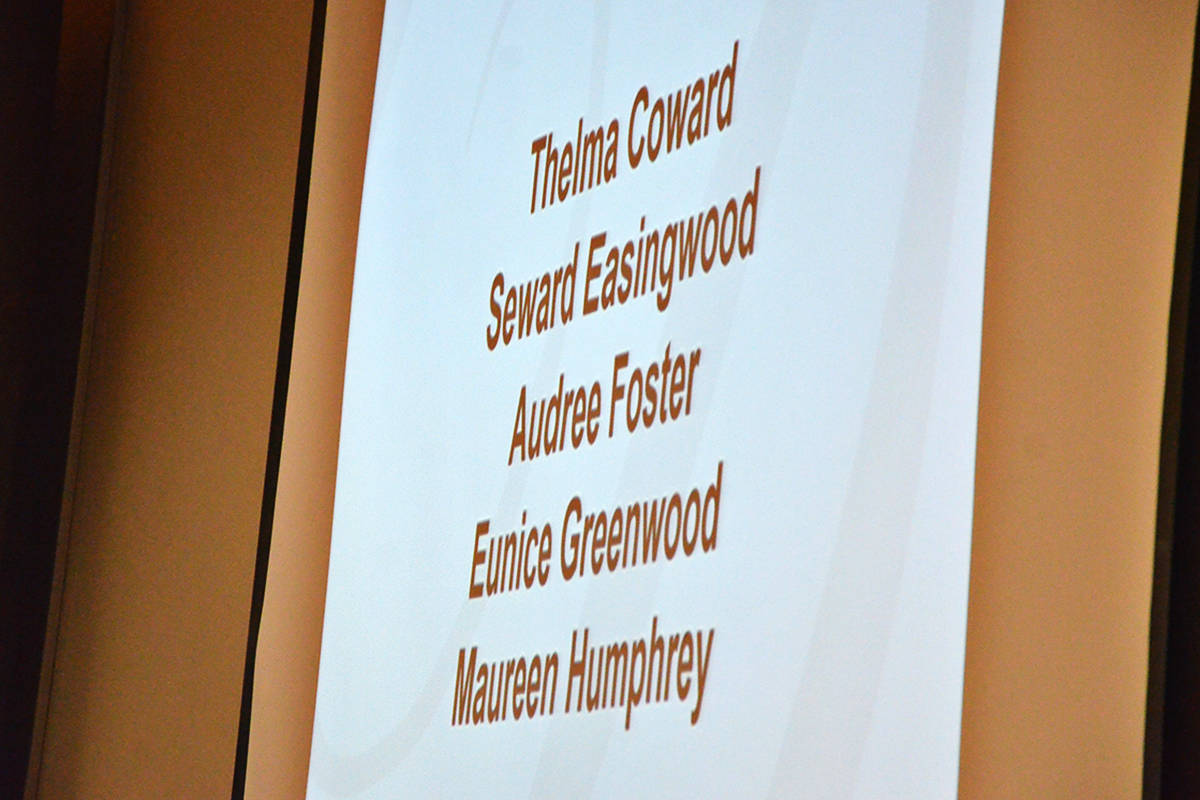 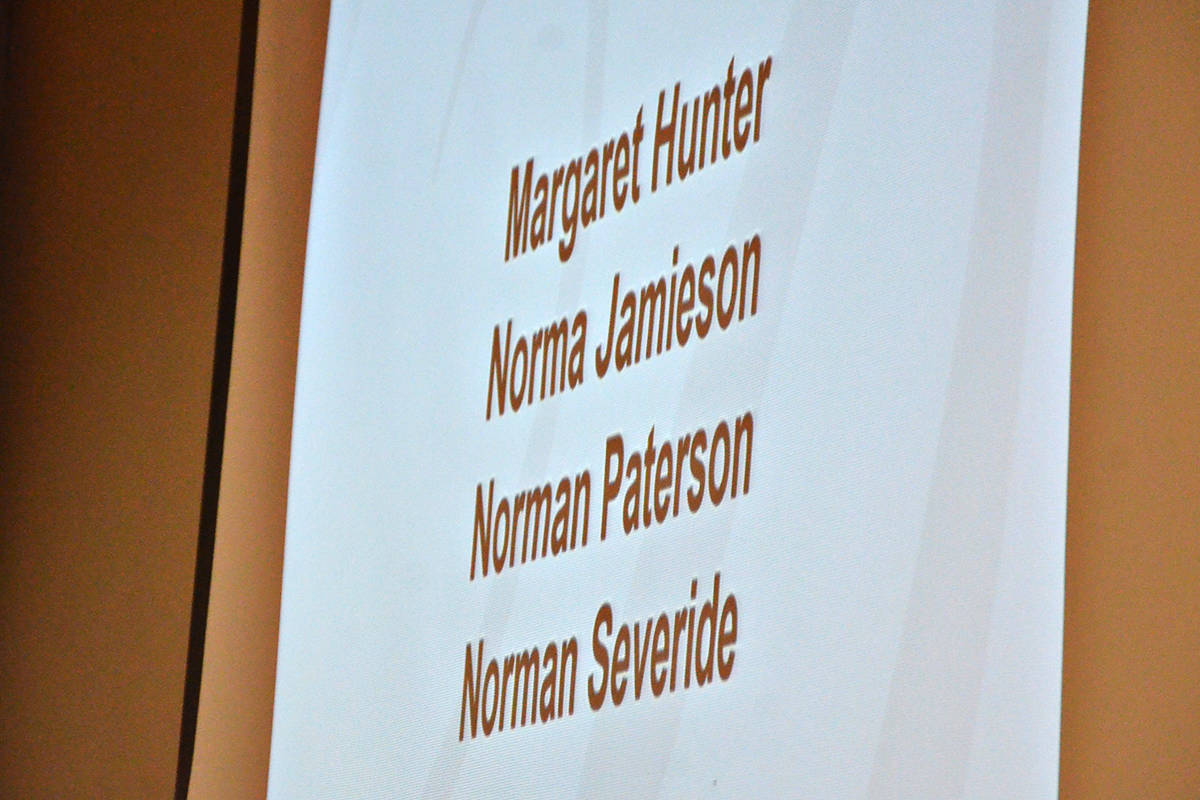