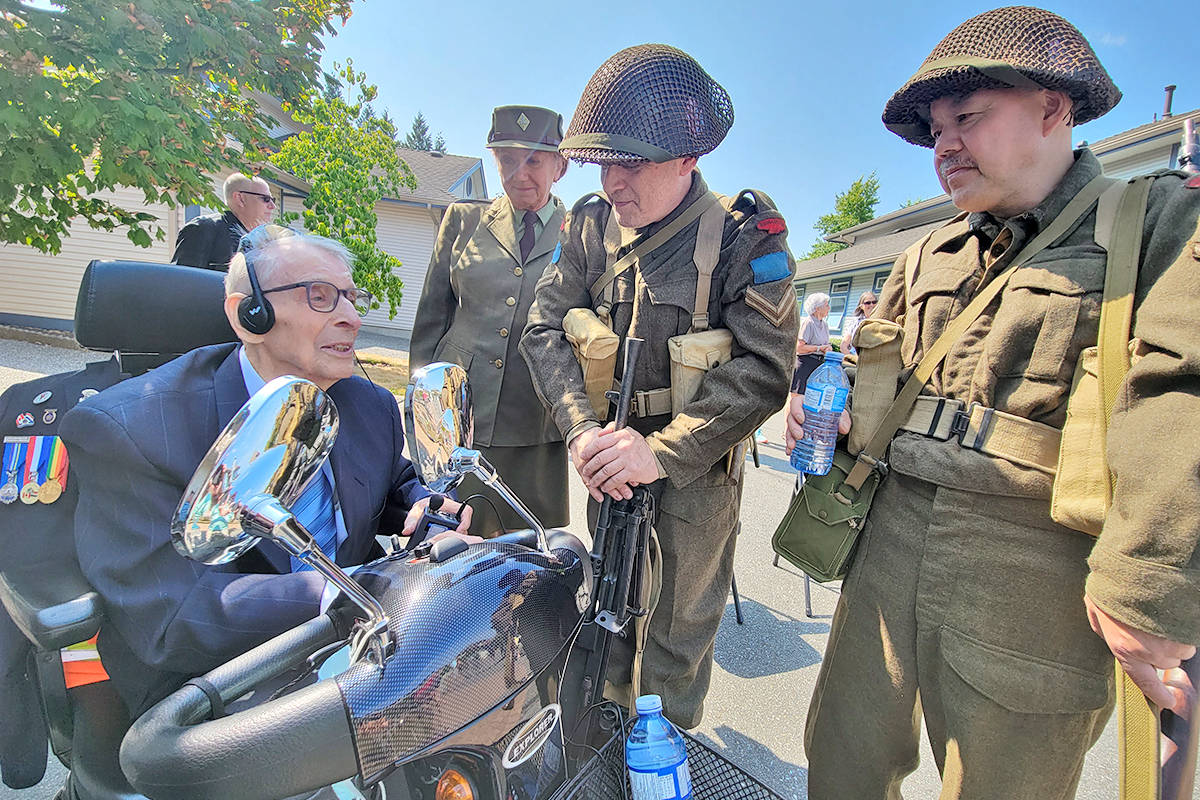 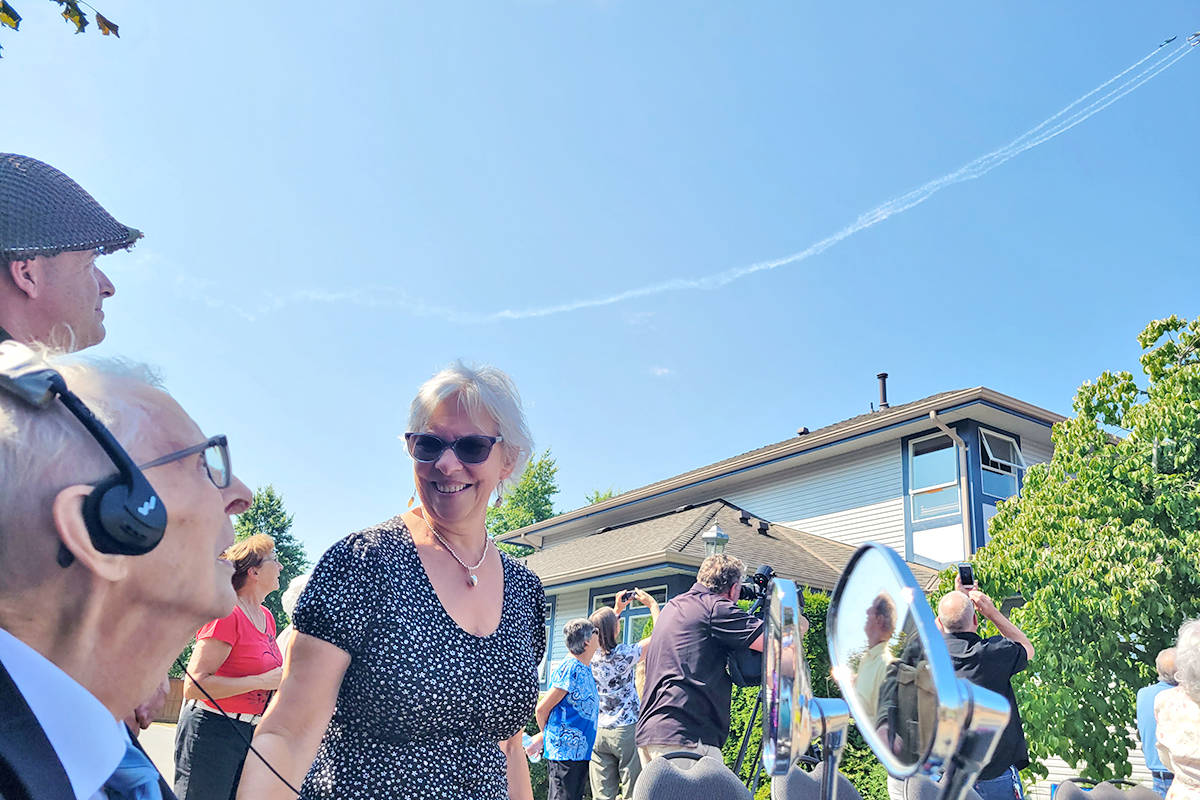 Murrayville’s John Swityk (L) turned 100 on Aug. 3, surrounded by family and friends and memories. Three planes from the Fraser Blues formation flying team did a fly-past for the veteran. (Dan Ferguson/Langley Advance Times) 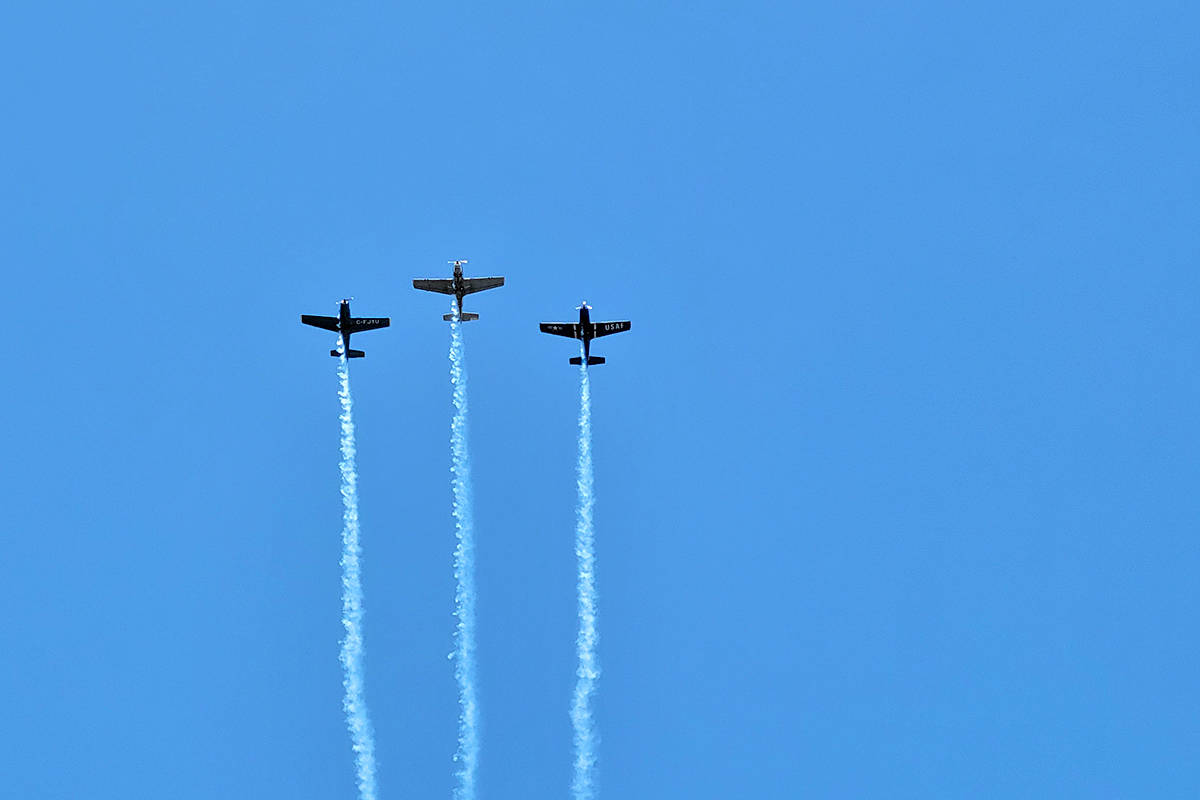 Murrayville’s John Swityk (L) turned 100 on Aug. 3, surrounded by family and friends and memories. Three planes from the Fraser Blues formation flying team did a fly-past for the veteran. (Dan Ferguson/Langley Advance Times)

Langley Second World War veteran John Swityk entered his 100th year on Tuesday, Aug. 3, surrounded by family, friends and memories from his days as a soldier.

Among the guests at the outdoor, carefully spaced birthday event, were people in period military dress from the time when Swityk and other Canadians landed on Juno Beach as part of the Allied campaign to retake Europe from Nazi Germany.

There was a military jeep, and a cannon on display outside the Murrayville site of the celebration, and overhead, a flight of three planes from the Fraser Blues formation flying team, trailing smoke, did a flypast for the delighted Swityk. 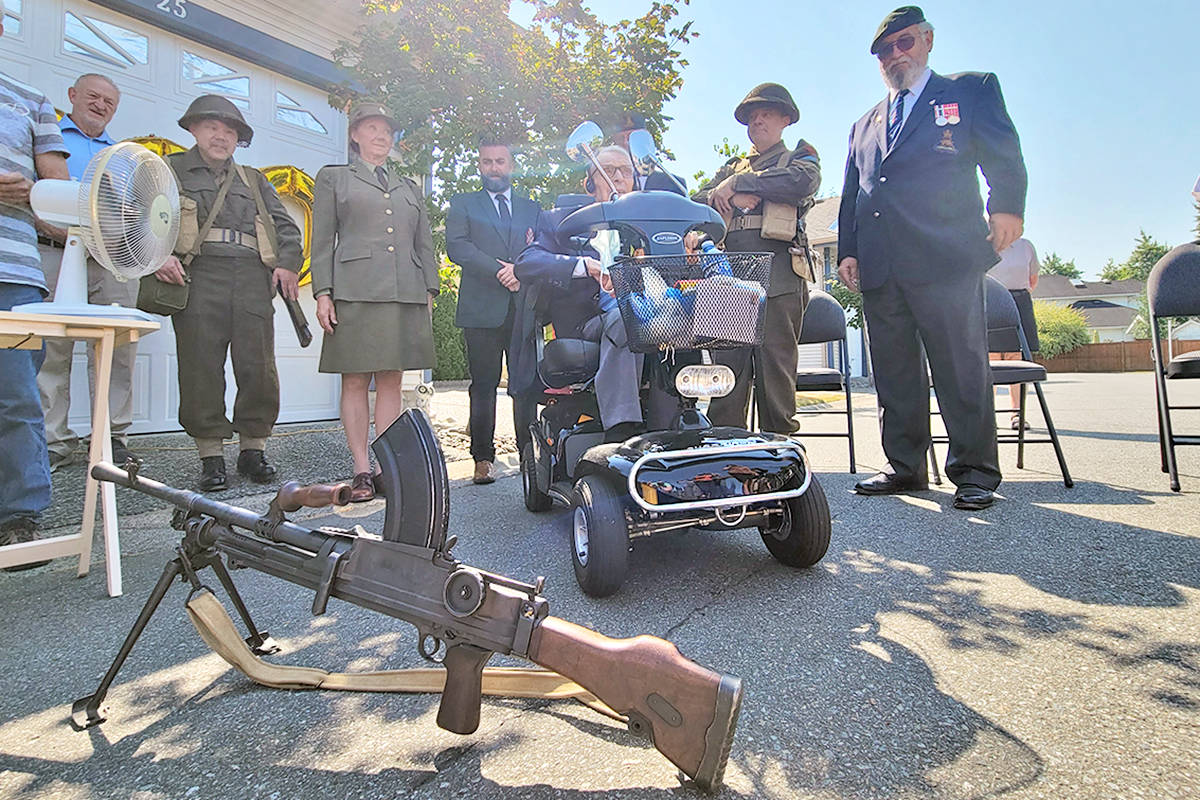 Murrayville’s John Swityk (L) turned 100 on Aug. 3, surrounded by family and friends and memories, including an example of the Bren gun the self-described ‘shortest guy in the regiment’ carried as a member of a Canadian anti-tank platoon during the Second World War. (Dan Ferguson/Langley Advance Times)

The surprise that got the biggest reaction from the great-grandfather was a Bren gun, presented by one of the military visitors.

“I had one of those,” Swityk said, chuckling.

Swityk, who described himself as the “shortest guy in the regiment” was a Bren gunner, in charge of the 25-pound weapon.

He drew laughs and applause as he described how, a week after D-Day, he was given a battlefield promotion to sergeant, over his objections.

“I just wanted to be an ordinary guy,” he recalled.

What happened next was a surprise.

“He gave me the stripes to take over.”

“I was made NCO with no training,” Swityk reminisced.

“All of a sudden, in the middle of the front lines, I’m in charge. And I had to make all the decisions.”

He insists he got the promotion simply because no one else wanted it, and the one man everyone thought should be sergeant flat-out refused.

Still, he admits the higher-ups seemed to think it worked out in the end.

“They said they made the right decision,” Swityk commented, smiling.

A profile of Swityk for his birthday, prepared by family friend Eleanor Swan, recorded him saying “he was not a hero, but did his duty the best he could do.”

His daughter Dianne Swityk has a different view.

Swityk was nearly 19 in 1940 when he enlisted with the First Battalion of the Regina Rifles in North Battleford, SK.

On D-Day, June 6, 1944, Swityk landed on Juno Beach, Normandy as a member of an anti-tank platoon, fighting through Normandy, Belgium, the Netherlands and into Germany, until the Germans surrendered.

In 2015, Swityk was appointed a Knight of the National Order of the Legion of Honour, receiving the highest French honour from French consul-general Jean-Christophe Fleury at a presentation in Langley.

“Thank you for making my country a free country,” Fleury said, praising Swityk for his “extraordinary bravery.”

Swityk was among 600 Canadian veterans recognized for their participation in the D-Day invasion that led to the liberation of France and the defeat of Nazi Germany.

Every Remembrance Day, he has faithfully laid a cross in memory of his regiment, including a solitary visit last year during the pandemic that forced a cancellation of public gatherings.

“The reason I come is because when I landed on D-Day, I saw for the first time in my life dead people… bodies floating around in the water. They were my friends,” Swityk said.

“I’m here for them. For all the people we lost. For my friends.”

Langley, don’t play in the clay