Doris Riedweg just about didn’t survive to make it to her nursing school graduation back in the 1950s.

Due to graduate that evening, she and her fellow nursing students were toured through the infectious disease ward by a teacher who wanted to show them what they may encounter in hospitals that treat polio patients.

Polio had ravaged the world for several decades by the time Doris was finishing up her schooling and people hardest hit by the infectious virus could no longer breath on their own. They were often put into iron lungs, coffin-like machines that used strong pressure to force air into and out of people’s lungs.

“I know several people that were crippled for life,” she said about polio.

If the electricity went out, which was common in decades past, nurses and other hospital staff would have to work the iron lungs by hand.

The instructor asked for a volunteer so the student nurses could try hand pumping. Riedweg was up for it and got in the machine. The students took their turns.

“They started talking and forgot about me,” she said.

“I was just terrified,” she said.

The young woman began to fear for her life.

“I didn’t think I was going to see my graduation that night,” she said.

Someone finally turned and saw her tears, and she was busted out.

It’s one of the memories save up that she and another retired, local nurse, Kay Palmer, have from decades of caring for others.

The two nurses say that as tough as nursing was from the 1950s through to the close of their careers a few decades later, they don’t envy modern nurses for what they go through, particularly with COVID.

“There’s no history. It’s a new bug. I think people should understand that,” Palmer said.

Medical science can’t say what will be the long-term impacts of COVID.

“Nobody really knows because this is new,” she said.

Both women sit on the Langley Memorial Hospital Heritage Committee which oversees a small museum of local health care located in a historic home, Michaud House, in Langley City. With COVID, the little museum is closed but eventually it will reopen, hopefully when the pandemic becomes part of the history that it preserves.

Riedweg spent most of her nursing life working in operating rooms while Palmer loved her many years in maternity but with a hospital the size of Langley Memorial, nurses would be exposed to all manner of injury and illness, working in various departments.

A student of Murrayville Elementary and Langley High School (now Langley Secondary) she cleaned at the hospital on summer breaks and school breaks, working her way up to become a care aide before heading to Vancouver General’s nursing school. She graduated in 1958, started her career at VGH then moved to the local hospital in 1960.

“I loved maternity. It was where I wanted to be. I loved the newborns. It has its good and bad moments. But I loved it all. I never a day in my life when I regretted,” Palmer said. “We had times when our staffing was very very limited and it was difficult to do the kind of nursing you wanted to do.”

Palmer and Riedweg worked in nursing in an era when there weren’t the lifesaving devices and diagnostic tools of today. They faced deaths as a part of their work. Palmer said it was a time before there was hospice so people near the end of life were typically in the hospital.

She said sometimes the most important thing she could do for a patient was to just be with them and holding their hand as they departed this world.

Palmer considered it a privilege to be able to care for people during some of the worst times in their lives – medical crises.

During this modern medical crisis, Riedweg was reading up on polio recently, and it brought new perspective to what’s going on today. Polio was first detected in Canada around 1910. The vaccine was announced in 1955 and was publicly available a few years after invention.

“That’s many years longer than it took for a COVID vaccine,” she noted.

The medical community announced this mysterious new illness in late 2019 and public vaccinations started in late 2020.

“What a change,” she commented.

Riedweg said nurses of her era had to deal with lots of contagious illnesses – measles and mumps and even some smallpox before it was stamped out, thanks to vaccines.

“I started school in 1936, and I can remember the nurses coming around and vaccinating us for all these things,” she noted. “I don’t remember anyone refusing.” 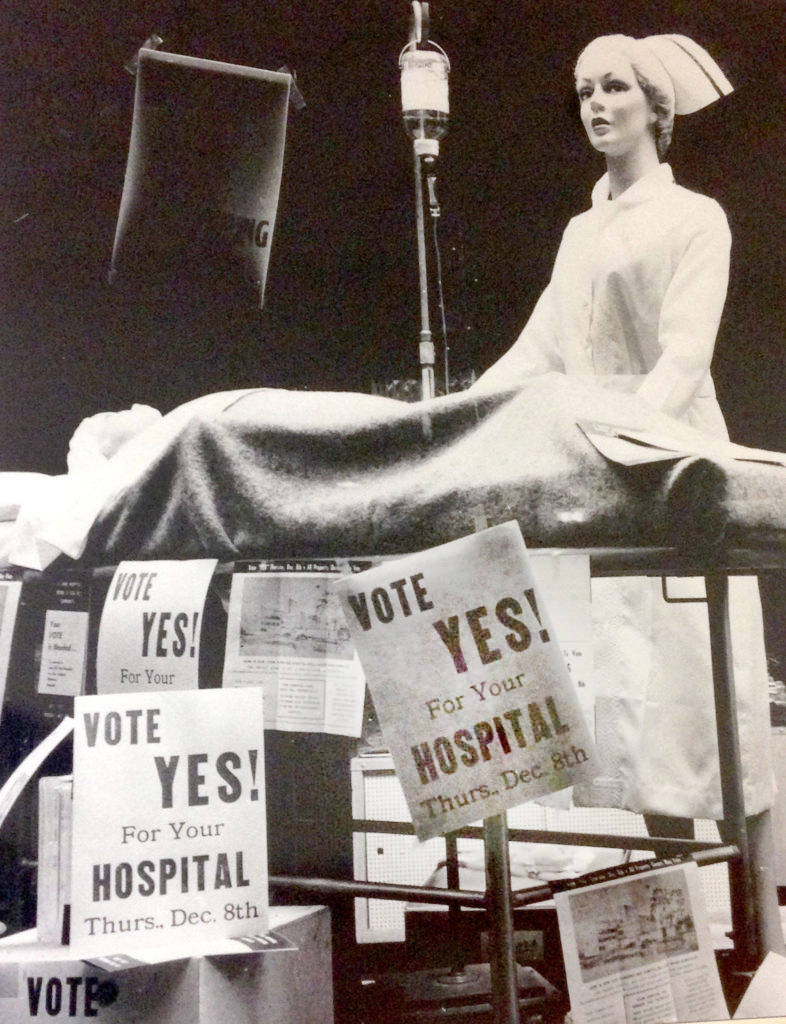 The community was asked about building a hospital, lobbied with such things as a window display. With public approval, the faciity opened soon after the Second World War. (Langley Advance Times files) 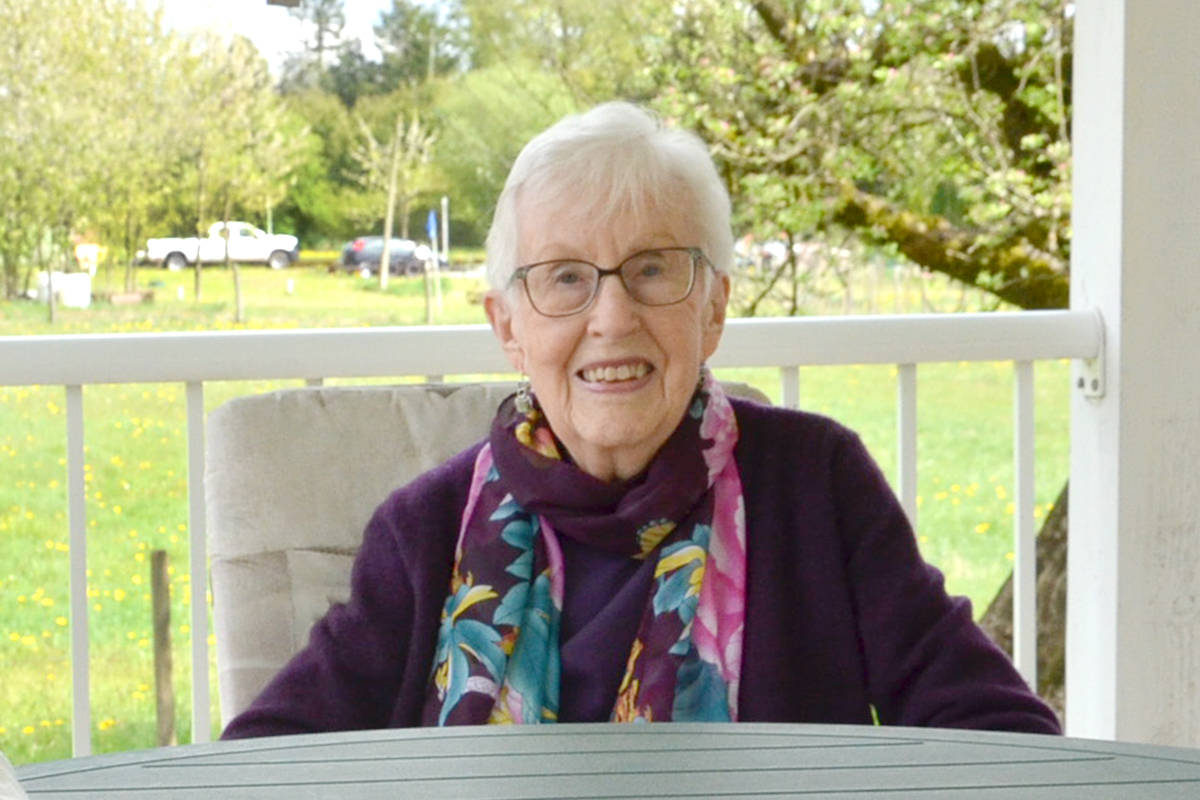 Doris Riedweg started nursing in the 1950s and spent most of her career at Langley Memorial Hospital. (Heather Colpitts/Langley Advance Times) 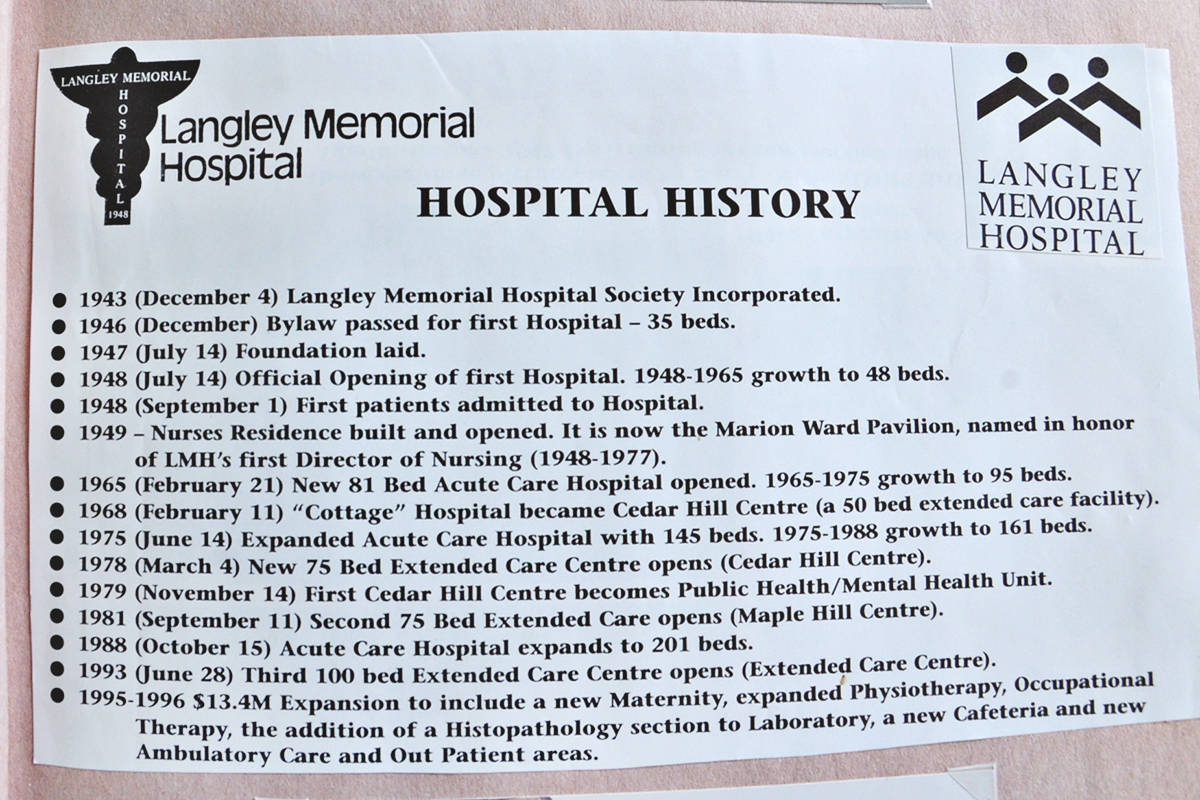 When Kay Palmer retired, her co-workers presented her with a scrapbook of photos and memorabilia, including a hospital history. (Palmer family/Special to the Langley Advance Times) 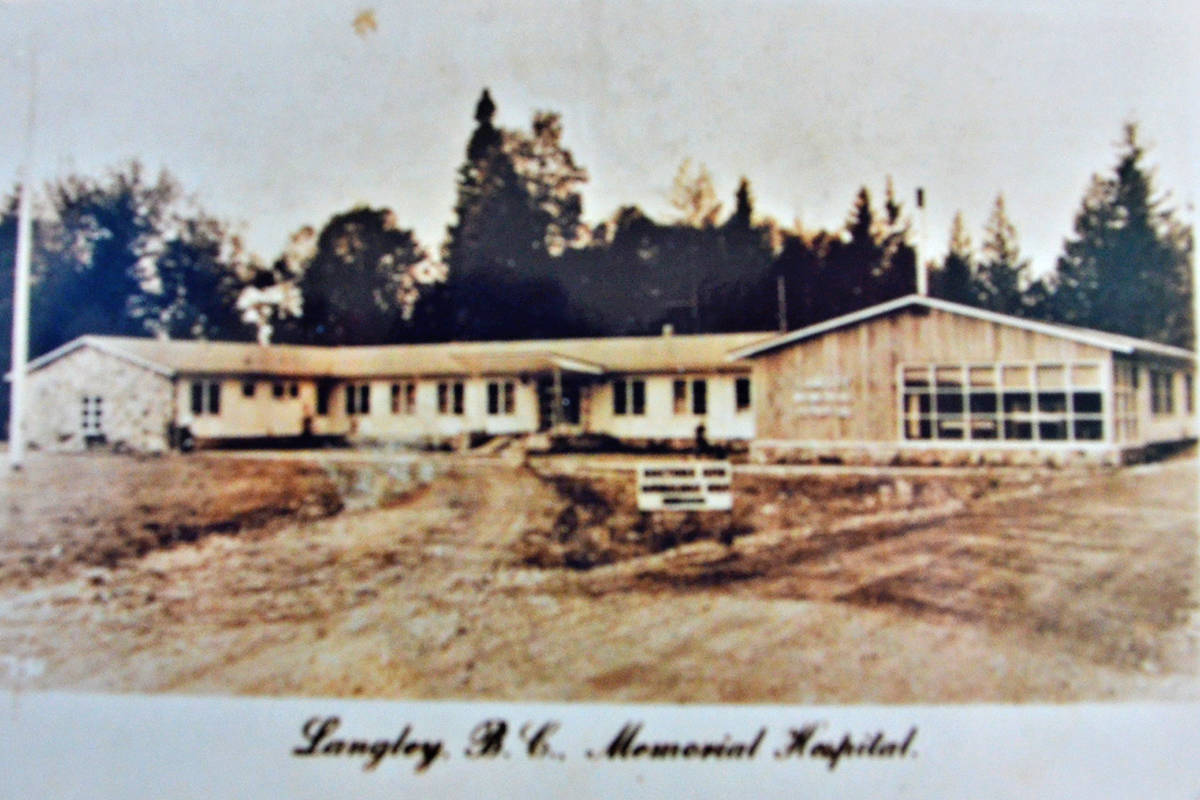 Langley Cottage Hospital was renamed Langley Memorial Hospital as it grew alongside the community it served. (Palmer family/Special to the Langley Advance Times) 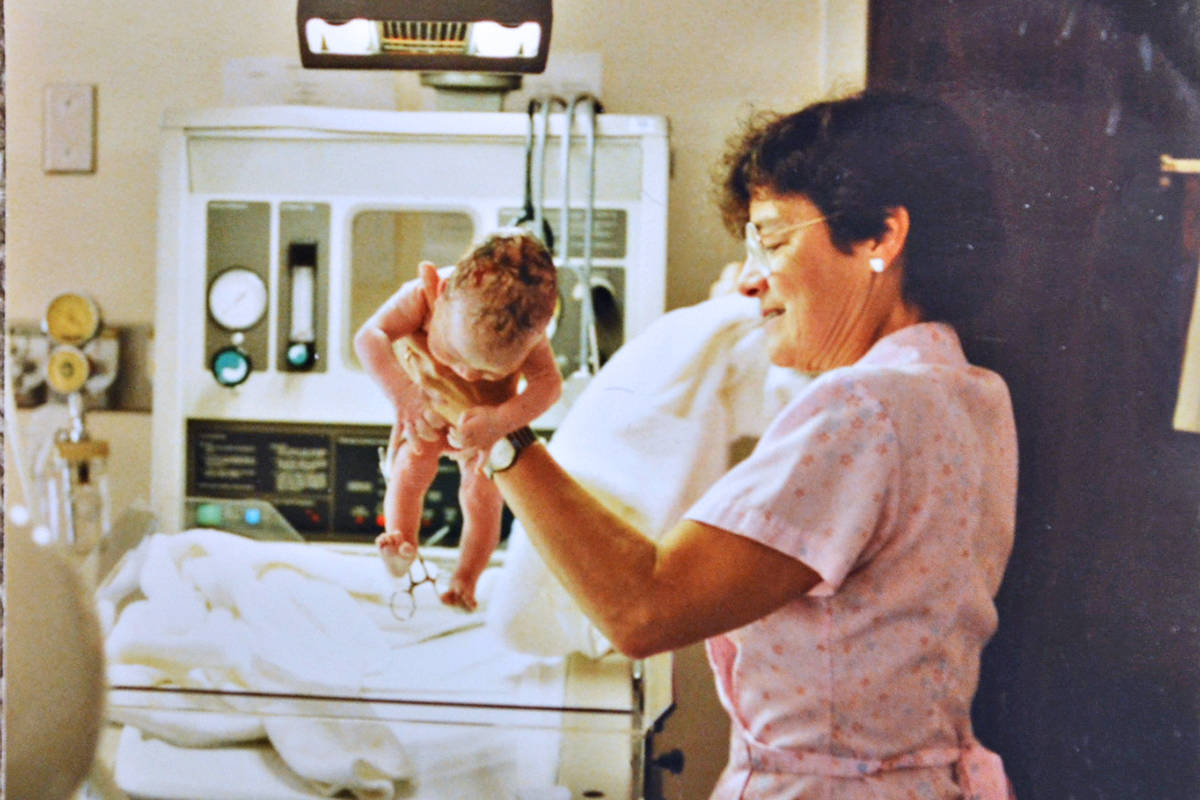 Kay Palmer was a nurse at Langley Memorial Hospital for many years, spending several of those working in the maternity ward. (Palmer family/Special to the Langley Advance Times) 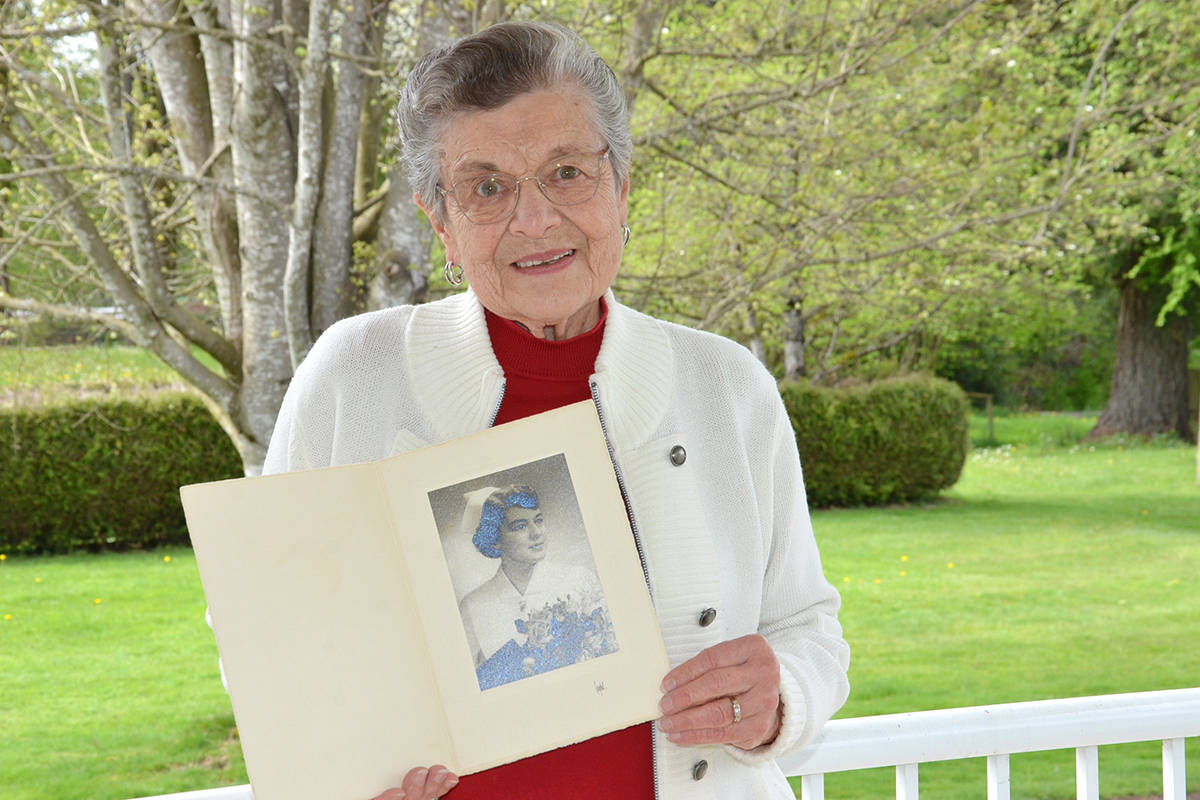 Kay Palmer still has the graduation photo from when she became a nurse. She worked for many years at Langley Memorial Hospital starting in 1960. (Heather Colpitts/Langley Advance Times)