Gerry Landsman spots a familiar sight, a wide-eyed little kid, left speechless by the sight of the train diorama.

Landsman is holding a controller that starts and stops the scale model locomotives that run through a painstakingly detailed miniature landscape in the restored caboose parked on the tracks to the west of the heritage CN station in Fort Langley.

On this particular day, the trains on the Glen Valley model railway are a mix of “iron horse” steam engines with a few, more modern diesels, all chugging past a roundhouse, old-time industrial buildings, and a small town – complete with people and an antique bus waiting or passengers.

“It’s a generic railway setting,” Landsman explains, “set in the 1950s so it represents the Canadian National transition from steam to diesel engines.”

For more than 20 years, the 75-year-old Landsman has been volunteering at the heritage CN train station, located at Mavis Avenue and Glover Road.

Landsman has been a modeller of miniature trains and the terrain they traverse since the 1970s, when an initial lack of space compelled him to work with “N Scale” model trains, which run on nine millimetre tracks.

Over time, the display grew to fill a double-car garage, but when he and his wife downsized to a townhouse, the size of the display was also reduced, Landsman said.

As a train enthusiast, Landsman was naturally drawn to the heritage CN station in Fort Langley.

One day in 1995, he was visiting the 1915-era station with his son. He got to talking with a member of Langley Heritage Society who was interested to hear that Landsman built model railways.

Work was underway on a tabletop re-creation of classic trains in the caboose out back, she said. Would he be interested?

Landsman, working with another modeller, Glen Gebert, and spent about five years to build the first version in HO scale – a slightly larger train on 16.5 millimetre tracks.

“I’ve been here ever since,” he says. And on most summer weekends, Landsman can often be found in the caboose, running the trains.

Depending on the month, the look of the display can change to pay tribute to a particular period in railway history.

“On Labour Day, we run a special labour train, where people from the ’30s had trouble finding work and climbed the trains and went to Ottawa to complain about it. We change things all the time.”

In the era of the steam engines, he notes, railroads were an important part of the economy.

“Back in the day, one in three worked for the railways,” he said.

For a train aficionado, who is interested in the history of railways of the Lower Mainland and Fraser Valley, it is a “rewarding” opportunity to share that knowledge with visitors, Landsman says.

And its fun, he adds, “being a kid with little kids who come to see us.”

On Monday, Victoria Day (May 20) the heritage train station will re-open to the public from noon till 4 p.m.

After that, it will operate Saturdays and Sundays from noon till 4 until the Cranberry festival in October, with the exception of July and August, when it will also be open Thursdays and Fridays.

Admission is by donation.

Originally built for the Canadian Northern Railway in 1915, the Fort Langley train station is one of the few remaining stations like it in western Canada, and the only surviving station from this era in the Langley region.

In addition to the caboose, the site is home to a restored railway passenger car and a velocipede (a small human-powered rail car) on loan from the B.C. farm museum.

Owned by the Township of Langley, the station is maintained and operated by the Langley Heritage Society.

It was declared a municipal heritage site in 1984. 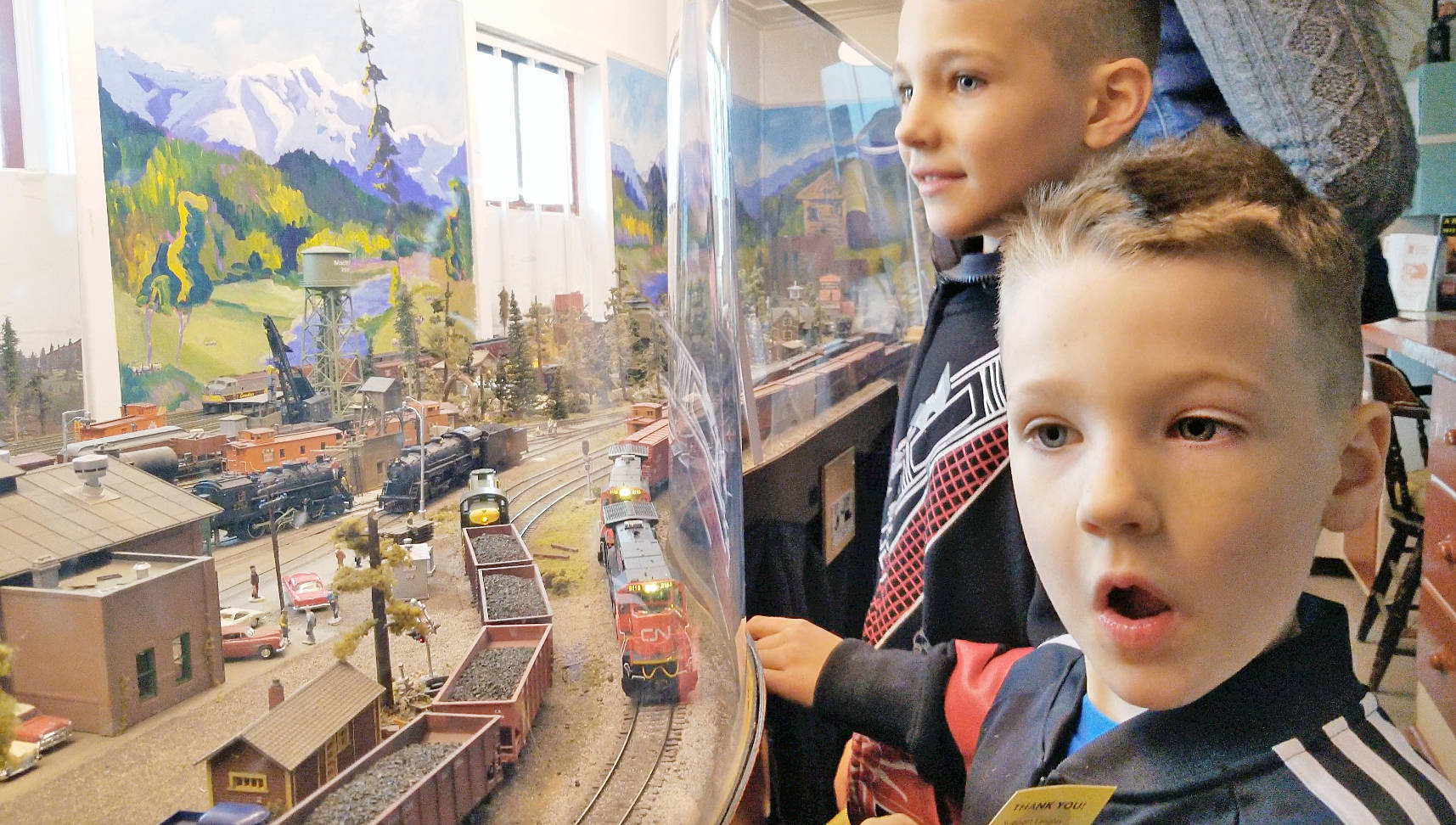 Two young visitors get a look at some railway history in miniature at the heritage CN Rail station in Fort Langley. Dan Ferguson Langley Advance Times