On Monday, July 19, a group of cyclists who describe themselves as ‘Young-at-heart, old guys’ will set out from Abbotsford on a 65-day, 10,000 kilometre ride across Canada to raise awareness and funds for 65 life-giving wells in Africa, in partnership with Langley-based Global Aid Network (GAiN).

Rider Mike Woodard described as “tragic” the fact that an estimated 1 billion people on the planet do not have access to clean water.

“As a result, every 90 seconds a child dies from a water-related disease,” Woodward recounted.

“This ride is a way of helping others who cannot help themselves.”

The Cyling 4 Water (C4W) team will depart at 7 a.m. from Yale Secondary School in Abbotsford where they will be seen off by Abbotsford Mayor Henry Braun before they leave on the journey, heading first to Tuktoyaktuk and the Arctic Ocean, then touching the Pacific Ocean at Prince Rupert, and finishing their epic journey at the Atlantic Ocean in the Halifax area.

The first “Sea 2 Sea” ride in 2014 started with a conversation between Woodard and his long-time friend Rob Montgomery, a veteran, lifelong cyclist.

Rob shared his dream of cycling across Canada and asked Mike if he would consider doing it with him the summer they both turned 60.

Mike had just started doing some short distance cycling and had never considered any form of long distance riding, let alone a ride across Canada.

The idea did intrigue him, and he agreed to think about it on one condition.

Mike explained to Rob, “If I’m going to do this it has to be for a cause. I can’t do it just for fun because I’m not sure it will be fun.” Rob immediately agreed.

The search for a cause landed with water wells because it’s such a basic need, saves lives and transforms families and communities. Global Aid Network (GAiN) became the cause partners and the ride started to take shape. Mike and Rob recruited two more cyclists and a support vehicle driver to join them.

They found sponsors who provided a support vehicle and the funds to cover their expenses so that all the funds raised would go to GAiN.

The Cycling 4 Water team is looking for help from individuals who have compassion for the cause. Support can be expressed in the form of donations, riding alongside the team, hosting the riders as they come through communities across Canada. 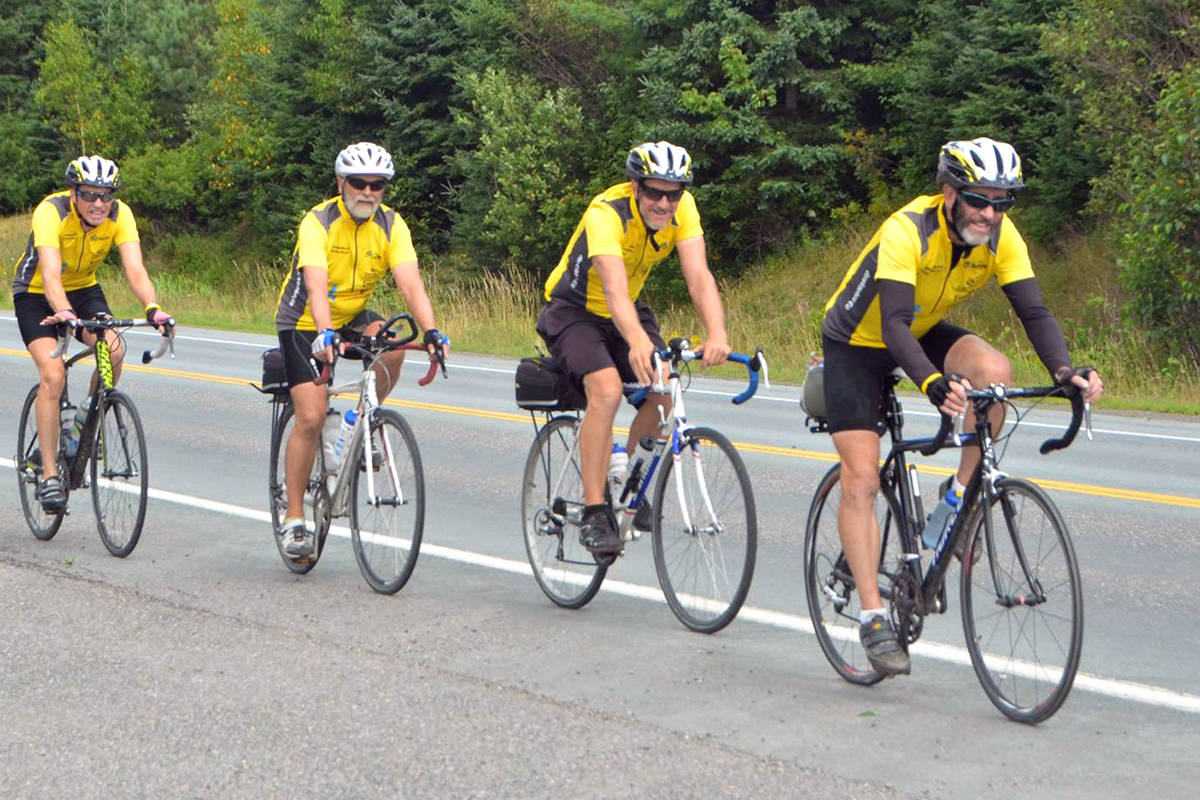 On Monday, July 19, a group of cyclists will set out from Abbotsford on a 65-day ride across Canada to raise awareness and funds for 65 life-giving wells in Africa, in partnership with Langley-based Global Aid Network (GAiN). Seen here is the 2014 ride. (Special to Langley Advance Times)

VIDEO: Fundraising for victim of human trafficking; why a Langley cyclist will be riding 12 hours non-stop