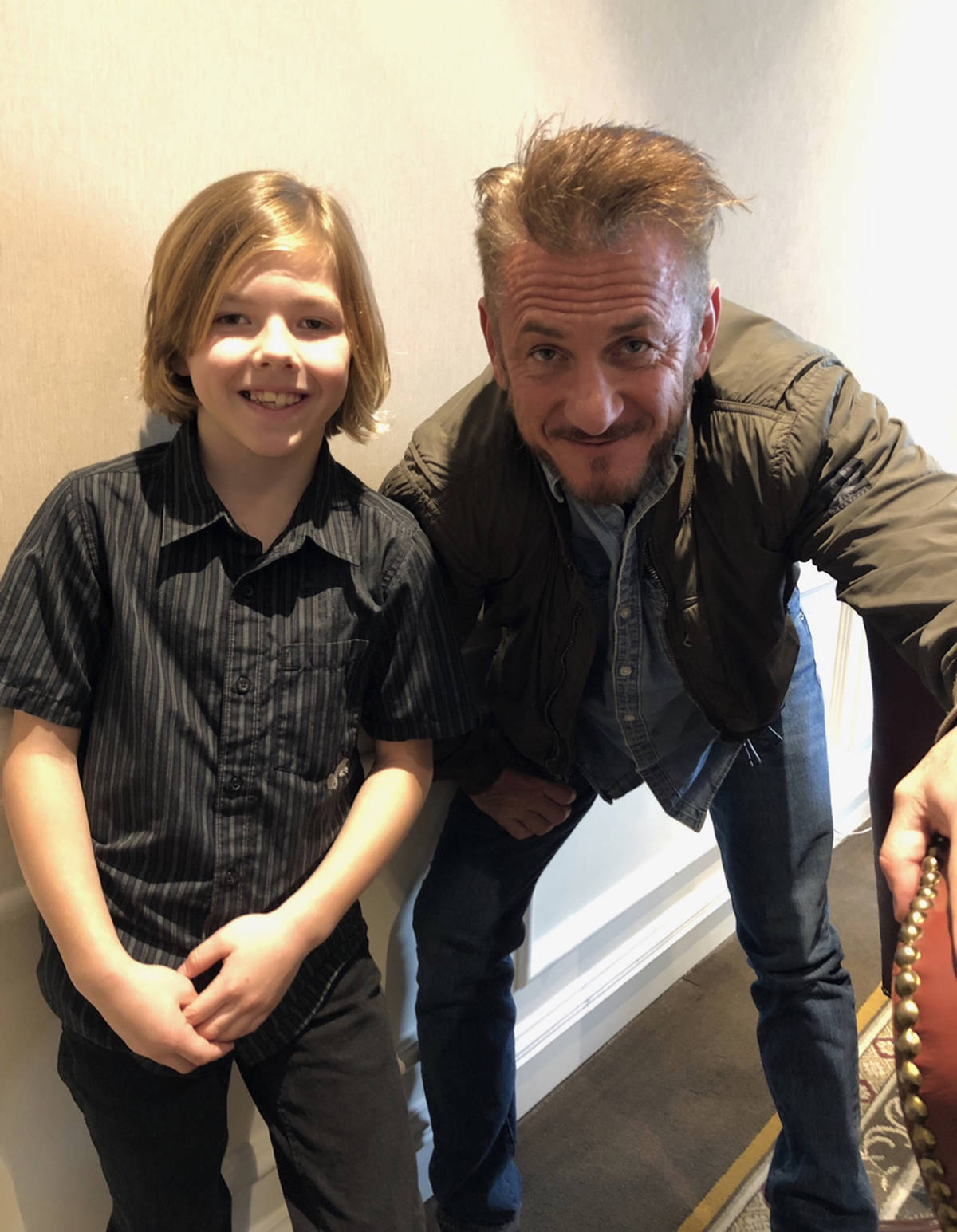 Beckam Crawford Skrypnyk hangs out with Sean Penn during filming in Winnipeg for the new movie “Flag Day.” (Photo: Submitted) 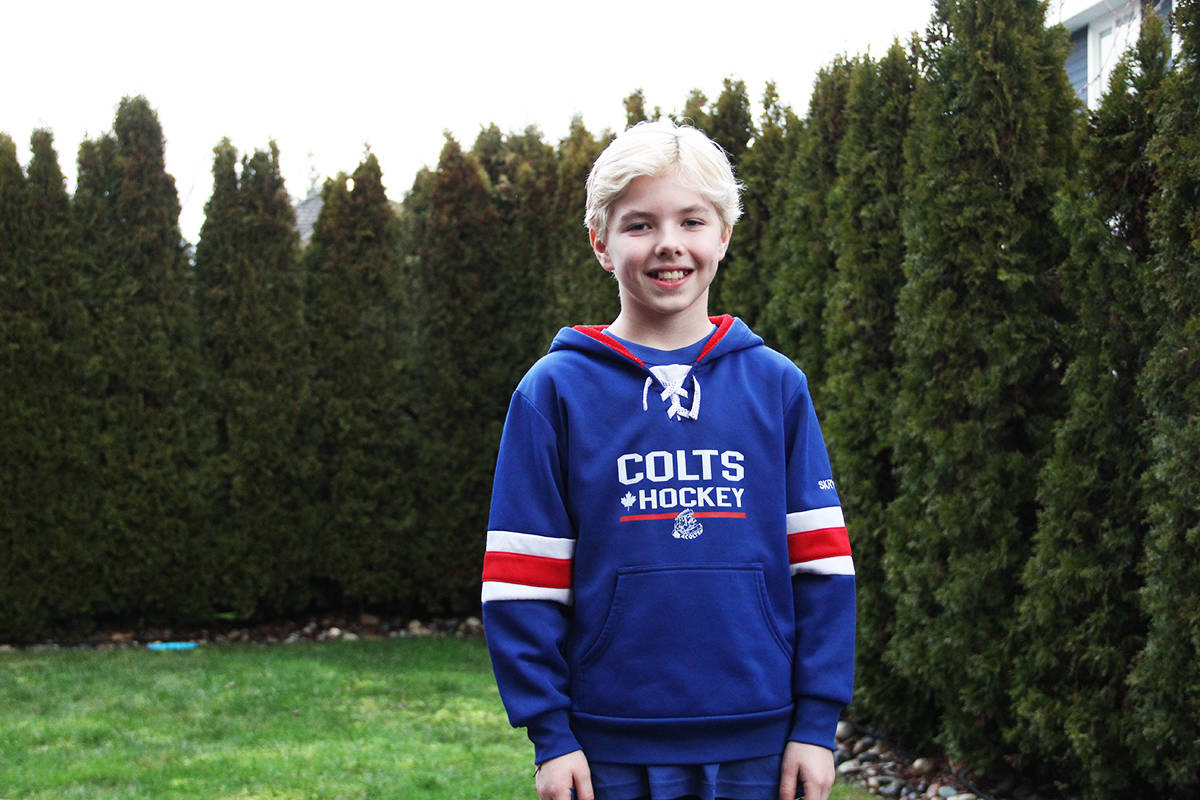 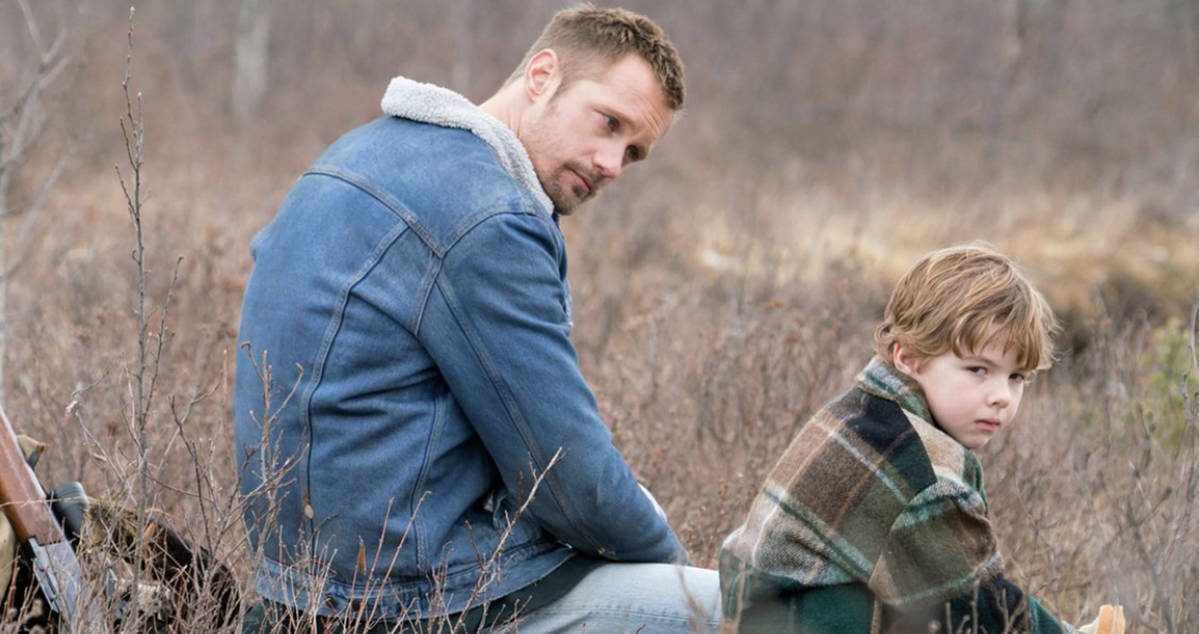 Alexander Skarsgård sits with Beckam Crawford Skrypnyk in a scene from “Hold the Dark.” (Submitted) 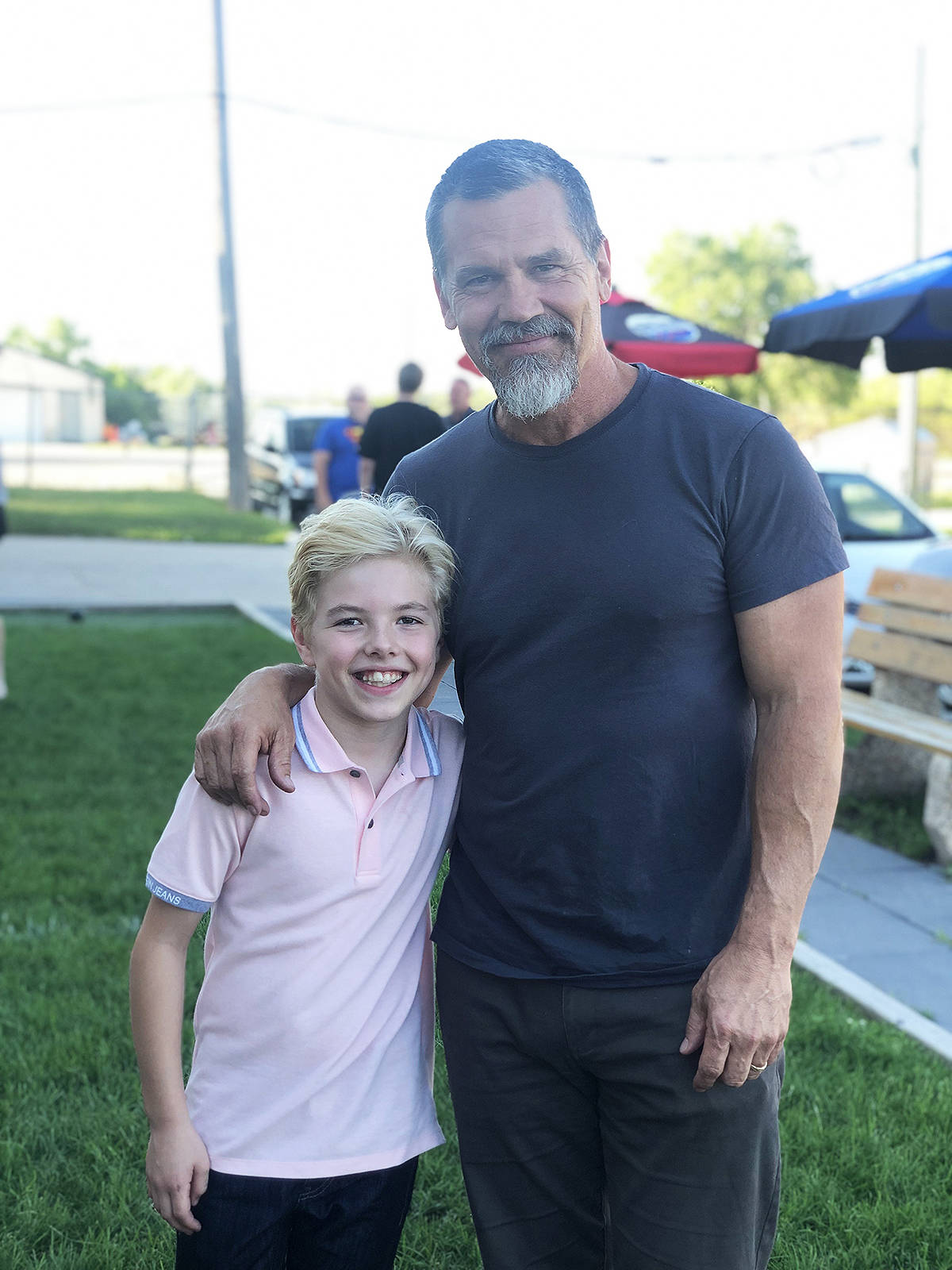 Beckam Crawford Skrypnyk stops for a photo with Josh Brolin on the set of “Flag Day.” (Photo: Submitted) 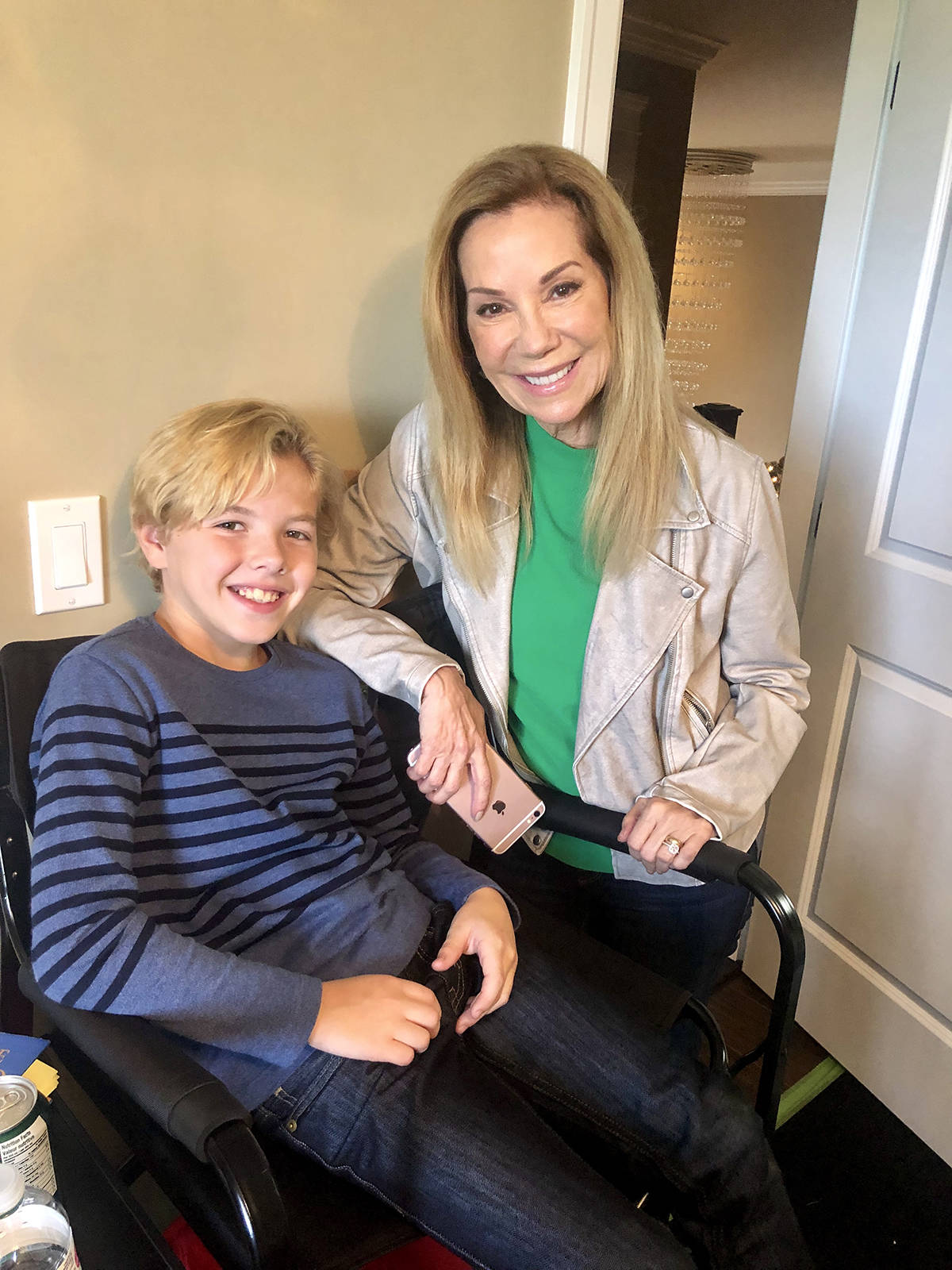 Beckam Crawford Skrypnyk pauses for a moment with Kathie Lee Gifford on the set of the 2019 Hallmark film “A Godwink Christmas: Meant for Love.” (Photo: Submitted) 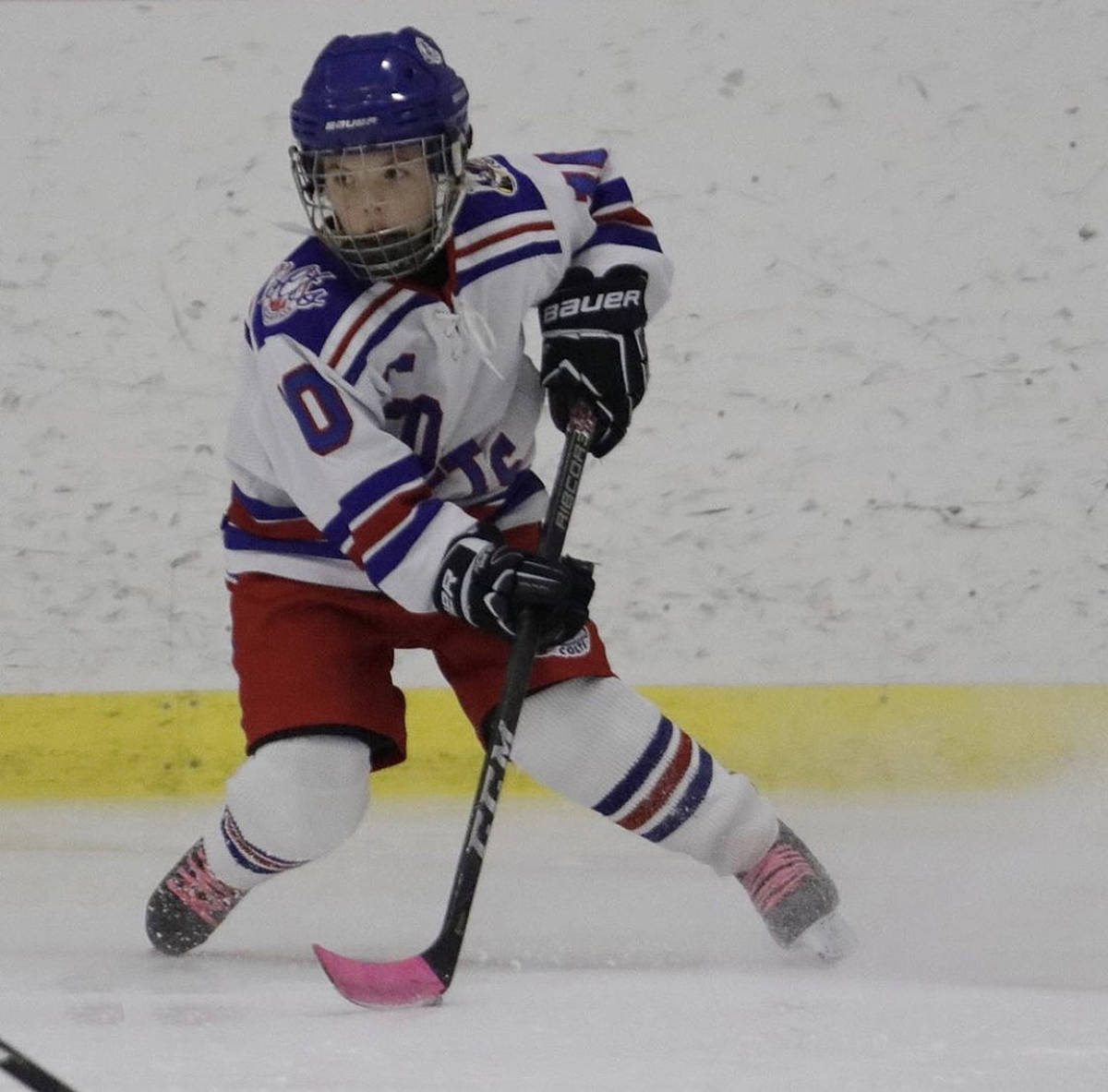 Beckam Crawford Skrypnyk is the only kid in his class with an Internet Movie Database profile. And he’s probably the only Grade 4 kid in Surrey with one too.

“I don’t know if anyone else is acting,” said Beckam, “but there’s a good chance that I’m the only actor in my school.”

The actor/hockey player/student from Fraser Heights just finished shooting his final winter scene in Winnipeg last week for the new Sean Penn film Flag Day. Now the Cloverdale minor hockey player is back in town for a few weeks of school before he sets off again to Phoenix to play in the prestigious President’s Day Invitational hockey tournament. His Cloverdale Colts will be competing in the U10 Elite division against teams from Alaska, Texas, Colorado, Georgia, California, and Arizona.

In 2019, Beckam spent seven summer weeks in Winnipeg filming scenes for Flag Day and he said the experience was thrilling.

Beckam Crawford Skrypnyk said it was great to be on set with #SeanPenn filming Flag Day. Go to https://t.co/kV3185uh94 to read a feature on Skrypnyk. pic.twitter.com/uXtb9yosgZ

“I got to meet so many people,” Beckam told the Cloverdale Reporter. “Sean was great. Everyone was just so good to me. It was a great experience, but sometimes it could get pretty tiring.”

Beckam said his filming days could be long days that stretched into the night, but that it was always exciting on set and Sean Penn was great with everyone—always joking around, having a good time, and making sure everyone was taken care of. “He’s just such a great director. He’s a really good actor. It was breathtaking when I got there. He just spoiled everyone.”

When Beckam filmed his first take, he said he was anxious. “But, as you stay with those people longer and longer, you don’t get nervous anymore.”

In Flag Day, Beckam plays a young Nick Vogel, the seven-year-old son of John Vogel (Penn). Penn directs and stars in the film alongside his children Hopper Penn and Dylan Penn. The film also stars Canadian actress Katheryn Winnick—known for her role as Lagertha in the popular Vikings series—and Josh Brolin.

Flag Day tells the story of conman John Vogel and his relationship with his children. It’s based on Jennifer Vogel’s 2005 memoir Flim-Flam Man: The True Story Of My Father’s Counterfeit Life.

After Flag Day’s summer shoot, Beckam was almost immediately cast in a Hallmark film with Kathie Lee Gifford called A Godwink Christmas: Meant for Love (2019). He shot with Kathie Lee for five days at various locations across Langley and Maple Ridge.

Somewhere in between Beckam managed to tryout and make Cloverdale’s Atom rep team in his first year (minor) in Atom. The Colts have four minor Atom players on the team and the rest are major (second-year) players.

Beckam said he’s really enjoying Colts hockey this year. “It’s amazing!” he exclaimed. “All my friends [on the team] are awesome, the coaches are amazing, and it’s just overall amazing.”

Because of the ice shortage in Cloverdale, Beckam hits the ice two mornings a week before school, both practices starting at 6:45 a.m.

Beckam also plays spring-league hockey for the Langley-based B.C. Lighting. The spring league runs April 1st to mid-June. He’ll be heading to West Edmonton Mall later this year with the Lightning to play in a tournament there.

Monica Skrypnyk, his mom, said he does have to keep up with schoolwork while he’s on set though.

“It’s whatever the teacher chooses to send to the on-set tutor,” explained Monica.

Beckam has to study for three hours while on set (as do all other school-age actors) and he has to study all subjects—even Phys Ed. “Sean even played tag with them on set and did other physical activities,” added Monica. She said Penn was great with all the kids on set.

Beckam has “tagging along” to thank for the nascence of his acting career.

“My sister, Isabella, wanted to get into acting, so I just went along with her to her interview.”

That interview was with Michelle Gauvin of Performers Management in Vancouver.

“Michelle thought it would be a good idea to sign Beckam up because he’s so outgoing,” explained Monica.

“Isabella quit, so I’m the only actor in the family now,” added Beckam.

After signing up, Beckam was booked for several commercials. His first of four films was Magic Stocking (2015). He followed that up with Hold the Dark (2018).

“Hold the Dark was a principal role,” said Monica. “He ended up going to New York for his costume and they built a dead body replica for him, which was really neat. It was seven hours of casting.”

Monica said Beckam was hooked from that point on.

“He loves it,” she said. “For a parent, there’s a lot of waiting around, but if a kid has a passion for it, give it a shot.”

Beckam said he’s excited about the prospect of seeing Flag Day in a theatre “with as many friends and family” members as he can muster to join him.

“I’m not nervous at all. (I’m) more excited to see it,” he said. “Especially being a true story and meeting Jennifer Vogel, and seeing all the work that’s gone into the filming.”

Despite rubbing elbows with Hollywood heavyweights, seeing his mug in numerous commercials, and playing rep hockey in his first year of Atom, Beckam remains very grounded.

“We really never know,” said Beckam, about landing another acting gig. “I (may) never book another role again.”

Monica, said she’s always reminding him of that. “We always say that to keep him humble.”

Life seems pretty good for the 10-year-old Cloverdale Colt, but when he looks down the road at what seems to be such a distant future right now, it’s not an Oscar that captures his dreams.

Flag Day will be released in theatres in late in 2020.

VIDEO: ‘Joy,’ ‘wonder,’ and ‘good times,’ to be had at Matilda production