Students at Langley Fine Arts School are preparing to put on a modern retelling of the Brothers Grimms’ Cinderella story with the upcoming production of The Ash Girl starting Tuesday, March 5.

The production follows the story of the Ash Girl, who must battle her inner sadness and negativity in order to find her inner hope and self confidence.

Characters Fairy and Sadness represent Ash Girl’s inner turmoil, and the two must battle to win over the Ash Girl while she fights the seven deadly sins in the forest.

“It’s a twisted tale. It has a darker side,” explained Lindsay Mitchell, Langley Fine Arts teacher and director.

“It does have a good message. We want everyone to find their inner voice and find true happiness. But it also allows for some great physicality for a lot of the characters. It pulls on a classic tale everybody knows. We’ve all heard the story of Cinderella, but this version tells it in a fresh and interesting way.”

In order to allow more students to have a chance to play various roles, many characters are double cast.

Since Langley Fine Arts school teaches elementary and secondary students, some of the cast members have been involved in theatre for many years like Grade 12 student Erica Zwissler who plays the Fairy character.

Zwissler said she enjoys the role because she relates to the character off stage.

“One of my best friends is the lead [Ash Girl], so I get to be the happiness in her. When she gets down, I uplift her in real life, so it’s really cool doing it on stage differently and I feel like we have that connection.”

Zwissler’s been in theatre for 10 years, and said she’s “so comfortable with everyone,” and called the school her “other home.”

Barnes added it’s an important show for other high school students to see because many of the scenes “hit home.”

“You get to be this magical person who brings light. There’s moments where the sins cower away from you, and it’s like you’re pushing away the darkness, and it really translates to real life, because you’re like ‘wow I really can have the power to push away the bad stuff.’”

Barnes moved to Langley from the United States almost two years ago, and said the other theatre students have welcomed her like a family member.

“This school has been so inviting and welcoming. They’ve made me feel like they’ve chosen me to be part of their family,” she added.

Grade 12 student Kaitlyn Zarin moved to Langley last year from Cloverdale, as she wanted to focus more on arts education.

“I love it here so much. The environment is so much different than other public schools, because everyone’s willing and committed,” she explained.

“I basically play Ash Girl’s mental state. I linger around and follow her and play the heaviness and dark side of her mental state. It’s very opposite of who I am as a person because I’m very outgoing. It’s fun to get to play the opposite, it’s like playing dress-up.”

According to Zarin, some of the challenges are to “really commit to being dark.”

“Sadness is a really interesting character going in because from the outside it seems like you’re just depression and you’re this nasty character, but it was cool finding sudden niches about the character and discovering what the motivation for him is,” Ryans elaborated.

Tickets and show times can be found online: https://www.brownpapertickets.com/event/4049748 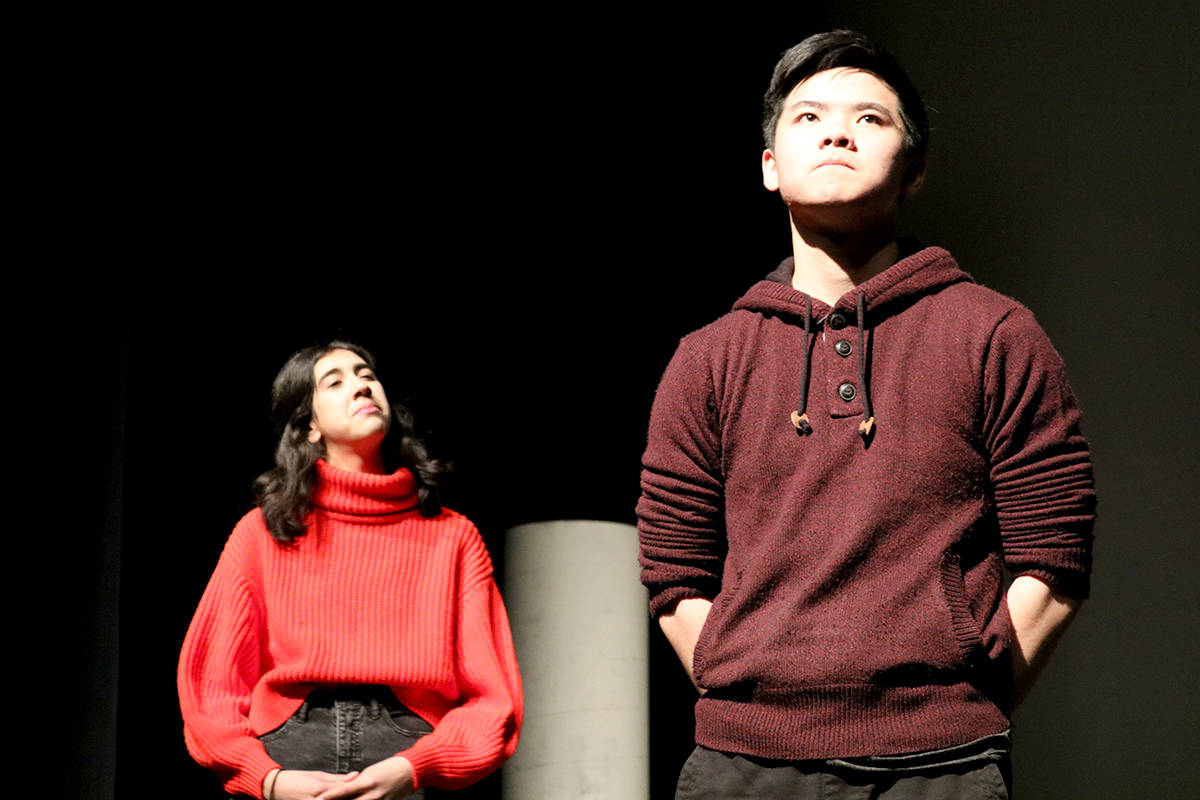