Even more than today, Langley used to be a community of communities.

Some of the names of those old places live on in rebuilt and rejuvenated neighbourhoods – like Willoughby and Walnut Grove – that are not remotely similar to the small collections of homes and farms that gave birth to them.

Some, like Milner and Fernridge, have simply continued, while others, like Lochiel and Harmsworth, remain as little more than names on old maps.

The construction of the freeway in the early 1960s created a geographic division that relegated a number of Langley’s communities to obscurity.

Sperling, north of the freeway at about 240th Street, was once a thriving community within Langley.

Like others, it had its own elementary school, a community hall, and a corner store at the business centre.

That corner store was operated by Art and Dorothy Woolley, as detailed by their son Marv in a recent edition of the Langley Heritage Society newsletter.

The Woolleys, like other store owners of the time, were integral members of the community. Sometimes, area residents were able to survive only through the magnanimous extension of credit Woolleys offered during hard times.

“Dad… extended credit to local farmers and fishermen, hoping to settle the account at the end of each season,” said Marv Woolley, who now lives in Chilliwack but continues to volunteer on heritage matters in Fort Langley from time to time.

“Although many customers were not able to settle their debt by the time the store closed,” Marv said, “one family kept a record of their account and paid in full many years later.”

One year – Marv figures it was in the mid-1950s – Christmas brought out his entrepreneurial spirit.

“I got permission from Mom and Dad to sell Christmas trees in front of the store,” he related.

“An area of forest logged some years earlier was restoring itself with a variety of fir, pine, and hemlock. On my way home from delivering papers, I would cut two trees and carry one on each handle bar of my reliable ‘all speed’ CCM bicycle (‘all speed’ means no gears!). My biggest tree was a straight, not so bushy, seven-foot-tall fir. When a potential customer asked, ‘How much?’ I bravely forced out, ‘Seventy-five cents, please.’”

One of his paper route customers made a special order for a hemlock Christmas tree.

“I accepted the challenge to find the perfect tree,” Marv recounted, “but I was wondering how the thin branches could support decorations.”

The day after he delivered the tree, he saw it hanging upside down from the ceiling, “an old European tradition.”

“They had given me one whole dollar for that small tree,” said Marv, “and I rode home imagining what I could buy Mom for Christmas with all that money!”

Sperling was a flag stop on the BC Electric rail line, Marv noted, “which meant that neither the tram nor the train would stop unless a red flag was placed on the platform… to indicate that passengers or freight was waiting.”

Mailbags were tossed onto the platform as the train went by. “Mom would pick up the mailbags and take them to a little alcove in the northeast corner of the store, known as the Sperling station post office, to sort and hold the mail in small wooden slots for every family in our community,” Marv wrote in the LHS newsletter.

The desk she used for the mail is now at the Centennial Museum in Fort Langley.

Marv’s sister Elaine remembers how much more mail there was at Christmas, not just for the community, but for the family.

“Of course there always was more mail at Christmas,” she said, “and for us, overseas letters and post cards from the Woolleys still living in England.”

The Woolleys’ boxes, along with more from Art’s sister Irene Stevenson – who had a meat market and store at 232nd Street and Fraser Highway – went to aunts and uncles in England.

The youngsters must have been expert packers.

“The boxes were opened at the post office in England to view the contents,” said Elaine, “and Auntie told us the post office could never get the supplies back into the original box.”

Marv Woolley shares memories of living at the Sperling General Store & Post Office, once located beside the BC Electric Railway tracks at Brown Road and 72nd Ave.

His parents Art and Dorothy bought the store in 1945, the year Marv was born. The store was closed in 1962 when the new 401 Highway cut it off from a large part of the community.

People lived in the building for another 10 years before it was burned down as a practice for Fort Langley’s volunteer fire department in 1973.

Built around 1905, Sperling General Store & Post Office was a vital part of community life for decades.

Mom was the postmaster and they both operated the store, Mom taking orders by phone, then Dad delivering the groceries and hardware through North Langley until the 401 freeway forced the closure of the store in 1962.

Langley’s Heritage – A Listing of Heritage Resources, published in 1995, notes, “Much of the surrounding community survived the Depression due to Berry’s generous extension of credit.”

Dad certainly followed Mr. Berry’s generous example, and extended credit to local farmers and fishermen, hoping to settle the account at the end of each season. Although many customers were not able to settle their debt by the time the store closed, one family kept a record of their account and paid in full many years later.

The mail would arrive in heavy sealed canvas bags thrown onto the platform of the Sperling Station from the Interurban tram. Sperling was a flag station, which meant neither the tram nor the BC Electric train would stop unless a red flag was placed on the platform to indicate passengers or freight was waiting.

Mom would pick up the mailbags and take them to a little alcove in the northeast corner of the store, known as the Sperling Station Post Office, to sort and hold the mail for every family in our community. She used a very tall desk that I could walk under without hitting my head. That desk and other artifacts were donated to the Centennial Museum in Fort Langley.

The store came with an ESSO dealership, with one old original gas pump that was operated by hand. The pump was located very close to the building, and the motor oil, kerosene, and barrels of other flammable products were stored against the wall just outside our living room, under an open porch-like structure. We could look out the front window to see someone dropping by for gas or groceries.

Barrels would have taps or valves placed in the top, and were tipped onto a built-in bench. Motor oil was dispensed into one-quart glass bottles for re-sale, and the kerosene was measured and poured into customers’ containers – no waste, and no disposable containers. However, the wood surface supporting the barrels was soaked and preserved with the oils, giving it a unique colour and odour.

A replacement “modern” gas pump was located at the northwest corner of the store, still very close to the main building and adjacent lane.

As people entered the store, a bell announcing their arrival could be heard from from any location in the building – handy for the person tending the store, but annoying for a teen trying to sleep in.

The door had a thumb latch and handle and was covered with decals advertising tea, coffee, and pop. A window in the top third of the door would often shake loose and rattle, and the aging tongue and groove wood floor would complain with the first step taken inside.

The National Cash Register was ornate with cast and polished scrolls on every surface. It had a distinct “ka-ching” when the cash drawer opened. While cleaning the old till years after the store had closed, I realized the cash drawer wasn’t opening smoothly or rolling all the way out. It was an Old Age Pension cheque that had been cashed for Mr. Cripps.

I think Mom was serious when she said, “Why, Revenue Canada will be wondering why Mr. Cripps never cashed his cheque.” She mailed it in, explaining the many years of delay, and she actually received a response along with a cheque for the full amount of $12.85.

Our grandchildren are delighted when the old cash drawer rolls out with a ka-ching.

The candlestick phone was connected to a party line used by a number of neighbours. Each phone on the line had a unique ring controlled by the BC Telephone operator. When we heard a short ring then a long ring, we knew the Dahls had received a call. If we picked up our phone – gently – we could listen in.

The store was two short rings, and the neighbours would know who the call was for, particularly on order day. Customers would phone with a list, and would be ready to alter their requests, based on what meat, fresh fruit, or dairy products were available.

There would be weeks with blocks of cheddar cheese or an aged side of beef or pork from Mr. Datwiler’s “meat market on wheels.” Dad cut the meat on a special board placed on top of the freezer chest.

Delivery day was Saturday. I got to go along sometimes. Orders were placed in cardboard boxes with family names written with a marker pen.

Dad carried the orders on his shoulder right to the kitchen of each home. It seemed to me he was checking in to see how the families or old bachelors were doing this week. Over the years, he found an elderly man who had passed away in his bed, and another who had taken his own life with his hunting rifle.

Little kids would greet him with excitement, as though he was Santa Claus, however they were actually hoping that their mother had ordered a special treat this week, perhaps because they had heard their dad or uncle say the fishing had been good this week. 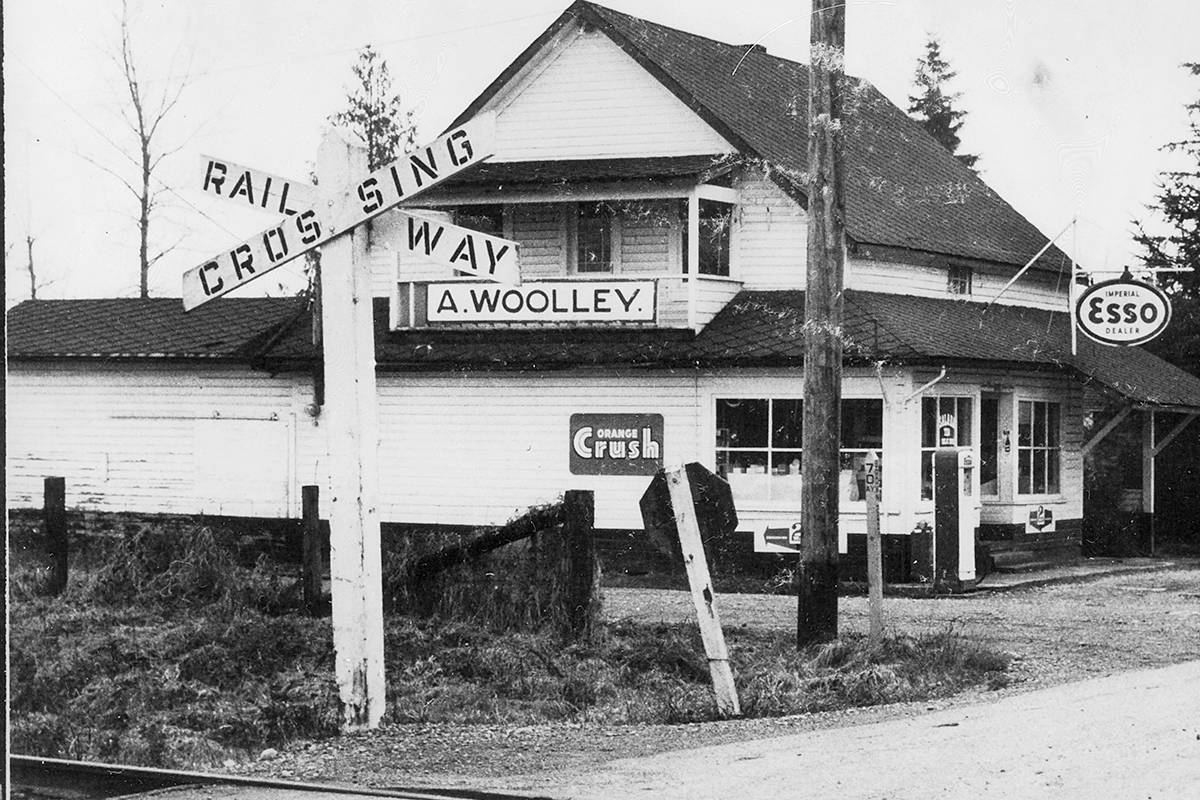 The Sperling General Store operated on 240th Street (Brown Road) until 1962, when the freeway was pushed through and forced its closure. (Langley Centennial Museum & Archives)

MADE WITH LOVE: Cloverdale-Langley City MP Aldag gets heating, beating, and eating