On April 13, Jenna Mason and her one-month-old son Kasper stepped out of their house on Track Street for a walk on a bluebird day in Revelstoke.

Mason said Kasper was more fussy than usual that morning but thought it was just gas. The infant cried as they left the house as he usually did.

Then, the young boy stopped crying. Mason said she stepped to the front of the stroller to check on her baby.

What happened next was every mother’s worst fear. Kasper wasn’t breathing. His face was turning blue.

Mason said she lifted her baby out of the carrier and whipped her head around to find help.

“My baby’s not breathing!” she called out. Two other women were also walking in the area, saw the mother and her small infant, and immediately rushed to Mason’s side to see what was wrong. They comforted Mason as they tried to assess the situation.

Meanwhile, Devon Jones was working on a property just down the road from Mason’s house. He said he heard cries for help and ran over to find out what the commotion was.

As he approached the scene, Jones said he remembered thinking: “This can’t be real”

“Somethings happening to my baby, I don’t know what’s wrong,” he recalled Mason crying out.

Jones snapped into action. He laid little Kasper on the ground and immediately started performing CPR. He had just upgraded his first-aid certification a week prior, so the procedure was fresh in his mind.

Moments later, paramedics were on the scene. Kasper was still not breathing and didn’t have a pulse. First-responders loaded the mother and infant into the ambulance and immediately started working to save the child’s life. Mason sat shocked in the passenger seat. The thought that she might lose her child passed through her mind.

“We have a heartbeat,” shouted the paramedic from the back of the ambulance.

When the ambulance arrived at the hospital, little Kasper was breathing again. As he was rushed into the hospital, Mason and her baby were surrounded by a buzz of nurses, doctors and first responders.

Kasper was stabilized at Queen Victoria Hospital in Revelstoke, but it was determined that he would need more care elsewhere. Mother and son were airlifted by jet to the BC Children’s Hospital in Vancouver.

Mason said doctors were quite concerned by the event, and she and Kasper stayed at the BC Children’s Hospital for a month as tests were performed and the baby was monitored.

“The CPR was key to saving the baby’s life,” said Julie Lowes, Clinical Operations Manager at Queen Victoria Hospital. She added that time is of the essence in situations of cardiac arrest, no matter the age of the patient.

Mason and her now three-month-old baby boy are back home, happy and healthy.

Mason has since reached out to Jones, the two women Kirsten, and Lindsay, as well as the first responders to offer her gratitude for saving Kasper’s life.

The mother is hoping the public can learn the importance of knowing CPR from Kasper’s harrowing story.

“If he hadn’t been there, I’d hate to think of what the outcome would have been,” said Mason about Jones. “You don’t expect something like that would happen to you, but it can.”

When called a hero, Jones humbly just laughed and shrugged it off.

Lowes stressed the importance of the life-saving procedure, and that the ability to perform CPR until first-responders can arrive on the scene is critical in helping in saving lives.

Interior Health urges people to learn the essential four-key-steps to remember when someone is in need of CPR, and offered resources to get formally trained in First Aid and CPR: 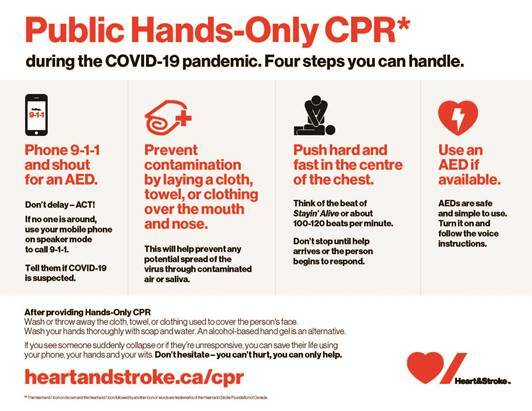 The four steps for CPR. (Heart and Stroke Canada)

The Mason family express their gratitude to everyone that played a role in Kasper’s recovery, including Jones, the two women who assisted her at the scene, first responders, the team at Queen Victoria Hospital, the air ambulance service, and the staff at BC Children’s Hospital.

19 B.C. municipal officers under investigation for misconduct during undercover training