Eric Woodward, the Fort Langley developer who withdrew three projects because of a deadlock with Langley Township, is looking at the other Langley as a potential alternative.

In response to a Langley Times query, Woodward said he has put out some “feelers” about “the possibility of looking at some options in Langley City.”

Woodward said he would like to build a mixed-use project, one like his cancelled proposal to construct a small boutique hotel as part of a three-storey mix of residential and business space on a 1.39 acre site at Glover Road and Mary Avenue.

“I do prefer mixed-used projects because they really are what I know best, and can have (a) great impact for the community when done well, and in the right location,” Woodward said.

Woodward said mixed-use sites are a “rarity” and indicated an additional consideration is the presence of the Cascades Casino Hotel and Convention Centre in Langley City.

“Pursuing a boutique hotel idea would depend very much on the specific location, given the dominance of Cascades there. It takes time to find sites for sale, and with good potential,” Woodward said.

Langley City mayor Ted Schaffer said he hasn’t made a formal approach, but when he’s seen Woodward at community events, he has promoted the City as a possible site for future projects.

“I’ve said, why don’t you take a look at doing something in the City?,” Schaffer told The Times.

Schaffer said he had no comment to make on the impasse between Woodward and the Township.

“I’m not a negative person. If I can guide someone in a direction, that’s my job.”

The confirmation that Woodward was looking at the City as possible option comes after an recent public online exchange between the mayor and the builder on Facebook, where Woodward mentioned a television report about the City’s ability to approve a development permit in 10 weeks.

READ MORE: Langley City is in the middle of a building boom

“Definitely an interesting contrast with the Township of Langley, currently,” Woodward wrote.

Schaffer responded by inviting Woodward to attend an upcoming Urban Development Institute event as his guest.

“You are more than welcome to be my guest where you will get the straight goods from those that are in the industry,” Schaffer posted.

“I would love to attend. I always learn something new at these events,” Woodward wrote.

Last fall, Woodward began boarding up some buildings in Fort Langley after he reached an impasse with the Township over several proposed development projects he had planned for the village, including the boutique hotel.

It was almost two years since the proposal was first unveiled, and about a year-and-a-half since the application was filed.

Township planning and transportation staff are insisting on a lane that would run through the middle of the planned courtyard plaza and performance space and force its removal, Woodward said.

Woodward earlier withdrew applications for two other projects in Fort Langley, one for a small building, writing the Township in November to advise it would not be proceeding, and one for a larger project on the other side of Glover Road, where the formal letter was sent in December.

In both cases, Woodward said unreasonable demands for modifications were being made by Township staff.

In an online posting announcing the withdrawal, Wood said the combined value of the three projects was $65 million.

He said some of the buildings on the sites were “already well past their reasonable lives (and) without any prospect of eventual replacement, there is now little basis left to continue subsidizing most of these older buildings on Glover Road that require new roofs, new mechanical, new electrical, new plumbing, and have numerous structural and drainage problems.”

Last year, Woodward had a house on the Mary Avenue site painted bright pink to bring attention to his standoff with the Township of Langley over its demolition.

The Township, he said, was refusing to issue a permit for the demolition of the house and several other soon-to-be vacated buildings on the 1.39 acre site at Glover Road and Mary Avenue unless he met several conditions that he considered unreasonable.

“Hopefully, at some point he wants to develop it and work with the Township and we’re happy to work with him,” Froese said.

In March, Coun. Kim Richter made a motion to have Woodward come to council to present his concerns to them, but the proposal was voted down in a 6-2 decision.

Woodward told the Times he has no plans to sell the properties and expects it will be “at least five to 10 years” before he tries again to develop them.

READ MORE: Eric Woodward shares his side of the story at public information session (video)

Woodward recently held a public forum to discus the stand-off.

Hundreds of people packed the Chief Sepass theatre in Fort Langley Woodward take questions from host Fiona Forbes and members in the audience, inclduing why he boarded up buildings in Fort Langley’s commercial core, why his boutique hotel proposal was withdrawn and why he feels he’s at a stalemate with the Township of Langley.

An overflow room was set up in the lobby of the theatre with a screen live streaming the event for those who did not have tickets. 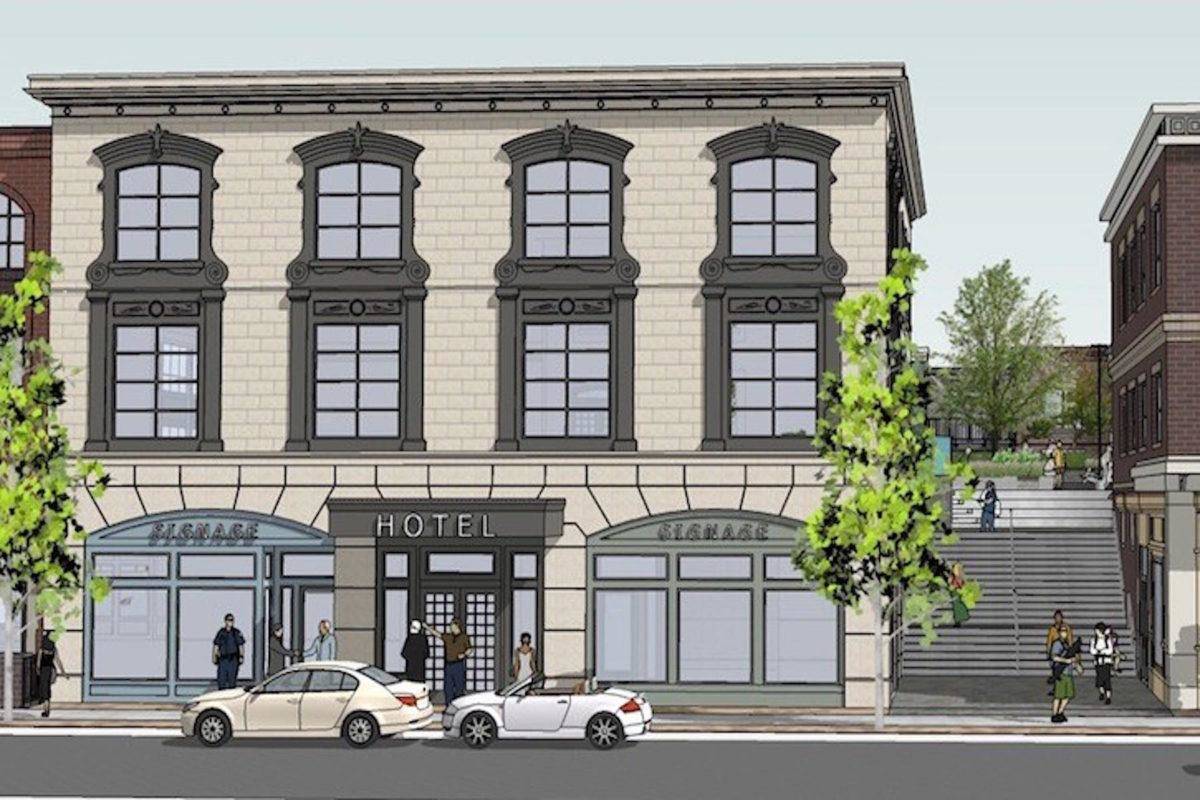