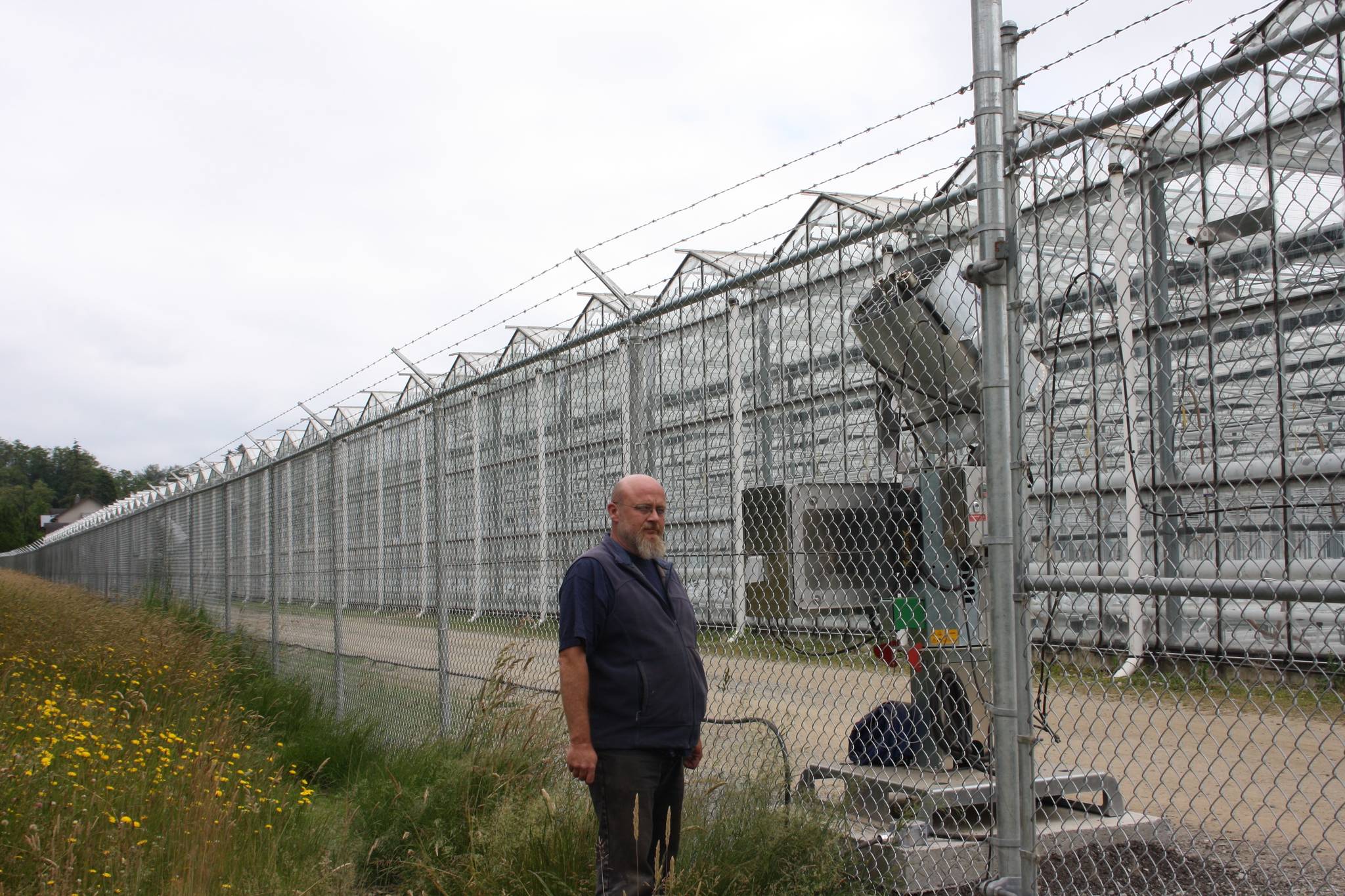 Steve Driese stands next to one of the ‘misting cannons’ at the Canopy Growth operation. He maintains that the machine does nothing to help mask the smell of the farm and the noise of the equipment is intolerable. Tim Collins Black Press

The smoke has cleared on the issue of marijuana legalization now that the federal Liberal government has followed through on one of the biggest and most controversial campaign promises.

With the adoption of Bill C-45, recreational marijuana will officially become legal in Canada on Oct. 17, 2018.

But for a group of residents in Aldergrove, the main issue regarding the legalization of marijuana has nothing to do with the usual debating points. It’s the odour marijuana produces as it is cultivated.

That’s because one of the largest marijuana grow operations in the country, Canopy Growth, is located right in their backyard in a 30 acre greenhouse complex where, until recently, peppers were grown.

According to Michelle Nicholls, the smell of the new crops has had a severe impact on the neighbours’ ability to enjoy their homes.

“We have formed a community group and we’re not exactly fighting (the producers) but we are looking for stricter regulations to deal with the odour,” said Nicholls.

“This is about quality of life in our neighbourhood. I don’t mind the occasional odour… you expect that in a farming community, but this is 24 hours a day.

“It varies a little bit but we’ve had to go inside in 30 degree weather and close all the windows because the smell is just so atrocious.”

It’s not the first issue the neighbours have had to contend since the establishment of the pot farm earlier this year.

“The first thing that hit us was the lights they had on all the time for their crop. It was like we were living on the Vegas Strip. We complained and they did take some action to address that issue, but they haven’t been able to do anything meaningful about the smell,” said Ronald Leeper, whose home is only about a block from the Canopy Growth operation.

“When they open up the roof vents there on a hot day, it’s unbearable.”

Jordan Sinclair, the vice president for Canopy Growth, responded to questions regarding the citizen complaints by saying that the company is working to address the neighbours’ concerns.

“We acted very quickly on the question of the lights and now we are having to deal with the odour mitigation. We acknowledge that we need to find a solution to that and have already taken some steps to address the issue,” said Sinclair. “We’ve brought in some equipment already and are continuing to deal with the issue.”

The equipment to which Sinclair referred were what residents have dubbed misting cannons. The equipment releases a fine, scented mist which is then dispersed by high powered fans.

But that approach has caused its own problems.

“First of all, the cannons do nothing to improve the smell. We used to have this foul, rotting sort of smell from the cannabis.

“Now we have the smell of rotting meat with an added mist of something that smells like fabric softener,” said Steve Driese, whose home is within a few hundred metres of the farm.

“And not only do the misters not help the smell, now we have to put up with the constant noise of the fans and generators. It’s like living next to a railyard.”

The noise is an issue for all of the nearby neighbours and Leeper claims to have measured the sound at 76 decibels.

An upright vacuum cleaner operates at about 75 decibels and 85 decibels is considered loud enough to cause hearing damage.

Township of Langley council has heard the concerns of the residents, and is responding.

They have passed a resolution to write to the appropriate government agencies expressing their concern, but as Coun. Charlie Fox points out, the issues regrading the operation are not within their jurisdiction.

“In the end, I’m not anti-marijuana but the industry should have to adhere to some best practices regarding things like lights, odour and noise,” said Fox.

“The problem is that this is such a new industry that there are no ‘best practice’ regulations or guidelines in place.

“For mushroom farms, those standards exist and require charcoal filters and scrubbers. For marijuana, we’re not there yet.”

“The regulation of these operations falls under the provincial regulations, but Canopy Growth has the approval of the province to operate this greenhouse located on ALR land,”said Mayor Jack Froese.

“And, although we obviously have an advocacy role to help address the concerns of the neighbours, we also have a role on the other side of the equation.

“This is a legal and valuable industry in our community and there are economic and employment considerations that have to be taken into account.”

For its part, Canopy Growth said it is committed to continuing its efforts to address the issues arising from its operation in Aldergrove.

“We can’t enjoy our homes anymore, and what we need is for Canopy to be better neighbours,” said Nicholls. “I really hope they do.” 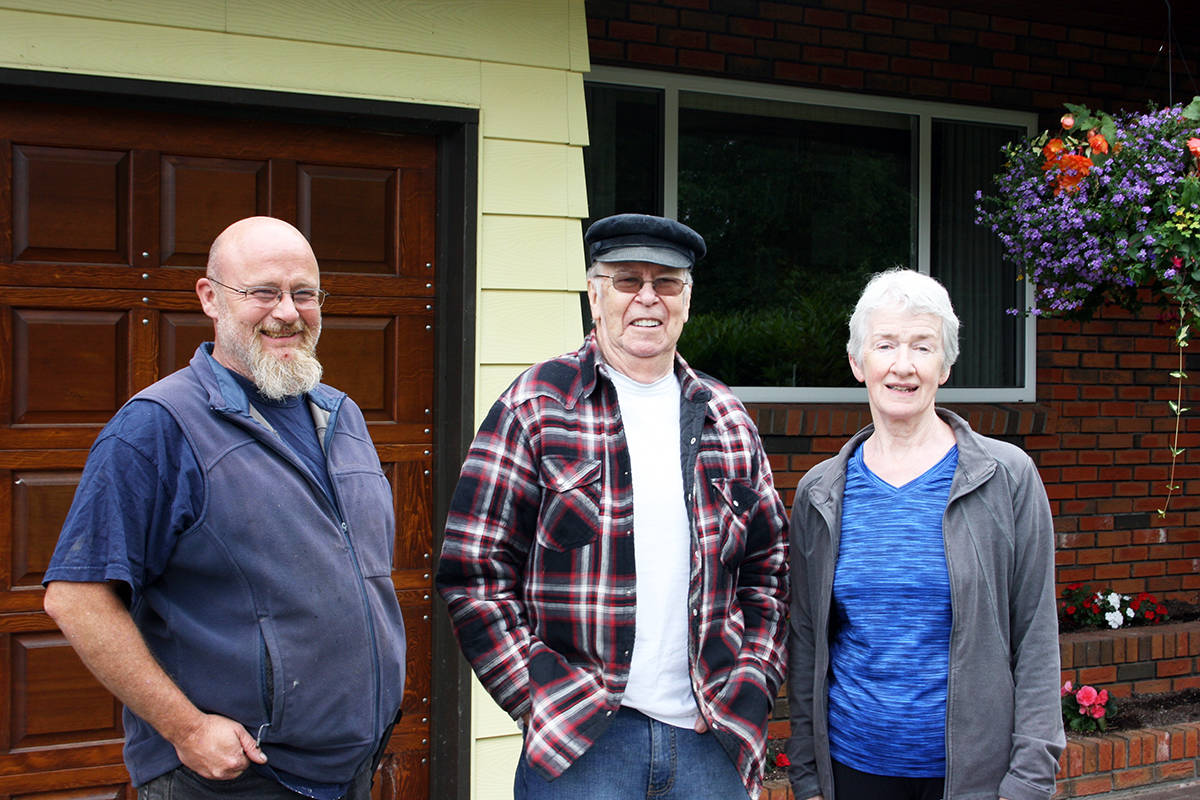 Steve Droese (left) and Mr. and Mrs. Nicholls are part of the neighbourhood group that has complained about the impact of having a 30 acre marijuana farm next to their homes. Tim Collins Black Press