It’s something Aldergrove parents and students have feared for years. And it happened last week despite desperate pleas to Langley Township, to address an “unsafe” crosswalk near an elementary school.

At around 8:20 a.m. on Feb. 10 the mother of a Shortreed student (who wishes to remain anonymous) was walking with her daughter to school when she was run down by a vehicle in the crosswalk on the south leg of 272nd Street, at 28th Avenue.

“After ensuring it was safe, and waiting for vehicles to stop,” the pair had proceeded to cross, the mother reported to Langley RCMP. It was then that a motorist turned onto the crossing from 28th Avenue.

The mother “pulled her daughter” out of harm’s way, taking the blunt force of the vehicle to her side.

“My daughter cried instantly,” the mom recalled. The young student feared the worst had happened.

On Tuesday, the victim said the crossing “is a huge problem area for pedestrians and asks the Township to make changes “before someone has to write sorrow for a loved one.”

The incident came as no surprise to an Aldergrove mother and student who have advocated for changes to the crossing as early as two years ago.

For as long as mother Cashmere Roder – a member of the school’s PAC – can remember, parents have expressed concerns to the Township about the crosswalk.

Roder pressed the Township about the matter in October, and was told that its staff conducted inventory on the motorists making turns at the crossway and noted “no observances of conflicts between pedestrians and vehicles,” Township traffic technologist Erik Berg said.

As such, the intersection has not been converted into a traffic signal.

Currently, overhead crosswalk flashers and in-pavement flashers warn motorists of potential pedestrians crossing 272nd Street at the crossing. The upgrades were put in place in 2007 as an addition to the original four-way intersection, according to the Township.

Though Roder worries that drivers passing assume the yellow lights ask motorists to use caution, and not for a complete stop as families and children attempt to cross the busy street.

When activated by the press of a button, the crosswalk announces: “Amber pedestrian lights are now flashing, proceed with caution. Vehicles may not stop.”

In May, Roder told the Aldergrove Star “we don’t want to have to wait until an emergency happens, for something to be done.” As of Feb. 12, the recent victim was not able to sit, Roder said.

Ten-year-old Shortreed student, Mya Grainger, was heartbroken after hearing that a mother was harmed last week.

Grainger picketed at the crosswalk in June, asking the Township for a stop light to be installed to keep her and her classmates safe.

“There are a lot of kids from my school who are terrified of this crosswalk,” Grainger said.

Roder and Grainger have joined forces to push the Township to prevent further conflicts between motorists and pedestrians at the crossing, just a few blocks from school.

Labelle suggests Aldergrove residents report to police license plates that do not stop for pedestrians.

Township staff has since conducted a cost analysis for implementing added safety measures at the crossing, prompted by Aldergrove councillor Bob Long.

As 2020 budget talks are finalizing, the project has been flagged. Residents can now vote on the Township’s capital budget questionnaire for a $250,000 a pedestrian signal installation at the intersection.

The form can be accessed online here. Feedback at tolbudget@tol.ca is considered until March 3. 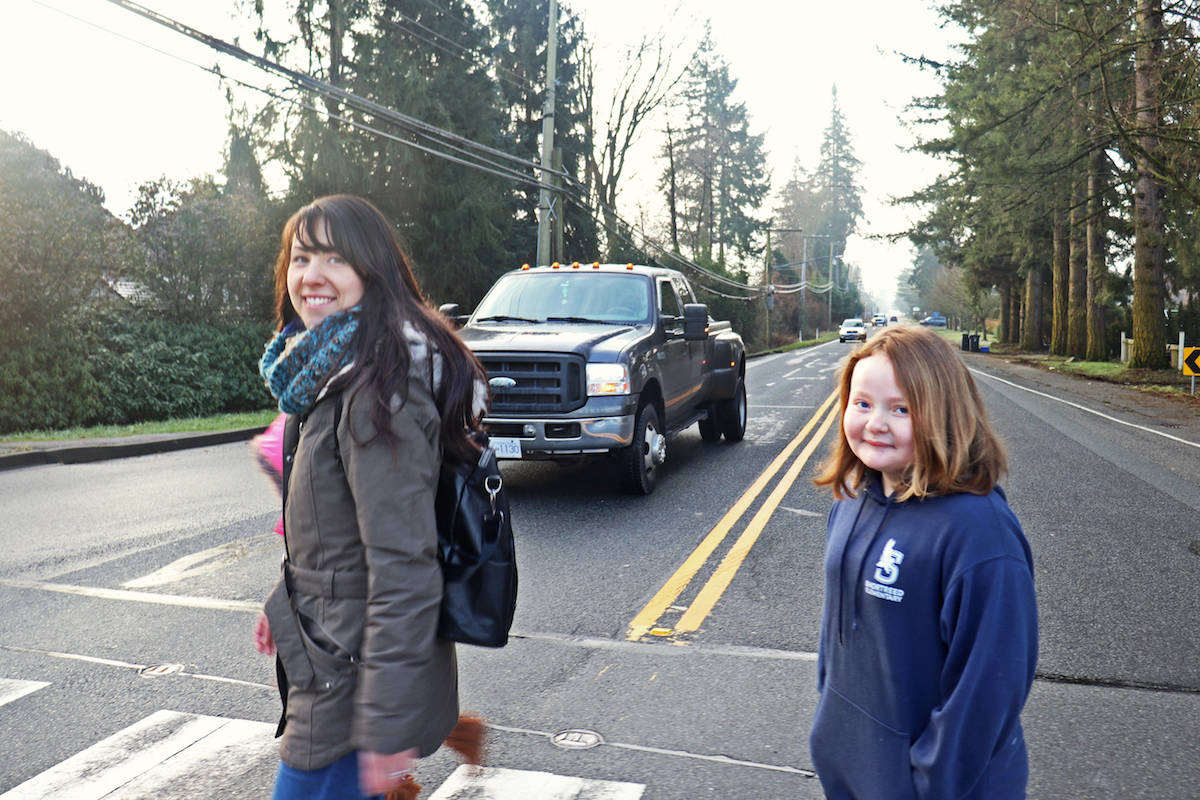