A sparkling new space for non-profit groups and other community initiatives has popped up downtown this month.

Aldergrove Fair committee executive director, and long-time Langley volunteer, Karen Long, followed her passion for her community to see a new resource centre open up at 27030A Fraser Highway.

The Aldergrove Resource Centre (ARC) with a tagline that reads “the heart of the community,” is a joint venture between the Aldergrove Business Association (ABA), led by president Jodi Steeves and the Fair Committee.

Both organizations have stepped forward to sign a month-to-month lease with the Township of Langley for the corner unit, which will also be used by other nonprofits to provide services to people in the community.

As early as Thursday, Langley Community Services Society (LCSS) signed on to use the space as their first official office, ever, in Aldergrove.

“We’ve been trying to get into Aldergrove for a long time,” LCSS executive director Sanjeev Nand told the Aldergrove Star.

“We’re so excited that we’re finally here and so happy that we can contribute,” Nand added.

The ARC will provide a space where locals can receive free counselling, legal, employment, substance use, immigrant, youth and other programs and services at the office – instead of making the commute further into Langley.

“It’s all about visibility,” Long explained. She predicts the ARC’s establishment has come at the right time, with the slow but steady revitalization of Aldergrove’s downtown core.

ARC opened its doors on Saturday, the day of Langley Good Times Cruise-In.

Long stationed the Aldergrove Fair mascot, Aldy, on a median outside the building and young show-goers enjoyed photo ops with the child-sized doll.

“It’s working already,” Long told the Aldergrove Star during the Cruise-In, reporting three new businesses that either renewed their ABA membership or joined new over the course of the day.

Bags to Bedzzz, which weaves recycled plastic bags into mats for the homeless, the Langley Volunteer Bureau and Aldergrove Youth Soccer have all signed on to share the space.

Long is expecting another handful of organizations to join in the coming weeks.

On Thursday (Sept. 19) the ARC will host an open house at 7 p.m. for the community to indulge in wine and Boston Pizza appetizers while learning more about what the space, and their community, has to offer. 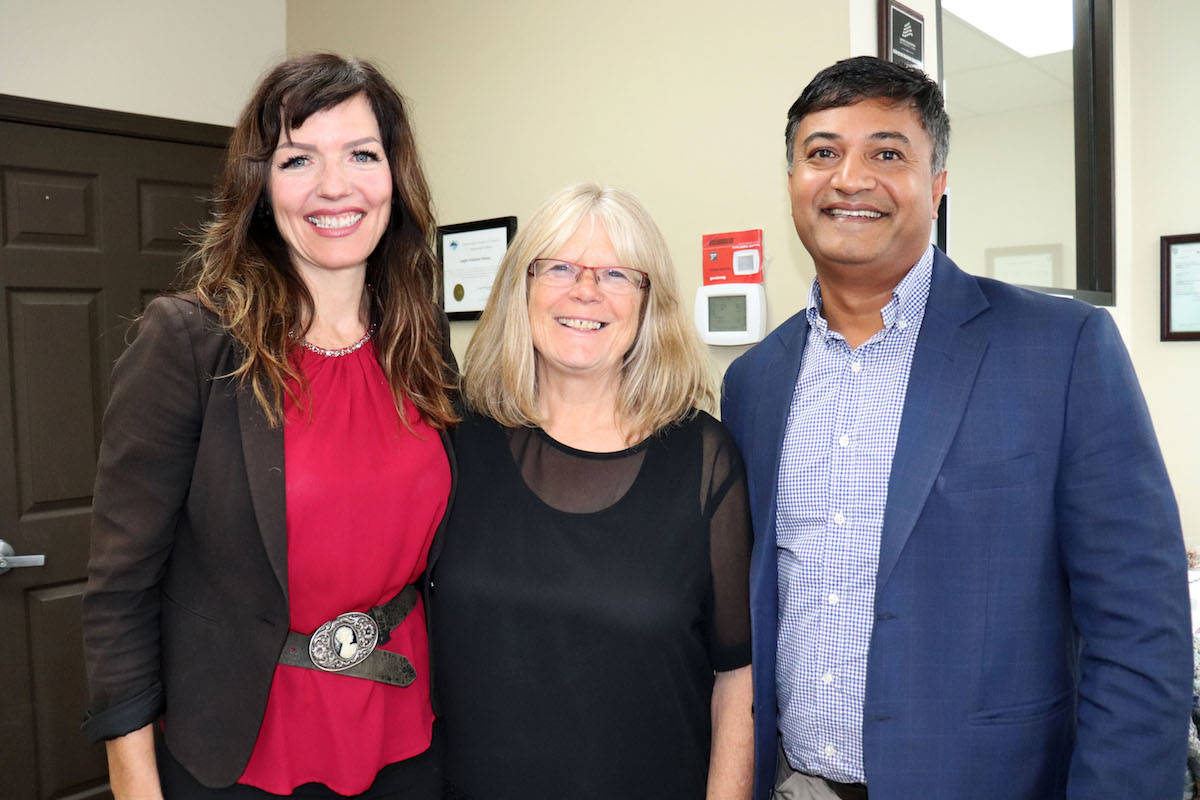 ABA president Jodi Steeves (middle) and Fair exec. director Karen Long (middle) have partnered to run the centre, which will be used by Langley Community Services Society as well as its exec. director Sanjeev Nand (right).

35 of 87 dogs in 2018 Williams Lake seizure were euthanized, BC SPCA confirm

Late hockey player to be remembered forever with jersey retirement