It’s been nearly two years in the making, but the $25.5-million widening project that Highway 13 underwent from from Zero Avenue to 8th Avenue, is finally finished.

It was in July 2018 that shovels first hit the ground by Langley’s Tybo Contracting – who secured the contract with $10 million being funded by the federal government.

Formerly, the Aldergrove-Lynden border crossing had only two lanes for through traffic.

Since then, construction crews could be seen during all hours on the Aldergrove roadway leading to the U.S.

Now, two lanes take motorists north and three south – including a new truck lane, a lane for slower-moving commercial vehicles, and a lane which will in the future become a Nexus queue.

The drive down to Lynden will no longer be wrought with construction.

“These improvements are already helping local traffic and commercial vehicles,” said a B.C. Ministry of Transportation and Infrastructure statement.

A new southbound left turn on 0 Avenue will provide Aldergrove residents with better access to the border and in turn, “improve traffic on local roads.”

An estimated 6,000 vehicles use this section of highway each day during peak summer season, the Ministry said, making note of current travel restrictions due to COVID-19.

“The additional lanes on Highway 13 will shorten southbound queues during peak travel times.”

Other parts of the newly completed project include a 3B Avenue east-west connection between Highway 13 and 264th Street, with a traffic signal at Highway 13.

The Aldergrove-Lynden crossing on Highway 13 is one of five Canada-U.S. border crossings in the Lower Mainland.

The $25.5-million Highway 13 widening project was cost-shared by the federal and provincial government.

Full details on the project, as it was proposed to the public, can be found here. 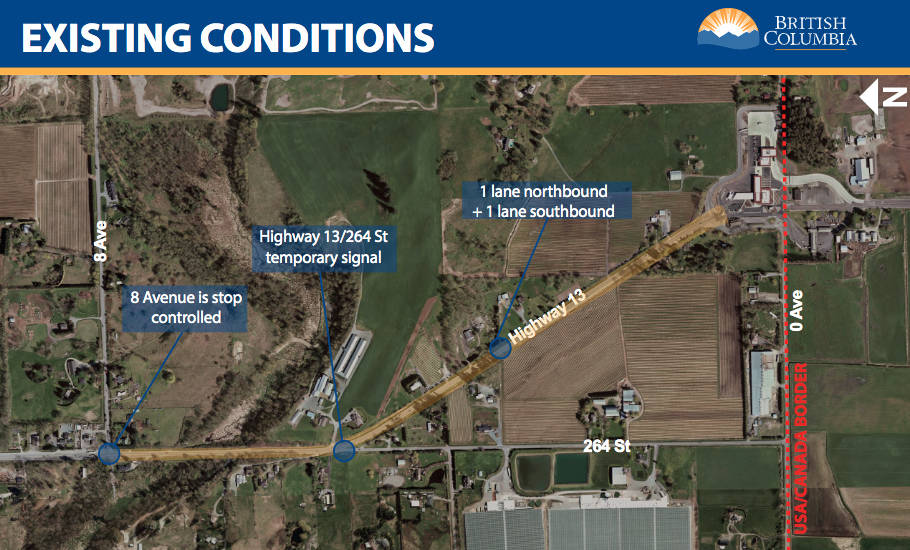