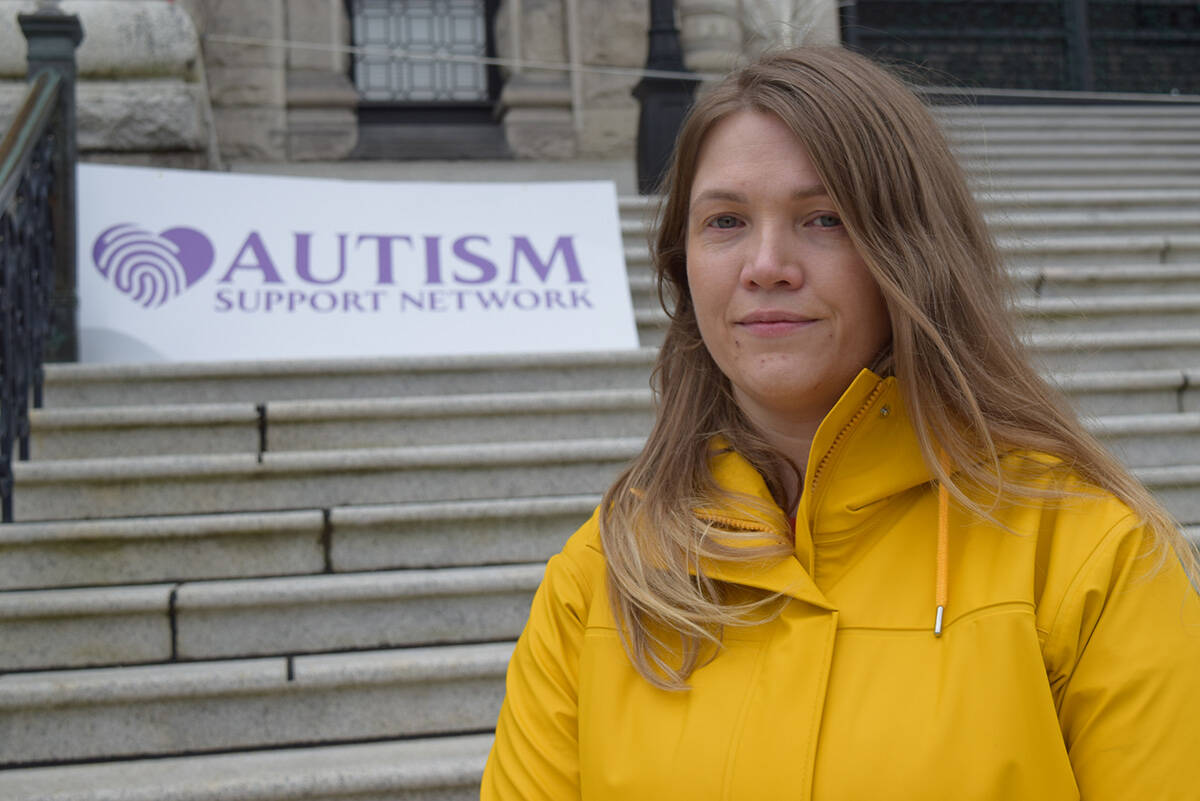 Jaclyn Spittle, a parent of a child with autism, said the province’s decision to move to a hub model of care would “rip away” the supports that have made her son self-reliant. (Kiernan Green/News Staff) 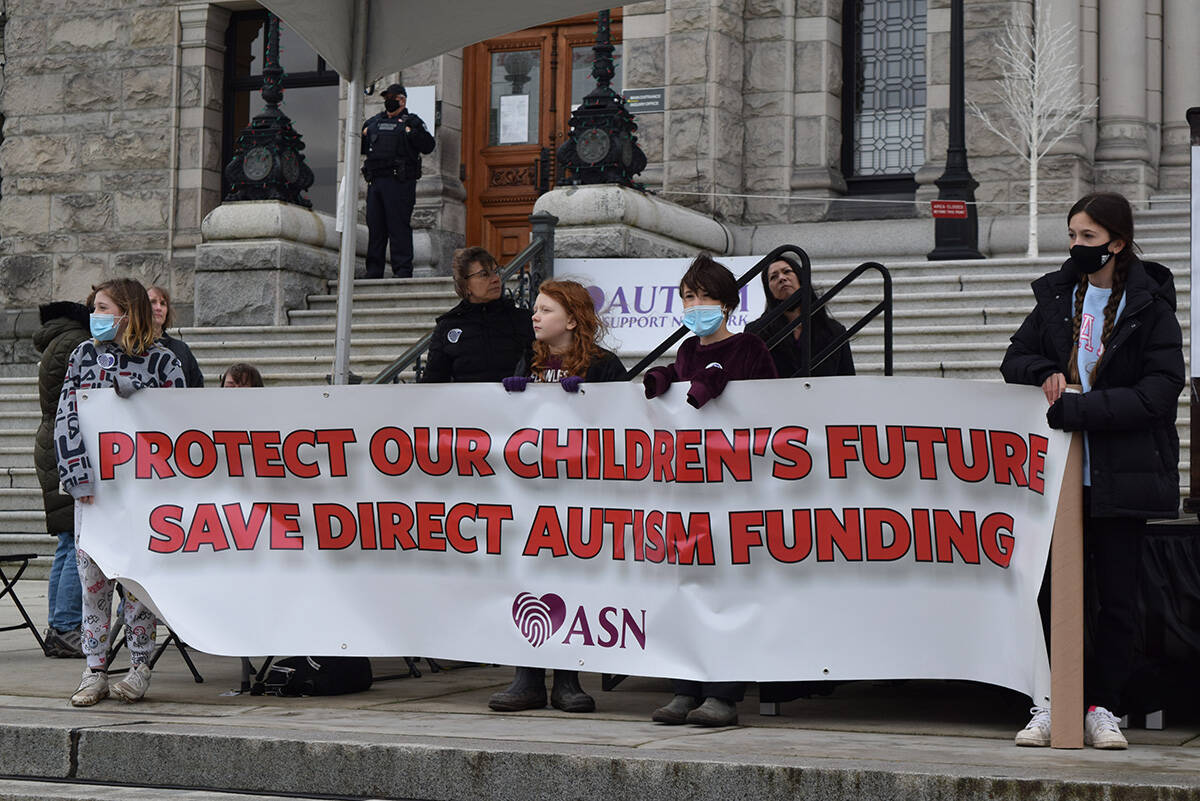 Children on the steps of the B.C. legislature rally for austim support. (Kiernan Green/News Staff) 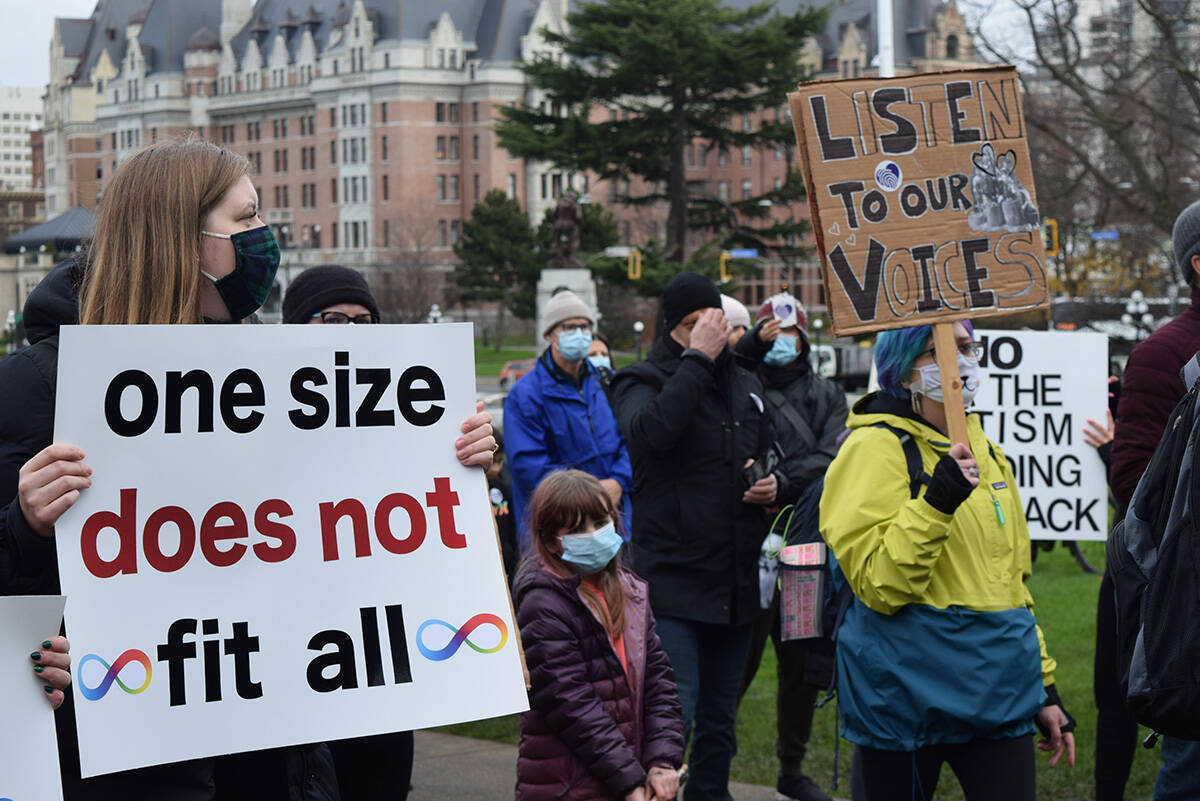 Those on the B.C. legislature lawn Wednesday were witness to an impassioned plea for the reversal of a decision to end individualized funding for children with autism or who are neurodiverse.

The decision, announced Oct. 27, will see the province provide hub-based support for children who are neurodiverse and have disabilities, with or without diagnoses, by 2025. The hundred or so advocates gathered for the afternoon rally implored the province to continue individual funding for the 21,500 children in B.C. diagnosed with autism.

Jaclyn Spittle of Maple Ridge said the new plan will make it incredibly hard for her autistic son and other children like him who rely on a home team of educators and health specialists.

“It takes away the foundation of their success,” she said. “The (former) program allowed us to stretch every dollar and have the best care providers for his individual strengths and weaknesses. They cheered him on, wrote every program, modified it and everything. This (new) plan will rip these people away from him.”

Louise Witt, a social worker and representative of the Autism Support Network of British Columbia, likened the decision to one made by the Ontario government in 2019. There, the transition from individualized to hub-based care swelled the wait list for autism treatment from 20,000 to 50,000, she said, calling it “a disaster for children and families” that resulted in the loss of jobs primarily held by women.

“We’re here to say ‘stop the autism funding clawback,’ and to (ask government to) ‘stop, listen and consult,’” Witt said.

The autism treatment lost through the province’s new decision will ultimately prove more expensive than that being cut, said adolescent psychologist Glenn Davis. Every public dollar spent on autism treatment saves two to three dollars for families that spend as much as $3 million for one’s care over their life.

The growth over 20 years from a handful of professionals trained for individual care in B.C. to 1,000 proves the effectiveness and sustainability of the old model, Davis added.

Karin Kirkpatrick, B.C. Liberal opposition critic for Children, Family Development and Childcare, told the crowd “it defies logic that you would design a system about people without speaking to those people.

“Every elected official in this building has an obligation to listen to the people of British Columbia and to make policies that are in the best interest of you and your families … government think that they know best, but when we’re talking about your children, you do,” she said.

Do you have a story tip? Email: kiernan.green@blackpress.ca.