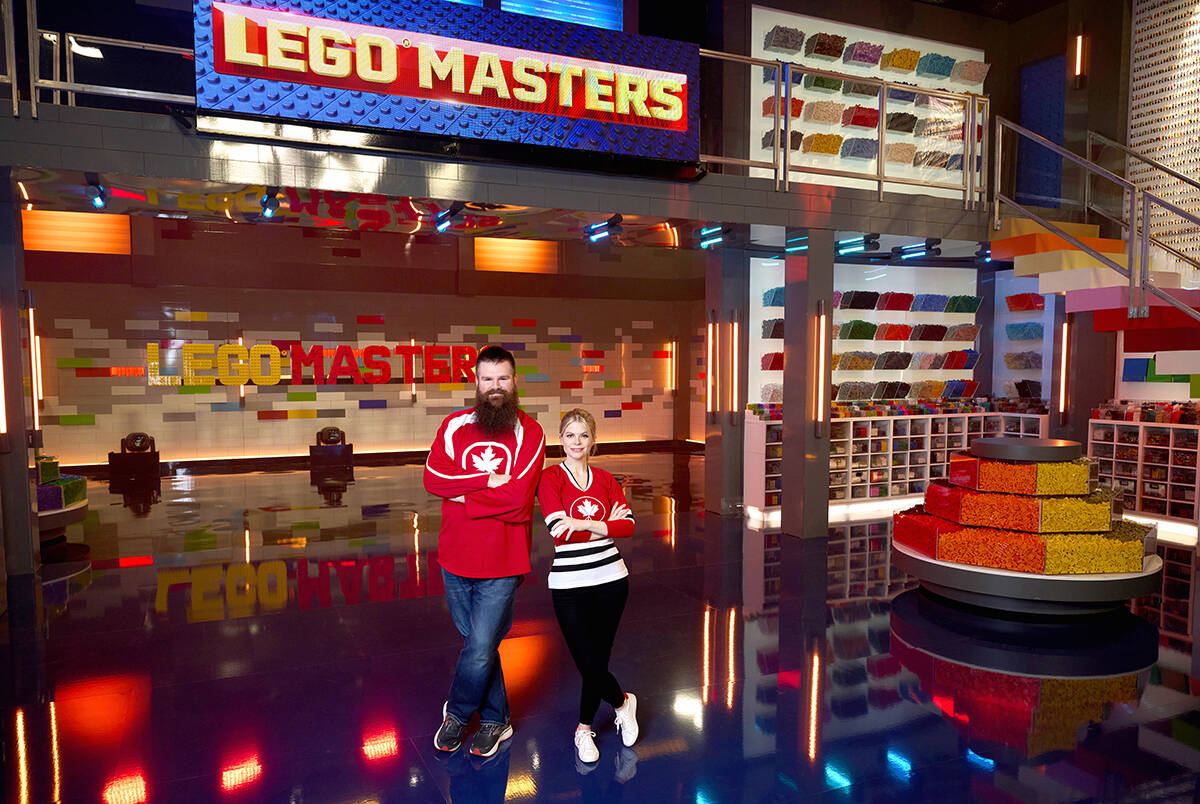 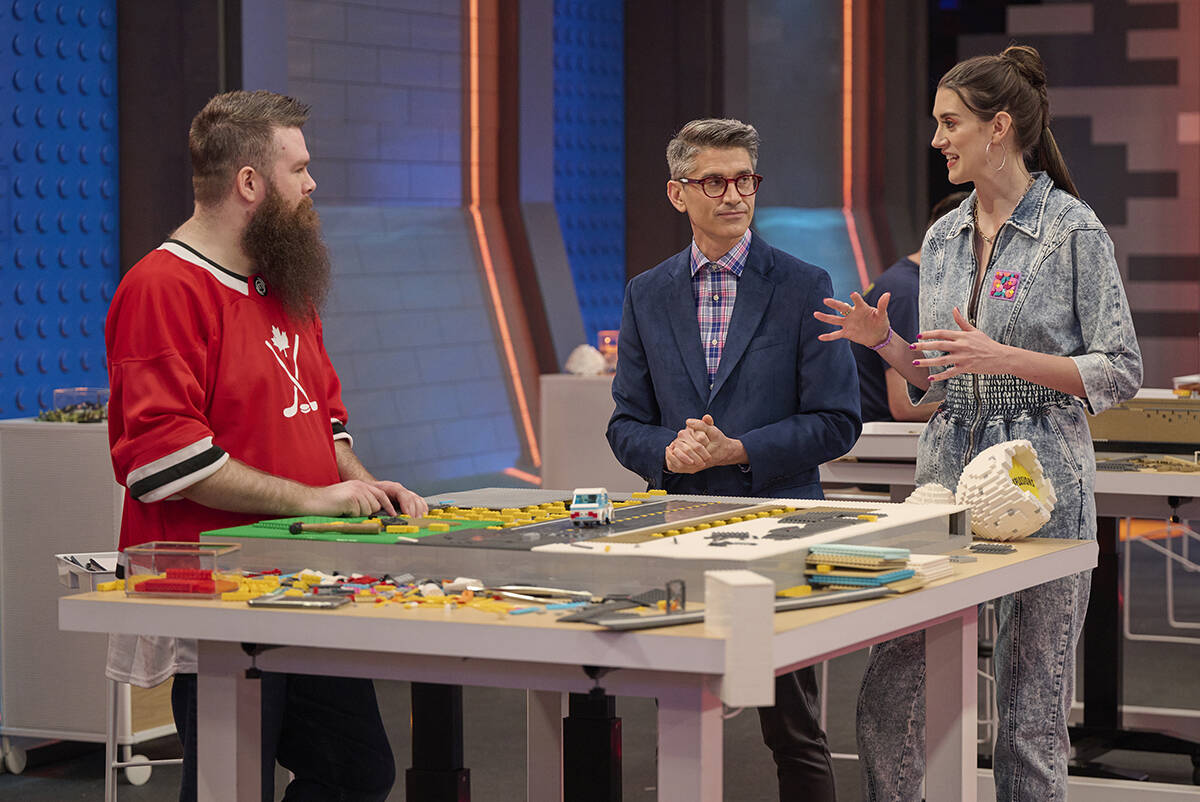 Dave Guedes with judges Jamie Berard and Amy Corbett in the Jurass-Brick World episode. (Tom Griscom, FOX/Special to The News) 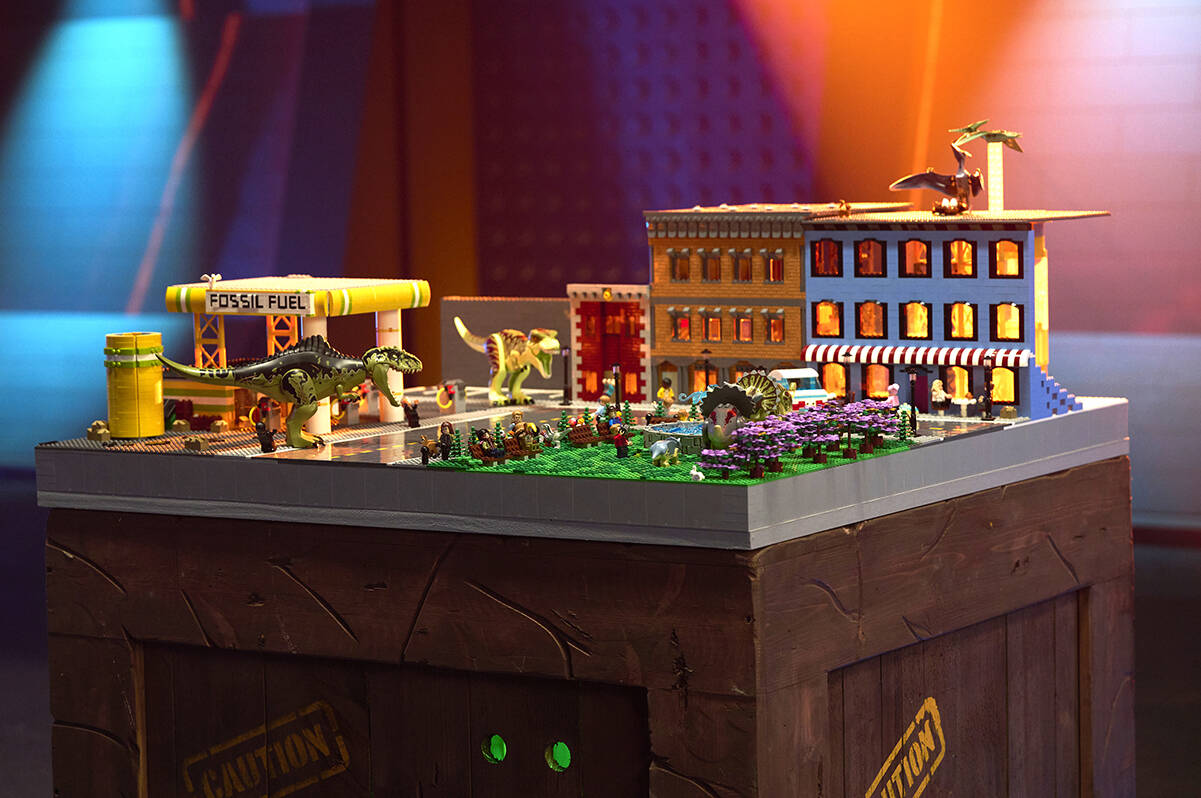 (Tom Griscom, FOX/Special to The News) 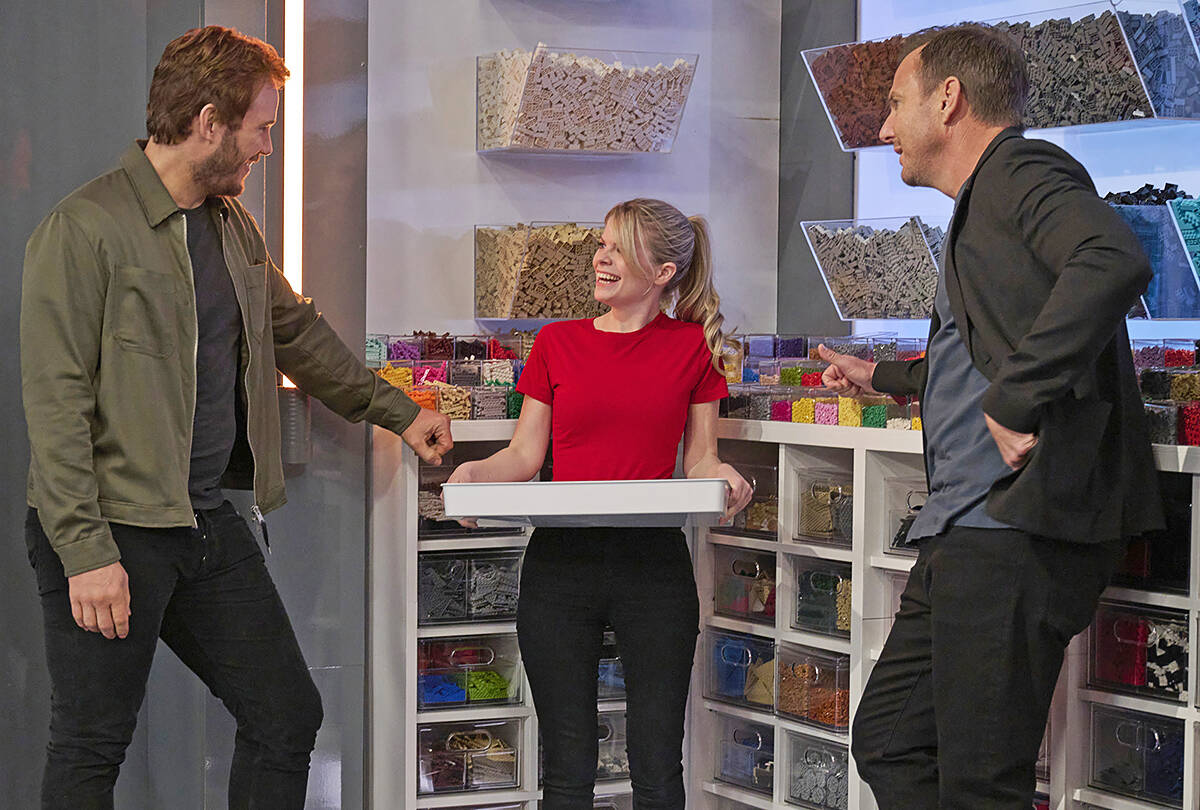 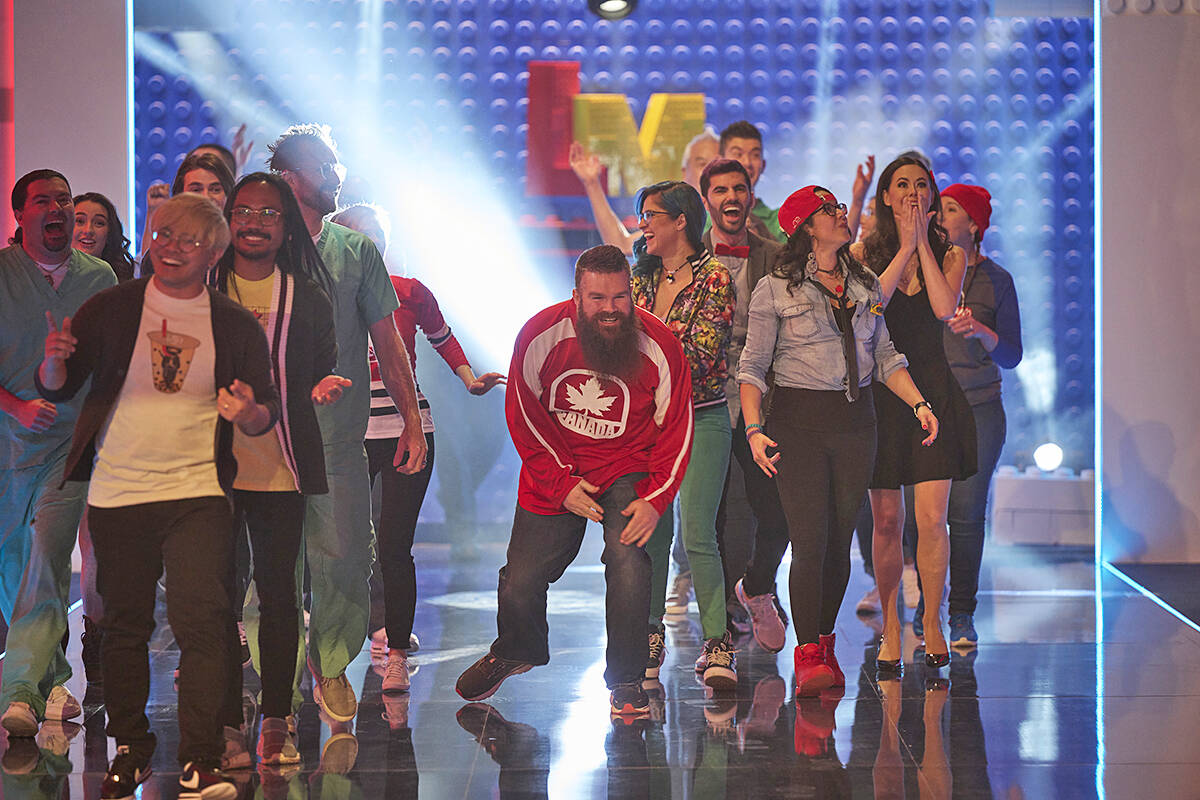 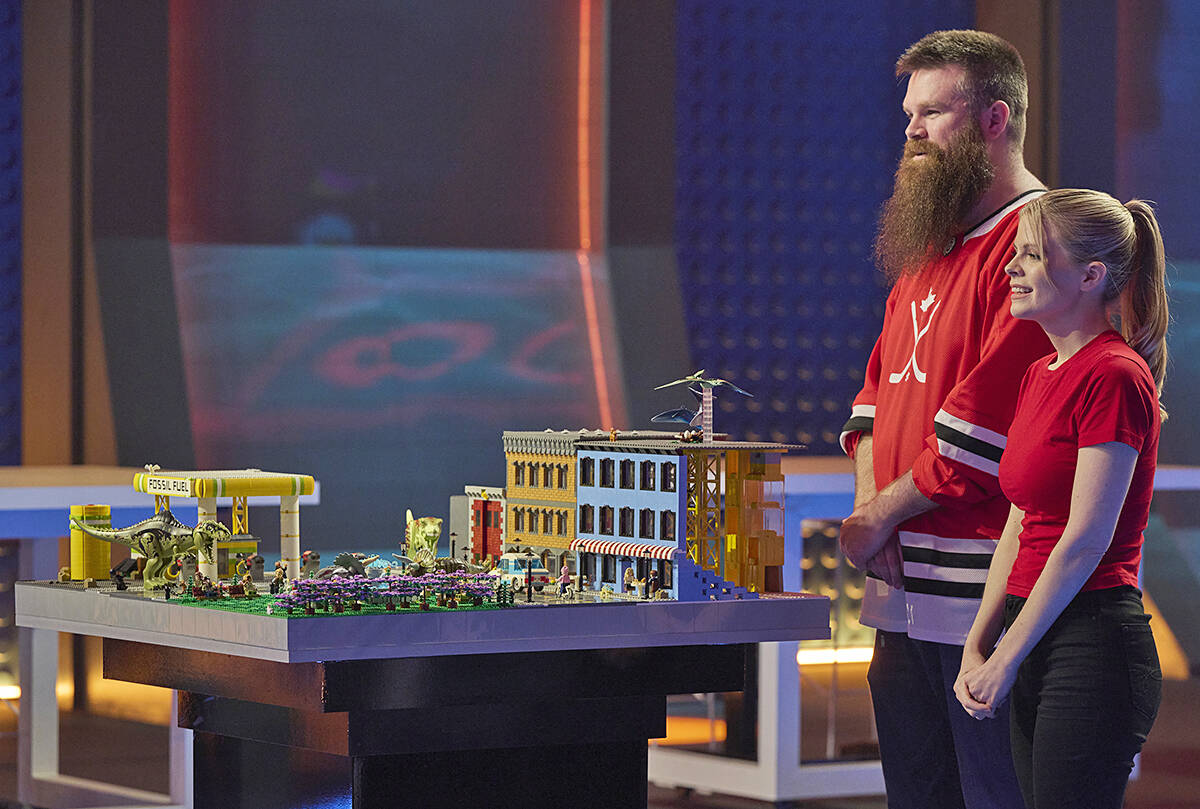 Dave and Emily in the Jurass-Brick World episode. (Tom Griscom, FOX/Special to The News)

It’s tough to be a television LEGO genius when Will Arnett is cracking you up on set, but that was the challenge for a brother-sister team from the Lower Mainland.

The Canadian actor who is known for his roles on Arrested Development and BoJack Horseman is the producer and host of LEGO Masters, a TV show that brings people with a passion for the iconic plastics bricks into a competition for a $100,000 prize.

David Guedes, 36, is a LEGO lifer who successfully auditioned for the show, and for his partner chose his sister Emily Guedes, 34. The show was finished shooting some six months ago, but they’re just watching it now. Last Wednesday they saw the airing of their Week Three challenge – to create a LEGO bull riding character to mount an actual mechanical bull.

They came up with Toby the Birthday Pig, who it turned out was not in the saddle for long.

“Nobody has ever done that before – that’s a crazy challenge,” said Emily. “Typically you don’t build LEGO to see it smashed.”

The next episode, which airs on Oct. 12 on CTV, will see the contestants building a tree house, with their younger selves in mind, which must be built in real trees.

They’re not talking about how the series turns out, except to say that they had a great time.

“The people we met on the show are like family now,” said Emily.

They were fans of Arrested Development, and of Canadian actor Will Arnett who played George Oscar Bluth.

“He’s exactly like that (character),” said Emily. “We were laughing constantly.”

David, now a Surrey resident, recalls their childhood in Maple Ridge with lots of LEGO in the scenes, starting with a big bucket of hand-me-down bricks when Emily was still just a baby.

Now she works as a nurse, and he is a Learning Centre Supervisor at Douglas College, but Lego has always been part of their lives. In 2016, David joined a BrickCon organization, for AFOLs (adult fans of LEGO).

“It’s amazing their genius ideas, and the things they can create,” he said.

Now he owns about two million bricks, and still loves to get yet another new LEGO box.

“It’s like a LEGO store in his house,” explained his sister.

Emily also still enjoys putting together LEGO sets, which she finds as therapeutic as other people do knitting or colouring.

“The puzzle aspect of it was always really fun to me,” she said.

The LEGO-loving siblings found that during the challenge they could disagree, or one shoot down the other’s ideas, without any bruised egos, bickering, or silent treatments.

“She’s a great teammate – we get along better than anyone else,” said David.

Now they are enjoying reliving the competition, as they watch it on television.

“It’s almost like watching a memory bank,” said Emily. “We were laughing all the time – it was so much fun doing it.”

David would encourage anyone thinking of an audition to get involved, and see how they stack up. He said most LEGO masters have some capacity for thinking like an engineer.

“But also being a little wacky is good.”