Charges against the officer who shot and killed South Surrey’s Hudson Brooks four years ago have been dropped.

The B.C. Prosecution Service announced Wednesday that a stay of proceedings against Const. Elizabeth Cucheran has been entered on charges of aggravated assault and assault with a weapon.

“She gets away with nothing. She just walks away,” Brooks told PAN through tears.

“I just feel like I’ve lost Hudson all over again.”

Twenty-year-old Hudson Brooks died July 18, 2015, after what police initially described as a physical struggle with a “suicidal” male outside of the South Surrey RCMP detachment, located in the 1800-block of 152 Street. The altercation also resulted in Cucheran being transported to hospital with a self-inflicted, non-life-threatening gunshot wound.

It was later confirmed that only police-issued firearms were found at the scene.

In the years that followed, Jennifer Brooks learned that her son had been shirtless and unarmed at the time he was shot, and that he was shot at close range. She and many others called repeatedly for charges, staging ‘Justice for Hudson’ rallies and marches.

Charges against Cucheran – who is currently on administrative leave – were announced in December 2017, and she was ordered to stand trial following a preliminary inquiry that wrapped up in Surrey Provincial Court last December.

Court appearances to fix dates for trial, however, were adjourned multiple times, and as recently as last month.

In Wednesday’s news release, BCPS officials say “issues that arose” during the preliminary hearing led to further investigation and the determination “that the available evidence no longer satisfies the charge assessment standard for the continued prosecution of Cst. Cucheran for any criminal offence.”

The stay of proceedings was “based on a careful review of new material received and consideration of an additional expert report,” as well as consultation with several use-of-force experts, the release states.

In a nine-page ‘Clear Statement’ issued with the news release – “in order to maintain confidence in the integrity of the criminal justice system” – the BCPS further details reasoning for the stay of proceedings, including that evidence that emerged in the preliminary inquiry “revealed significant shortcomings in the case against Cst. Cucheran.”

Crown’s initial theory had been that Cucheran was “not entitled to resort to lethal force as soon as she did” during the altercation with Brooks, and that she would have had time to use her Taser instead.

A summary of evidence that led to the initial charges details that Brooks was behaving erratically in the early hours of July 18, 2015, after consuming significant quantities of alcohol and cocaine; wandering the streets shoeless and wearing only boxer shorts, vandalizing vehicles and saying loudly “Kill me!” “They’re going to kill me!” and “Sorry, mom!”

He attacked an officer’s SUV, hammering at the driver’s door and window with his arms, hands, elbows, knees, shoulder and head, causing the officer to believe “he would be ‘severely injured, if not worse…’” if Brooks got in, the statement continues.

Cucheran was among officers who responded, eventually firing her gun 12 times at a “charging,” aggressive Brooks; nine of the bullets hit.

“While Cst. Cucheran may have had a subjective belief that lethal force was necessary, on the available evidence this belief was not objectively reasonable,” the statement says.

Evidence brought out during cross-examination at the preliminary hearing, however – including an expert’s opinion that Brooks was likely suffering from ‘excited delirium’ at the time – “provided significant context and objective support for a conclusion that Mr. Brooks posed an imminent risk of grievous bodily harm or death.”

The changes in the evidence were “critical,” according to the statement.

“The Crown is now of the view that the evidence strongly establishes that (Cucheran’s) resort to her firearm was entirely reasonable in the circumstances.”

Jennifer Brooks – noting that evidence she heard at the preliminary hearing included that officers were making jokes “as my son lay dying” – returned to the scene of her son’s death Wednesday afternoon to reiterate her disbelief in the news and dispute the argument that excited delirium was reasonable justification for Cucheran’s use of force.

She said it sets a precedent for how others who experience similar distress can be treated.

“My son was having a bad night, he needed help, he got shot nine times,” Brooks said. “Excited delirium? No one’s had a bad night?

“This is sending a message that anybody can do this – you can shoot somebody nine times, a young boy, unarmed, without shoes or without a shirt, and you can walk away. That’s what this is showing today.

“It feels like they shot Hudson all over again… and now they can say his life doesn’t matter.”

Brooks said she will be seeking legal advice as a result of the stay-of-proceedings decision. 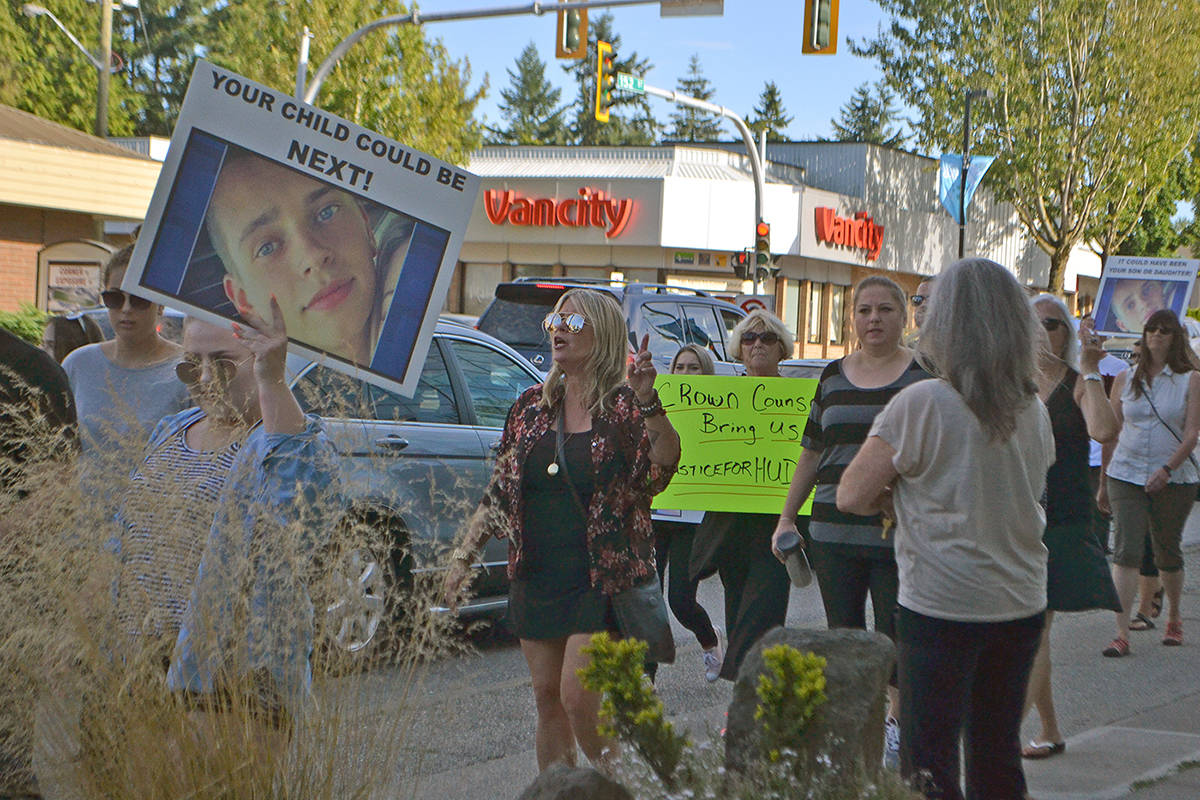 Jennifer Brooks protests with family and friends during calls for Crown counsel to move forward with charges in connection with the police-shooting death of her son, Hudson. (File photo) 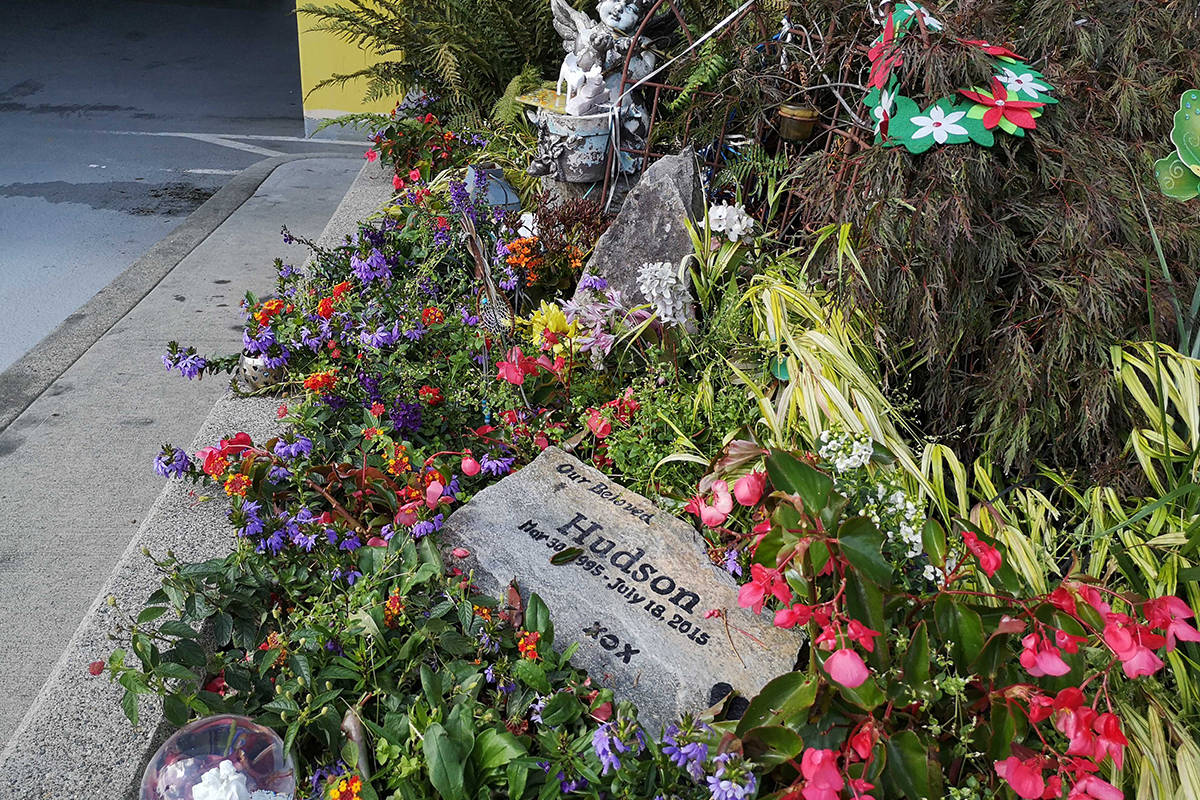 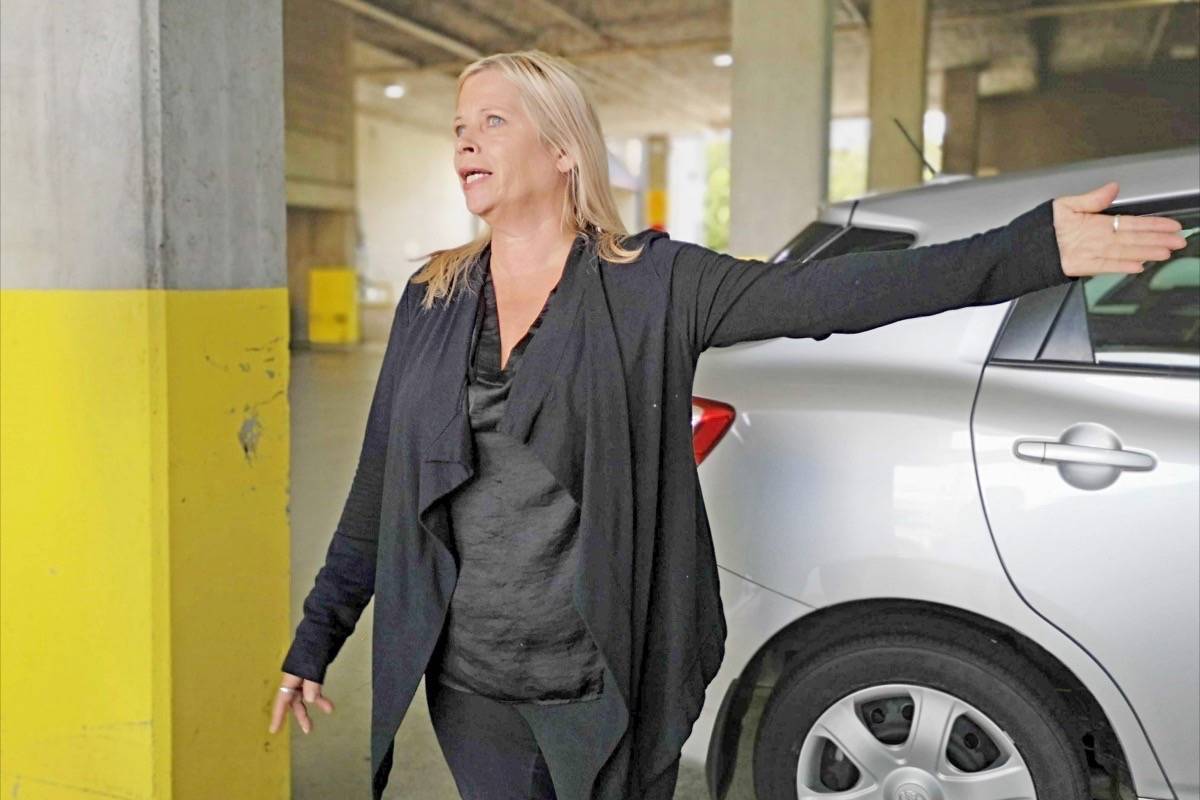 Jennifer Brooks speaks at the scene of her son’s July 2015 death, following news charges against the officer who fatally shot her son have been dropped. (Tracy Holmes photo)