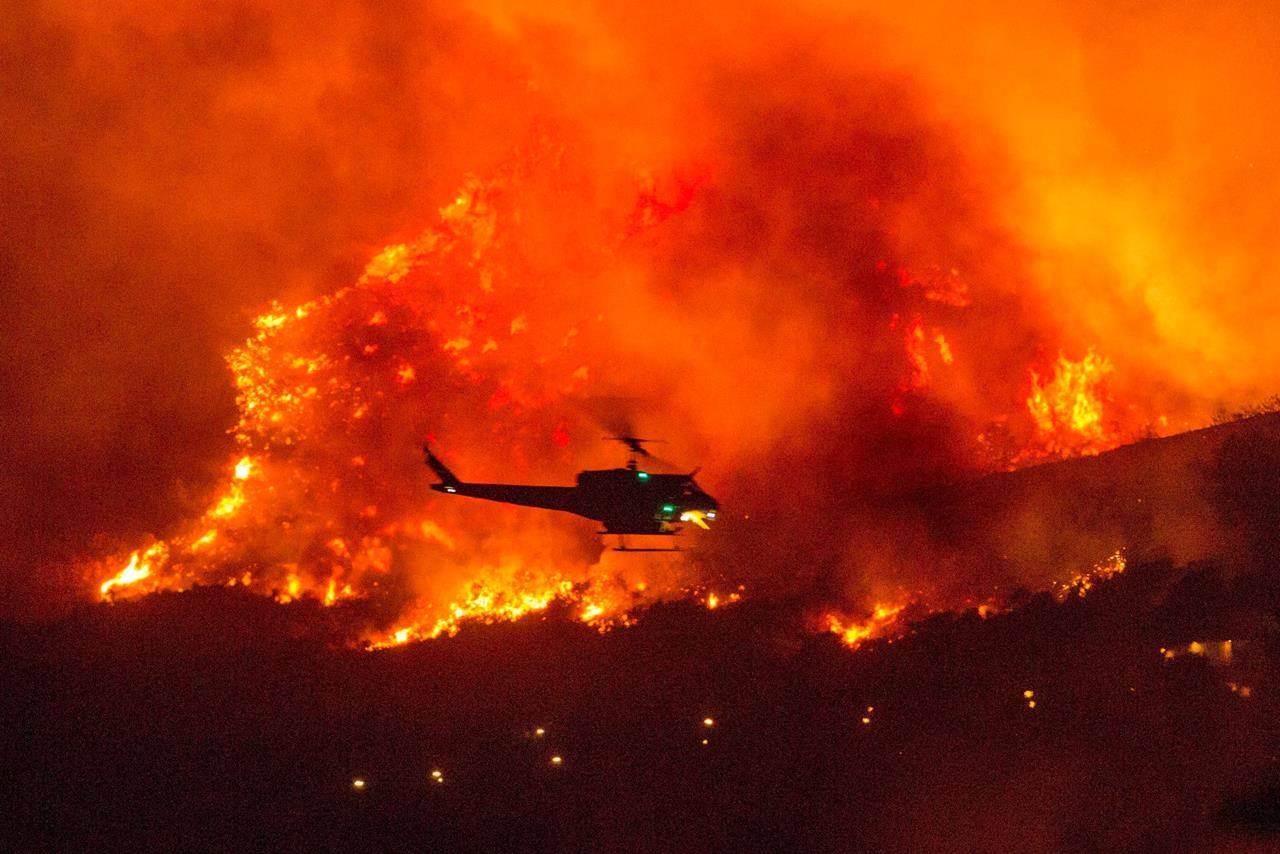 A helicopter prepares to drop water at a wildfire in Yucaipa, Calif., Saturday, Sept. 5, 2020. Three fast-spreading California wildfires sent people fleeing Saturday, with one trapping campers at a reservoir in the Sierra National Forest, as a brutal heat wave pushed temperatures into triple digits in many parts of state. (AP Photo/Ringo H.W. Chiu) 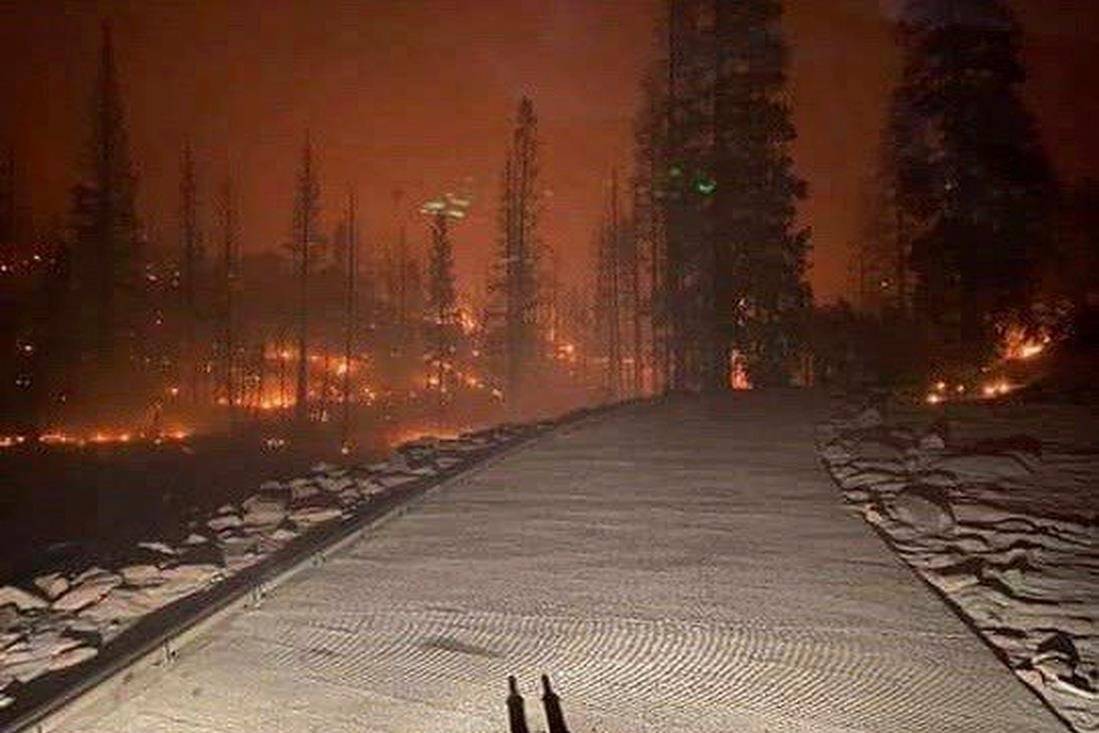 In this Saturday, Sept. 5, 2020, photo released by the California National Guard, shows the view from a Cal Guard Chinook helicopter last night rescuing people trapped after the Creek Fire in central California left them stranded. More than 200 people were airlifted to safety after a fast-moving wildfire trapped them in a popular camping area in California’s Sierra National Forest. The California Office of Emergency Services said Black Hawk and Chinook helicopters were used for the rescues that began Saturday night and continued overnight. (California National Guard via AP) 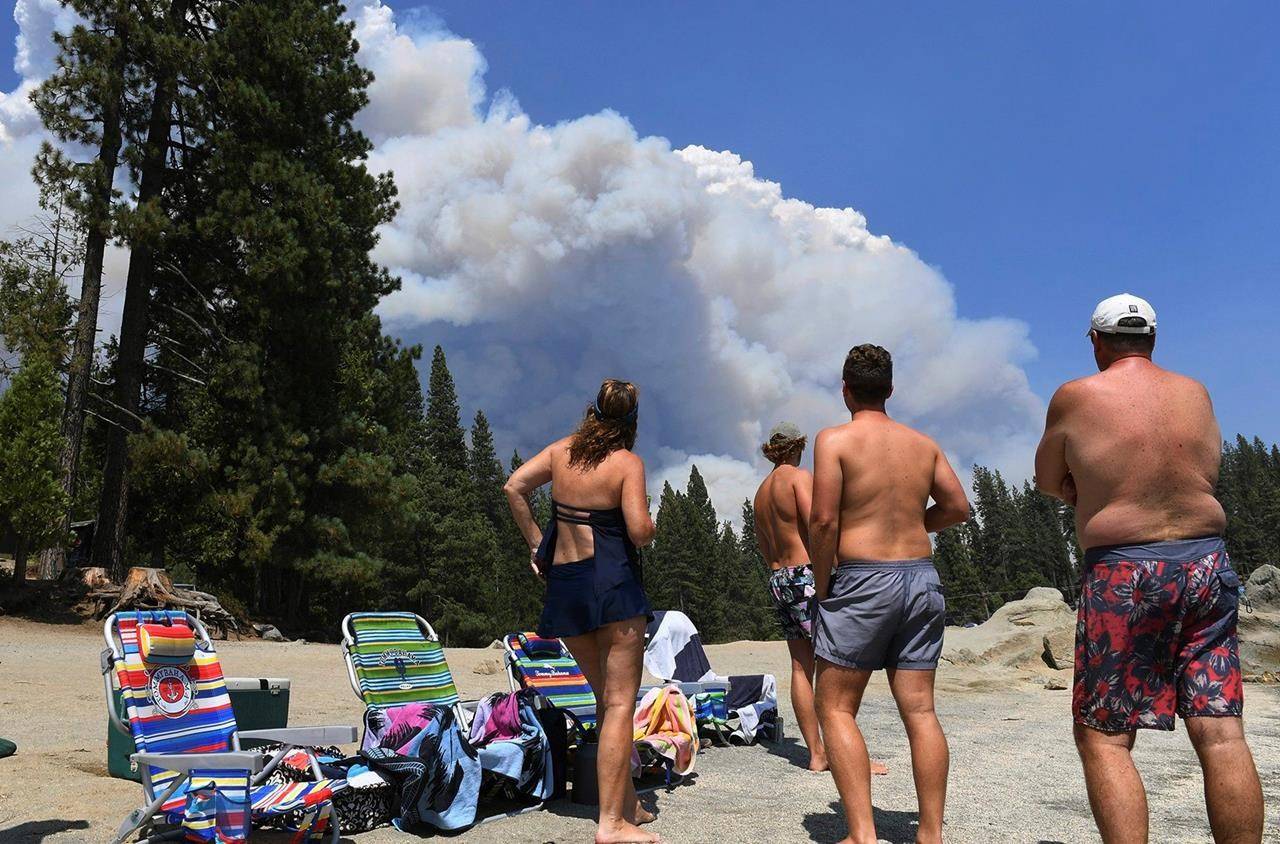 A family from Ventura County watches, from the shore of Shaver Lake, the billowing smoke from the Creek Fire, Saturday, Sept. 5, 2020, northeast of Fresno, Calif. (Eric Paul Zamora/The Fresno Bee via AP) 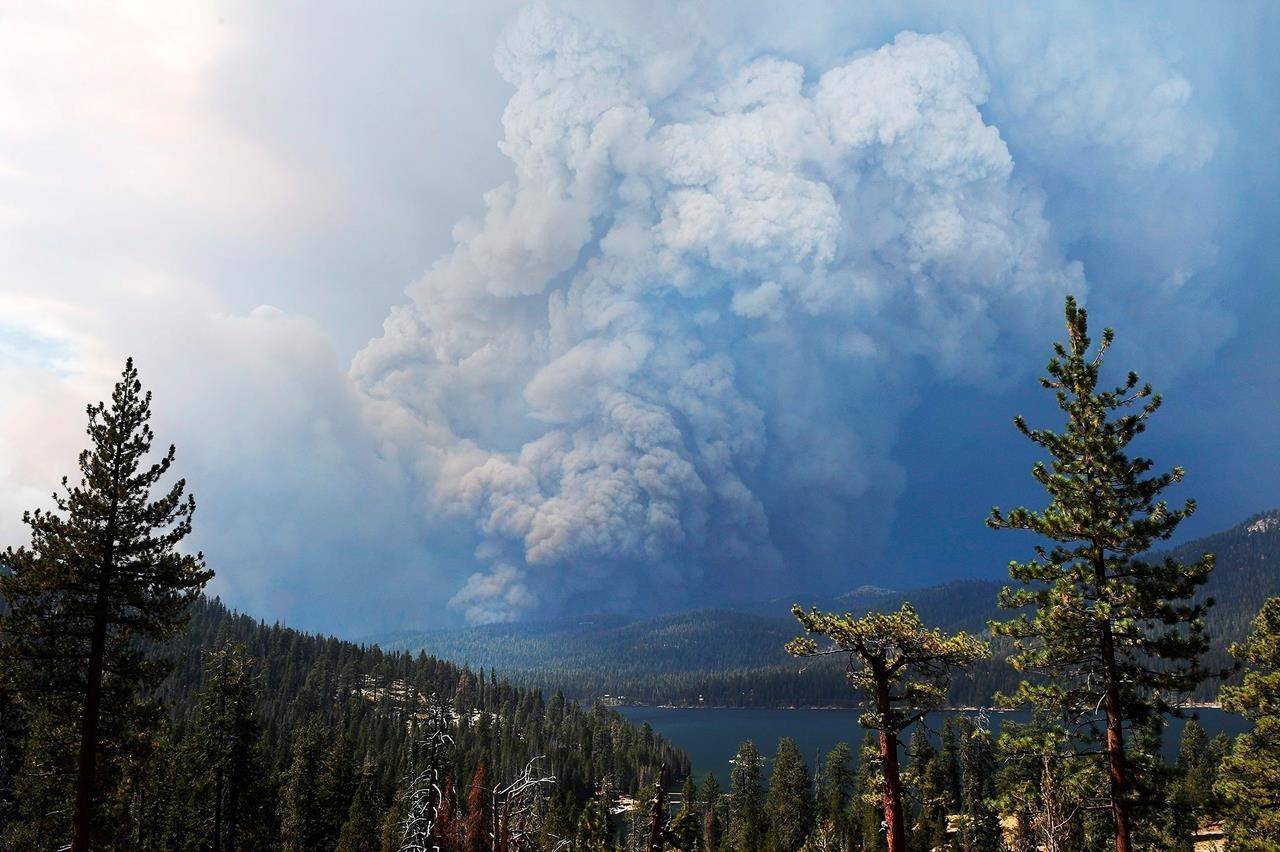 Plumes of smoke rise into the sky as a wildfire burns on the hills near Shaver Lake, Calif., Saturday, Sept. 5, 2020. Fires in the Sierra National Forest have prompted evacuation orders as authorities urged people seeking relief from the Labor Day weekend heat wave to stay away from the popular lake. (Eric Paul Zamora/The Fresno Bee via AP) 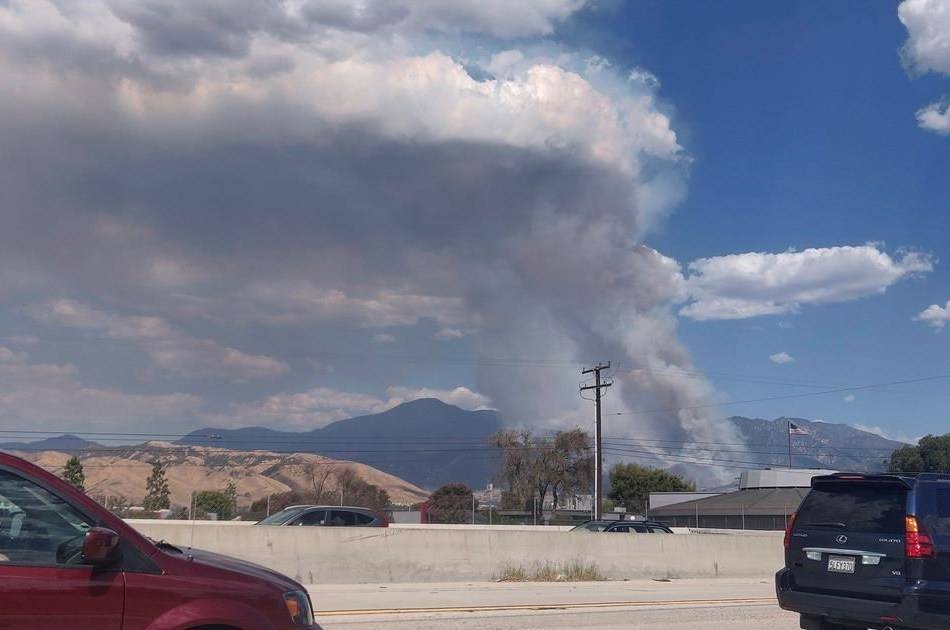 A plume of smoke from the El Dorado Fire is seen from the Interstate 10 in Loma Linda, Calif., Saturday, Sept. 5, 2020. In Southern California, a fast-moving fire in the foothills of Yucaipa has prompted evacuation orders for Oak Glen, a farm community that just opened its apple-picking season to the public. Cal Fire’s San Bernardino unit said the fire has scorched at least 800 acres and was burning at a “moderate to dangerous” rate of spread. (AP Photo/Ringo H.W. Chiu) 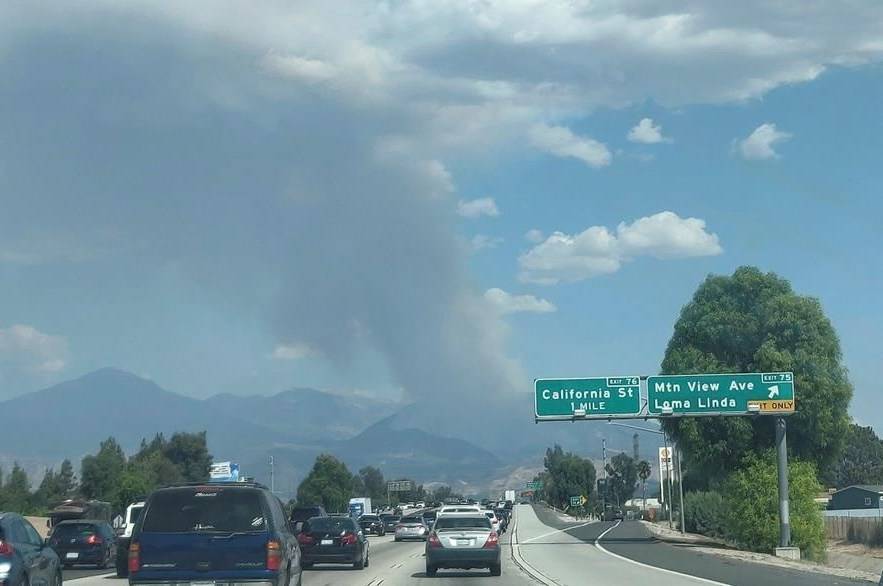 A plume of smoke from the El Dorado fire is seen from the Interstate 10 in Loma Linda, Calif., Saturday, Sept. 5, 2020. In Southern California, a fast-moving fire in the foothills of Yucaipa has prompted evacuation orders for Oak Glen, a farm community that just opened its apple-picking season to the public. Cal Fire’s San Bernardino unit said the fire has scorched at least 800 acres and was burning at a “moderate to dangerous” rate of spread. (AP Photo/Ringo H.W. Chiu)

Evacuation orders were expanded Monday to more mountain communities as a huge wildfire churned through California’s Sierra National Forest, one of dozens of blazes crews battled during a heat wave that shattered records across the state.

Firefighters working in steep terrain through the night saved the tiny town of Shaver Lake from flames that roared down hillsides toward a marina. To the north, about 30 houses were destroyed in the remote hamlet of Big Creek.

“About half the private homes in town burned down,” Big Creek resident Toby Wait said. “Words cannot even begin to describe the devastation of this community. And it is a very close-knit community.”

An elementary school, church, library, historic general store and a major hydroelectric plant were spared in the community of about 200 residents, Wait told the Fresno Bee.

Sheriff’s deputies went door to door to make sure residents were complying with orders to leave. Officials hoped to keep the fire from pushing west into rural towns along State Route 41 and possibly Yosemite National Park.

The blaze dubbed the Creek Fire has charred more than 114 square miles (295 square kilometres) of timber after breaking out Friday. The 850 firefighters on the scene had yet to get any containment after three days of work in sweltering heat. There was no official tabulation yet of structures lost.

On Saturday, rescuers in military helicopters airlifted 207 people to safety after flames trapped them in a wooded camping area near Mammoth Pool Reservoir northeast of Fresno.

In Southern California, crews scrambled to douse several fires that roared to life in searing temperatures, including one that closed mountain roads in Angeles National Forest. The California Department of Forestry and Fire Protection, or Cal Fire, said a blaze in San Bernardino County called the El Dorado Fire started Saturday morning and was caused by a smoke-generating pyrotechnic device used by a couple to reveal their baby’s gender.

A fire in the Angeles National Forest northeast of Los Angeles forced the evacuation of Mount Wilson Observatory.

In eastern San Diego County, the Valley Fire broke had destroyed at least 10 structures after burning 16 square miles (41.44 square kilometres) and prompting evacuations near the remote community of Alpine in the Cleveland National Forest.

Daytime temperatures in fire zones neared or exceeded triple digits. Downtown Los Angeles reached 111 degrees (44 Celsius) on Sunday and a record-shattering high of 121 degrees (49.4 Celsius) was recorded in the nearby Woodland Hills neighbourhood of the San Fernando Valley. It was the highest temperature ever recorded in Los Angeles County, according to the National Weather Service.

Meanwhile, downtown San Francisco set a record for the day with a high of 100 (37.7 Celsius) on Sunday, smashing the previous mark by 5 degrees.

The exceptionally hot temperatures were driving the highest power use of the year, and transmission losses because of wildfires have cut into supplies. The California Independent System Operator that manages the state’s power grid warned that up to 3 million people could lose power Sunday if the if residents didn’t curtail their electricity usage.

The weather forecast called for more heat Monday and the grid operators again urged people to conserve power between 3 p.m. and 9 p.m.. when usage is highest. Cooler temperatures were expected Tuesday but the weather change also was expected to bring winds that could fan wildfires.

Pacific Gas & Electric, the state’s largest utility serving customers in Central and Northern California, warned customers that it might cut power starting Tuesday because of the increased fire danger. Some of the state’s largest and deadliest fires in recent years have been sparked by downed power lines and other utility equipment. All of Northern California has moderate to severe drought conditions.

Cal Fire said 14,800 firefighters were battling 23 major fires in the state. California has seen 900 wildfires since Aug. 15, many of them started by an intense series of thousands of lightning strikes. The blazes have burned more than 1.5 million acres (2,343 square miles). There have been eight fire deaths and more than 3,300 structures destroyed.

‘It is urgent:’ Commissioner calls for Indigenous bodies to oversee police 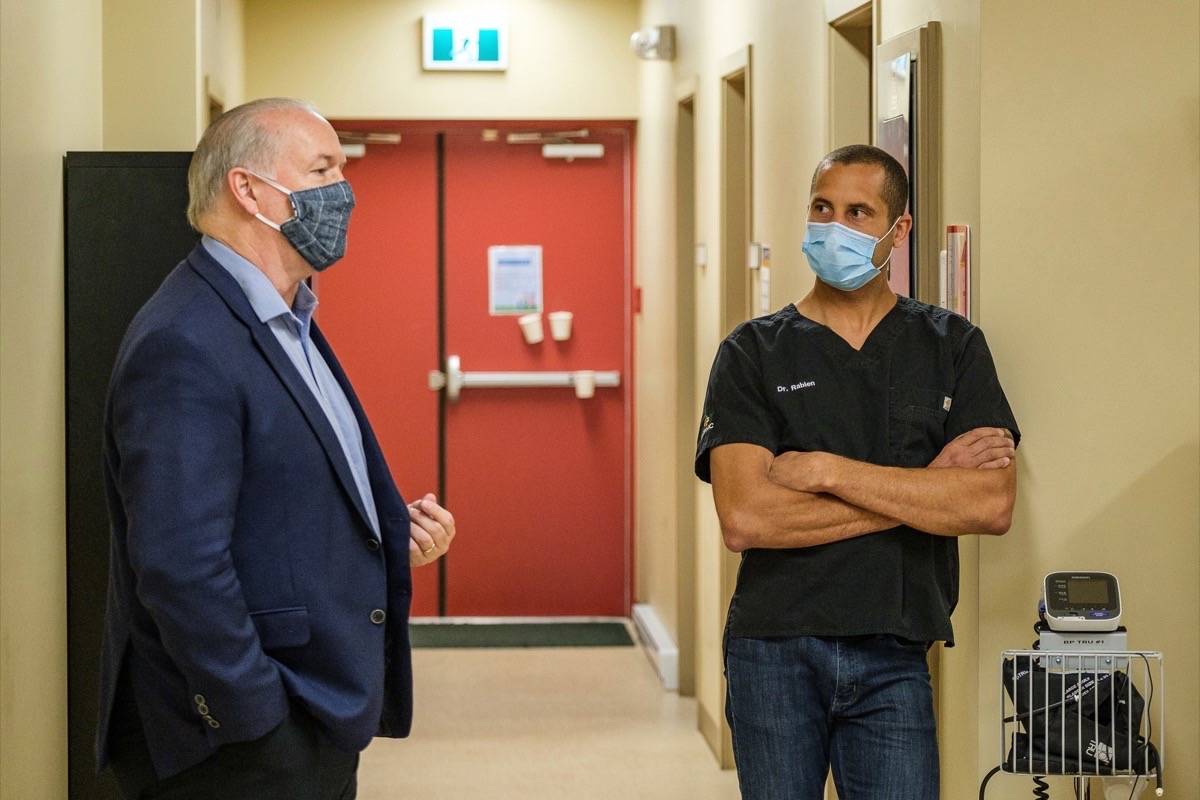 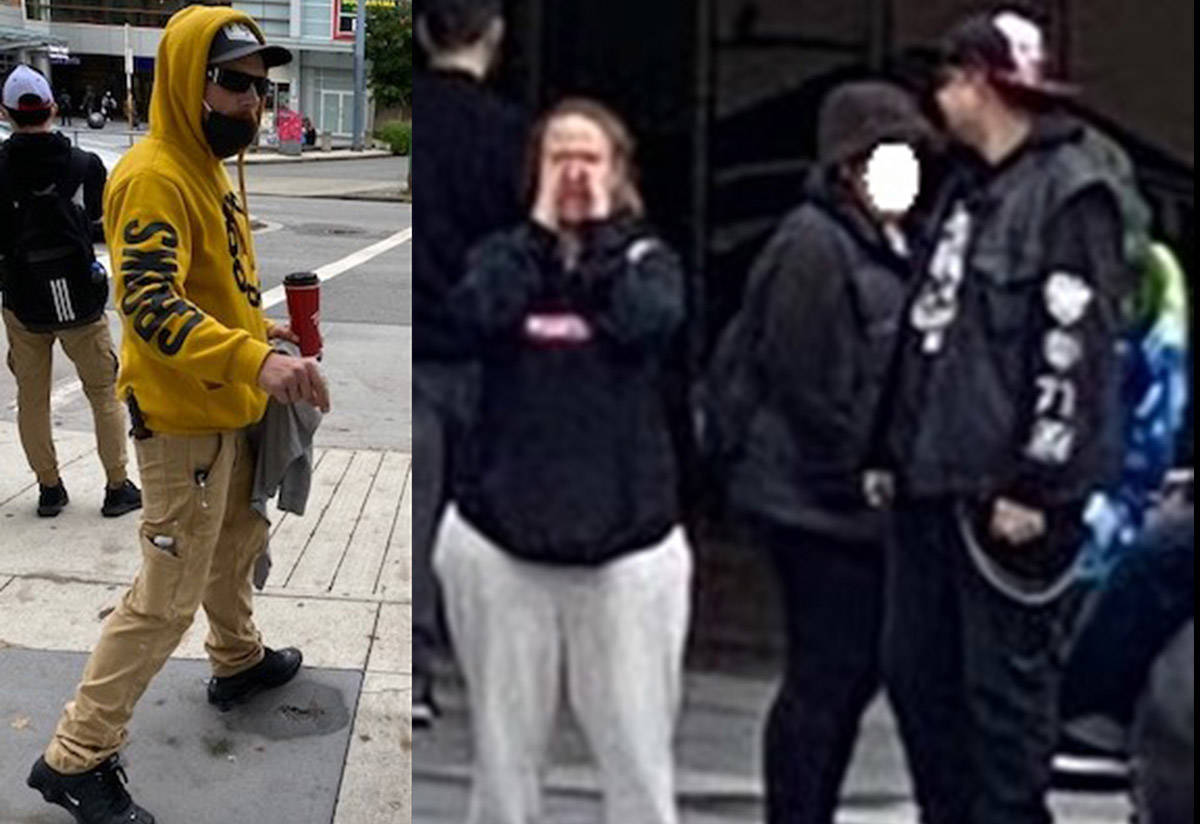 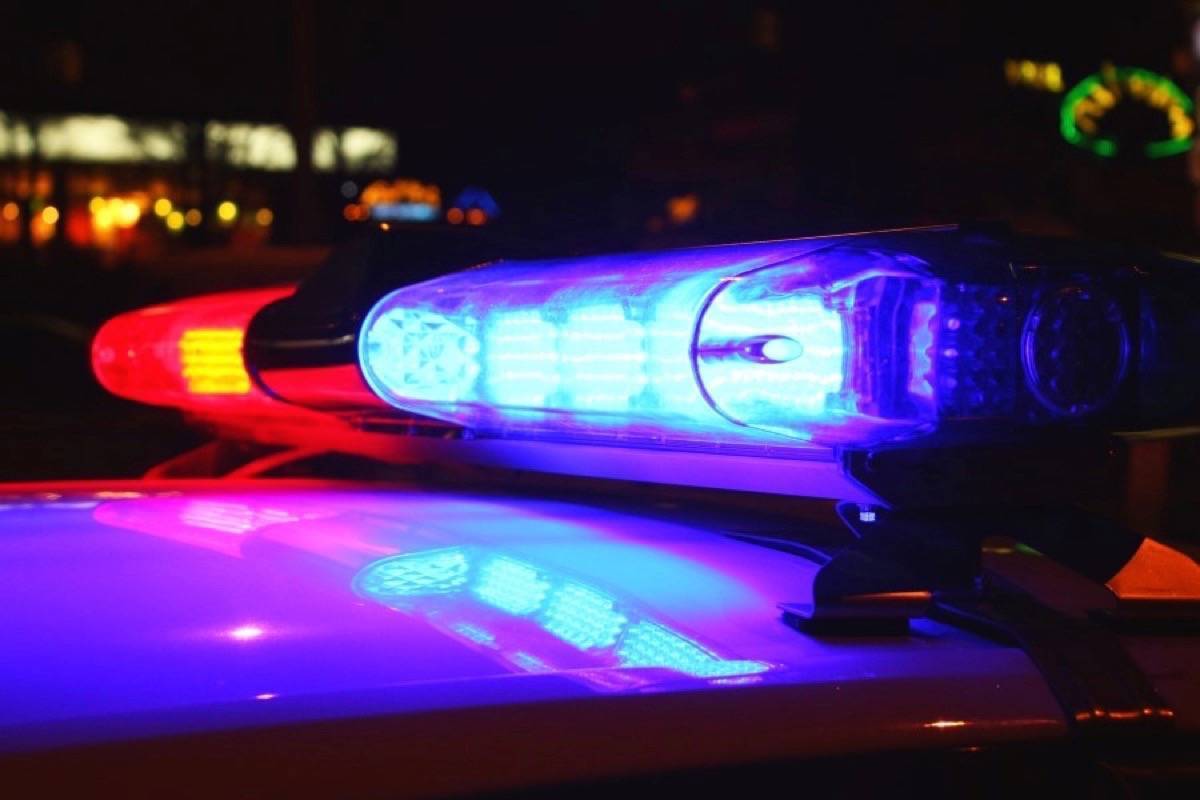 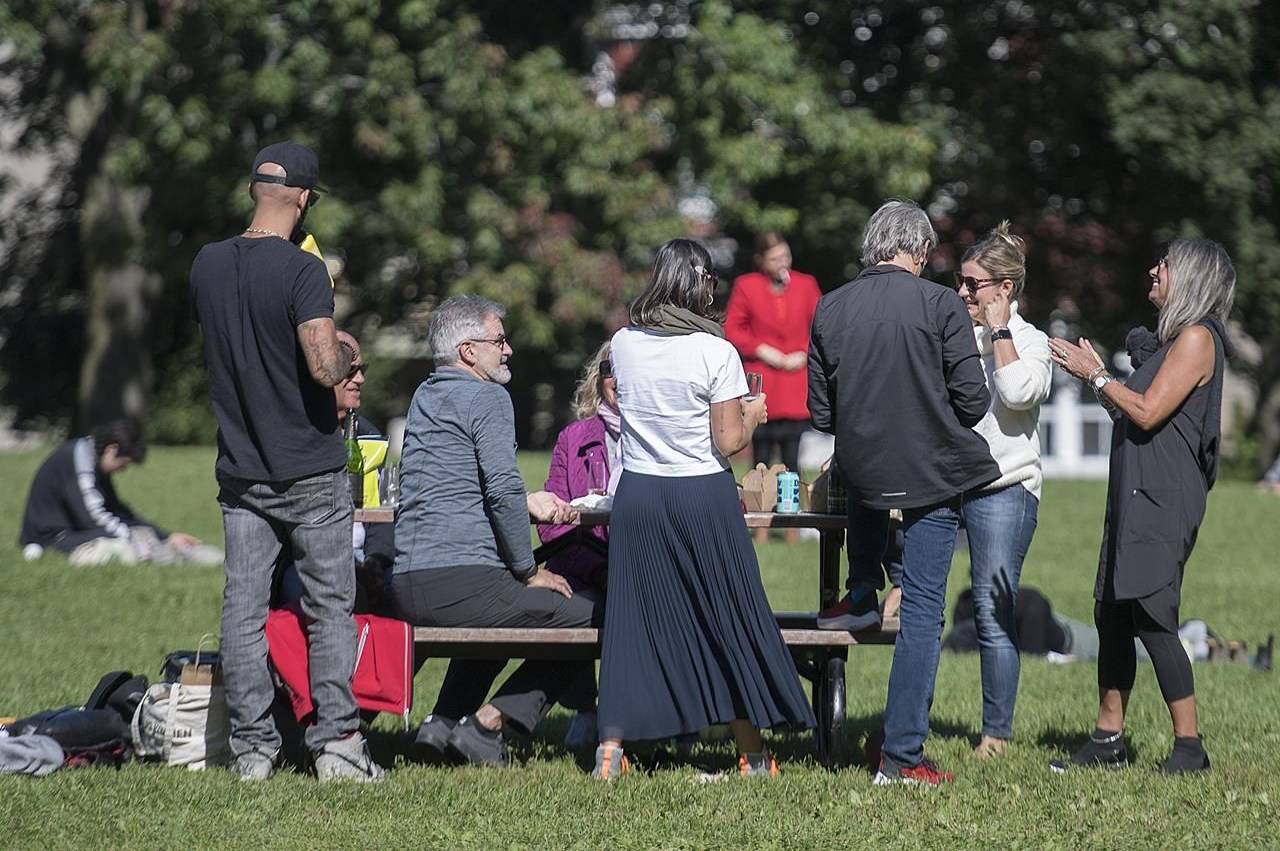 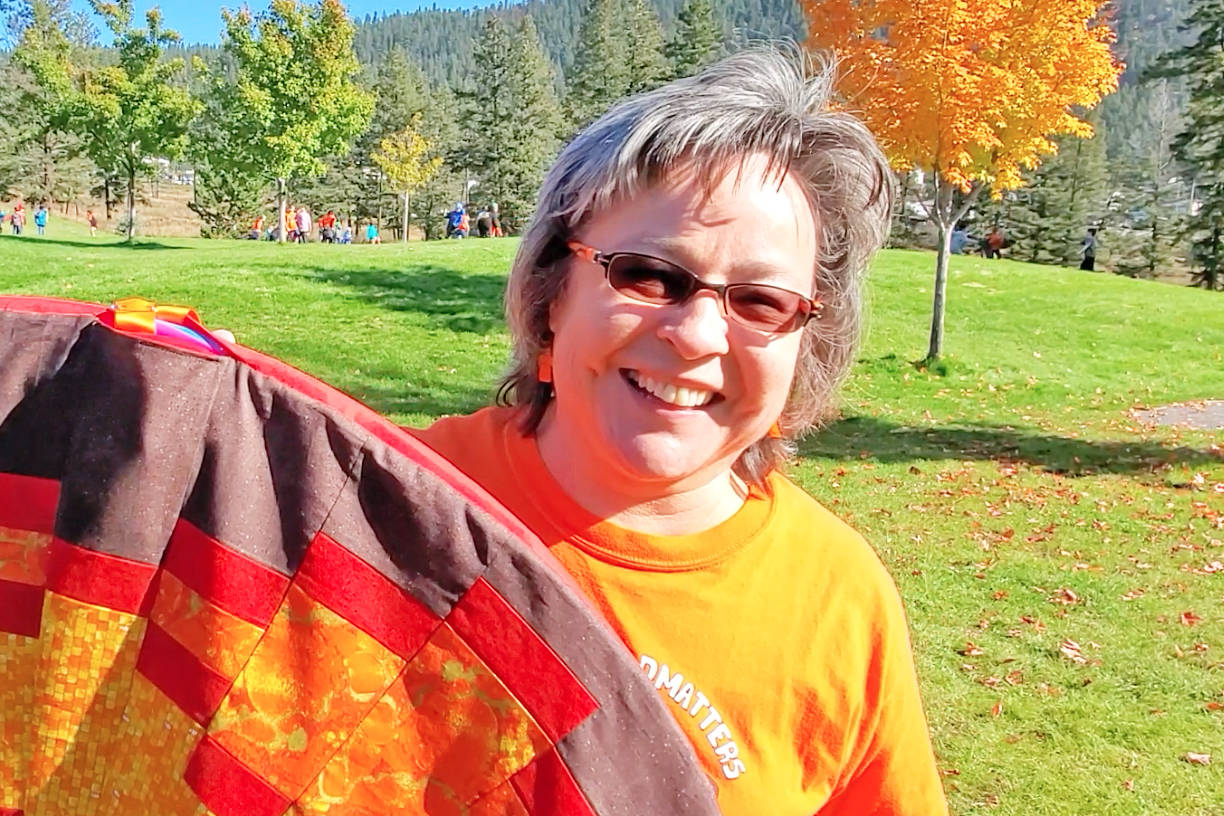