A group of Fraser Valley cyclists will be riding more than 400 kilometres in one day this weekend, hoping to raise hundreds of thousands of dollars for cancer research.

“It’s all about trying your very best,” said Darrell Fox, Terry Fox’s younger brother. “One of Terry’s sayings was ‘Anything is possible if you try.’ I believe in that. I think limitations are self-imposed and we can do anything we set our mind to.”

And so, a group of about 15 cyclists on the Fraser Valley Try Like Terry Team will be doing just that as they cycle 410 kilometres in the Ride of Hope through Vancouver and around the Fraser Valley on Saturday, July 3. They leave at 5 a.m. from Terry Fox Plaza in Vancouver and will be riding from sunup to sundown and are hoping to finish as the sun is setting around 9:15 p.m. at Vedder Park. 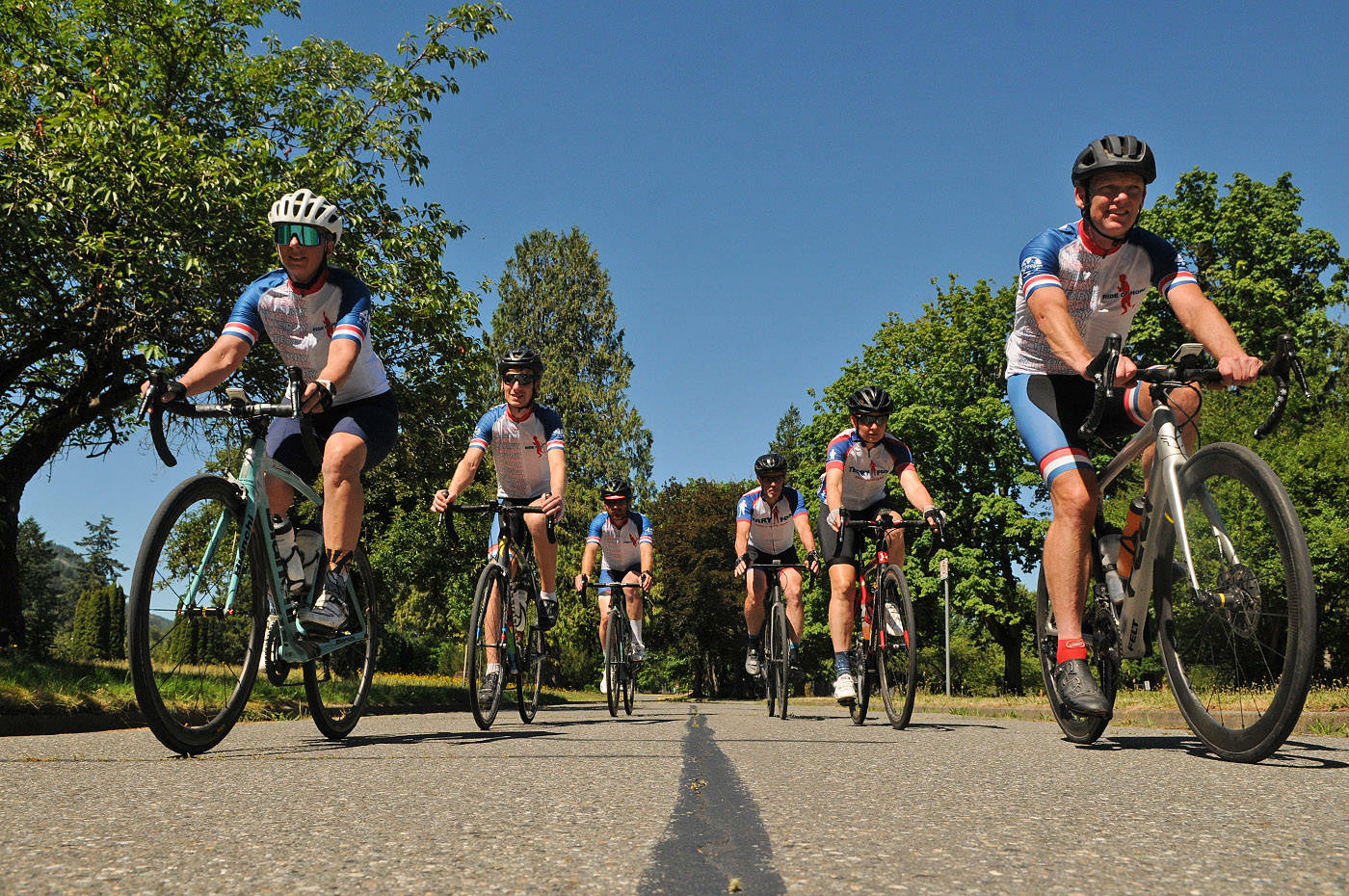 Members of the Fraser Valley Try Like Terry team, including Terry Fox’s brother Darrell Fox (right) are gearing up for their 410-kilometre Ride of Hope fundraiser on July 3, 2021. (Jenna Hauck/ Chilliwack Progress)

The Ride of Hope was started by Darrell in 2015 in celebration of the 35th anniversary of Terry’s Marathon of Hope. It was a way to give people who cannot run anymore another way to satisfy their desire for exercise, he said.

Cyclists across Canada rode 350 kilometres that year to raise funds for the Terry Fox Foundation. Almost every year that followed, the length of the ride increased by 10 kilometres. This year, participants will be riding 410 kilometres on the 41st year of the Marathon of Hope.

The weather forecast is calling for toasty temperatures on July 3, and the team has a well-planned route with about 10 rest stops where they can refuel along the way.

“The riding community is very social and very giving and that’s what I really appreciate about the people that I now ride with,” Darrell said, surrounded by five other members of his team on June 26.

Not one member on the team has ridden 410 kilometres in one day before, but if their attitude says anything about how they’ll fare, the Fraser Valley Try Like Terry Team will be finishing the full route with smiles on their faces.

“I know with every loonie we raise today we’re saving lives in the future. I’ve seen progress, I’ve witnessed it,” Darrell said. “It’s what brings us together.”

Cameron Ross, one of the members of the team, is a cancer survivor.

He will be riding the entire 410 kilometres that day and calls the Ride of Hope a “cool opportunity.”

“Darrell’s got a vision and a passion that draws people in,” Ross said.

“I’m determined to do whatever I can to eliminate this disease,” he said. 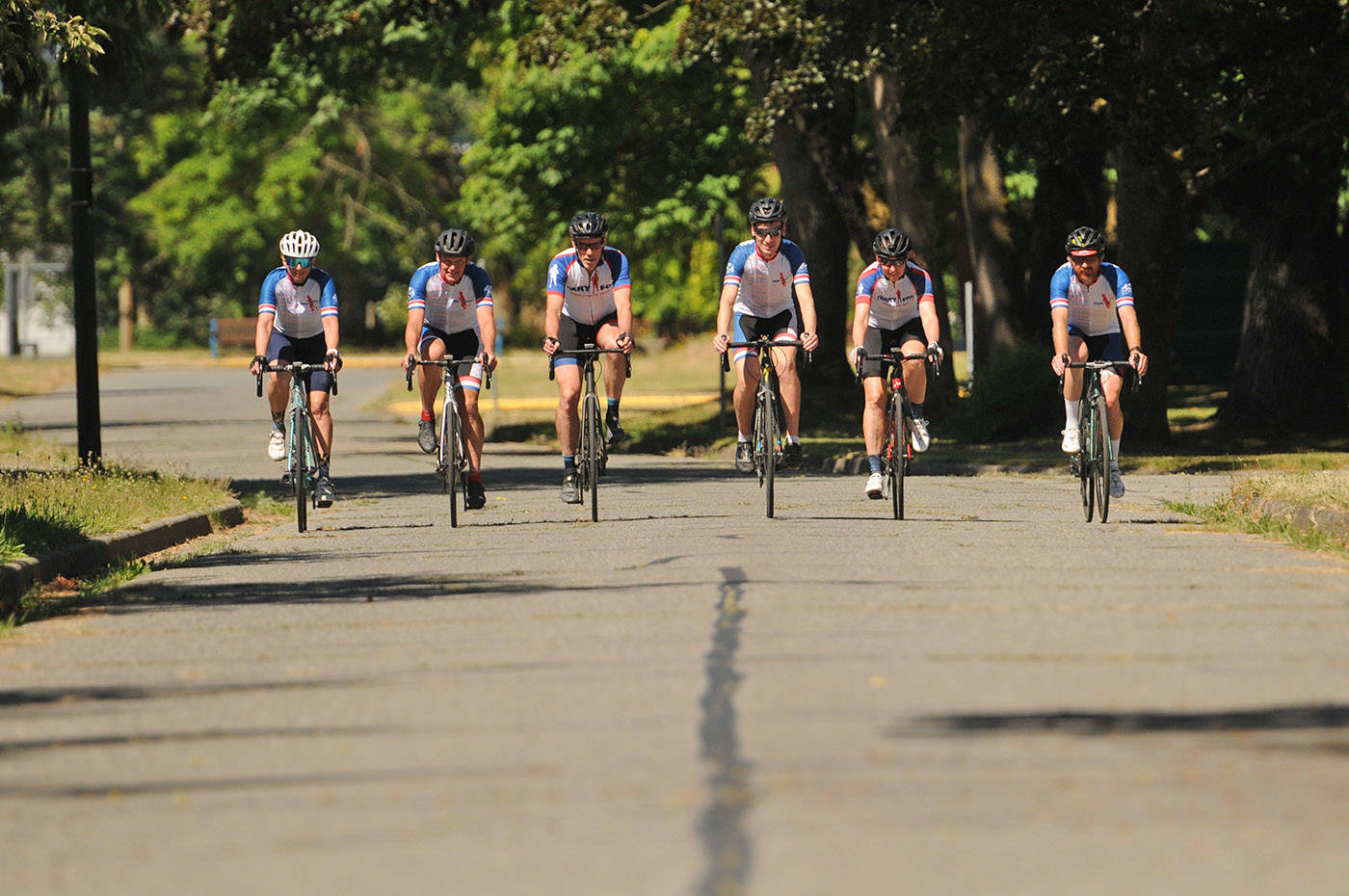 Members of the Fraser Valley Try Like Terry team, including Terry Fox’s brother Darrell Fox second from left) are gearing up for their 410-kilometre Ride of Hope fundraiser on July 3, 2021. (Jenna Hauck/ Chilliwack Progress)

Last year Darrell had plans in place for the Ride of Hope to be a cross-Canada event in honour of the 40th anniversary of the Marathon of Hope, but due to the pandemic, it was put on hold. When the time comes for that cross-Canada ride to happen, people in the riding community will be ready.

There are cyclists riding on Saturday who are planning on riding with Darrell across Canada when that ride does take place, Ross said.

Monday (June 28) marked 40 years from when 22-year-old Terry died, just one month before his 23rd birthday.

But if Terry were here today?

“I think he’d be pretty proud of all those that continue what Terry started in 1980. It’s all about trying your very best. Every dollar counts in the fight against cancer,” Darrell said.

People can still join the Fraser Valley Try Like Terry Team, and folks can ride for the entire 410 kilometres or join them at one of their rest stops along the way. To register, go to terryfox.org/terry-fox-ride-of-hope. Additionally, people can donate to the team via the same site.

As the Titanic decays, expedition will monitor deterioration

Masks recommended on transit across B.C.