Newlyweds Tim and Stephanie Lamb did a walkthrough of their condo at Murrayville House in May, and were hopeful they would be able to move in two weeks later, before the birth of their first child.

Now, in mid-September, the couple still hasn’t been given the necessary paperwork to take possession of the unit and are living at Stephanie’s parents’ house with their three-month-old son.

They originally bought the condo in March 2016. The closing date when they purchased was to be July 31, 2016. They had been told the project was delayed, and that the latest date they would be able to move in would be October, 2016.

“It’s been a lot of stress,” Stephanie said. “It’s just put our life on hold a little bit.”

One of the most frustrating parts is the lack of communication between the developer and the owners, she said.

“Unfortunately, Newmark hasn’t even sent out a newsletter or any information to the purchasers. Even since they were in the news they haven’t reassured us of anything, which was really disappointing.”

The Lambs have been able to get a hold of a person involved in finances with Newmark to get some information, but they had to track that person down themselves.

“He was nice, he just let us know there are a few more legalities that they are trying to sort out with their financial situation before we can get our ownership,” Stephanie said.

On Monday, the B.C. Superintendent of Real Estate issued an emergency order, calling for principal owner Mark Chandler, of Newmark, to stop promoting the project, place all deposits in trust, and file a new disclosure statement.

Chandler has been facing legal issues related to developments throughout B.C., dating back to to the early 2000s.

Lawyer Grant Sutherland, of Sutherland & Company who is representing Chandler, called the Times because Chandler, “wants to get our side of the story out there.”

“Our number one priority is to get the units to the buyers. We know they have suffered huge hardship,” said Sutherland.

“But there are three things preventing us from getting those units to buyers.”

Forclosure action has been taken by the lenders of Murrayville House, which has been sitting empty for 18 months. There are liens against the property for unpaid trades.

“The Murrayville House had cost over-runs. The Chandler Company has not been able to pay its lenders,” said Sutherland on Tuesday.

“A civic claim has been filed against the Chandler Company and the Superintendent has issued an emergency order that prevents us from completing the sales.

“The disclosure statements we have submitted have been denied every time.”

In the meantime, Murrayville House has been spared from the auction block.

A payment of $21,848.50, representing the delinquent portion for 2015 property taxes, was made to the Township by ‘an interested party’ just before the deadline for advertising the sale on Thursday, Sept. 7.

As required by the Local Government Act, the Township must sell, at tax sale, all properties for which taxes have not been paid for three years.

With only two years’ worth of taxes now outstanding, the property will be kept out of this year’s tax sale, to be held on Sept. 25.

The news comes as some relief to people who have put down deposits or own a unit in the building and have so far been left in the cold.

A friend of one woman who bought a unit in Murrayville House said she has been living a nightmare. She is paying a mortgage and has to store furniture.

The woman bought the unit as an investment and has lost thousands in potential income while the whole complex sits empty.

The last information she received was that the closing process was delayed because of outstanding legal issues.

Newmark Properties opened an office at Willoughby Town Centre and still has an active website, which shows Murrayville House as ‘sold out.’ The Newmark website also shows two other developments in the Willoughby area as ‘coming soon.’

These are the Willow, offering 138 three-bedroom townhouses and Grace, offering 100 one- and two-bedroom condos.

According to Sutherland, those two development projects are proceeding.

On Thursday, after the Times’ press deadline, Ramin Seifi, manager of engineering and community development for the Township, said one of those developments has been sold to another developer and that the project has just been submitted to the municipality.

Seifi said no other projects have been submitted by Newmark to the Township aside from the Murrayville House. 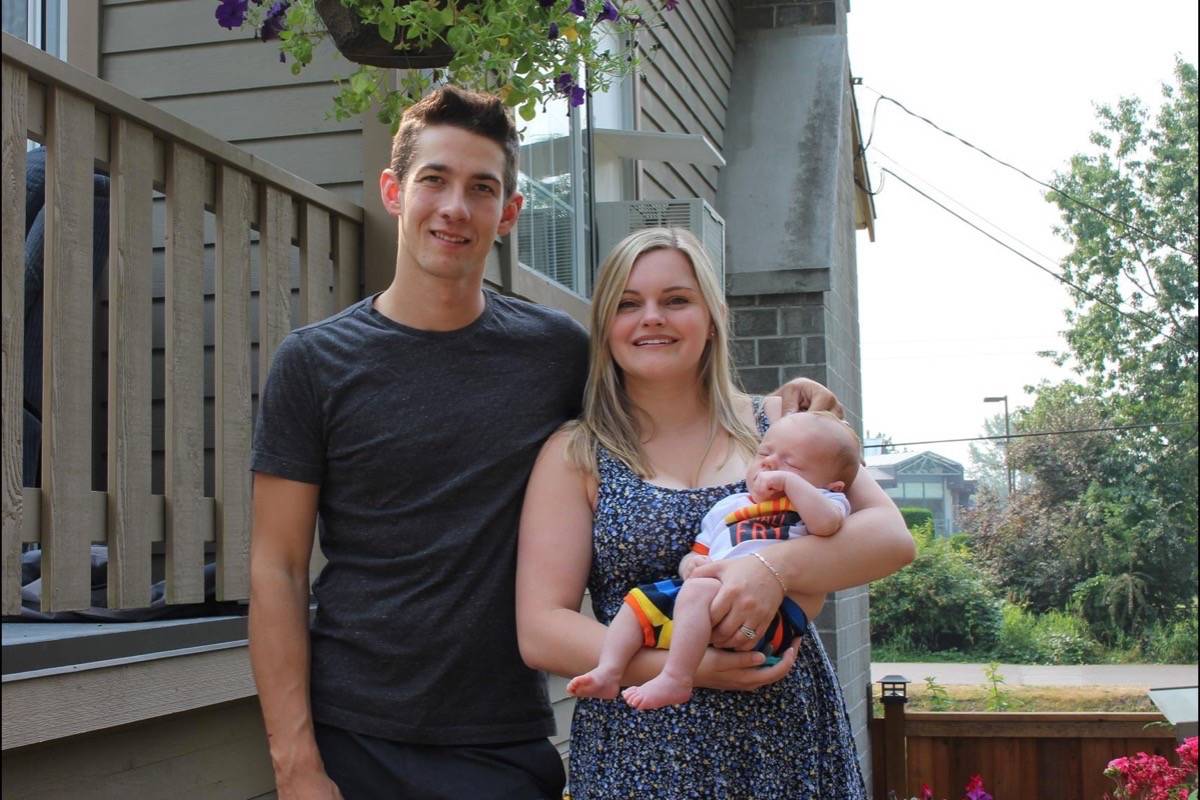 Tim and Stephanie Lamb were hopeful that they would be moved into their condo at Murrayville House before the birth of their first child three months ago. Submitted photo

Blinding sun may have played role in bike-car crash on 64 Ave.