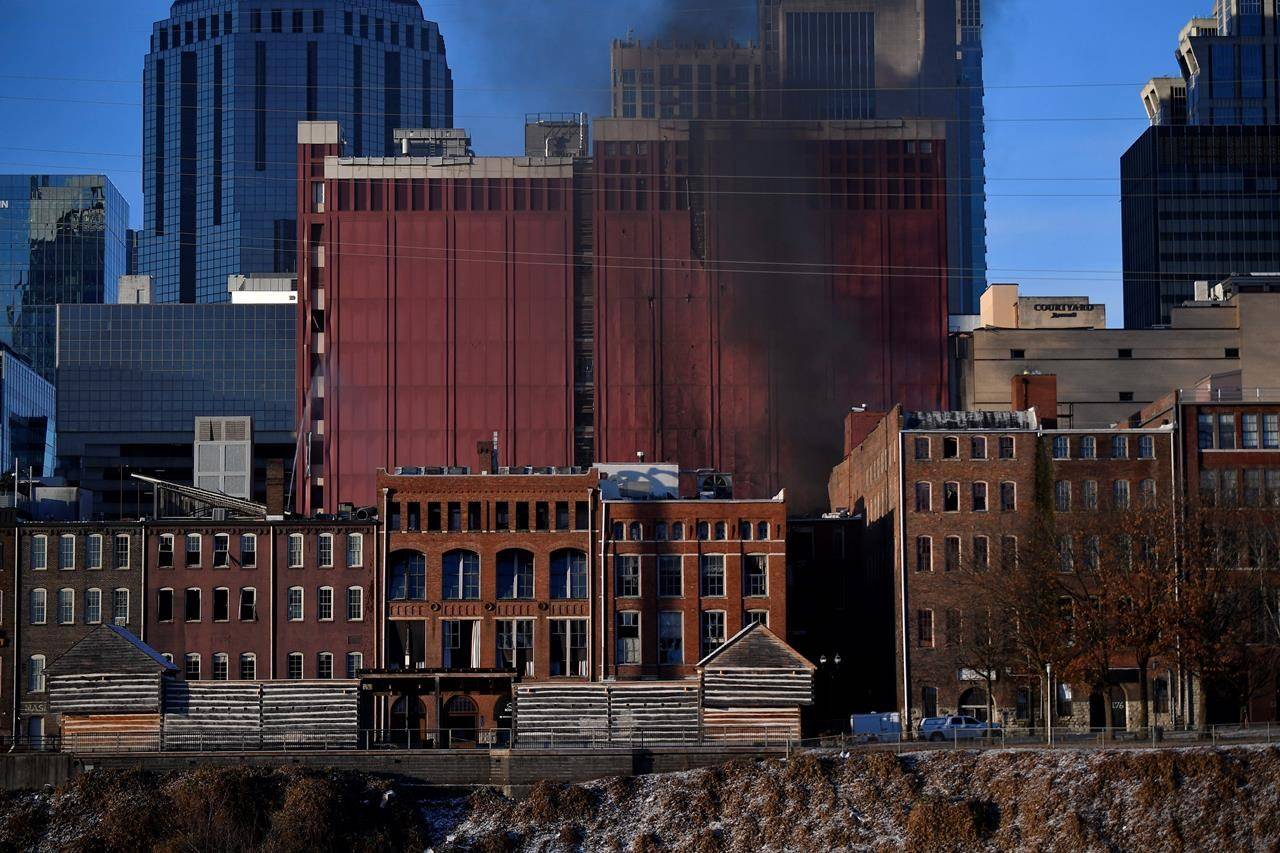 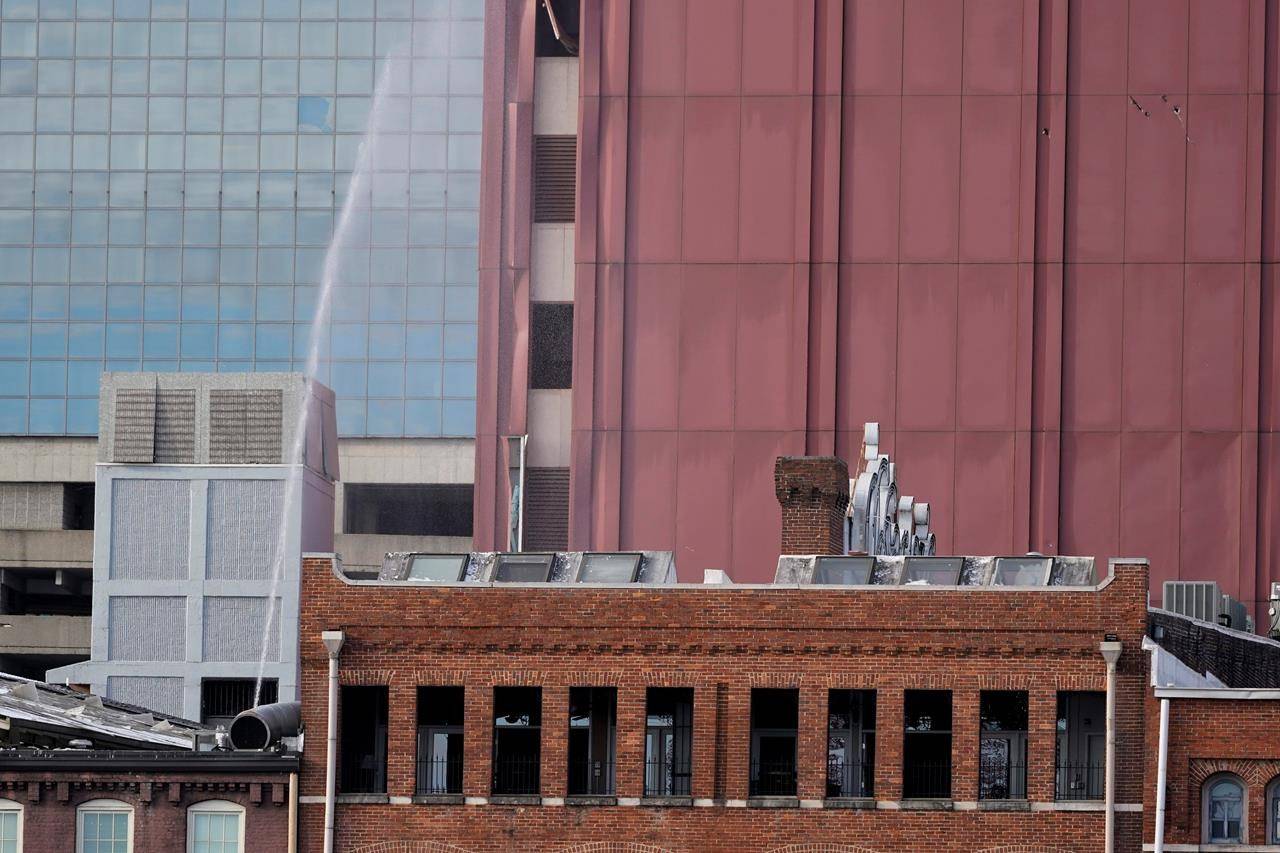 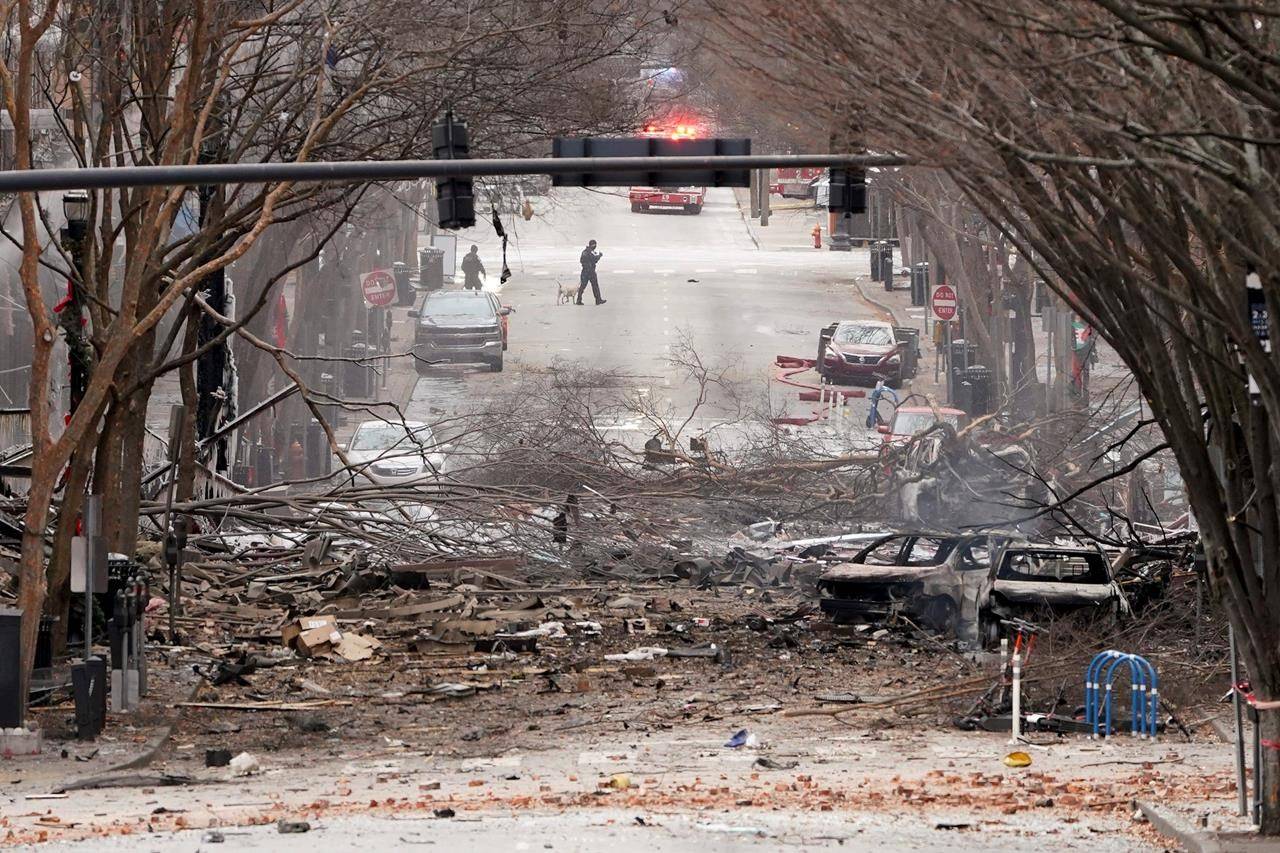 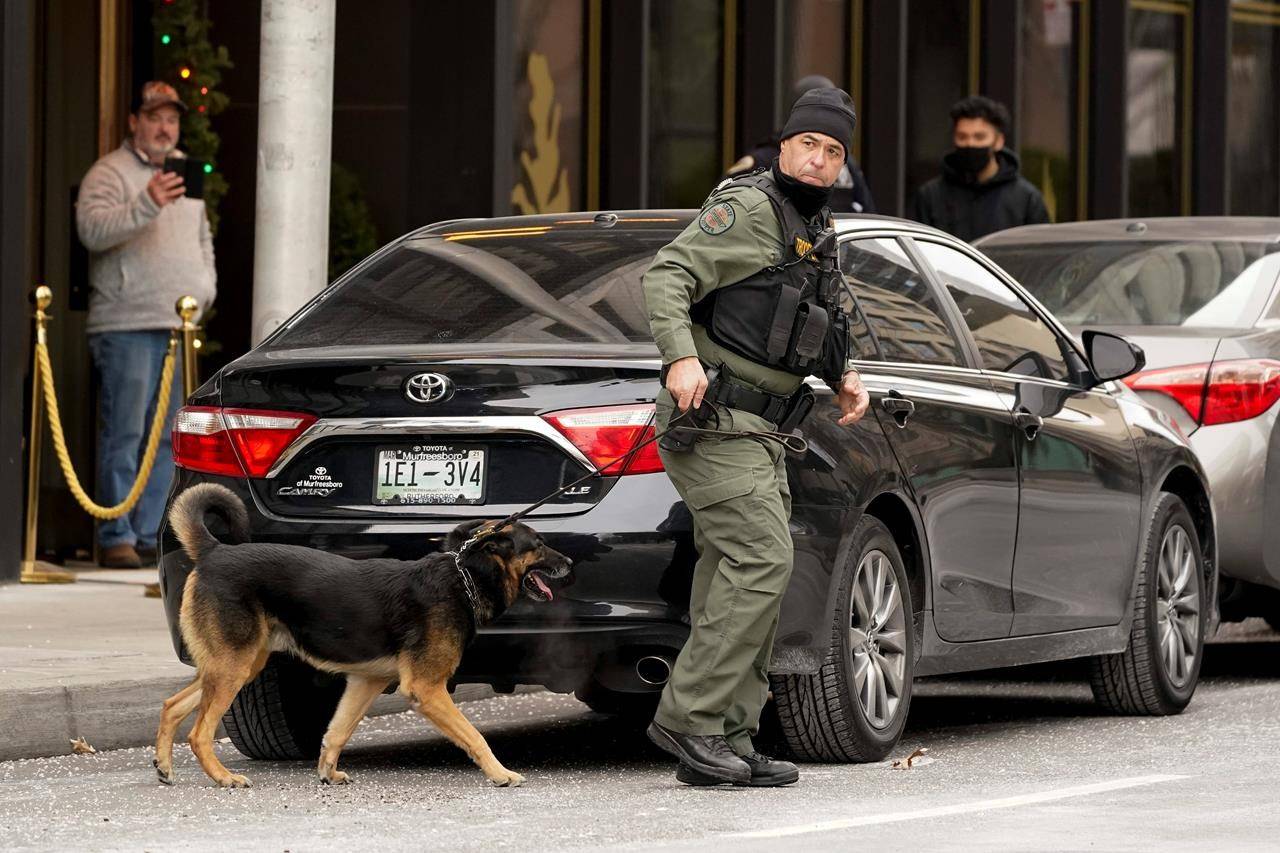 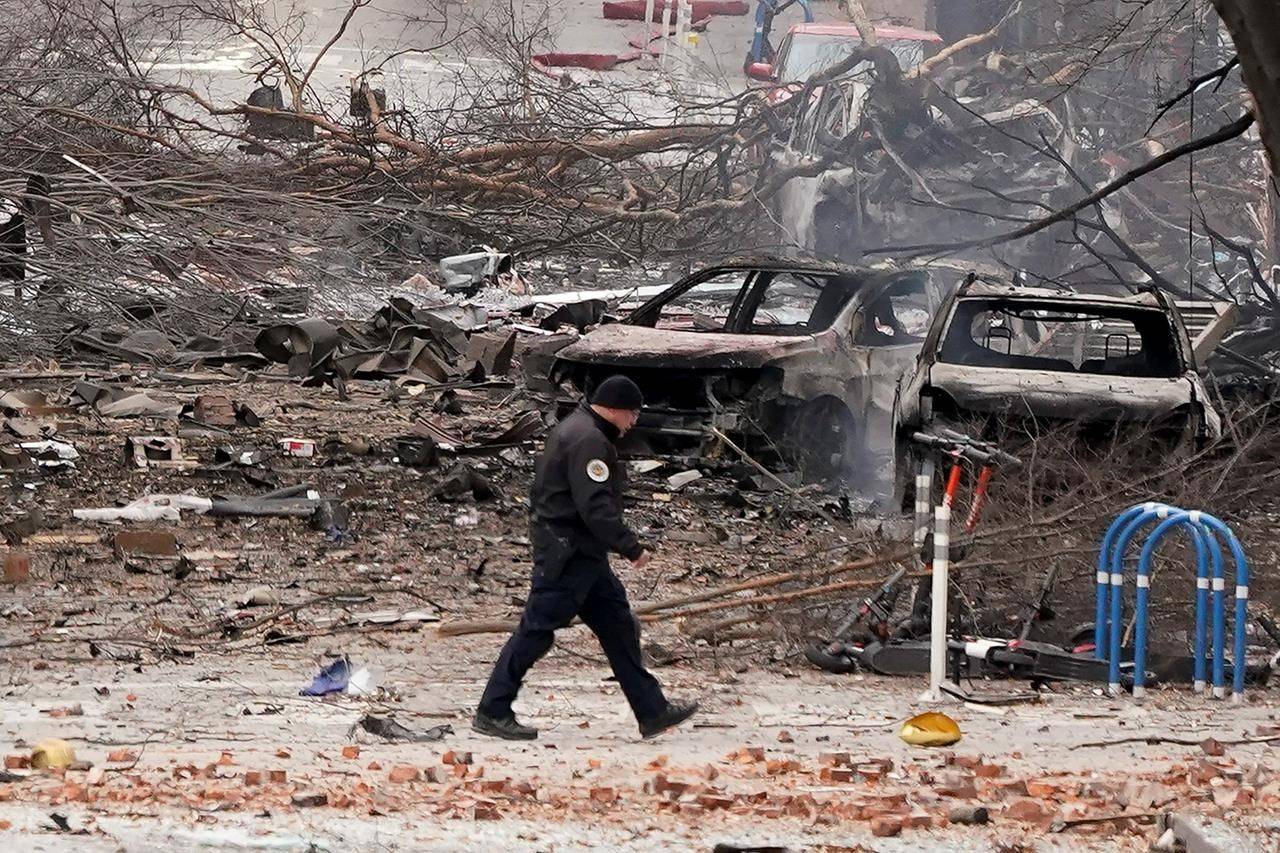 Police were responding to a report of shots fired Friday when they encountered the RV blaring a recorded warning that a bomb would detonate in 15 minutes, Metro Nashville Police Chief John Drake said. Police evacuated nearby buildings and called in the bomb squad. The RV exploded shortly afterward, Drake said at a news conference.

“It looks like a bomb went off on Second Avenue,” Nashville Mayor John Cooper said after touring the site. Cooper issued a state of emergency and a curfew for the area.

Police did not immediately indicate a possible motive or the target.

Human remains were found in the vicinity of the explosion, two law enforcement officials told The Associated Press. It was unclear how the remains were related to the explosion or whether they might belong to the person believed to be responsible or a victim. The officials could not discuss an ongoing investigation publicly and spoke to the AP on condition of anonymity.

Surveillance video published on a Twitter account Friday that appeared to be across the street from the blast captured the warning issuing from the RV, “… if you can hear this message, evacuate now,” seconds before the explosion.

The blast sent black smoke and flames billowing from the heart of downtown Nashville’s tourist scene, an area packed with honky-tonks, restaurants and shops. Buildings shook and windows shattered streets away from the explosion near a building owned by AT&T that lies one block from the company’s office tower, a landmark in downtown.

“We do not know if that was a coincidence, or if that was the intention,” police spokesman Don Aaron said. He said earlier that some people were taken to the department’s central precinct for questioning but declined to give details.

AT&T said the affected building is the central office of a telephone exchange, with network equipment in it. The blast interrupted service, but the company declined to say how widespread outages were.

“Service for some customers in Nashville and the surrounding areas may be affected by damage to our facilities from the explosion this morning. We are in contact with law enforcement and working as quickly and safely as possible to restore service,” AT&T spokesman Jim Greer said in an emailed statement.

The AT&T outages site showed service issues in middle Tennessee and Kentucky, including Bowling Green about 65 miles (105 kilometres) north of Nashville. Several police agencies reported that their 911 systems were down because of the outage, including Murfreesboro and Knox County, home to Knoxville about 180 miles (290 kilometres) east of Nashville.

The Federal Aviation Administration temporarily halted flights out of Nashville International Airport because of telecommunications issues associated with the explosion.

The FBI will be taking the lead in the investigation, agency spokesman Joel Siskovic said. Federal investigators from the Bureau of Alcohol, Tobacco, Firearms and Explosives were also on the scene. The FBI is the primary law enforcement agency responsible for investigating federal crimes, such as explosives violations and acts of terrorism.

Three people were taken to area hospitals for treatment after the blast, although none were in critical condition, Aaron said.

A Philadelphia man staying in a nearby hotel said that when he heard the blast, he was knew it wasn’t harmless.

“We tried to rationalize it that it was an earthquake or something, but it was obvious it wasn’t an earthquake,” Joseph Fafara said. He said he travelled to Tennessee with his family on Christmas because the state has looser COVID-19 restrictions than Philadelphia.

When he went to look at the damage, police barricades had already been put in place. At noon, police dogs continued to search cars and buildings in the nearby area.

Buck McCoy, who lives near the area, posted videos on Facebook that show water pouring down the ceiling of his home. Alarms blare in the background along with cries of people in distress. A fire is visible in the street outside.

McCoy said he heard gunfire 15 minutes before the explosion rocked his building, set cars in the street on fire and blew trees apart.

“All my windows, every single one of them got blown into the next room. If I had been standing there it would have been horrible,” he said.

“It felt like a bomb. It was that big,” he told The Associated Press.

President Donald Trump has been briefed, according to White House spokesperson Judd Deere. The U.S. Justice Department said Acting Attorney General Jeff Rosen was also briefed and directed all department resources be made available to help with the investigation.

Tennessee Gov. Bill Lee said on Twitter that the state would provide the resources necessary “to determine what happened and who was responsible.”

The American Red Cross of Tennessee announced that it was working with officials to open a shelter for victims.

The autopsy, a fading practice, revealed secrets of COVID-19

RCMP investigating after pedestrian struck, killed on Christmas in Surrey