A stolen Super Save Hydro Vac truck was driven through the front wall of a Langley City auto dealership overnight Wednesday, before bursting into flames and setting the building alight.

Langley City fire crews were called to Vancouver Auto Liquidation Centre in the 20300 block of Langley Bypass around 2:45 a.m. Wednesday.

“When crews arrived they found the vehicle had been driven into the building, and the fire had already spread to the building and was quickly spreading throughout the building,” said City fire chief Rory Thompson.

At around the same time overnight, there was a similar incident in Surrey, where a pick up truck slammed into a building in the 18500 block of 53 Avenue, setting it on fire.

No one was in the burned vehicle when emergency responders arrived. Langley RCMP said it is too early in the investigation to say if the two crimes are connected. However, it is believed the two businesses impacted are owned by the same person, said police.

Township fire crews were called in to assist with the fire in Langley City. In total, there were four engines on scene and 35 firefighters were needed to battle the blaze.

Thompson said the fire caused “a considerable amount of the damage to the building,” including a collapsed roof on western portion of the structure.

Langley RCMP said a person was seen fleeing the scene after the crash. That person hasn’t been located, said Sgt. Alex Mulvihill.

The motivation as to why someone would crash the truck into the building isn’t known at this time. But the driver rammed through the locked gate to get into the business, Mulvihill said.

Once police had determined there was no one inside the truck, the vehicle was towed out of the building.

A section of Langley Bypass was closed to traffic in both directions during the morning commute.

The owner of the business, who was on scene early Wednesday speaking with police, declined to comment on the incident.

The building was so badly damaged it was deemed not structurally sound and was scheduled to be demolished. On Thursday afternoon, the Forensic mobile unit was on scene investigating.

“When the roof came down, some beams were shifted so it hasn’t been safe for us to go inside or near the building,’ said Thompson.

That’s why he was not able to determine whether an accelerant was used in the fire.

A car fire just outside the dealership a few nights prior is unrelated, said Thompson.

In that incident, a dashboard inside a vehicle caught the whole car on fire, he said. 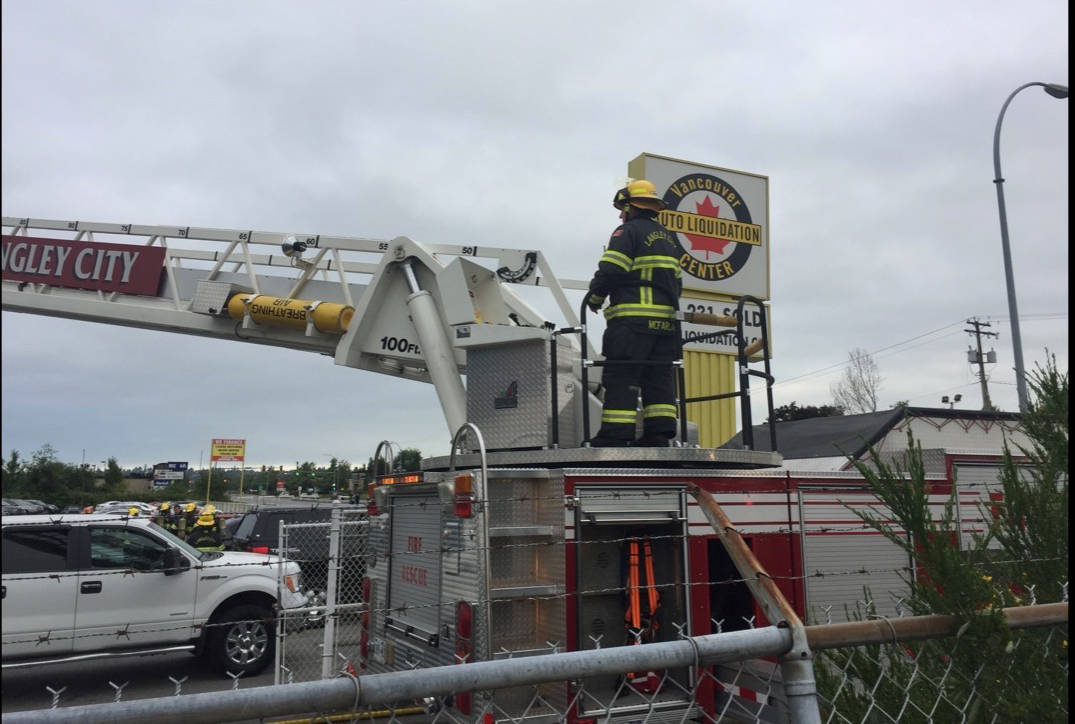 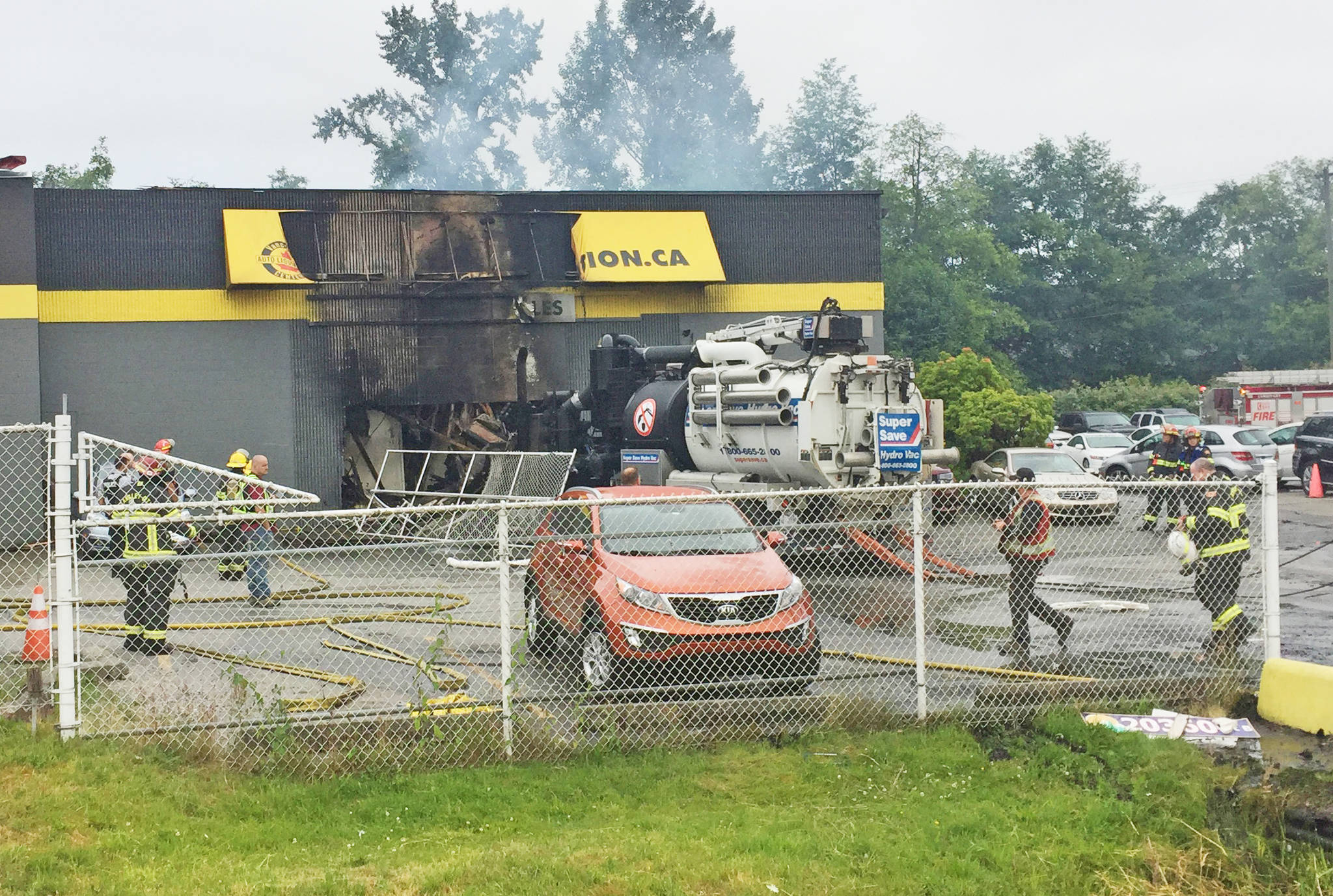 A stolen Super Save truck was driven through the front wall of a Langley City auto dealership overnight Wednesday, causing both the truck and the building to burst into flames. City fire crews were called out around 2:45 a.m. and required help from Township fire department to extinguish the fire, which did extensive damage to the building. Brenda Anderson Langley Times 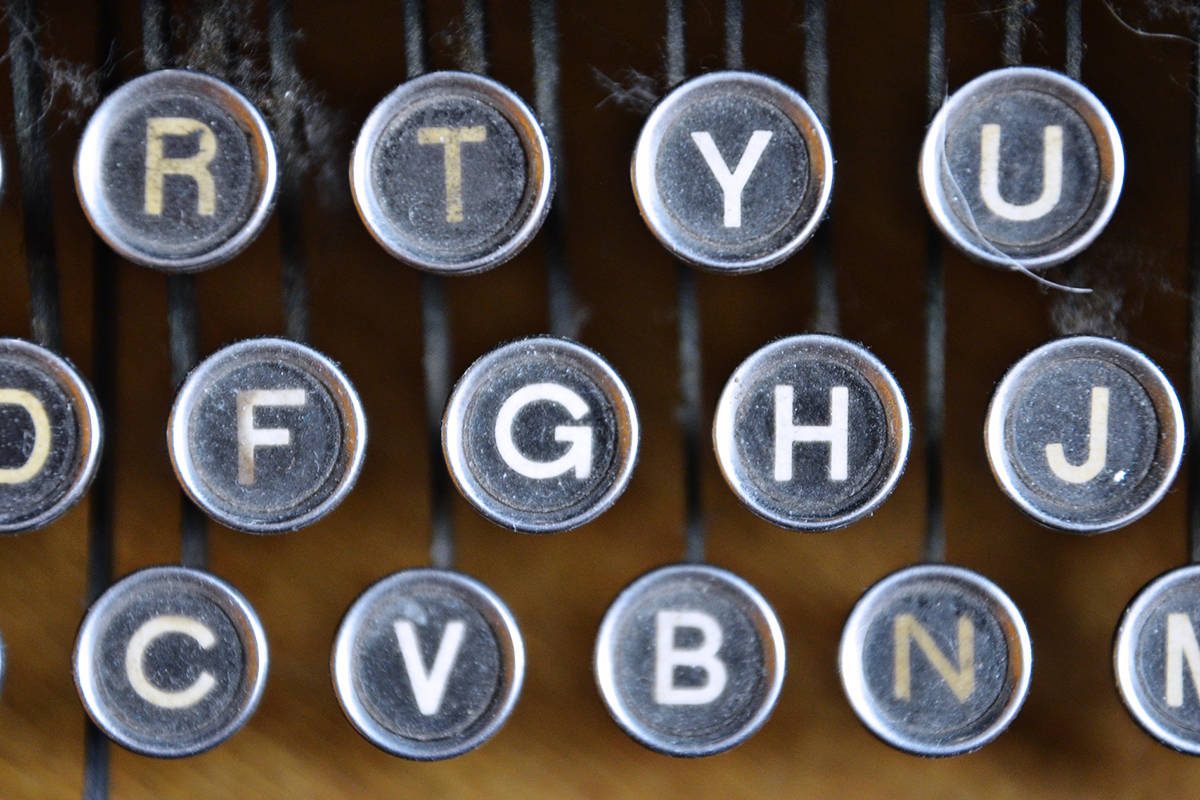