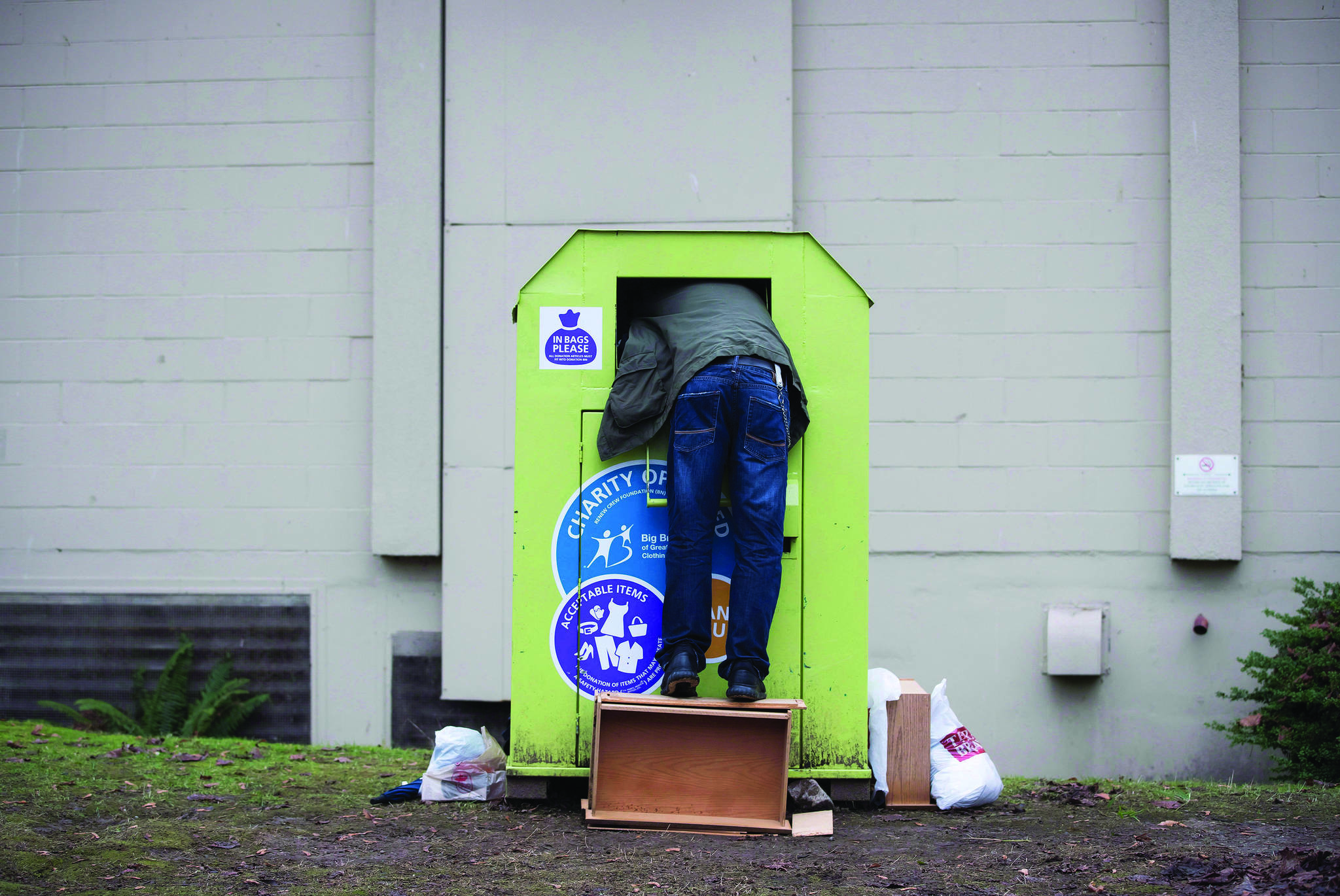 The District of West Vancouver shut clothing donation bins and was looking at options to either make them more secure or remove them following the death of a man on Dec. 30. (THE CANADIAN PRESS/Darryl Dyck)

Organizations in Maple Ridge seem to be finding ways to keep people from getting trapped in clothing bins.

According to city engineer David Pollock, some groups appear to be retrofitting their donation bins or pulling them off the streets voluntarily.

In a summer 2017 report to council, Pollock said staff noted there were as many as eight bins at different locations around the city. However, when bylaw enforcement staff went looking for bins in the city earlier this month, they found only three left.

He said one of the three bins is a different design from those causing fatalities, and one has been removed from public access.

The bins have been responsible for eight fatalities across Canada as people became stuck in them, including the death of Anita Hauck. She was a homeless woman and advocate for people living on the streets in Maple Ridge, and for whom Anita Place Tent City has been named.

The most recent death was a man found dead in a clothing donation bin in West Vancouver in December. That sparked four Lower Mainland municipalities to completely ban the bins, most recently Pitt Meadows.

Leanne Koehn of the Ridge Meadows Recycling Society in Maple Ridge said they are now keeping their bins in a gated area that is patrolled by security at night. She said danger presented by the bins is well known, because of Hauck’s tragic death.

“There’s an awareness now – the bins are in view of the public and the staff,” Koehn said.

Another organization grappling with this issue is responsible for about 300 bins across the Lower Mainland.

The Developmental Disabilities Association has managed to deploy an older design of bin that is safer, while removing all of its new bins.

“We’re in talks with municipalities about clothing bins, but we’ve swapped all the mailbox-chute bins with open-chute bins,” said Kevin Chan, communications manager for the association.

Chan said the newer, more dangerous bins have a “mailbox chute” that is designed to deter theft.

The older design that the association has now put back on the streets is a simple chute, so if people get inside the bins, they can get back out because there are “no pinch points,” he said.

While the association expects some increased losses of donated clothing, Chan said it will readily accept those losses if it means improved safety.

He said the mailbox-chute bins are in storage until a retrofit can be found, and he noted the UBC Okanagan engineering school is working on how to make them safer.

For its part, Inclusion B.C. has announced it will be taking all of its 146 bins out of service until they can be modified and made safe.

“We will continue to work with our bin manufacturer, municipal authorities, design experts and community partners to formalize and promote the adoption of industry-wide safety standards to keep our communities safe,” the organization said in a release.

The B.C. Children’s Hospital has also removed its donation bins. Spokesperson Nuzda Stenner said they are also looking at making them safe.

“Because of the tragedies that have taken place, we have to retrofit,” she said. “So people can’t get in there.”

Stenner noted the hospital has a bin at the Maple Ridge recycling centre, operated in partnership with the Salvation Army, but it is left unlocked, so that anyone who gets inside can get out.