by Ronda Payne/Special to Black Press

Each stands on one side or the other of perhaps the biggest campaign of social awareness on sexual abuse on record.

Unfortunately, it’s not just Hollywood. Issues like these happen right here in the Lower Mainland, too.

The timing couldn’t have been better with a report on the court outcomes of police-reported sexual assaults being released from Statistics Canada just a few days prior – although the data only captures 2009 to 2014.

“Here’s what I take from it. Five per cent of sexual assaults are reported to RCMP,” she said of the data. “My quick math shows of those who commit sexual assault, about one in 320 are committed to custody.”

This only includes acts that would be seen as a crime. These statistics don’t include lewd or suggestive gestures, or explicit or sexual comments. Unfortunately, these non-criminal sexual acts have, as Parsons explained, become “completely enculturated.”

Women are in touch with Ishtar all the time according to Parsons. While awareness of sexual assaults is on the rise, she finds that if anything, there isn’t a reduction in sexual assaults – and there is a greater need for support.

“We are hoping that the government will respond to the demand in this area,” she said.

“We are working with BC Housing… plus we want to expand some of our existing services where demand is just too great for our resources.”

The services Ishtar provides include: transition housing, counselling, provision of basic life necessities, children and youth programs for those exposed to violence in their homes, education in schools and community-based assistance for women with criminal and legal process.

But, much of this work deals only with after-the-fact situations where a woman has already been sexually abused or is at risk.

What Hollywood has helped to reveal is the fact that any woman can be in a situation of risk regardless of her occupation, social status, income or appearance.

Perhaps it could be said that those in Hollywood should have come forward sooner, but as Parsons explained, that’s easier said than done.

“There is so much shame,” she said. “No one deserves to be treated like this. It’s supposed to be a crime, isn’t it? When we look at the stats, it doesn’t look like it, does it?”

Plus, the societal approach is to look at women – the person who has been assaulted. The focus is less on the man who commits the assault. Parsons also mentioned the interrogation style of interview that many women are subjected to upon reporting an assault.

“It surprises me that anyone reports it,” she addded.

Filmmaker and activist Jason Katz has had part of his poignant quote on this exact subject go viral: “We talk about how many women were raped last year, not how many men raped women.”

Further complicating matters is the relationship proximity of a victim to the assailant.

“You’re far more likely to be sexually assaulted by someone you know in your own home,” Parsons explained, adding that 80 per cent of sexual assaults are committed by someone known to the victim.

Statistics Canada points out that “Victims sexually assaulted by someone they knew were far less likely than those victimized by a stranger to see their assailant go to court after a charge was laid (47 per cent versus 64 per cent).”

Perhaps the awareness of sexual assaults and campaigns like #MeToo can raise awareness, but Parsons is uncertain if it can create social change.

“It’s a window in time that puts it on the table,” she said. “It makes it more culturally safe to say ‘this has happened to me’. Secrecy only protects the assailant.”

The place to start, as Parsons outlined, is sharing with other women.

“By sharing, you make yourself matter. All women matter,” she said. “The best way any woman can help themselves is to support other women when it happens. To believe them and for women to tell other women this is happening.”

Parsons added men have a great role to play, too.

“There are all kinds of opportunities for men to interfere with what could lead to a sexual assault in their peer groups,” she noted.

This is as easy as sitting with a female friend who may be vulnerable – such as under the influence of too much alcohol or drugs when others who aren’t known are around. Both men and women can create this buddy-safety system by simply taking a seat next to someone they care about.

At work, or in cases like those in Hollywood, the answers are far from clear-cut.

“I think that the power differential in any relationship makes women more vulnerable, like the Hollywood thing,” Parsons said.

To help continue its efforts, Ishtar is holding a fundraiser on Friday Nov. 17 at the Fox & Fiddle Pub, 19530 Langley Bypass. The event includes a silent auction and draws.

For more information or to buy tickets – which are $20 – for the evening event, people can call 604-534-1011. The money raised goes to support the organization’s program for women and children. 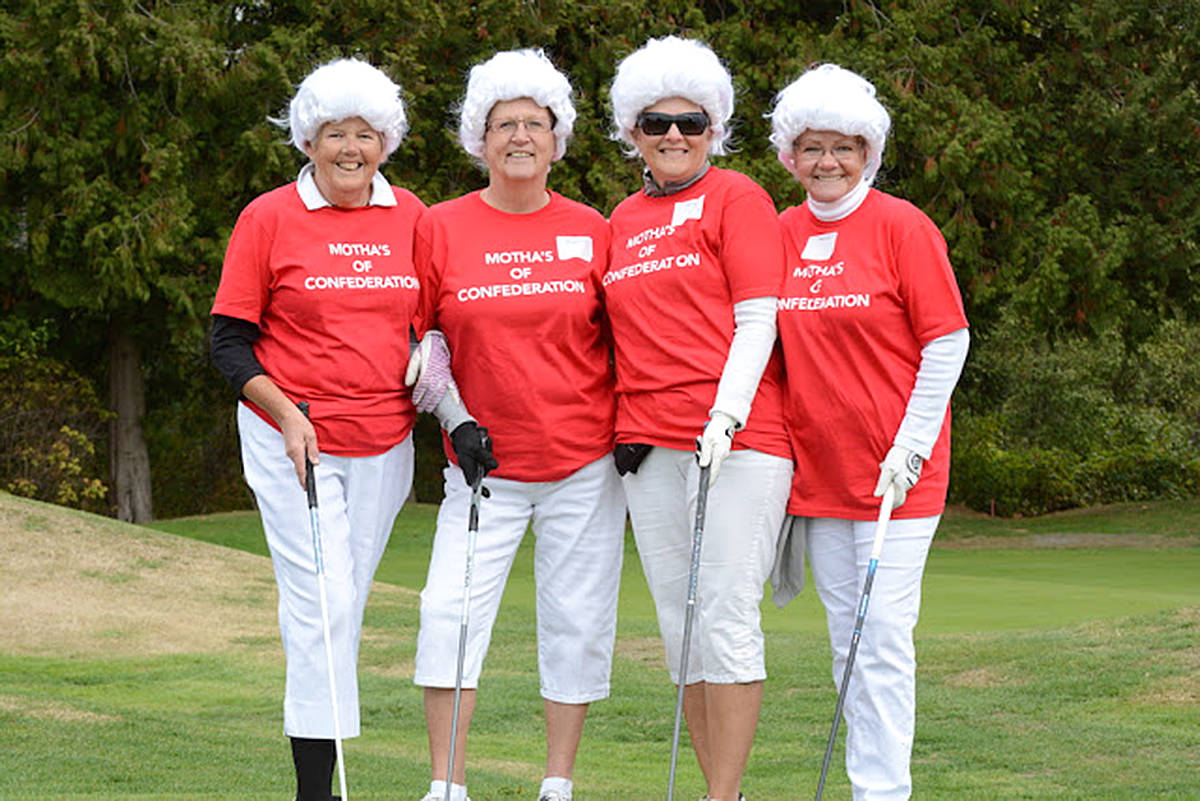 Diane Fru, former owner of Golf for Gals helped coordinate a reunion event when she was approached by former members of the club wanting to get together. Fru and the group have been supporters of Ishtar for personal reasons. “We have a family friend who is a dear, dear woman and she got with this man who abused her,” Fru said. “And after quite some time of abuse she took all five of her babies and went to Ishtar. The whole thing is to raise awareness about it.” While helping out other women, the large group of golfers “had a blast” at the tournament according to Fru. (Special to the Langley Advance)