A plan to remove most of a small forest in Murrayville to make space for 13 new homes is creating a stir among neighbours who hope the stand of trees can be preserved.

At a public hearing in July, four residents spoke out against the 4.29 acre development proposed by Sandhill Homes in the 4400 block of 222 Street, citing concerns about the loss of significant trees and habitat.

This was in addition to 10 written submission that were made, seven of which stated concerns or opposition to the proposal. Two others expressed support for the project. The 10th submission was from the proponent.

The site is made up of two properties, one of which was formerly in the Agricultural Land Reserve, that sit to the south of James Hill Elementary School.

Of the 372 significant trees on the site, five are proposed for retention, and an additional buffer of trees will be left between the back of the school property and the new homes.

A further 92 replacement trees are proposed, along with 41 street trees and 13 buffer trees along the south side of 44 Avenue.

The proposal originally called for 22 homes to be built on the site, but after hearing community feedback at a developer-held public meeting, that was revised to 17 single family homes, and later to 13 homes to match requirements in the community plan. The project also includes pushing 44 Avenue through to 222 Street.

One of the speakers at the public hearing, Ryan Kostyshin, lives to the east of the forest and said he believes that far more than five trees should be saved.

“Those trees have been standing for years. Yes, some have come down and are on the ground, but that’s what happens in a healthy forest,” he told council.

“Yes, they’ll replant trees, and I think the number will be about 150 plus trees at the end. But it will take generations for these trees to mature. In the meantime, residents get to stare at a clear-cut, and deal with the massive changes in our community.”

Kirk Robertson, a resident in Glen Valley and member of the group Watchers of Langley Forests, made similar comments, saying that he believes no policy of tree replacement can replace a forest. He asked for an ecological assessment to be completed, including a wildlife survey, in addition to the arborist report that the developer was previously required to have done.

“We should be talking about the full range of ecological issues, and not just the narrow issue of the health of trees,” he said.

Bruce Stickney has lived behind the development site for more than 19 years. He said the forest has made a huge impact on his family, affording them the opportunity to see coyotes, deer, owls, hawks and many other birds. He is concerned about the number of trees slated for removal, and that traffic in the area will increase with the new road connection.

“It doesn’t seem like it’s the right thing to do,” he said.

Pauline Yokazowa’s home also backs onto the forest. She, too, said that she enjoys seeing the wildlife in the forest, and is especially fond of the privacy the trees create in her backyard.

“I’ve been told that with the new subdivision proposal that I will be having my morning coffee facing a very tall fence,” she said. “All of the trees existing will be gone and they will, I was told, be planting some new ones, but … I won’t see those, my kids won’t see those. How long will it be until somebody can actually appreciate (the trees) once again?”

One speaker, Martha Hansson of Vancouver, spoke in favour of the project. Her family owns one of the two properties included in the proposed development, and she said the community could benefit from more single family homes, especially near the elementary school.

She did, however, suggest that more of a buffer be left between the new homes and agriculture land to the south.

The proponent, Michael Sanderson of Sanderson and Welsh Planning, noted that the new design of 13 lots matches the Murrayville Community Plan. He also relayed to council plans to install six-foot wood fencing to provide screening for existing homes, a bicycle lane on 44 Avenue, and a walkway connection to James Hill Park and the school site.

“We’ve done our very best to minimize the impact and to provide you a very appropriate design solution that is consistent and compatible with the neighbourhood, and we think could benefit in the long run,” he said.

The project’s arborist was in attendance as well and provided more insight on the condition of the forest.

Michael Mills said it is a unique site and that he understands why the neighbours love it.

“I love the forest, too, and I’ve walked through this forest now many, many times wishing I had a different conclusion,” he said.

“Something has happened to this forest. And I do believe at one time in the recent past it probably was a relatively healthy forest, and the biggest indicator of that is the 100-year-old Douglas firs, of which there were about a dozen of them.”

Only about five or six of the Douglas firs are still standing, he said. The rest, which seemed to be perfectly healthy, have recently fallen to the forest floor.

Mills speculates that surrounding construction and development over the years is to blame.

“There is no way for the water to get out … It is quite clear that the trees have suffered from standing water.”

“I don’t see any trees in there that are safe that I would want to live with.” 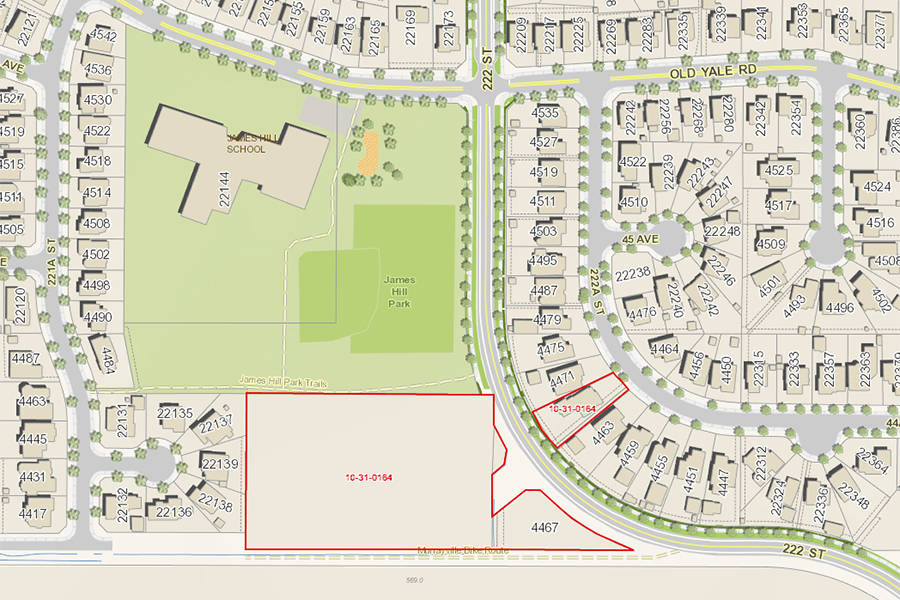 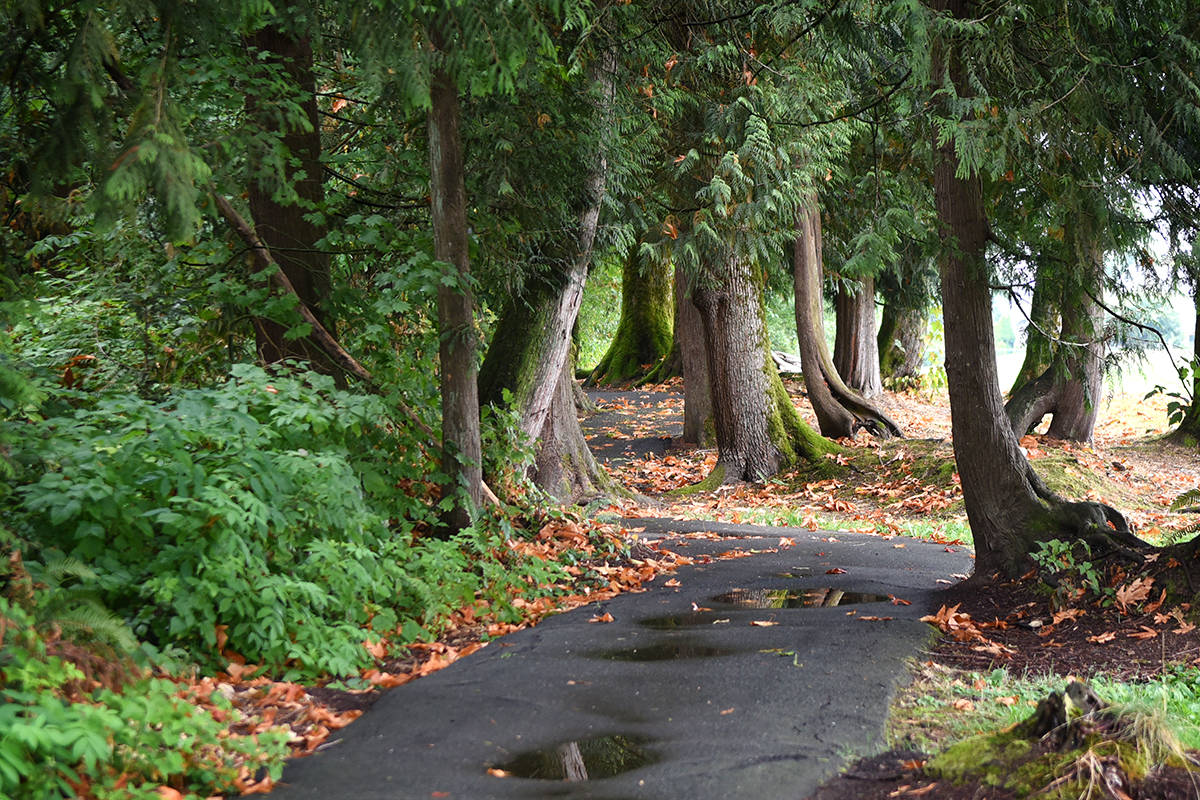 A paved pathway runs along the back of the James Hill Elementary School property beside the forest slated for a new subdivision. The developer has indicated that a buffer of trees will be left along the border with the school site. Miranda Gathercole Langley Times 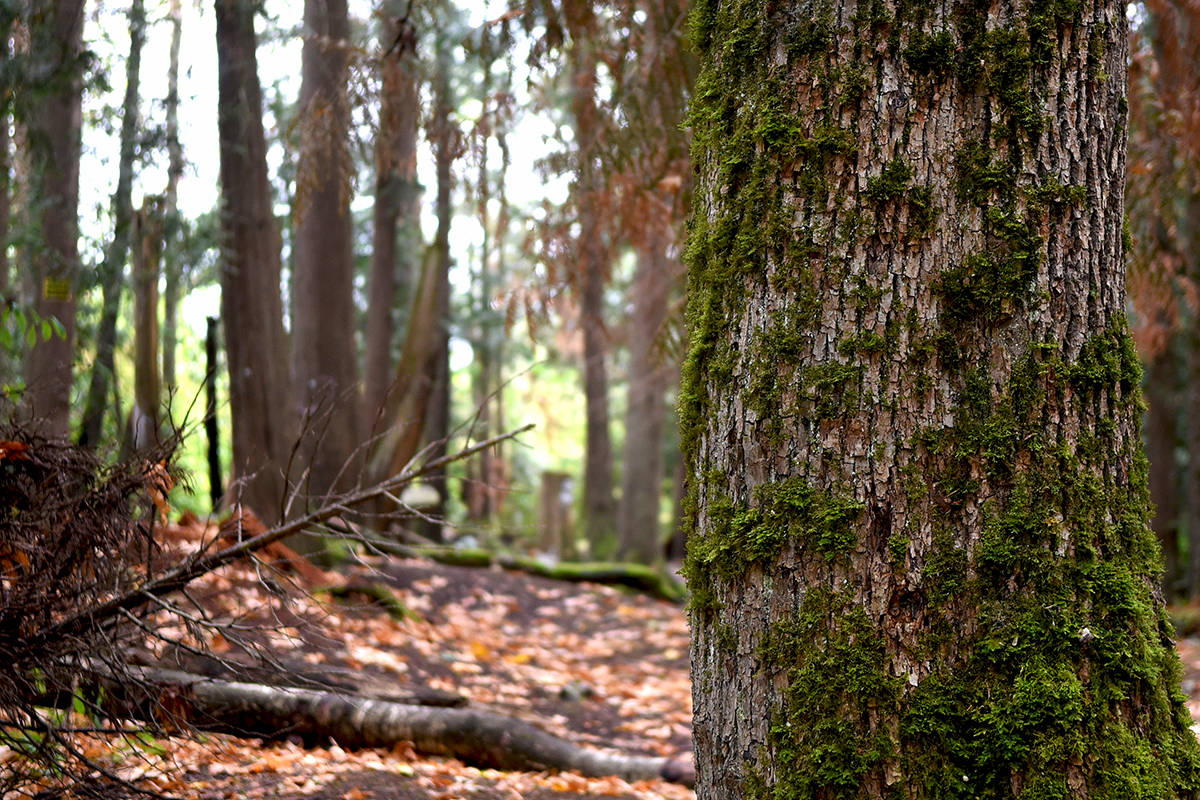 The site arborist claims that he has seen 22 trees fail in the last three years at the forest where a 13 house subdivision is proposed. Miranda Gathercole Langley Times

B.C. sees 25% jump in inhaler use from wildfire smoke