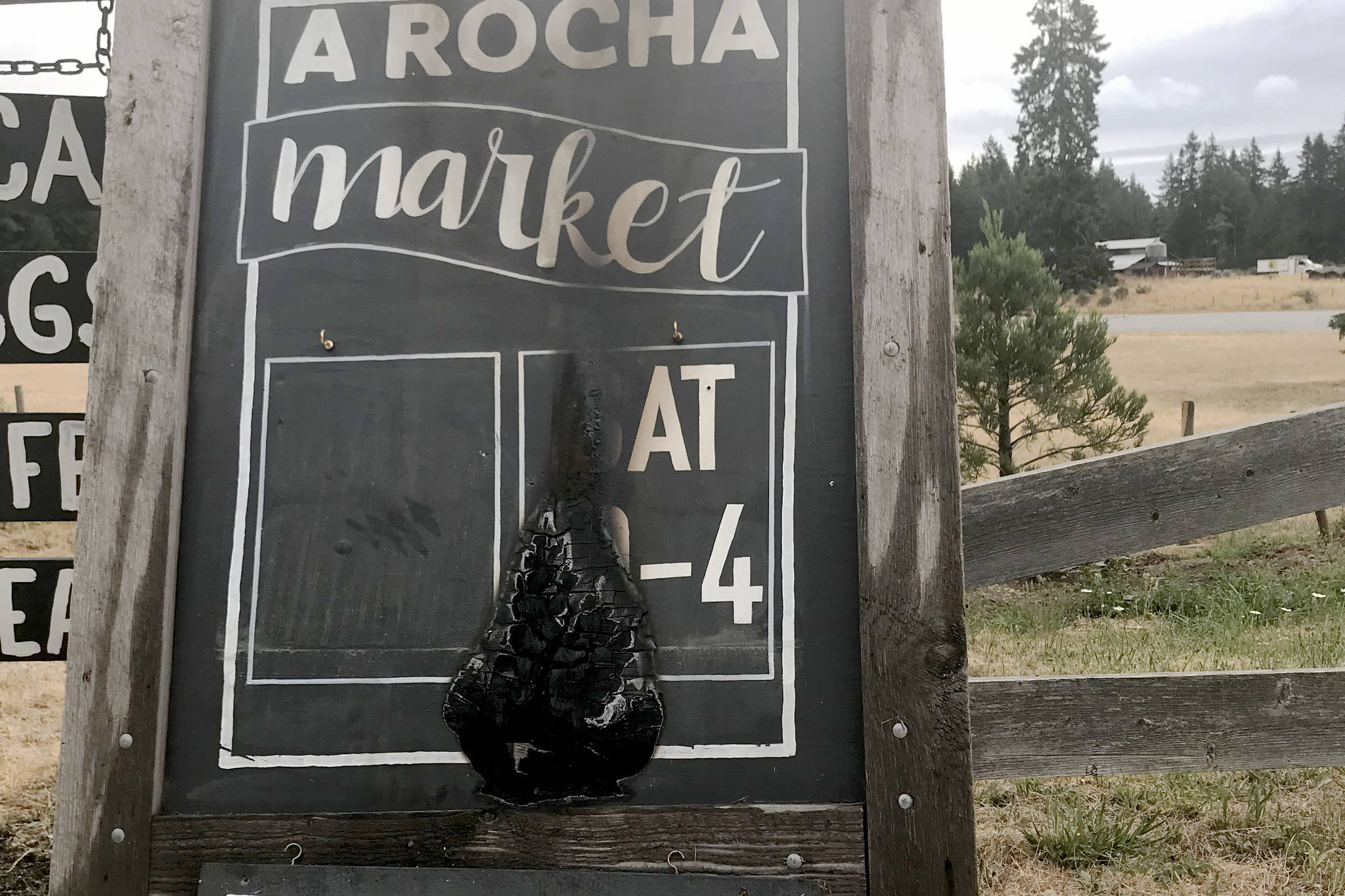 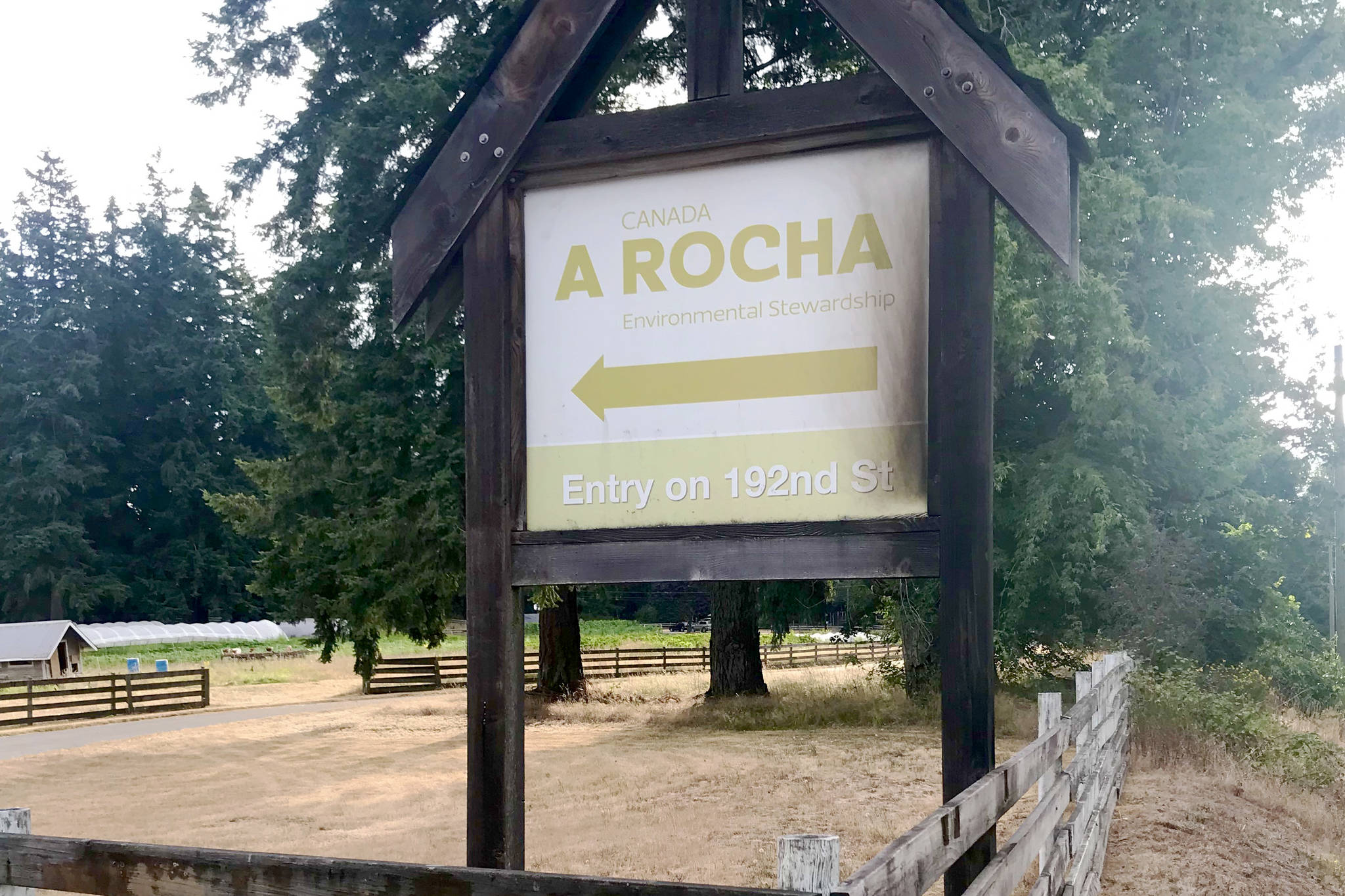 A sign pointing towards the main A Rocha driveway was set on fire early Saturday (July 17, 2021). (Contributed photo) 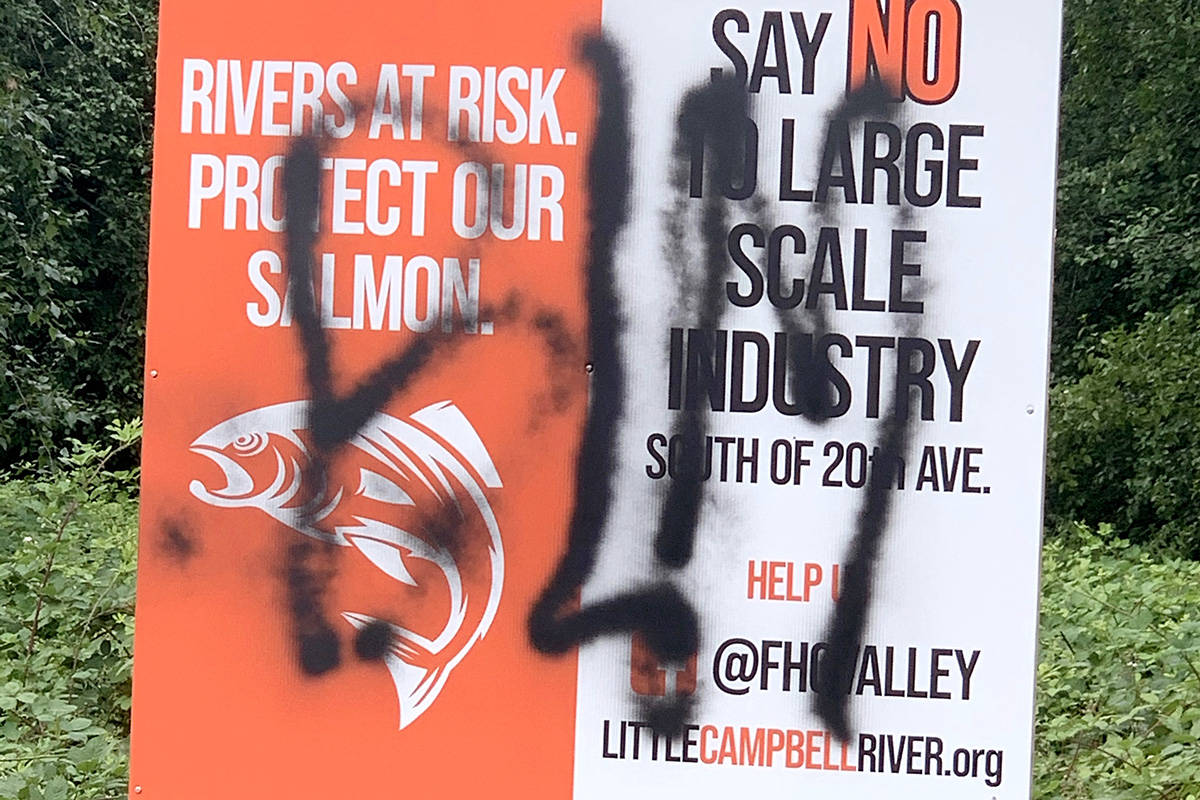 One of two signs erected in support of protecting South Campbell Heights land from large-scale industry was tagged by graffiti, a second was destroyed. (Contributed photo)

A Rocha co-director David Anderson said Monday (July 19) that he and his wife Shauna were woken by police at 6 a.m. with news of what had transpired.

One of the damaged signs was a sandwich board on 192 Street that advertises the centre’s market. That blaze spread into “nine or 10 feet” of the nearby grass field, said Anderson. The second sign targeted, located on 16 Avenue, points motorists towards the 192 Street driveway. Firefighters found it smoldering, he said.

Anderson described the acts, particularly during such a dry time, as “super scary.”

He said he was told if not for the 911 call of a passing motorist and firefighters’ quick response, damage could have been significantly greater.

Anderson said close to two dozen people live in five residences on the A Rocha property. Fortunately, no buildings were damaged and no one was injured.

But steps have been taken to deter further incidents, he said, including an arrangement for night-time security.

Anderson noted that the fires occurred within days of vandalism to two signs that were erected by the Little Campbell Watershed Society to rally support for protecting the South Campbell Heights area from large-scale industry. One of those signs was defaced with graffiti and the other – located in front of the nearby Heritage Gardens cemetery – was “smashed to pieces,” he said.

He can’t help but wonder if the incidents are connected to ongoing efforts by A Rocha and other stewards of the South Campbell Heights neighbourhood to block the City of Surrey from re-designating the land for employment uses.

Six hundred acres are within the plan area, including the 18 acres occupied by A Rocha.

A public hearing regarding it was set for July 26, after council on July 12 approved the draft revised plan, citing a need to boost business opportunities in the city.

Anderson said Monday that consultation on the revised plan has been minimal, with little opportunity for stakeholders on either side to collaborate or hash out differences of opinion, and the concern is that that is causing tempers to flare.

He said Monday that if the fires were set in connection with the land-use plan, “it’s very surprising that someone would be so angry that they would resort to something so dangerous.”

Surrey RCMP Sgt. Elenore Sturko said police are asking anyone with information regarding the July 17 fires to come forward. Call 604-599-0502.